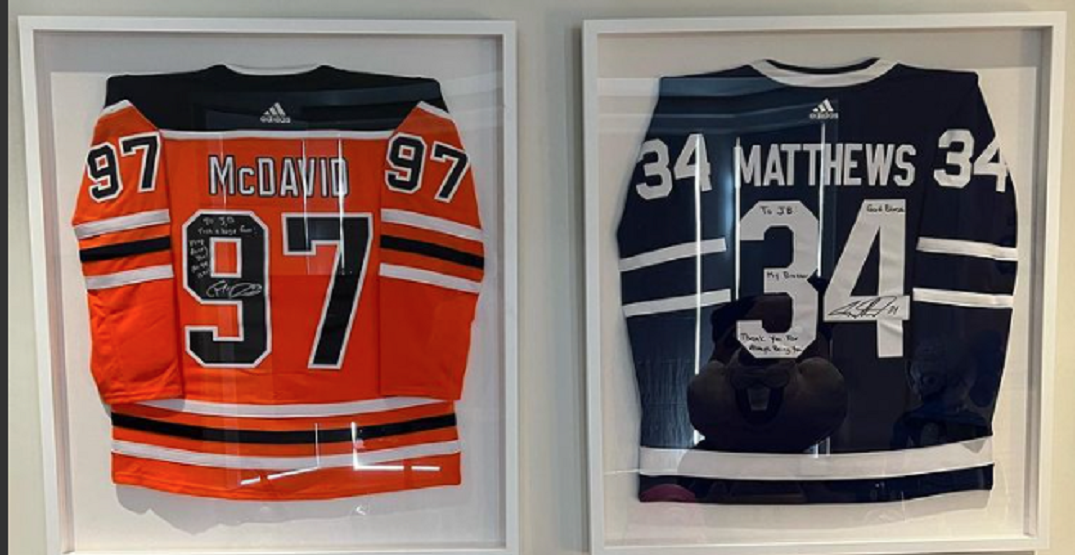 Pop star Justin Bieber has quite the collection of hockey jerseys in his house.

In a photo uploaded on Instagram, Bieber showed off two of the cooler uniforms he’s got autographed jerseys from NHL stars Connor McDavid of the Edmonton Oilers and Auston Matthews of Toronto Maple Leafs.

“Inspired by greatness,” Bieber wrote in the photo’s caption.

It’s hard to make out exactly what the inscriptions for Bieber say, but it looks like Matthews wrote: “To JB: My Brother. Thanks For Always Being You.” while McDavid’s note reads, “To JB: From a Huge Fan!”

Bieber and Matthews have had a long-standing friendship, including hanging out this past offseason at multiple UFC fights. He’s also skated with Matthews (along with Mitch Marner and former Leaf Tyson Barrie) in his hometown of Stratford.

Bieber’s a life-long fan of the Maple Leafs, so it’s only sensible that he’d befriend the team’s biggest star.

But Matthews and McDavid have also developed a bit of a friendship despite their on-ice rivalry, hanging out last winter together in Arizona as well as training together in the offseason.

Maybe it’s only a matter of time before we hear the two NHL stars featured on a Bieber track.