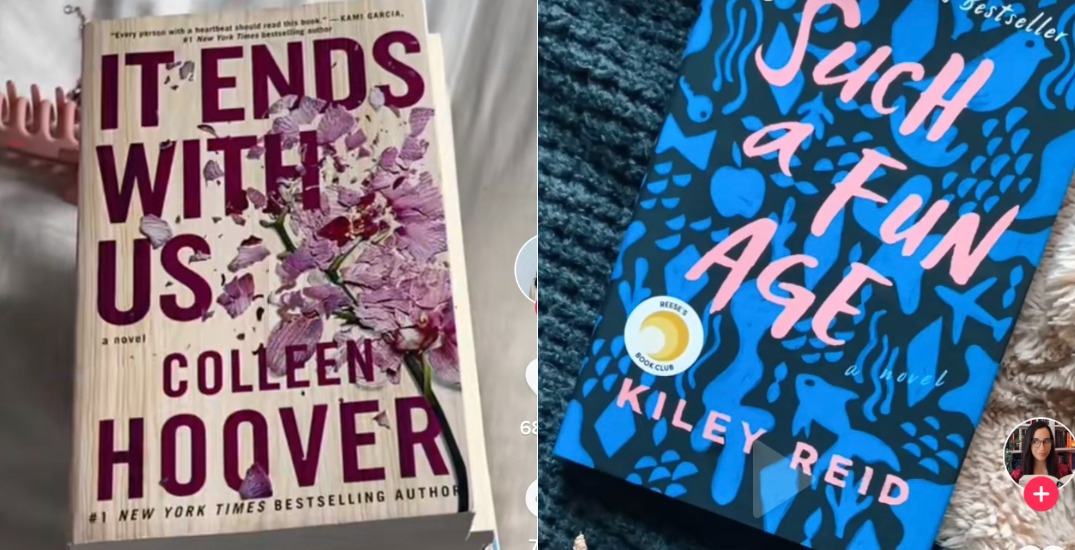 You may be a member of a weekly book club, an international book swap, or perhaps you’re signed up for a monthly book subscription service that fulfills your need to read.

However, when you’re looking for that brilliant new book recommendation, #Booktok is where you’ll find it. The TikTok hashtag has amassed 35 billion views from bookworms around the globe and shows no signs of slowing down.

We’ve done our research, and these are the top 10 books trending on TikTok right now.

It Ends with Us by Colleen Hoover

One of the most popular books in the world right now, Colleen Hoover’s It Ends With Us has held a well-deserved and steady place on the New York Times bestseller list for weeks on end. Lily Bloom is the protagonist in this heartbreaking and unforgettable novel that addresses the realities of domestic violence and generational trauma.

The TikTok world can’t get enough of bestselling author Taylor Jenkins Reid these days, so you’ll be lucky if you can get your hands on a copy of any one of her seven novels at your local bookstore. Her latest novel, Malibu Rising, released last summer, saw the resurgence of her entire collection of books, including Daisy Jones & The Six, a coming-of-age story about a girl named Daisy growing up in Los Angeles in the late sixties.

The Love Hypothesis by Ali Hazelwood

An instant New York Times bestseller, Ali Hazelwood’s sensational romance novel is set in a science lab at Stanford University. The Love Hypothesis is about a fake romance between two scientists, Olive Smith and Adam Carlson. Olive doesn’t believe in lasting relationships, but an experiment leads her to kiss Adam, and before you know it, he’s playing her fake boyfriend. It turns out their little experiment in the lab is more complicated than they predicted.

In Five Years by Rebecca Serle

Manhattan lawyer Dannie Kohan is the protagonist in Serle’s contemporary romance, and she’s just perfected an interview for her dream job and accepted her boyfriend’s marriage proposal. She goes to sleep, right on track to achieve her five-year plan. However, when she wakes, she finds herself in a different apartment, with a different man, five years in the future. An unforgettable love story, In Five Years will captivate you from the moment you start reading. Fans of the author will be thrilled to hear that Serle has a new book, One Italian Summer, which will be released on March 1.

The Invisible Life of Addie LaRue by V.E. Schwab

Starting in France in 1714, The Invisible Life of Addie LaRue is about a young woman who makes a bargain to live forever but is cursed to be forgotten by everyone she meets. Everything changes for Addie when, nearly 300 years later, she comes across a man who remembers her name.

Select booksellers are offering a gorgeous newly released edition of the book that includes six new pieces of art from Addie’s story, a ribbon bookmark, and an exclusive note from the author. The special edition is available from Indigo.

A Little Life by Hanya Yanagihara

A Little Life by renowned author and T Magazine editor Hanya Yanagihara is an unforgettable book that will leave you with tears streaming down your face for days after you have finished. It’s a sensational book with a memorable cast of four that will leave an everlasting impression on readers. The Instagram account has a loyal fan base, some of whom have even had the characters tattooed; others have had merchandise like totes and tees made. Yanagihara’s latest novel, To Paradise, released this month, is said to be just as powerful.

Author Dustin Theo made his debut in November, and it started trending on TikTok shortly thereafter, with readers voicing their rave reviews while trying to control their tears. This one certainly tugged at my heartstrings as I read about the palpable romance between teenage protagonist Julie and her boyfriend, Sam, who passes away. Julie gets one last chance to say goodbye to Sam through magical phone calls, and she falls for him all over again, making it even harder to let go. What would you do if you had a second chance to say goodbye?

We Were Liars by E. Lockhart

Winner of the Goodreads Choice Award for Best Young Adult Fiction, We Were Liars by E. Lockhart has been trending on bestseller lists since its release in 2014. We can’t help but think its resurgence on TikTok is due to the much anticipated announcement of the prequel, Family of Liars. The book is centred on the wealthy, seemingly perfect Sinclair family, who spend every summer sitting together on their private island. This psychological thriller will have you hooked from the very first page.

@alifeofliterature If anyone asks you what happens at the end, just LIE 🌊 #wewereliars #books #booktok #booker #ya #bookclub #bookworm #fyp #4u ♬ everybody wants to rule the world – okhun

Perhaps the most celebrated author of the last quarter, with her latest novel, Beautiful World, Where Are You, Sally Rooney also happens to be one of my favourites. This is the first book of hers that I read. Normal People, which was released in 2018, has since been adapted for TV and is now available on Prime, is a fantastic contemporary fiction novel set in Ireland.

The book centres primarily on two students named Connell and Marianne, both from different class systems. Despite them being from different worlds, the two find themselves magnetically drawn towards one another in their teenage years, and later at Trinity college in Dublin. It’s one of those feel-good books that you can come back to time and time again.

Such A Fun Age by Kiley Reid

An instant New York Times bestseller, author Kiley Reid hit a home run with her debut novel, Such a Fun Age. Alix Chamberlain and Emira Tucker are the two main characters in this searing and unforgettable book. Emira, a young black woman, who babysits for the Chamberlain’s, is confronted one night in the aisles of their local high-end supermarket. Alix resolves to make things right, but while doing so, Emira unearths something about Alix’s past. This page turner will keep you up all night.