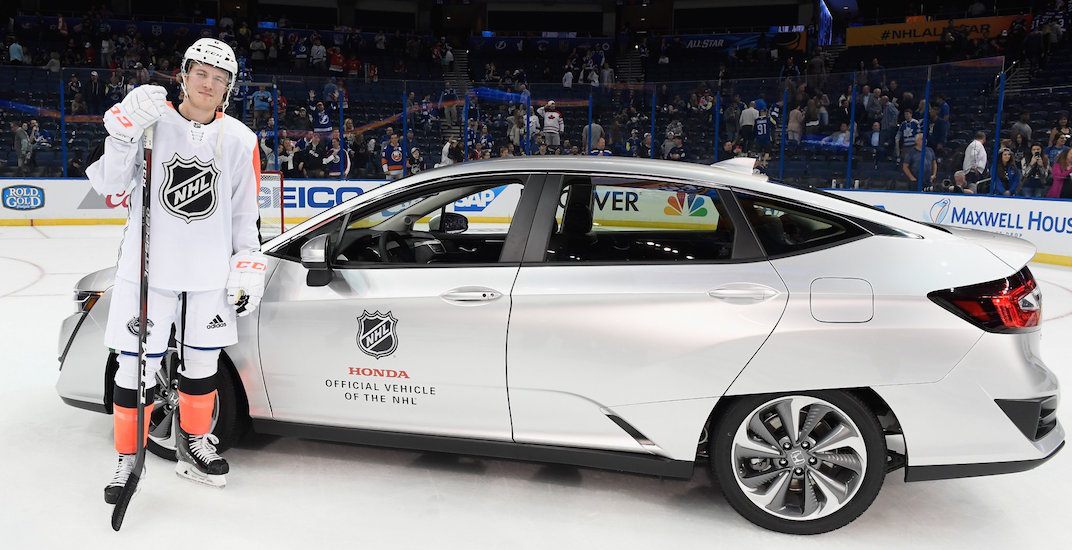 If the rest of the league didn’t know about Brock Boeser, they certainly do now.

“I would have never dreamt of this any time in my life,” said Boeser at the conclusion of All-Star Weekend.

With his beautiful flowing blonde hair flapping in the wind, the Canucks rookie won the accuracy shooting competition (and our hearts) on Saturday. Boeser said he had ‘sweat going down his palms’ before the competition, but you would have never known it.

He followed that up by scoring two goals and an assist on Sunday, becoming the first Vancouver player to ever earn All-Star MVP honours.

“I was pretty shocked,” said the mild-mannered Boeser of learning he won Most Valuable Player. “I would have never expected that, cause so many guys on our team could have got the MVP.”

On Monday, the 20-year-old added another accolade, as the first Canucks player in over three years to be named the NHL’s First Star of the Week.

Recognition is nice, but you know what else is nice?

Boeser cashed in this weekend in a sizeable way, as Vancouver’s favourite prospect and salary cap expert Ryan Biech outlines below:

Boeser made himself some coin from this weekend:

Because of a bonus in his contract, Boeser earned $212,500 before he ever stepped foot in Tampa Bay by virtue of being named to the All-Star Game earlier this month.

By winning a competition at the Skills Competition, he took home another $25,000. The Pacific Division team split a million dollars by virtue of winning All-Star tournament, meaning Boeser received $90,909.

And to top it off, Canucks fans stepped up on social media, helping him earn enough votes for MVP. His reward for that?

Here are the details of the bonuses in Boeser’s contract:

By being named the MVP of the NHL All Star game – #Canucks Brock Boeser earns a $212,500 Schedule A bonus.

He has now earned $637,500 in Schedule A Bonuses (20 goals, Named to All Star Game & All Star MVP) pic.twitter.com/jNPjItvAul

Add that up and he earned over half a million dollars (in American funds), plus a car, in All-Star related stuff.

If right about now you’re thinking “this guy is a professional athlete, he doesn’t need the money” you’re partially right.

Boeser is likely to earn a lot of money in his career, but he hasn’t cashed in on much yet (by NHL player standards). The Burnsville, Minnesota native has just 55 career NHL games under his belt and is on an entry-level contract worth $925,000 per season.

The All-Star bump Boeser got essentially doubled his career earnings – which stand at $581,855 to date.

And yet, he said he’ll probably give the car to his sister.

.@BBoeser16 said he’ll probably give the #NHLAllStar MVP car to his sister.

As if you needed another reason to like him.