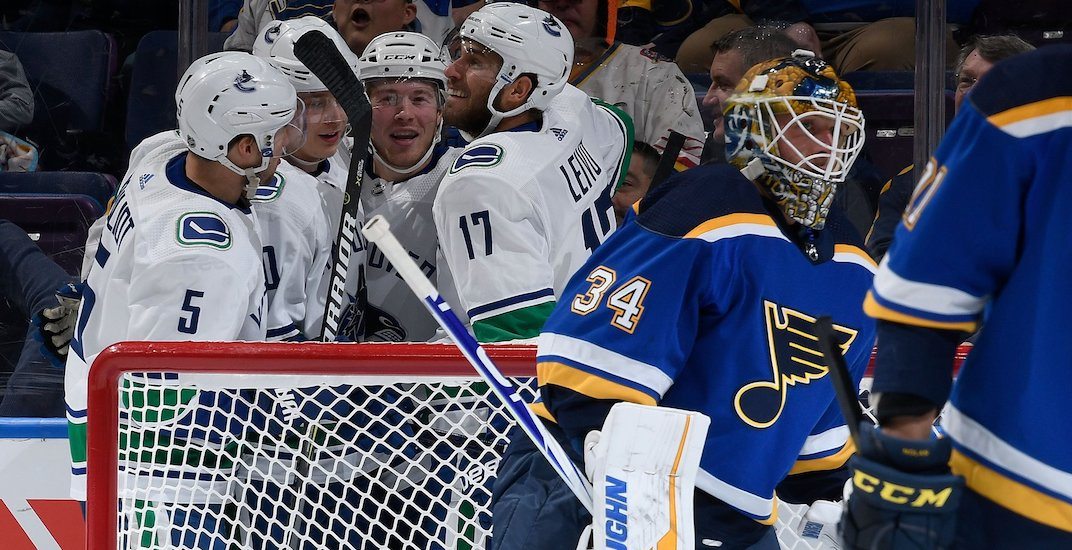 The Vancouver Canucks couldn’t buy a win just a few days ago. Now it seems they can’t miss.

The Canucks blew out the St Louis Blues 6-1 in a Sunday matinee, thanks to two of their brightest young stars.

Boeser’s first goal was a lucky one, as his shot deflected over the net and rebounded off the back glass before hitting goaltender Jake Allen and going into the net.

It was reminiscent of Troy Stecher’s lacrosse trick shot from SuperSkills last week:

His second goal was vintage Boeser. Picking up a pass from Pettersson on a two-on-one, Boeser blew the puck by Allen to give Vancouver a 3-0 lead.

We'll let you all marvel at the dynamic duo that is @BBoeser16 and @_EPettersson. 🥰 pic.twitter.com/6MCvdj3121

Boeser got another favourable bounce on his third goal, as the puck bounced off a Blues defenceman with new Canucks winger Josh Leivo wreaking havoc in front of the net.

All Canucks goals were scored by players 23 years old and under, as Pettersson (20), Bo Horvat (23), and Nikolay Goldobin (23) scored the others.

Pettersson has scored five points in a game twice this season. He now leads the Canucks with 30 points in 26 games.

Despite an injury-plagued season, Boeser now has nine goals in 19 games.

The Canucks have back-to-back wins for the first time in over a month. The second game of their three-game road trip is scheduled for Tuesday in Columbus.