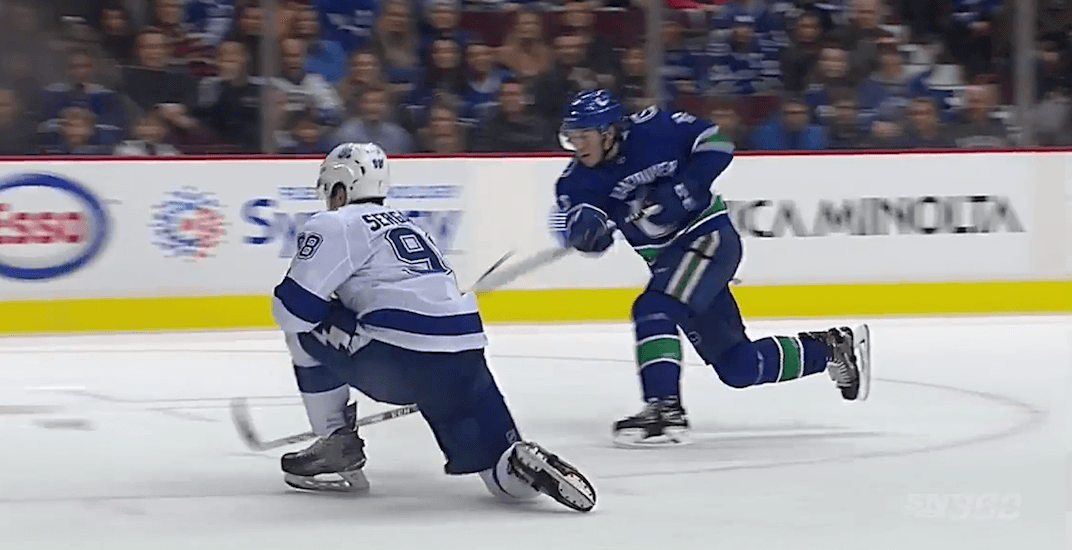 If there’s a reason to watch Vancouver Canucks games these days, it’s because of Brock Boeser.

That was especially true on Saturday, as Vancouver’s rookie sniper was at it again.

Playing against the league’s best team, the Tampa Bay Lightning, Boeser dazzled everyone with a third period goal.

Known primarily for his wicked shot, Boeser picked up an outlet pass from Brandon Sutter and blew by Tampa defenceman Anton Stralman like he was Dana Murzyn standing in concrete. Brayden Point couldn’t catch him, and Mikhail Sergachev couldn’t get into the shooting lane.

And Andrei Vasilevskiy? Well the goaltender who is in the Vezina Trophy conversation this year didn’t stand a chance.

BROCK BOESER POTS GOAL #25 OF THE SEASON, CANUCKS WITHIN 1! pic.twitter.com/2RjJk76GzU

How about one more time in Punjabi?

Boeser also picked up an assist in the 4-2 Canucks loss which kept pace with New York Islanders rookie Mathew Barzal, who he trails by seven points in the rookie scoring race. The Calder Trophy is looking like a two-horse race, with Boeser holding a 10-point lead over Clayton Keller of the Arizona Coyotes, who is third in rookie scoring.