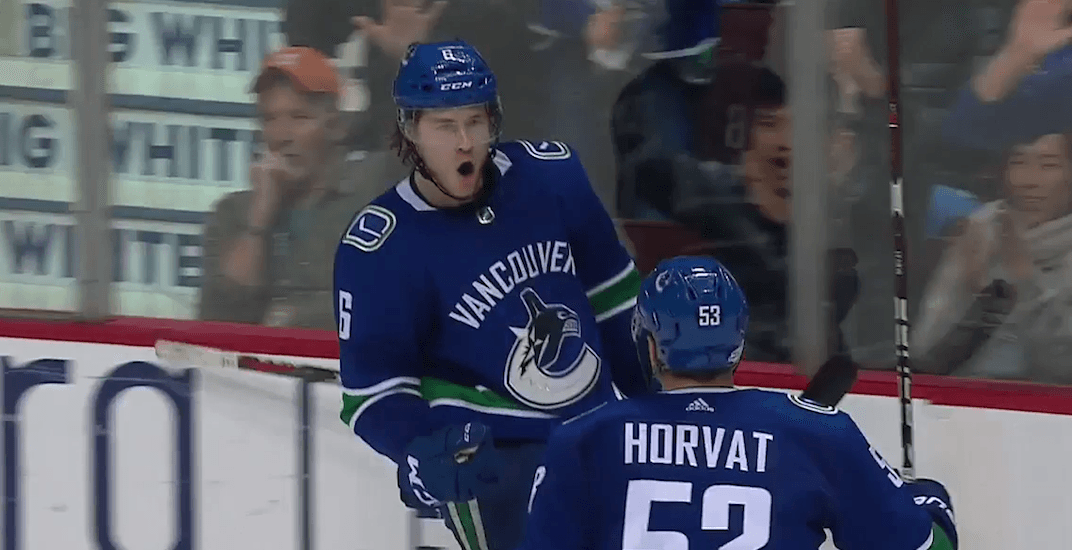 Did the Canucks have a chance of completing the comeback and winning? No, probably not.

But boy, they sure did make it interesting late in the third period.

Truth be told, Vancouver made it interesting all game long, despite what you might think when you see that 4-2 final score for Tampa Bay.

They showed up, they played hard, they generated many many chances.

Shot attempts were 44-32 at even strength over the course of the game, and Vancouver outshot Tampa in each frame as well. Sure, some of that was score effects as the Lightning had a 2-0 lead six minutes into the game, but you have to give the Canucks credit too.

Playing the best team in the NHL, one of the worst could have easily tipped their hat and called Tampa Bay their daddy.

If they had, would you blame them?

But they didn’t. Down 3-0 going into the third, they kept shooting, kept trying, kept putting in the effort. They had a 5-on-3 power play early in the final period where they created more quality scoring chances than they had in December, and even after not scoring there, they kept going.

Finally, mercifully, at the 10 minute mark, Vasilevskiy let one through. And to be fair to him, he didn’t really let it through – but we’ll get to that in a bit.

Then, five minutes later, Boeser showed us something we haven’t seen before: he can do coast-to-coast too.

Here it is. If you could frame a gif and get it signed, this would be the one to use.

I’d tell you to remember it, to memorize it so you can tell your kids about it, but this one will be replayed many times for years to come.

He slipped Stralman and Point before beating Sergachev and Vasilevskiy with the laser.

I mean, you know it was a hell of a goal if it had Boeser fired up.

Stamkos agreed with my assessment of the game when talking with HNIC afterwards:

“I didn’t think we necessarily deserved to even win that game.

“I know we had a quick start, which was great on the road, but that third period – good thing we have the best goalie in the world. He gave us a chance to win that.

“We didn’t play very well in the third. They took it to us and we were hanging on.”

Are you a GM looking for scoring help for your push to the playoffs?

Is your team looking to make a deep run and you know how important depth becomes as the postseason goes on?

Boy do we have the thing for you.

Of course you recognize him – he’s either played for your team or the team closest to you geographically. Still, he’s on pace for a 24-goal, 58-point season and he’s a special teams coach and mentor to boot.

Interested? Send a fax to Canucks management. It’s their preferred method of communication.

(That’s the 1-0 goal where Vancouver “didn’t really beat Vasilevskiy”, btw. Instead they went wraparound on him)

3. The penalty (shot) that ended the dream

Once Brock made it 3-2 with 5:30 left, it really looked as if Vancouver might do it. Then this happened.

Conacher was bleeding after Tanev caught him right on the upper lip. Penalty shot? Double minor? How would they call it?

Turns out the refs wanted the best of both worlds. They called it a double minor but one of the minors was a penalty shot.

Conacher scored, then the Lightning killed off two of the remaining 4:30 on the power play.

Great deal for the best team in hockey, and a call not many have witnessed before.

But what can you do. The comeback was a long shot anyway.

A little insight into that effort from Vancouver.

Before the Canucks finally scored in the third, there was a nice Virtanen chance:

A nice try from Horvat:

And this breakaway from Horvat too.

Meanwhile Markstrom was doing his thing too. I picked this save on one of the leagues’ most lethal snipers – Kucherov – to make my point.

I only showed one of Markstrom’s saves, but he had a bunch of great ones. The goals that beat him – aside from the penalty shot, he didn’t have much of a chance.

Tampa’s first – more traffic than the Alex Fraser Bridge during rush hour, plus Kunitz tipped it.

Tampa’s second – Stamkos threads the puck to Hedman, who catches the puck at full stride before releasing it.

Tampa’s third – did the Sedins switch jerseys with Lightning players, because this is Sedinery, I don’t know how else to describe it.

You already saw that early chance from Virtanen. He started the game with the Sedins and had some chances with them early.

Less than 10 minutes in a game where he was physical and he was creating offensive chances.

A lot of that could be chalked up to some line shuffling that reunited the Triple Bs and moved Vanek to the Sedins’ line.

That left Jake on a fourth line with Dowd and Gaunce, and let’s be honest, only Willie would’ve had that line playing equal minutes in the third.

6. a) The trade deadline blueprint

With the Canucks, or their fans at least, looking to trade Gudbranson and Vanek at the deadline, if you were wondering who might be interested, Bob McKenzie laid out some strong possibilities earlier Saturday.

A couple of random pre-trade deadline thoughts, given the deadline is three weeks Monday: I’ll be keeping an eye on TB and NSH as perhaps the two teams who could/would conceivably make significant moves, given their firm status as legit Cup contenders…

TB, in particular, have a lot of prospects in the pipeline that could also be included in a trade. TB primary desire is for a veteran defenceman; NSH primary target would be a top six scoring winger…

Sure, Tampa Bay and Nashville may not be the ones, but there should be plenty of possible destinations for a depth defenceman or a scoring winger. The point is, if Vancouver can simply make the decision that they are trading the two, the only issue is maximizing the return.

And while “We are trading these players no matter what” may not seem like a great position to be bargaining from, a marketplace where a bunch of teams are on the bubble playoff wise, meaning where there are many buyers, sure is.

6. b) The trade deadline road block

Unfortunately, perplexingly, the Canucks don’t seem to be thinking that way.

I-Mac just said he has a feeling there might not be a ton of activity around the #Canucks come TDL unlike last year, and he’s got a solid feel for what’s going on inside team mgmt.

Imagine a team that has finally said it’s rebuilding, yet doesn’t use this date to its advantage

Omar. The team cannot truly rebuild until Sedins are out of the picture. This is the fact. We just need to go for the high draft pick until that time and if possible make a smart trade here and there.

That’s not true. Honestly, if the Canucks had been fully committed to the rebuild from year one or even year two of Linden and Benning’s time in charge, things would already be looking different. They would have been more aggressive at trade deadlines compiling more draft picks and more prospects, and they would not have spent big money on guys like Miller and Eriksson.

That cap space could have been used in trades to stockpile even more futures, and with or without the Sedins this team would be much further along on the rebuild path.

This take some ahem gumption, but Linden should follow The Hoodie’s lead & don’t be afraid to admit mistakes & move on from them. ie:trade 44 for an asset because you’re not signing him. Manage the assets better. Don’t sign Loui Ericksson types to stupid deals. Don’t extend 44.

While some have just had enough.

Honestly, who’s voting no to this?

Would you trade the #Canucks 2018 first round pick (as long as it’s not #1 overall) for Karlsson?

Karlsson, Boeser, Pettersson on one team?

Imagine those three together in 3-on-3 overtime.

Now go back and change your vote, please.