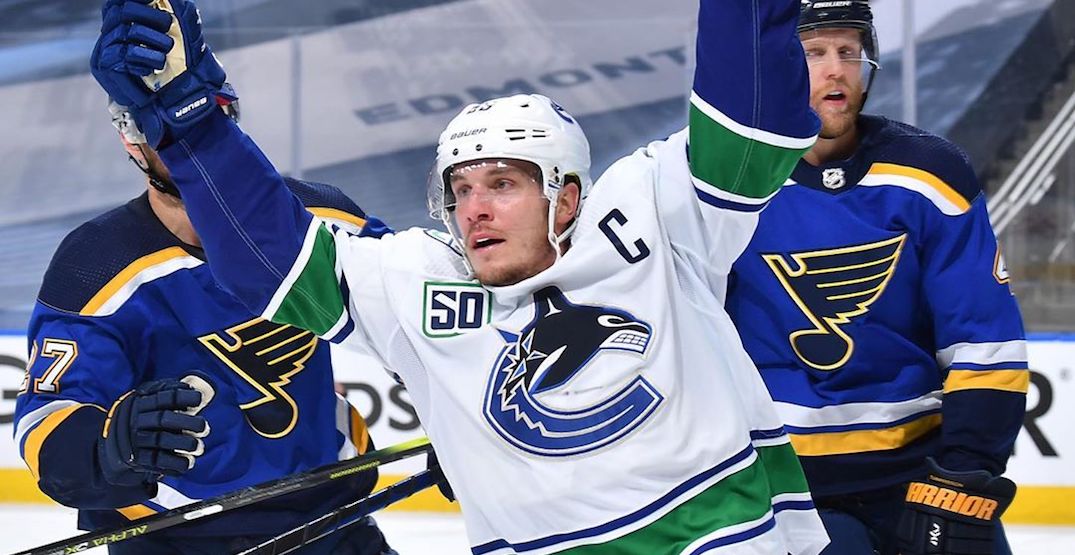 The 2019-20 season was always going to be a special one for the Vancouver Canucks, though nobody could have envisioned this.

The unprecedented season lasted 348 days, including two training camps. It included the team’s 50th anniversary celebrations, highlighted by retiring the jerseys of Henrik and Daniel Sedin.

This season was a special one in particular for Bo Horvat, who was named the 14th captain in franchise history prior to the Canucks’ home opener back in October. The young captain helped lead his team back to respectability, which included a playoff spot and a first-round upset of the defending Stanley Cup champion St. Louis Blues.

On Wednesday, in a letter to season ticket members, Horvat thanked fans for their continued support.

Canucks fans supported the team in large numbers prior to the pandemic, with an average announced attendance of 18,680, which is 99% of capacity at Rogers Arena.

Attendance was zero in the postseason, of course, but that’s where Horvat really shined. The Canucks captain still leads all NHL players in playoff goals, with 10, which included two game-winners.

“Even though this year’s playoffs were played in a bubble, in a different city, with empty stands — we felt your support,” said Horvat. ” The team read your letters and saw the giant sign you painted for us on the ice back at home. It made everyone smile and gave us the extra push to keep going.

“On behalf of the team, we want to thank you again for all your support. It means a lot.” 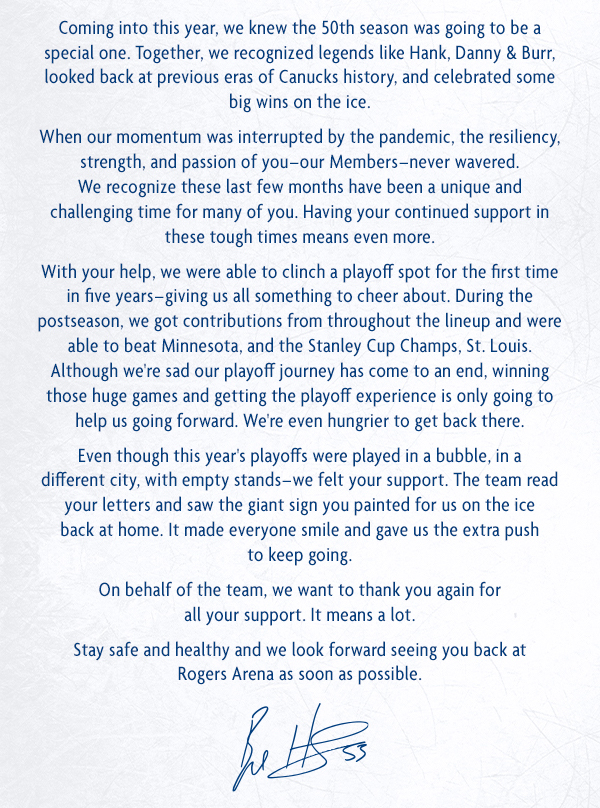 Apart from the official letter to season ticket members, a number of Canucks players have taken to social media to express their gratitude for this season.

“We wanted more this season but thank you Canucks fans for all your support! Can’t wait for next season,” said Elias Pettersson, who scored at better than a point-per-game clip in the postseason, with 18 points in 17 games.

“Playoff hockey is back in Vancouver!” added defenceman Troy Stecher. “It was a great playoff run with a special group.”

“What an experience,” said Brock Boeser. “Thanks for all the support Nucks fans!”

“Thank you to everyone for the support! Just the beginning,” Quinn Hughes said following a spectacular rookie season.

“Not the ending we wanted, but the support from the Canucks fans has been amazing through this whole thing and made it an amazing experience, so for that I thank you,” said Jacob Markstrom, who gave way to Thatcher Demko after suffering an injury in the Vegas series.

“Really fun run from a special group,” added Demko. “Thank you to all the Canucks fans for sticking with us throughout the highs and the lows. We’ll be back.”

“I couldn’t be prouder of our group this year,” Horvat said on Instagram. “We’ve come a long way as a team and the best is yet to come! Big thank you to all the Canuck fans during this crazy year for your continued support. Can’t wait to get things going next year already.”