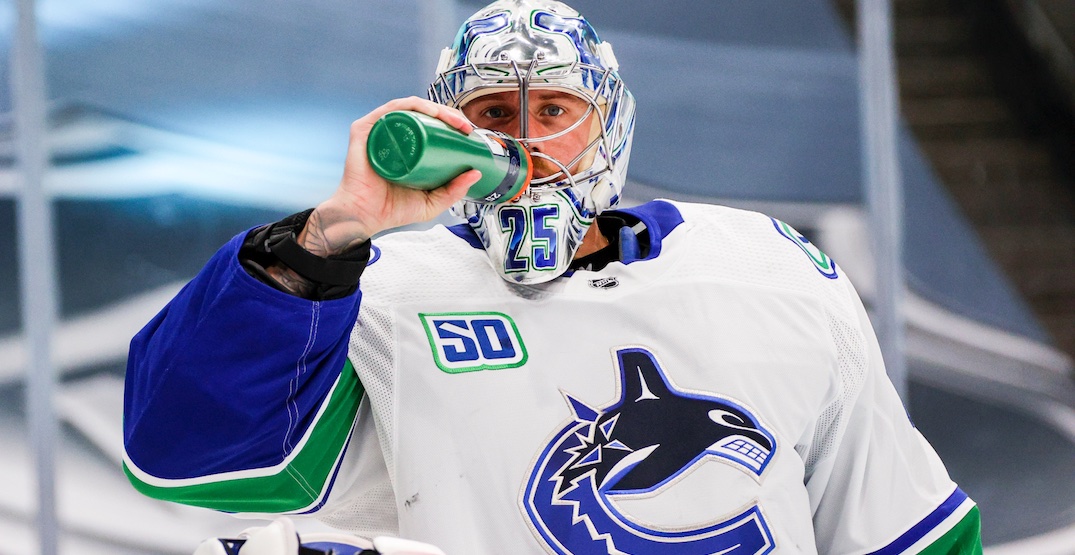 Out of nowhere, there’s a goaltending controversy in Vancouver.

A pending unrestricted free agent, Jacob Markstrom will be allowed to sign anywhere he wants if he doesn’t get a new contract by the start of free agency on October 9. Prevailing wisdom all season was that Markstrom was a top priority for Canucks GM Jim Benning, given that he was the team’s MVP in back-to-back seasons.

But then came an injury to Markstrom in the playoffs, the second significant one of the season for the 30-year-old, and an opportunity for backup Thatcher Demko.

Demko had an up-and-down year during his first full NHL season, but his three playoff starts against the Vegas Golden Knights were so spectacular that he may have changed the conversation. Stopping 123 of 125 shots he faced, Demko may have put together the finest three-game stretch of playoff goaltending in Canucks history — he was that good.

“He was excellent in all three games. He gave our team a chance to win each game… he made a lot of incredible saves,” Benning said during today’s end-of-season media availability. Benning added that Markstrom was back skating and that if the Canucks beat Vegas in Game 7, he may have been available “at some point” during the Western Conference Final.

Benning didn’t make any grand proclamations regarding his goaltending situation, choosing instead to point to the value of having two good options in net. But with a pending cap crunch, he recognized that some difficult decisions would need to be made.

And when it comes to the Canucks’ goaltending situation, they will be forced to choose between their two netminders given they can only protect one in the Seattle Kraken expansion draft, which will take place in 2021, following next season.

“Travis is a big believer in having two good goalies, with the travel schedule that we have during the regular season I believe that we need to have two good goalies,” he said. “It was nice though to see [Demko] get a chance and rise to the occasion. We’ve spent a lot of time with his development as a player and I know Ian Clark has worked really hard with him. So for him to come in and see him play that well I think was good for everybody involved.”

If nothing else, Demko’s surprising play has given Benning options. He could let Markstrom walk in free agency and move on to Demko in a money-saving move to allow the team to spend elsewhere to improve. He could trade Demko after his stock has risen. Or he could hang on to both goalies and defer his decision until a later date.

“It’s nice to have two good goalies,” said Benning, who said he talked to Markstrom’s agent on Monday. “Jacob’s an important guy in our group because he’s a leader. He was our MVP over the course of the regular season. We’re going to try to figure out a way that makes sense for us and makes Jacob and his agent happy to try to figure out a deal to get him signed.

“We want him back. We’re going to start working on that this week.”

In an interview with Sportsnet 650, Benning hinted that he could keep both goaltenders to start next season and move one at the trade deadline.

“We still have time,” Benning told hosts Dan Riccio and Randip Janda. “We could still go into this season with both of them next year. At next year’s trade deadline we could decide to make moves so we don’t lose one of them to expansion. That’s something that we’re going to talk about this week.”

“I’ve got a meeting set up tomorrow with Ian Clark, our goalie coach, and we’re going to go through all that and what it looks like going forward. That’s part of some of the decisions that we have to make here in these next few weeks.”