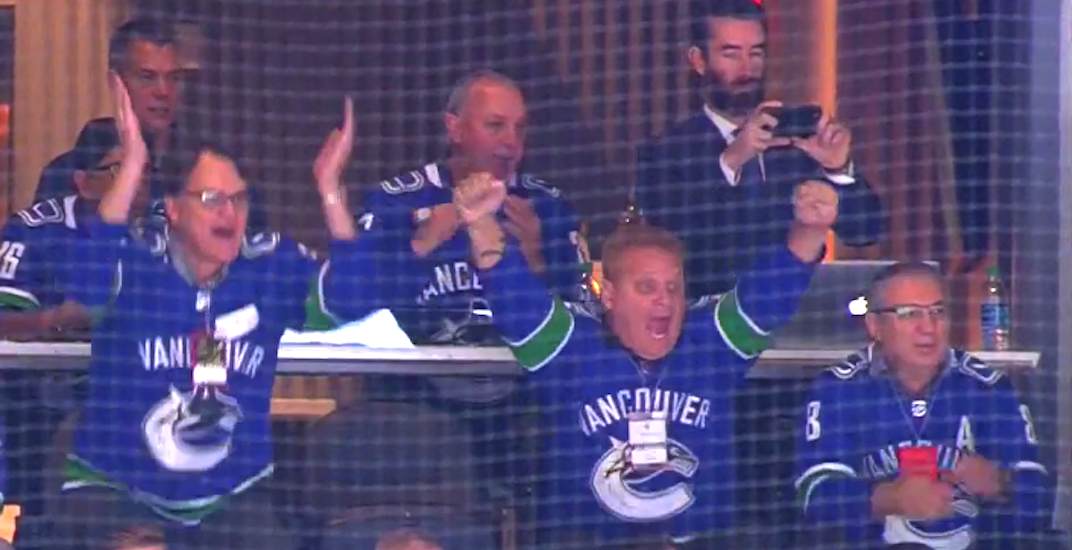 The players’ fathers are on the Vancouver Canucks’ current road trip, which includes stops in Las Vegas and Arizona.

The dad’s trip is always a special one. It gives the proud papas a chance to live like an NHL player for a few days, while providing extra incentive for their sons.

It’s a special bonding moment that’s made even more special when the team wins, or one of their sons score.

I mean, who could forget Beth Bartkowski’s interview with Dan Murphy when her son Matt scored during the mom’s trip in 2016?

The proud father can often be seen hanging around the rink, watching his son play.

Even though Bo is a multi-millionaire professional athlete, it’s quite clear that Tim is still the same hockey dad that used to watch him as a child playing on freezing cold rinks in Ontario.

Thanks to some handy camerawork on the Sportsnet broadcast, combined embedded Canucks reporter Derek Jory, fans got to live vicariously through Tim, who was loving every minute of Vancouver’s surprising 3-2 shootout win over the Vegas Golden Knights.

Horvat’s dad saw him score two goals in 21:47 of ice time, in what has to be one of the best games of his young career.

Do you think Tim saw Bo tip in the first Canucks goal to tie the game at one? You bet your ass he did:

When you know your son got the goal. pic.twitter.com/5rXmjwmqTc

Just over a minute later, Horvat scored again to give the Canucks the lead, this time with a beautiful goal off the rush:

Needless to say, he loved that goal too:

How you feelin' Tim Horvat?! 👏 pic.twitter.com/TfuemPfJHK

Sitting between the fathers of Jake Virtanen and Chris Tanev – with former NHL player and coach Brent Sutter, father of Brandon, behind him – Tim wasn’t too cool for school in the private suite.

While Bo is proving he’s the obvious choice to be the Canucks’ next captain, if we had to pick, Tim would be the dad’s captain.

Watch as he regains his composure in time for an interview with Canucks TV during the second intermission:

Tim Horvat, what did you think of the second period? pic.twitter.com/3zAtcVr35R

After breaking down both his son’s goals with incredible detail – naming the other players by name who helped set them up – Tim talked about the emotion of the dads watching the game.

“Everybody’s so into it, so excited, everybody wants to win while we’re on the trip. There’s nothing better than winning.”

A gutsy effort by an undermanned Canucks squad led the game to a shootout. After Markus Granlund scored to give Vancouver the lead, Jacob Markstrom stopped the final shot to secure the win.

Watch Tim’s reaction and you’ll know, there really isn’t anything better than winning.

“Everybody was pretty pumped after the game,” Bo told reporters after the game. “Obviously to have our dads here – and that pushed us to be that much better too – because you want to win in front of them.”

Bo laughed when told that his dad got a lot of TV time, saying his dad loves it.

“He’s a pretty passionate guy about the game, and loves watching me play hockey. For him to be here tonight and witness that, it was great to have him here.”

Here are a few more images so far from the dad’s trip, which continues Thursday in Arizona:

This made me laugh more than it should have pic.twitter.com/xLZukoQIOY

“They have so much gum here!” – every #Canucks dad pic.twitter.com/S6zarfoThJ

Put us in coach. pic.twitter.com/akljYiKW2k

Rainer Virtanen, #Canucks reporter. His first day on the job was a success.

"One more question, from Ben's mom: is Ben single?" pic.twitter.com/CIaND1RDO8

Post-game chat. What a win. pic.twitter.com/FJv2K8mIpU