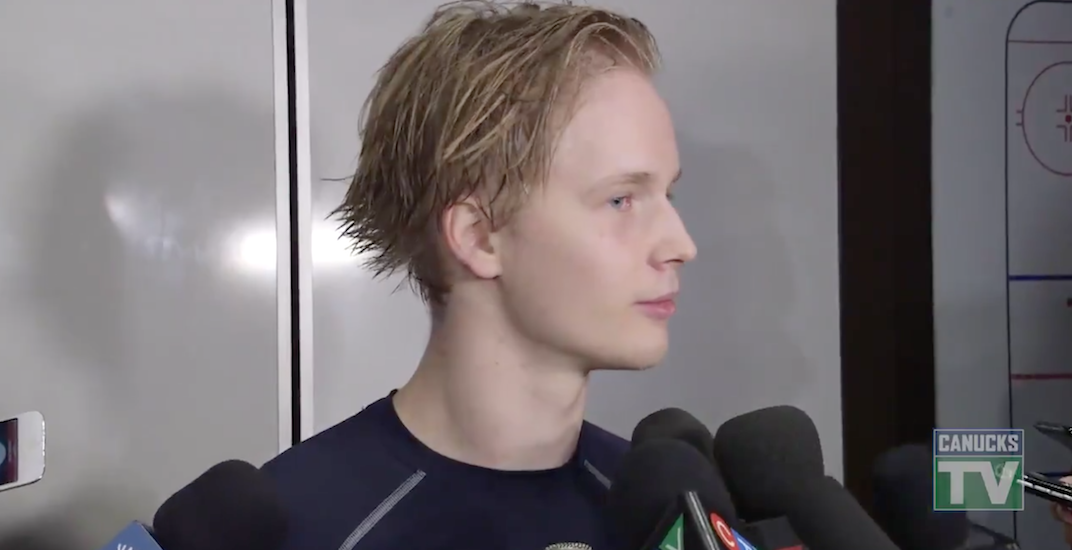 Back on the ice for his first full practice with the Canucks on Tuesday, it was the local media’s first chance to quiz Elias Pettersson since he suffered a concussion 10 days ago.

The 19-year-old rookie smartly responded with “no comment” regarding what he thought of the throw-down, but was his usual thoughtful self with most of his answers.

He’s still getting comfortable with the English language, but you can already tell that Pettersson isn’t going to be a cliché machine like many others in the hockey world.

“I knew I was going to get hit,” Pettersson said, adding that Mike Matheson contacted him later to say sorry.

“He sent me a text and apologized, so that was a very good move by him. I really respect it.”

The concussion is the first of Pettersson’s entire hockey career.

“It sucks to not play games and I want to get back as quick as possible.”

“It’s been very boring,” he said bluntly. “I’d like to not do it again in my career.”

Despite the injury, Pettersson remained with the team, travelling from Florida to Pittsburgh and Winnipeg before returning home to Vancouver. He said it helped him to be with his teammates.

“If I would be alone all the time, I would probably go crazy.”

This kid’s a beauty.

When asked who will make the decision – he or the doctors – the teenager showed the kind of moxie we used to see out of Kevin Bieksa late in his career.

“What you think?” he said with a twinkle in his eye.

But the moment from his interview that everyone is talking about was his answer to the last question.

Asked if he had any second thoughts about coming to the NHL, Pettersson seemed agitated.

“There’s hard plays in Sweden too and of course there may be bigger guys here and the ice is smaller, tougher plays.”

Then, the follow-up question: “It doesn’t make you want to go home again though, right?”

To that question, Pettersson said nothing. Just a brief death stare, and a look away.

I think that’s a no pic.twitter.com/5MXdRjvmwe

If there’s one thing we’ve learned from the youngster by now, it’s that he doesn’t like being questioned about his size, or toughness. He’s confident in his abilities.

Perhaps he may have taken the question too literally – though if he were Canadian, nobody would have asked him if he wished he didn’t come to the NHL.

Injuries happen to players of all sizes. Bo Horvat suffered a shoulder injury in a preseason game when he absorbed a hit from the Oilers’ Tyler Pitlick as a 19-year-old. Nobody wondered if he wanted to go back to the London Knights then.

"It's been very boring, but it has been nice to be with the guys." – @_EPettersson comments on concussion protocol and his first full practice with the #Canucks. pic.twitter.com/QrKgTqHv41