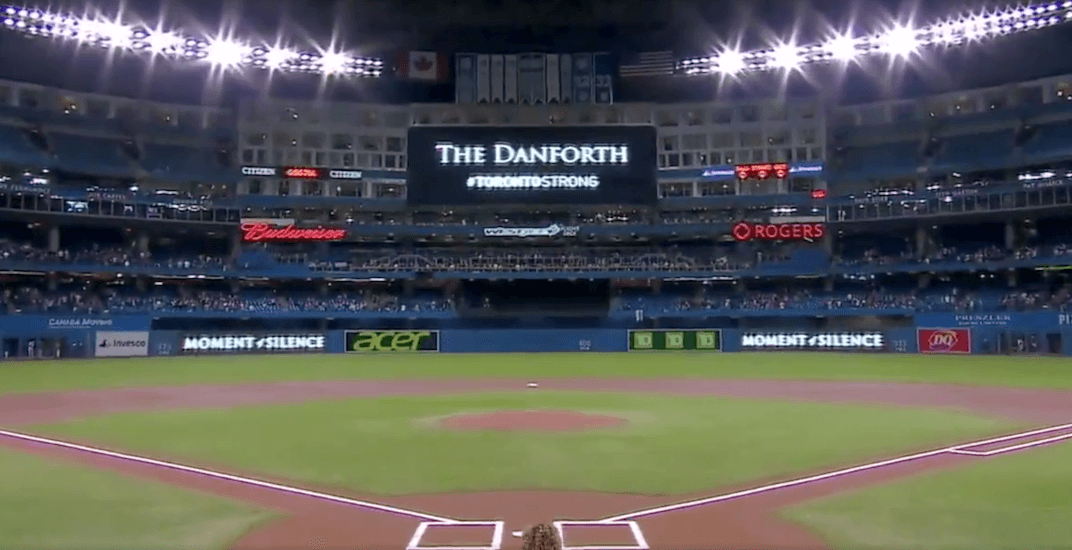 “Once again, Toronto stands strong, as another act of violence took place.”

The words “once again” said by the Toronto Blue Jays’ public address announcer, have never been more powerful, as Toronto deals with another senseless act of violence on its streets.

Two people were killed and 13 wounded along Danforth Avenue on Sunday night, just three months after a van drove into a crowd of people on Yonge Street, killing 10.

For the Toronto Blue Jays, that meant a second moment of silence and a second cry of Toronto Strong, in the same season. A moment of silence was observed before Monday’s game against the Minnesota Twins, after the Blue Jays formally thanked first responders, health care workers, and citizens that helped in the aftermath.

Our hearts are with the Danforth and the city we call home. #TorontoStrong pic.twitter.com/iIBV1Yawvg

“This senseless act took the lives of innocent bystanders and injured others,” said the PA announcer.

“Tonight, the Toronto Blue Jays organization, the Minnesota Twins, all of Major League Baseball stand Toronto Strong with our fans, our city and our community. We thank the first responders and health care workers who responded to the scene, and to citizens who tended to and stayed with injured until help arrived.

“Our thoughts are with the victims, their families, and those still fighting.”