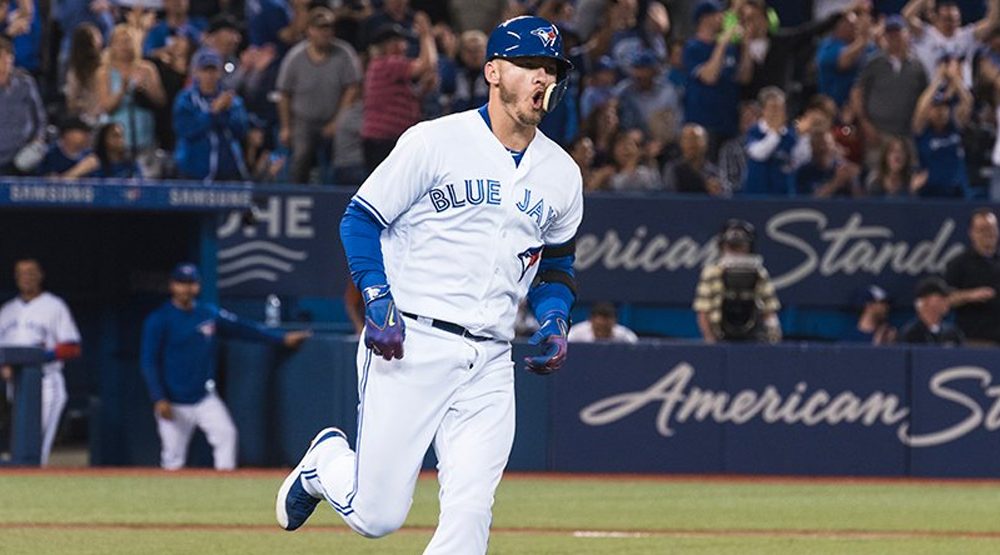 Nearly two weeks ago, Josh Donaldson posted a video of him running the bases at the Blue Jays Spring Training facility in Dunedin. He captioned the clip “Getting closer!!” – again, that was close to two weeks ago, without any word from the Blue Jays about him rejoining the club in the near future.

Over the weekend, TSN’s Scott Mitchell noticed something kind of strange: Donaldson’s locker cleaned out in the Blue Jays clubhouse. The nameplate was still there, but all his gear was gone, which is a bit odd, considering there are 31 games left in the season.

The Bringer of Rain has missed the last three months due to a nagging calf injury. The updates on his status since late May have been sporadic and a timeline for his return was never set in stone. Then, all of a sudden, his locker was bare.

It was a weird omen for what may come for the Blue Jays and Donaldson this week. His explanation for the empty locker in the clubhouse was rather bizarre:

Josh Donaldson asked #BlueJays staff to pack his locker so he has his things. "I want to play soon and wanted to make sure I have everything I need to do that," Donaldson said via team spokesman

If Donaldson’s rehabbing in the minor leagues (where the team’s uniforms are provided by players), why exactly does he need his Blue Jays game uniforms? And if he’s aiming to return to the Blue Jays on their current road swing through Baltimore and Miami, his equipment and uniforms would be shipped with the rest of the team.

At this juncture of the season, players have their lockers cleaned for one of two reasons: either they’re done for the season or they’re on the brink of being traded to another team. Or maybe it’s secret option three: to send baseball writers into a frenzy.

This is all very suspicious and an ominous sign for what’s to come. One way or another – whether he’s traded this week or his rehab stint doesn’t go as planned – Donaldson is unlikely to finish the season with the Blue Jays.

Bob Nightengale of USA Today reported Donaldson will finally get into rehab games on Tuesday for the Blue Jays. If all goes well, he’ll suit up for the Dunedin Blue Jays, take the field at his native position at the hot corner and will get a few at-bats.

Through his first two seasons as a Blue Jays, Donaldson played 313 of 324 regular season games. Since the beginning of 2017, he’s only played 149 of 293 games due to a litany of injuries.

The time is ticking for both the Blue Jays and Donaldson in this scenario. The Jays can’t trade him sight unseen; prospective trade partners need to witness that Donaldson can field, hit, and run before a deal can take place. The deadline to deal Donaldson is 11:59 PM on Friday, which is MLB’s waiver trade deadline.

It will be a very hectic 72 hours as Blue Jays do everything in their power to recoup any value from one of their most valuable players since 2015.

This isn’t a rehab assignment for Donaldson so much as it is a showcase. Surely, plenty of contending teams will be in Florida scouting him this week, evaluating whether they’re interested in acquiring the former American League MVP.

Not only is this a showcase for the Blue Jays, Donaldson is also trying to build some semblance of value as he enters free agency for the first time in his career. The 32-year-old’s trade value has plummeted, along with it, his free agent stock. One year ago, he was primed to hit the market and land a multi-year deal in the neighbourhood of $100 million. This offseason, he’ll be lucky to get one-tenth of that amount.

It’s no coincidence this is all coming to a head extremely quickly. It’s carefully orchestrated by the Blue Jays as they’re desperately trying to get Donaldson trade-ready before Friday’s deadline. If it wasn’t feasible to bring him back so soon, none of this would be happening. Donaldson must exhibit at least some signs of a return to baseball activity, otherwise, the Jays wouldn’t rush to get him back onto the field.

In retrospect, last winter would’ve been the time for the Blue Jays to maximize their return on their All-Star third baseman. As of now, the best the Jays could do is a low-level prospect in exchange for him. The club didn’t anticipate Donaldson missing 94 games and counting, which is why his trade value hit rock bottom this year.

It’s weird to think that Donaldson last played for the Blue Jays back on May 28th, exactly three months ago. It feels like a lifetime since then. The team as it’s currently constructed is a far cry from what it was at the end of May.

In many ways, it seems the Blue Jays moved on from Donaldson weeks ago. It finally has the potential to become a formality later this week.