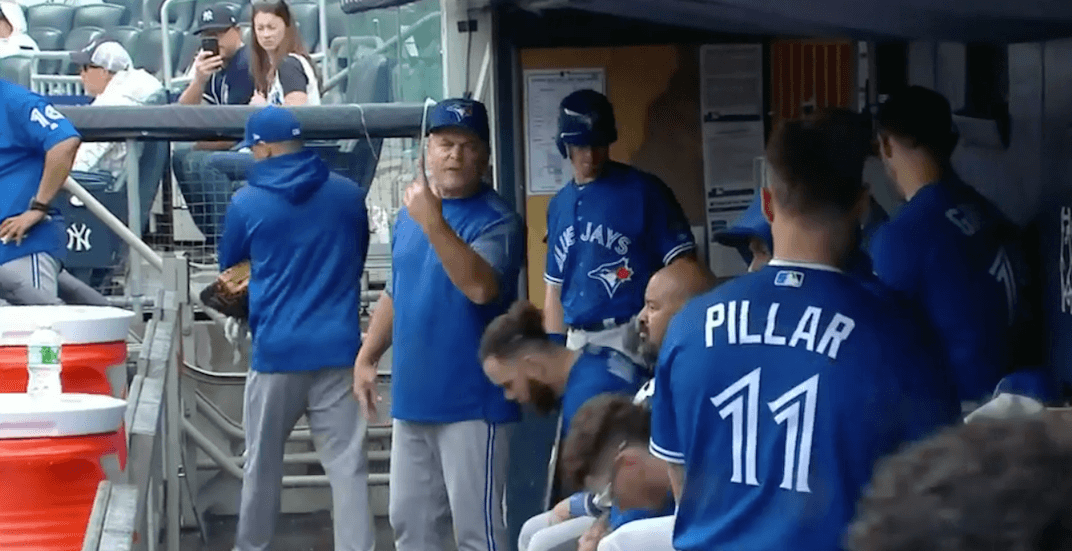 The Toronto Blue Jays’ 2018 season has been nothing short of a gong show and on Sunday, the man with a front row seat to the team’s shenanigans finally snapped.

It’s been a rough season for the Blue Jays, but the last calendar month has been especially brutal to watch. To drill down even further, this past weekend in the Bronx was especially taxing on manager John Gibbons.

During the last two weeks, he’s dealt with whispers about his future with the club. As injuries pile up, it forces the team to call up young, inexperienced players to fill the void. And it hasn’t gone as smoothly as the Jays would’ve hoped for.

For Gibbons, it all reached a boiling point during Toronto’s lopsided 10-2 loss to the New York Yankees.

In the top of the sixth inning, with two outs, Kevin Pillar made the cardinal sin of being thrown out at trying to steal third base. It’s extremely rare to see a manager chew out one of his players for making a boneheaded play on the base paths, but that’s exactly what Gibbons did.

Pillar gets the third degree from Gibby. pic.twitter.com/x6NdA7wQRp

These are conversations which typically happen in the clubhouse or the manager’s office, but Gibbons ripped Pillar right there in the dugout immediately after the play. It looks like a few choice words were used in the tirade, as well.

Pillar’s overaggressiveness is especially unforgivable because he should know better. He’s been an everyday player for the past four years.

“That play is unacceptable in rookie ball. That play is unacceptable in high-school ball. That shouldn’t happen. It can’t happen. You’re down. He knows it,” Gibbons said after the game. “It’s tough to criticize Kevin because of the way he plays the game. He does everything right. He sacrifices his body and all of that. But every now and then we lock up mentally, I guess.”

Gibbons and Pillar have had words about things like this in the past. Back in 2014, the two came to blows after Pillar was taken out of a game for a pinch hitter. He threw down his batting gloves in disgust and tossed his bat down the stairs. Gibbons fired back at the Blue Jays’ young outfielder and the following day, Pillar was demoted to Triple-A.

This wasn’t the first time the Jays made the third out at third base in this series, either. On Saturday, Billy McKinney was gunned down at third trying to stretch a double into a triple. To see that mistake made twice in the same series must’ve driven Gibbons mad. It may not have been the most tactful way to deal with Pillar’s poor decision, but Gibby was absolutely warranted to blow up like that.

To add to the frustration, Ryan Borucki – one of the Blue Jays’ best young starters – didn’t even escape the first inning after throwing 44 pitches and giving up six runs to the Yankees.

Then, to pile on even further, the Blue Jays lost their challenge on the field after a close bang-bang play at first base between Miguel Andujar and Kendrys Morales. In the seventh inning, another close play at first cost the Blue Jays an out. Even though Devon Travis appeared to hit the bag before the runner, they were deemed safe.

With no challenges remaining and the game well out of hand, Gibbons’ only recourse was to vent his frustrations to the umpire. That he did, getting his money’s worth after being served his 50th career ejection. Hopefully, a congratulatory cake was waiting for him in the visitor’s clubhouse.

Getting tossed from the game was merely the icing on the cake for Gibbons’ terrible, horrible, no good, very bad day at Yankee Stadium.

For now, it sounds like Gibbons will stick around to finish the season as Blue Jays manager. Beyond that is very much in question, but at least the front office put the rumours of their manager’s imminent firing to rest.

If Gibbons keeps having horrible days like the one he witnessed on Sunday, maybe getting a pink slip wouldn’t be the worst thing in the world.