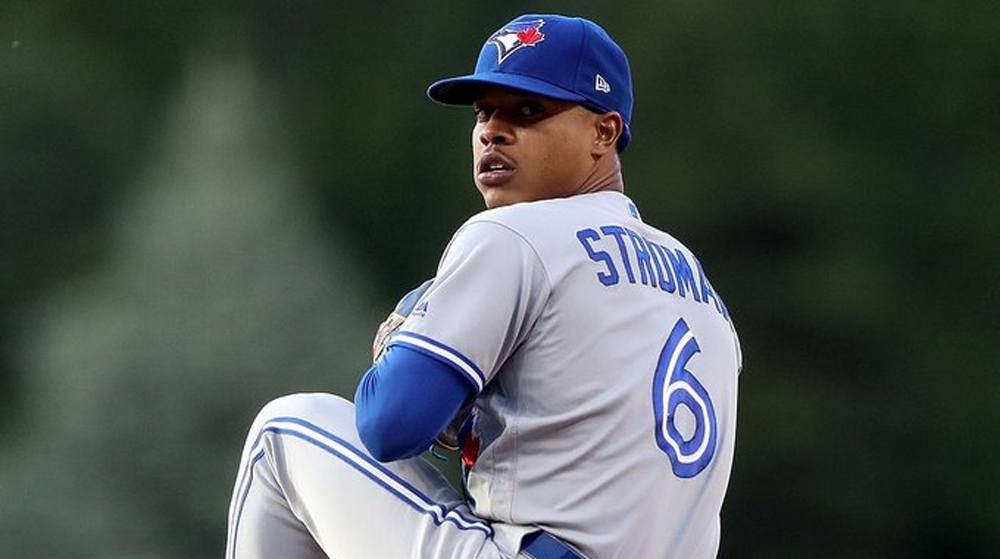 Nearly one year ago, the Toronto Blue Jays shocked absolutely no one in baseball by dealing away one of their most obvious trade chips: J.A. Happ. The deal netted the Blue Jays a pair of Major League players in return, in Brandon Drury and Billy McKinney.

At the time, suggesting the Blue Jays would receive two big league calibre players in exchange for a rental pitcher of Happ’s calibre would’ve been viewed as a win. One year later, that particular trade hasn’t brought the team much value.

It would be premature to say the Happ trade was a bust, but 12 months after the fact, in retrospect, they could’ve done much better.

With the Blue Jays holding an extremely valuable trade chip in the form of Marcus Stroman, the team can’t afford to botch another deal involving one of their veteran starting pitchers.

Much like with Happ last season, a trade involving Stroman feels inevitable. Trade rumours have circled the 28-year-old for months now and with the July 31 trade deadline quickly approaching, those reports will continue to ramp up.

With the status of Ken Giles up in the air, Stroman is unquestionably the most valuable commodity the Blue Jays have and he’s the most attractive readily available player on their roster.

In years prior, the Blue Jays wavered on whether they’d be buyers or sellers at the trade deadline, but for the second consecutive season, Toronto will unquestionably be one of the biggest sellers. Where they were dipping their toes in the rebuilding pool last year, they’ve now plunged in all the way up to their necks.

What Atkins ultimately does with Stroman could be pivotal for this team moving forward. With a position player core firmly in place and the makings of a promising long-term starting lineup, the Blue Jays can see the future falling into place. Hitting big on a potential Stroman trade may push this club that much further towards contention.

The Happ trade with the Yankees is the most recent comparable and it might be unfair to say it looks like a loss for the Blue Jays. Whether that was the best deal at the time — whether the club valued Major League-ready players over prospects — those factors may have been in play.

But when a team like the Blue Jays is poised to trade a star pitcher with Stroman’s pedigree, they better emerge from that deal with a solid return. One-plus seasons of team control for a top-10 Cy Young pitcher can be worth its weight in gold for a contender looking to push themselves over the top.

The Blue Jays are expecting a “big haul” for Stroman, according to a report from Sportnet’s Shi Davidi.

Teams like the Houston Astros, New York Yankees, Atlanta Braves —and to a lesser degree, the Philadelphia Phillies and San Diego Padres — make all the sense in the world for a Stroman trade.

A pitcher with a career 3.82 ERA and 133 starts over the last six seasons should net a big haul for any prospective team.

If for some reason, a fair deal doesn’t materialize for Stroman, the Blue Jays aren’t absolutely obligated to trade him. Similar to last year, Toronto could play it safe with Happ and take the best deal on the table. That move got the organization no further to their goal. In one year, neither McKinney nor Drury has moved the needle towards contention.

For an organization that’s incredibly risk-averse, Atkins has played his trades by the book. There have been a few incremental wins, some negligible losses in trades, but this Stroman trade is one deal the Blue Jays can’t risk screwing up.

And if the right offer for Stroman doesn’t materialize, then perhaps the organization approaches him with a contract extension this offseason to bridge the gap for the next three-to-four years. Or, the Blue Jays shop Stroman during the offseason, when in theory, there will be more buyers for his services.

For better or worse, what happens with a franchise figurehead like Stroman could define how this front office forges ahead over the next few years. Hit on a Stroman trade, and the Blue Jays might find their next frontline starter. Miss, and it could set back the organization even further towards rekindling that magic from those 2015 and 2016 seasons.