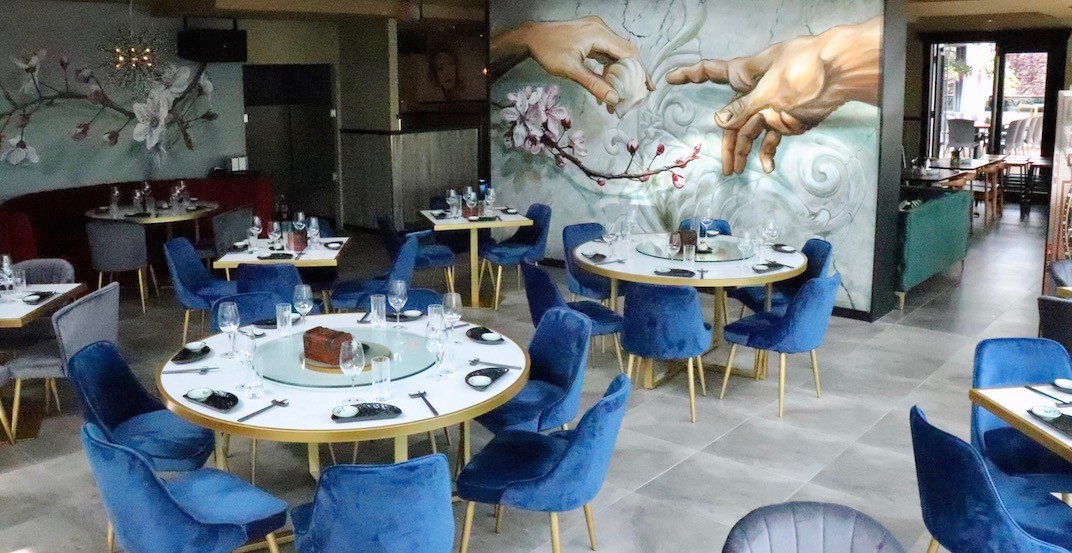 Okay, is it just us? Or has Vancouver’s new restaurant scene completely exploded lately?

There have been a few notable openings over the past few weeks we’ve been excited about, and a new concept is about to officially open in the heart of downtown Vancouver.

Blossom Dim Sum & Grill will officially open at 808 Bute Street later this month, on June 28, to be exact. 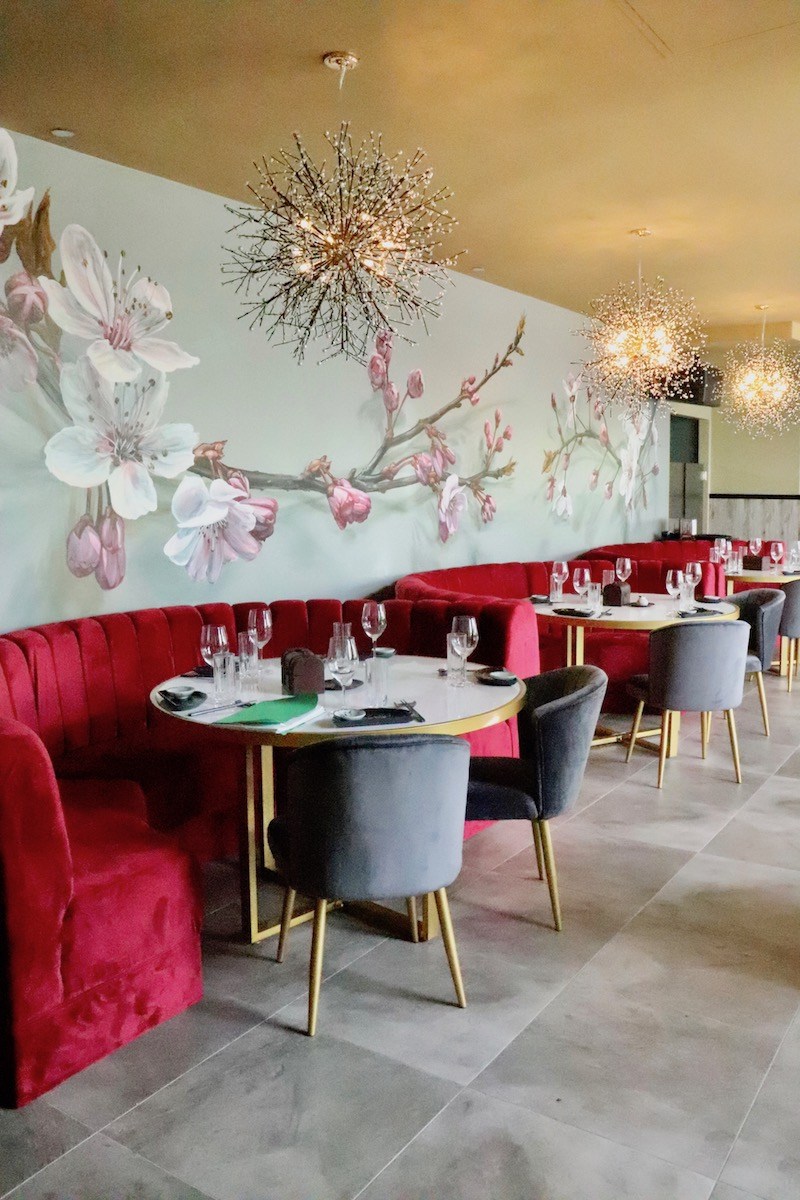 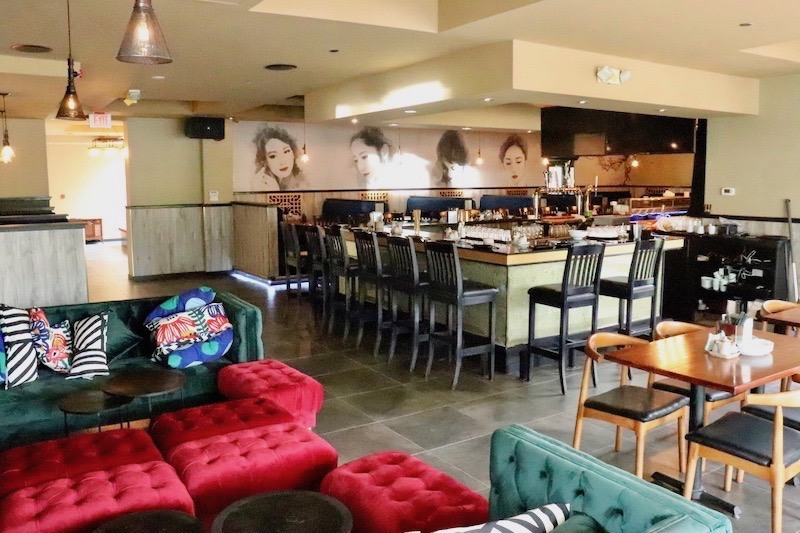 Once you get up the steps to Blossom – or step outside of the shiny branded elevator – it’s clear to see there have been some major changes implemented when it comes to decor in the breezy 180-seat East-meets-West restaurant. 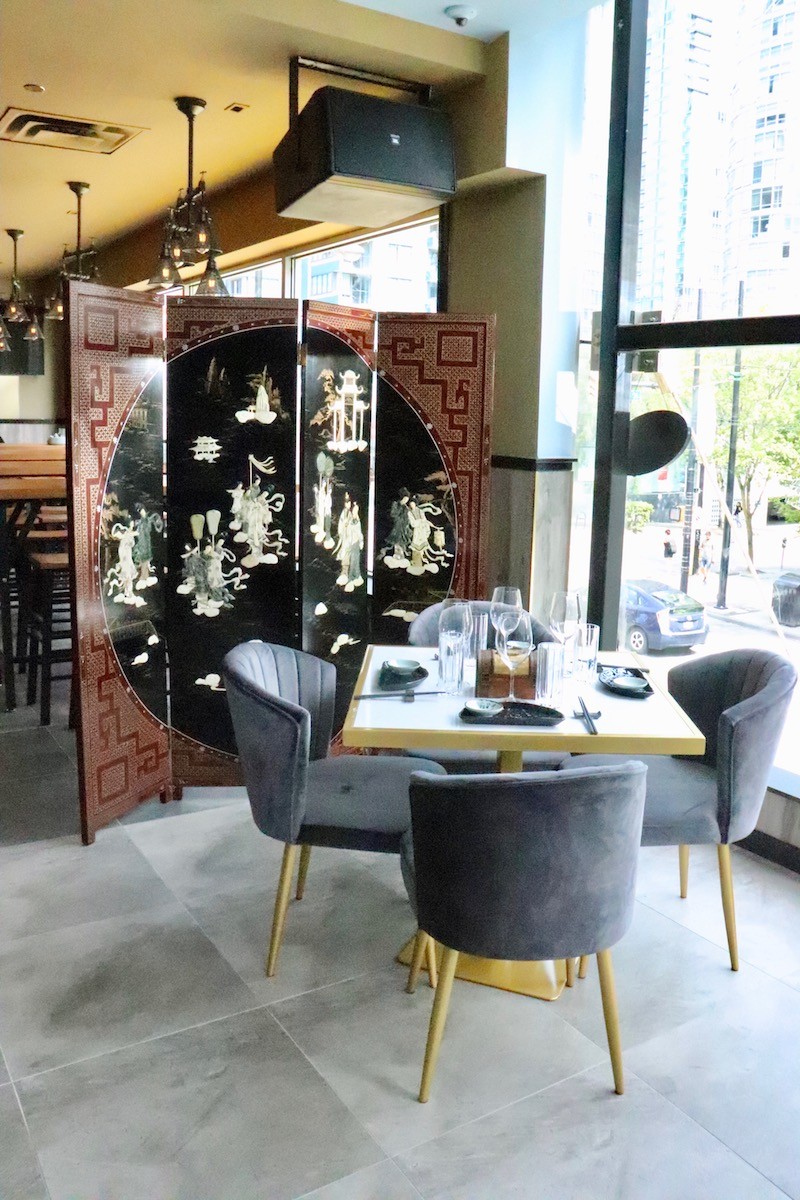 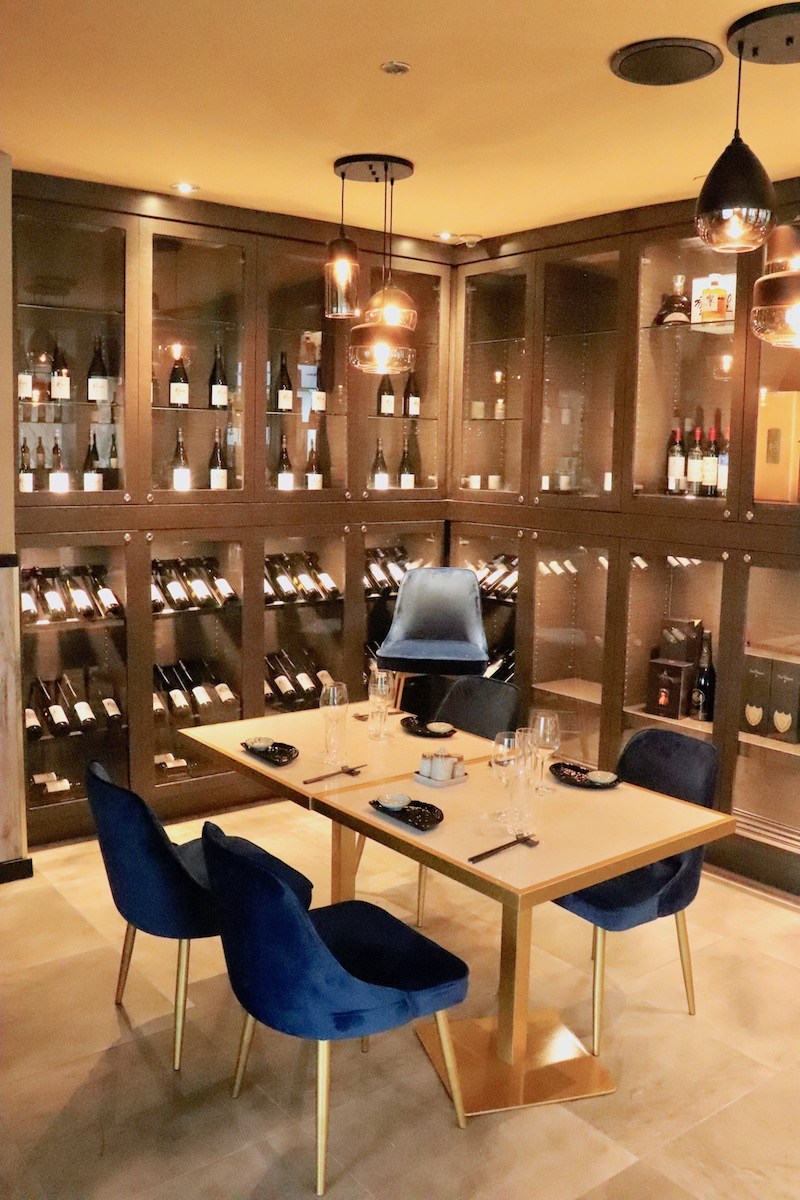 There are several vibes in the space: think cozy raw bar/sushi bar, lounge space complete with plush velour booths, and then a chic formal dining room just past the partial dividing wall.

If you keep travelling toward the back of the eatery you’ll spot the semi-private “wine room” located directly across from the private meeting/dining area complete with door, curtains, and four TVs for all your multimedia purposes. 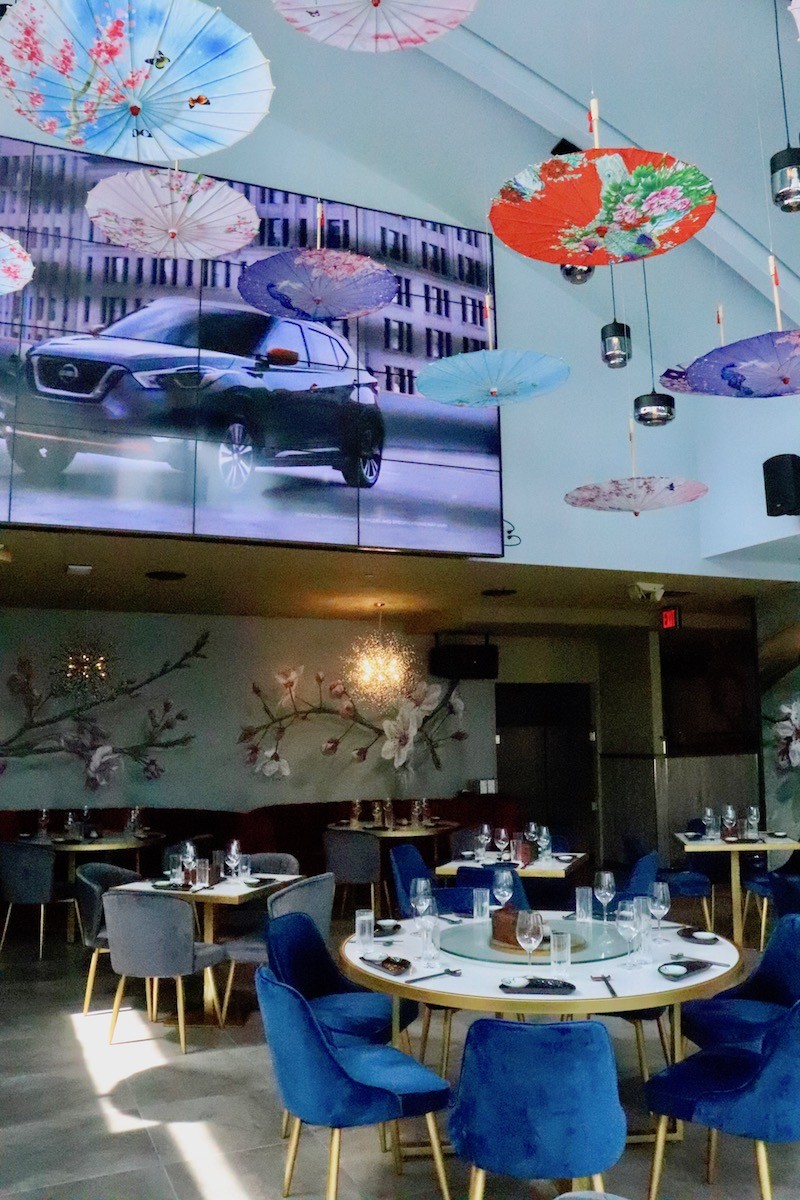 Murals and paintings by local BC artist Tyler Toews adorn many of the walls of Blossom, and that includes a striking exterior painting of “blossom wings” that you can’t miss while walking into the venue.

The restaurant also features 13 widescreen TVs which will play some televised sporting events, as well as black and white movies and photos too. 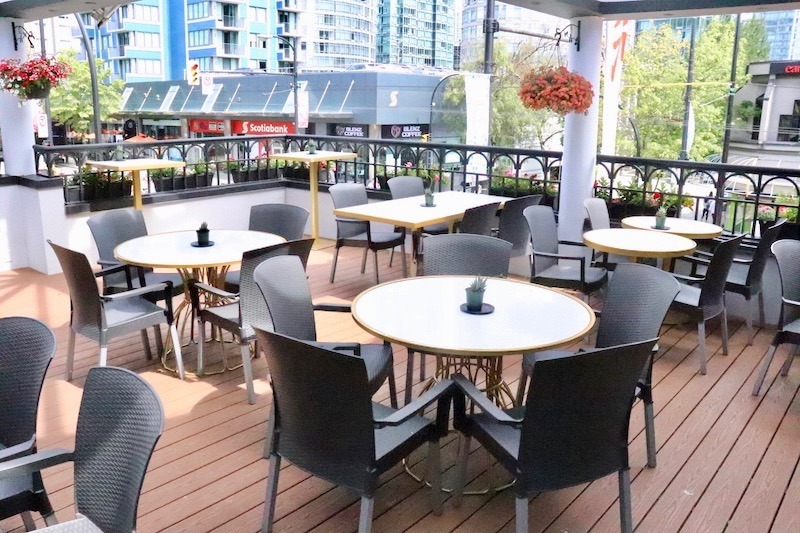 Blossom boasts a 40-seat outdoor patio with plenty of room for larger parties looking to sit and enjoy the sun and some people watching on Robson Street. 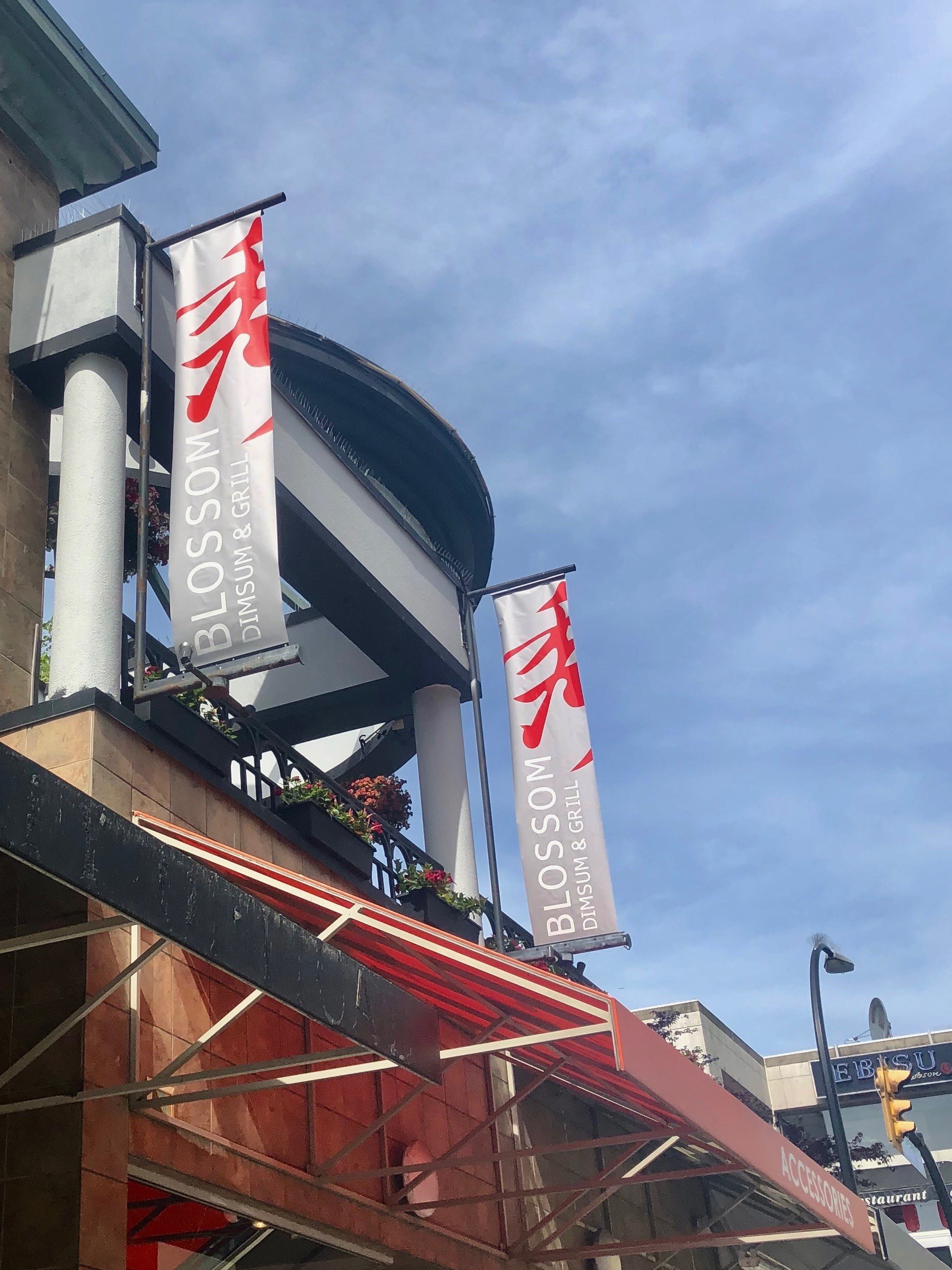 The kitchen has separate stations for the fresh daily dim sum, sushi, and the grill portions of the menu, which makes the large variety of up-for-order items possible.

Accessibility was a priority when making the menu here, meaning prices aim to keep diners from labelling Blossom as just a special occasion spot. 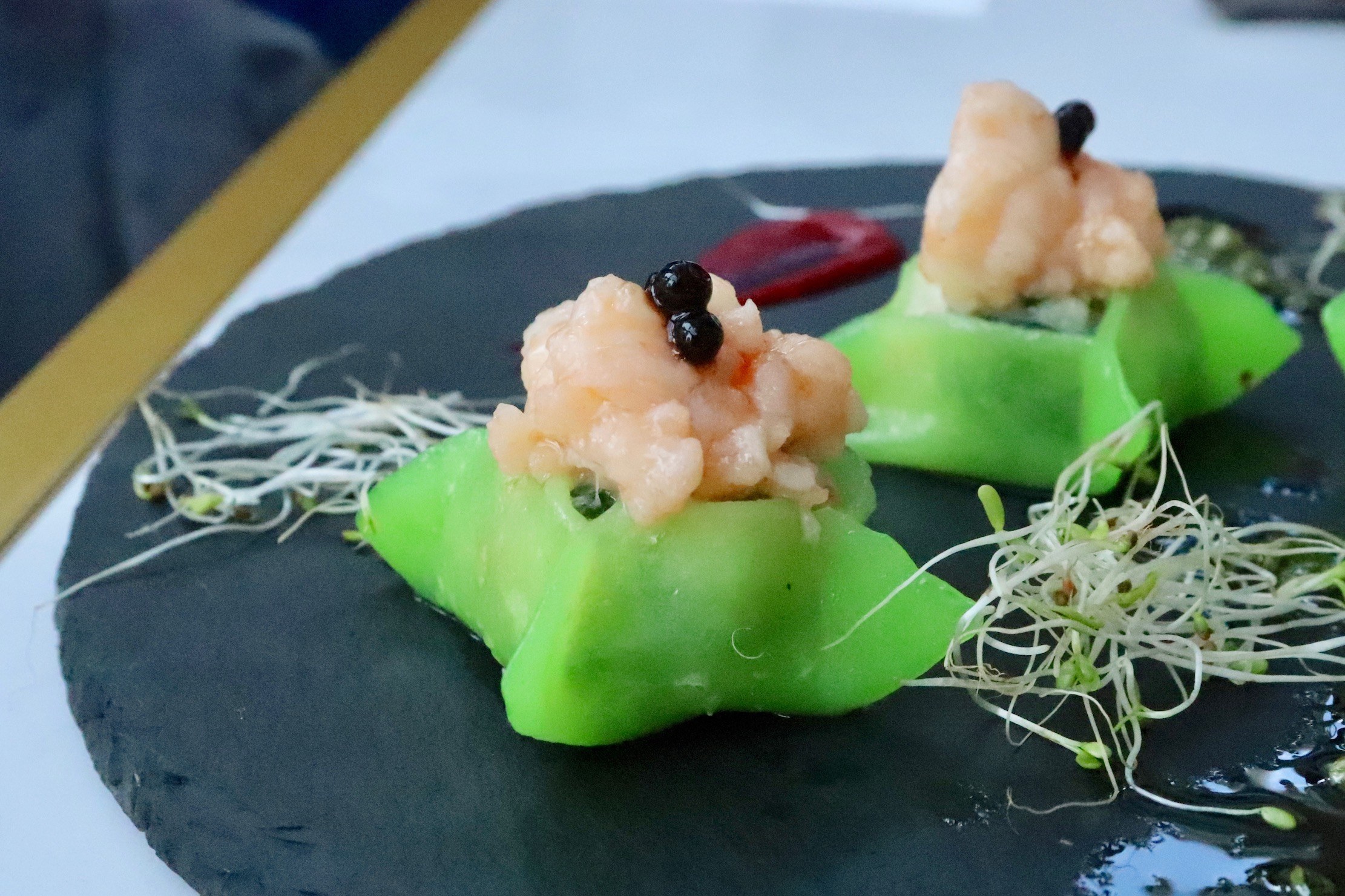 Patrons can expect a full dim sum section with handmade, fresh protein and plant-based dumplings like the vibrant Lobster Dumpling with pea tips and the Wild Mushroom Dumpling served with black truffle aioli (the latter was a highlight for us). 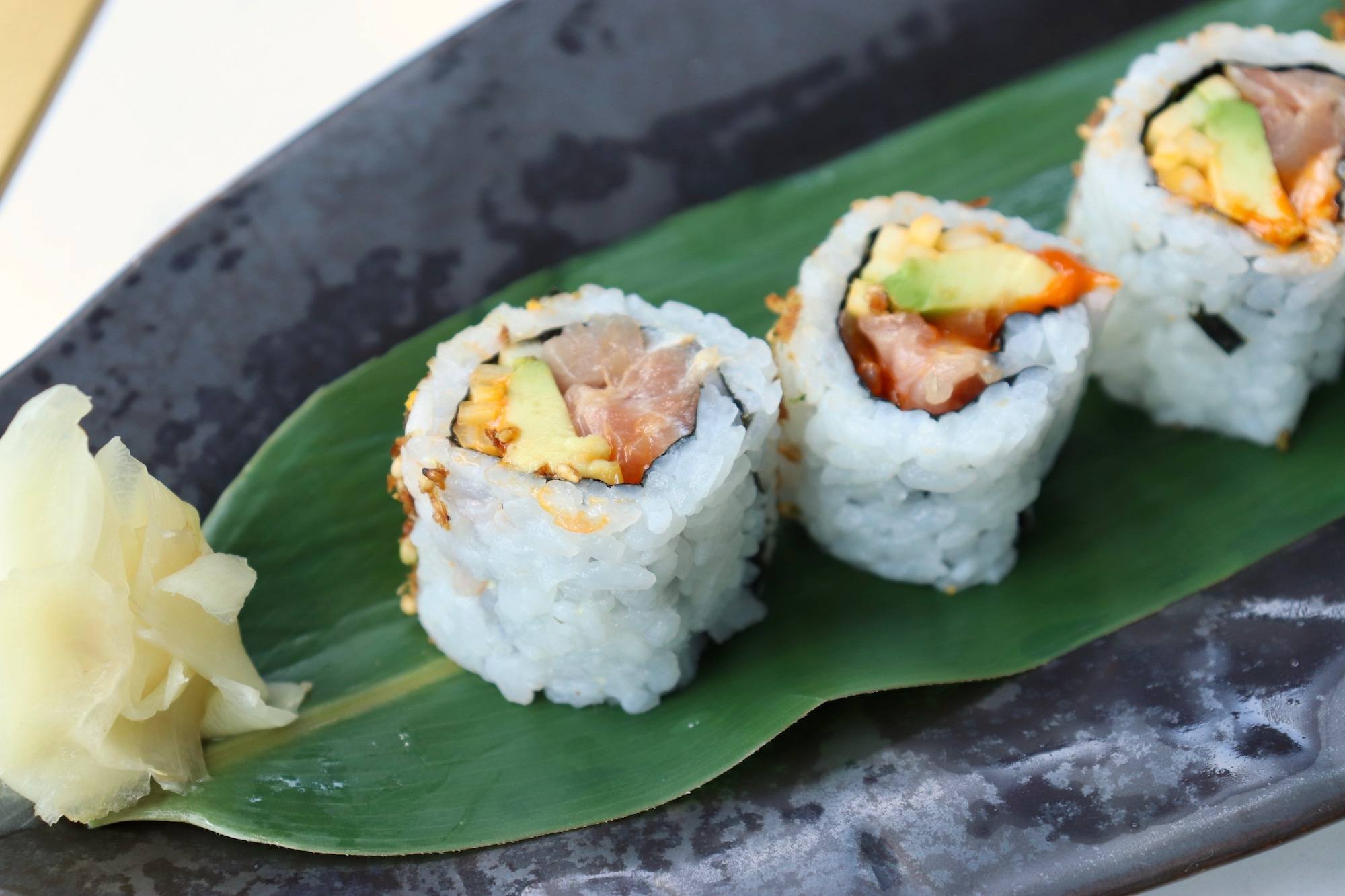 Sushi and sashimi are served with carefully-sourced seafood and often housemade sauces. We’re partial to the Spicy Blue Fin Tuna Roll as the housemade chili mayo was just the right amount of spice.

There are over a dozen selections under the sushi and sashimi category, so you could definitely come and have a sushi feast if that’s what you’re up for.

That being said, there is so much more to bite into here aside from the dim sum and sushi. 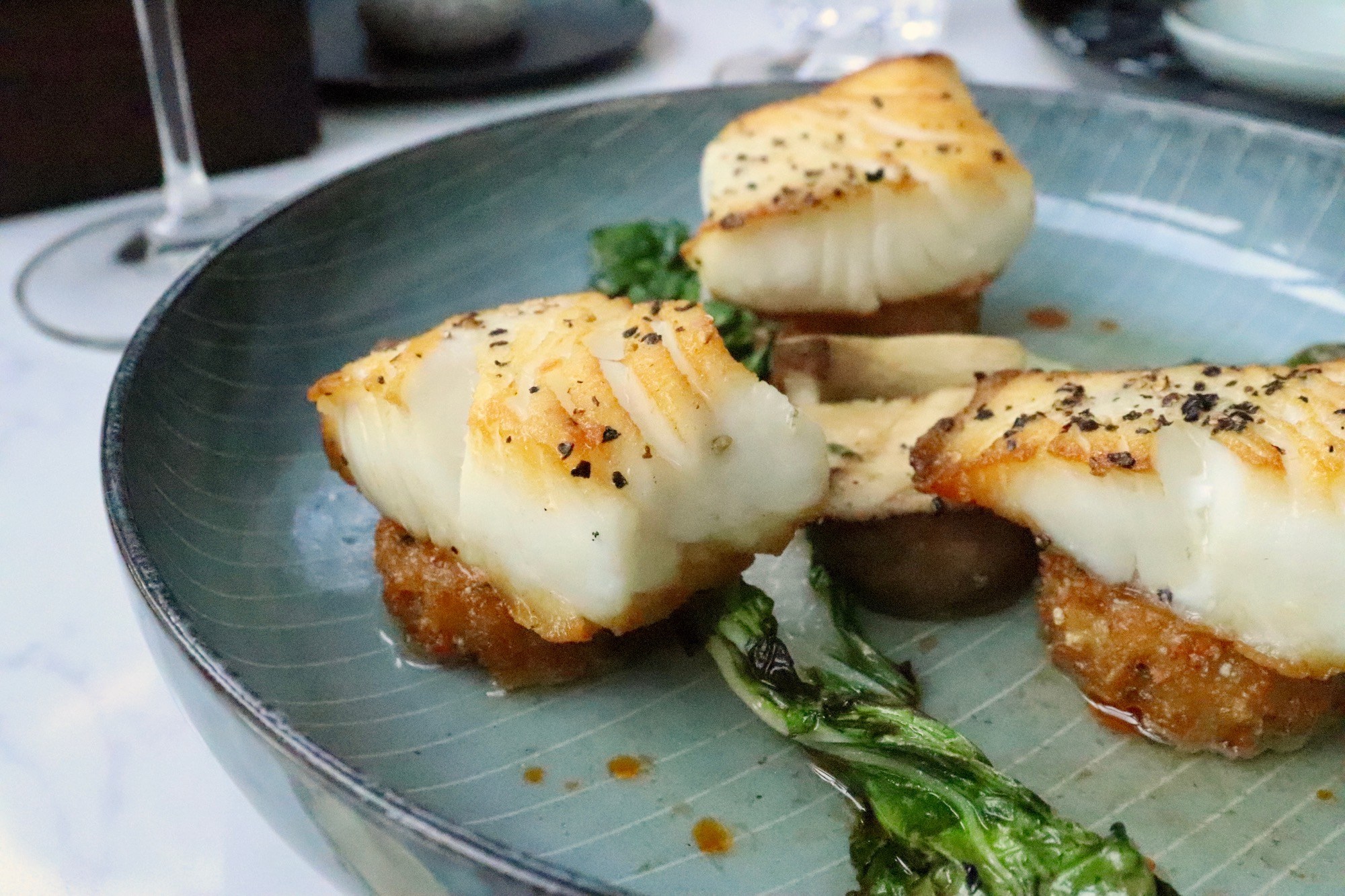 Rice bowls topped with sea urchin, BBQ eel, teriyaki chicken, and seared foie gras are all up for order, along with hearty dishes like the Seared Sablefish on crispy rice cakes and even a Whole Branzino, Bison Rib-Eye Steak, and Lamb Chop dish. 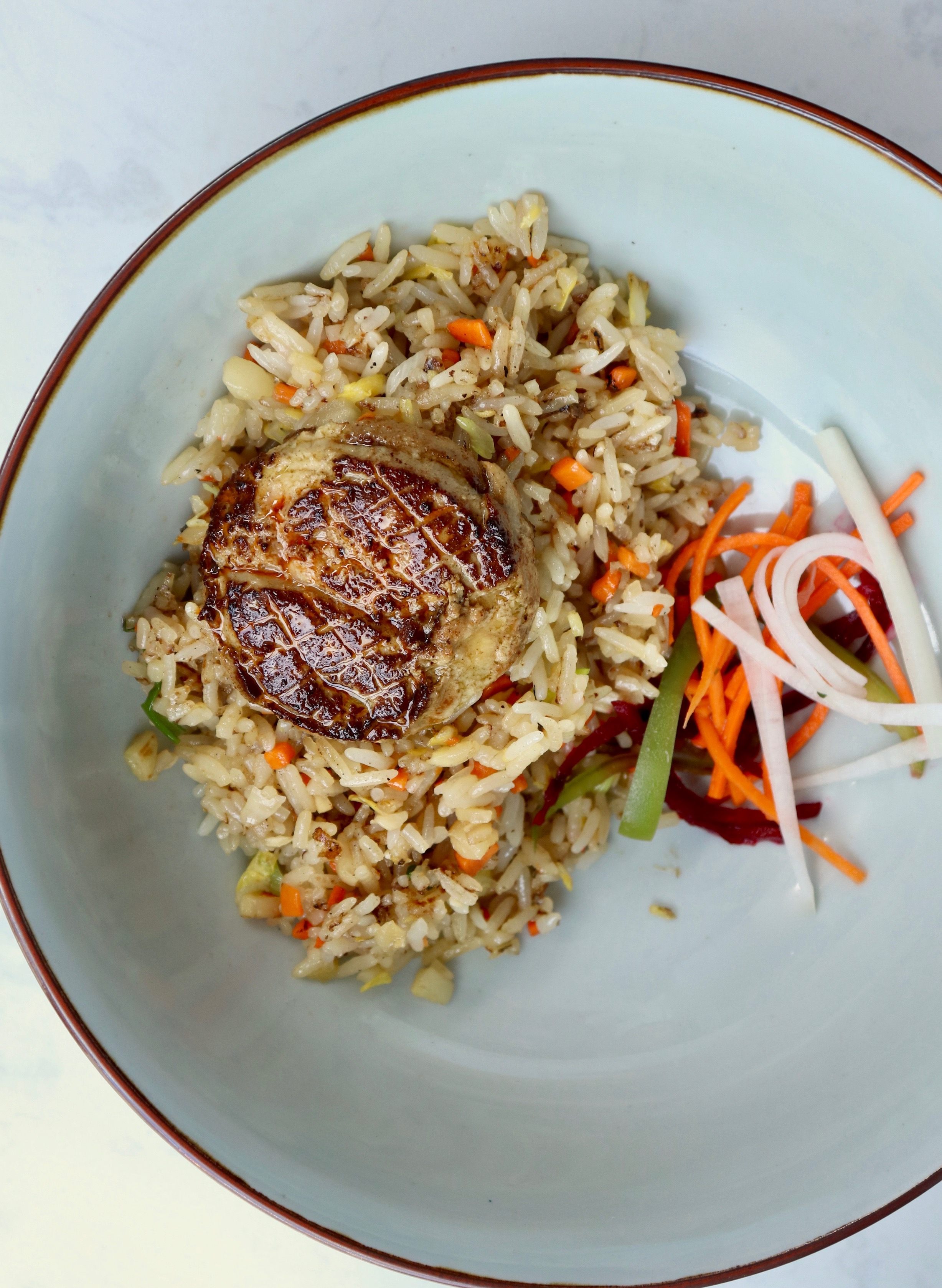 Naturally, when you have a menu this diverse, you’ve got to plan your cocktail, wine, and beer program to match.

Think local craft beer, wines and champagnes that range in price, and special cocktails like the 6oz Hong Kong Bowl made from baijiu, soho, peach, black lychee tea, meant to be shared among six people. 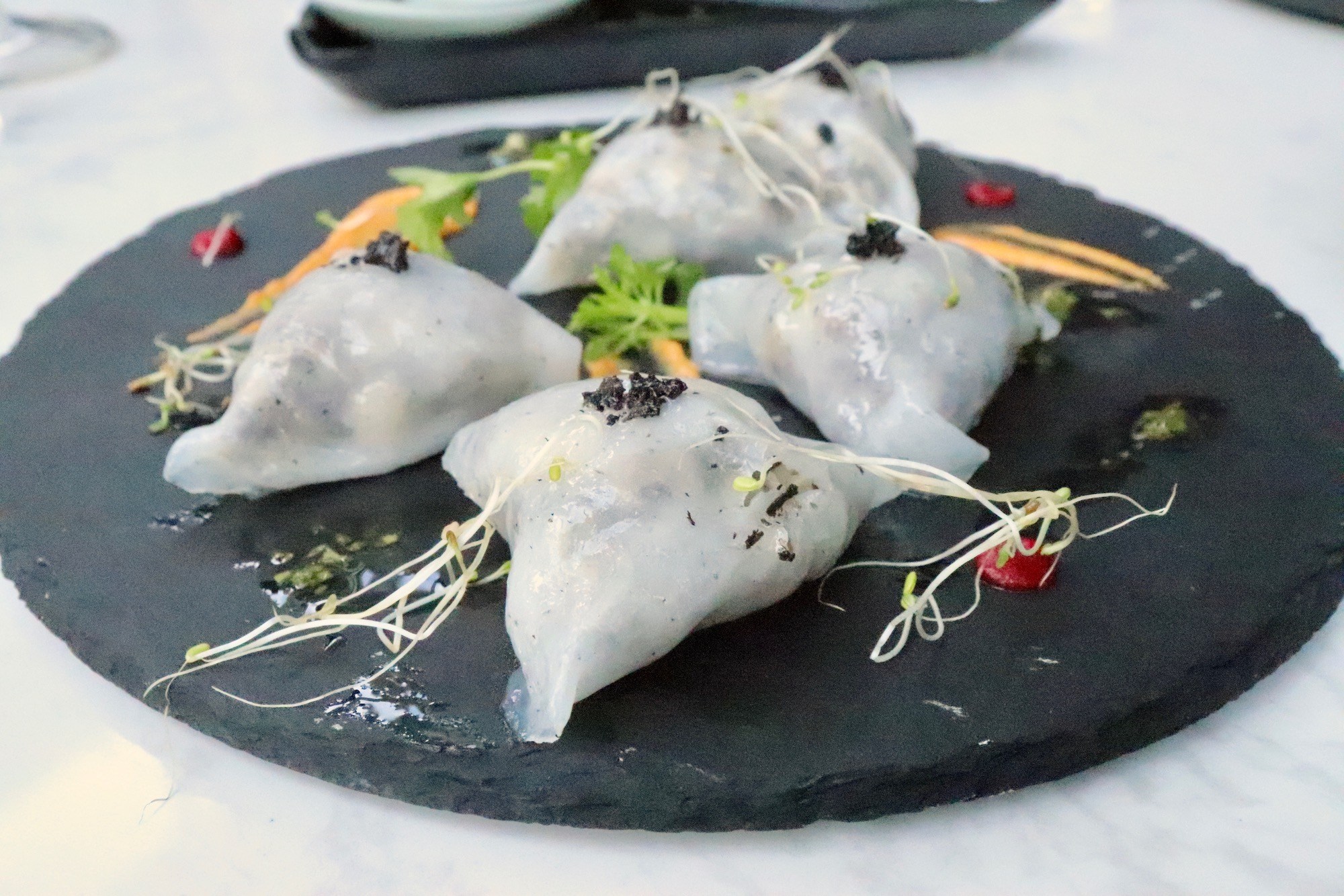 While this new Bute Street spot hasn’t officially opened yet, you will likely find it open between now and June 28 if you stop by.