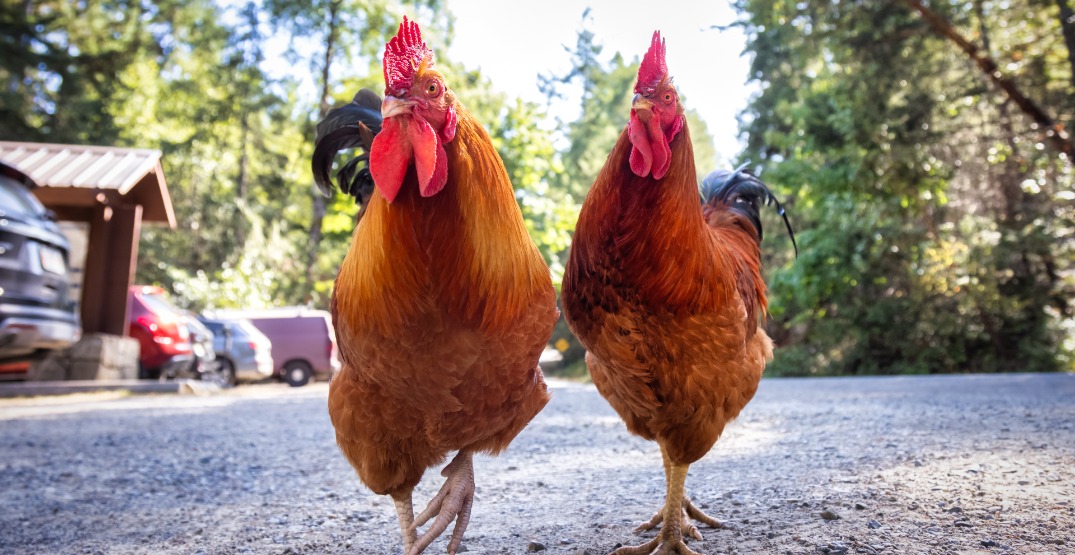 Small flocks of birds in Richmond and Kelowna have tested positive for bird flu, and people with backyard coops are being urged to stay vigilant while caring for their chickens.

The infected area has been placed under quarantine by the CFIA, and BC’s Ministry of Agriculture and Food told producers within a 12-kilometre radius about the flocks with positive test results.

What is a Primary Control Zone (PCZ) for highly pathogenic #AvianInfluenza (#HPAI)?

A PCZ is the boundary around a place where HPAI has been confirmed. Once declared, certain movements of birds and bird products require CFIA-issued permits. 1/3 pic.twitter.com/FqblbVRvAW

Infected birds may have come into contact with infected, migrating wild birds, according to the CFIA.

Wild birds in Vanderhoof, Lac la Hache, Bowen Island, Delta, and Vancouver already tested positive for the H5 strains of avian influenza. While they’re not likely to interact with humans, they might try to interact with birds in backyards.

Have birds of your own to worry about? Keep your coop safe by eliminating or reducing opportunities for your flock to encounter wild birds and other humans. Cleaning and sanitizing the area where you house them will also help.

PCZs have been declared in #NewBrunswick, #Quebec, #Ontario, #Manitoba, #Saskatchewan, #Alberta and #BritishColumbia. These zones help prevent the spread of HPAI from areas where it has been detected. Check our website for the latest updates. 2/3

The first confirmation of H5N1 in BC poultry was at a commercial producer in the Regional District of North Okanagan in mid-April, the CFIA said.

“Avian influenza is a federally regulated disease, and the CFIA leads the investigation and response with provincial support for testing, mapping, surveillance, and disposal,” it said in its statement.

“Owners of small or backyard flocks are urged to continue to be vigilant and have appropriate preventative measures in place.”