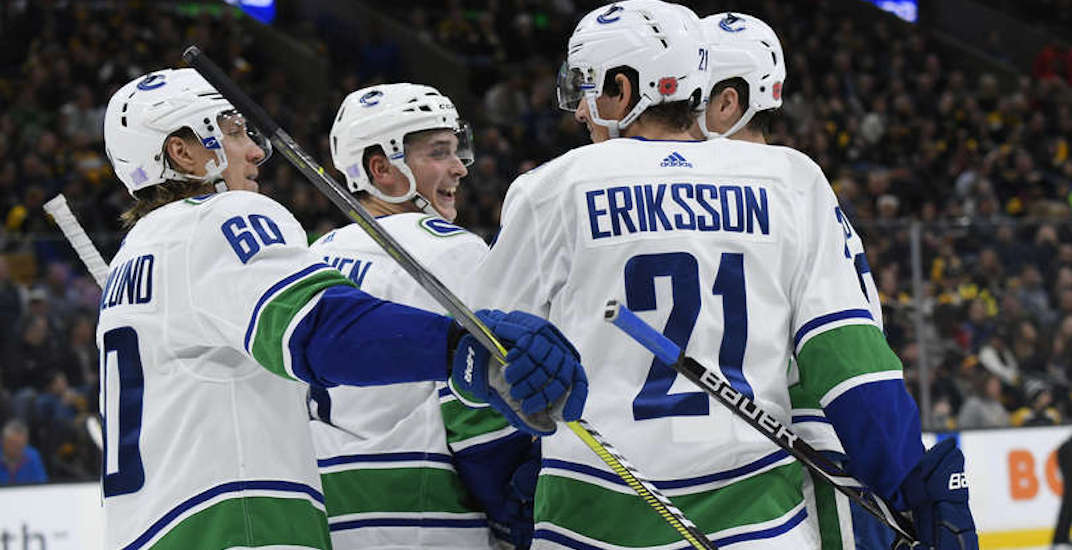 What world is this?

The Vancouver Canucks didn’t just win in Boston on Thursday, they blew the doors off the Bruins 8-5.

It was a game where nothing made sense.

Canucks with as many goals tonight as the entire 2011 Final.

Eleven of the Canucks’ 18 skaters registered a point. Six players had multi-point games, and that doesn’t include Elias Pettersson who didn’t get on the score sheet until the eighth goal, when he assisted on Jake Virtanen’s goal.

So yes, that meant another #ShotgunJake:

Ben Hutton and Erik Gudbranson each had a goal and an assist. Gudbranson is now on a four-game point streak.

Loui Eriksson had three points, including two goals against his former team.

Bo Horvat had two goals and two assists, including a shorthanded marker, to go with three minor penalties.

Markus Granlund and Nikolay Goldobin had two assists each.

They chased Bruins goalie Jaroslav Halak from the game, who entered the night with a .952 save percentage and a 1.45 goals against average.

This, against a powerhouse Bruins team who were 5-1 on home ice, that should have been ready to play given they had two days off before Thursday. This, with all the injuries the Canucks have suffered, including Brock Boeser who flew home to Vancouver to see a specialist earlier in the day.

Nobody saw this coming.

The Canucks are 4-0-1 in their last five games and are in third place in the overall standings. They were supposed to struggle to score this season, but somehow they’re leading the league in goals.

Is this real life? #Canucks pic.twitter.com/ai6vcVj4Ge

This was the first time since 2009 that the Canucks scored eight goals or more in a game. They’ve only scored more than eight goals 15 times in the 48-year history of the club.

But it wasn’t all good news. Vancouver is giving up a ton of goals and…

Today was a good day.

No Boeser, No Sven B, No Sutter, No Beagle, No Edler, No Sedin's and the #Canucks are scoring more goals then I've seen in years!

#Canucks have picked up 9 of 10 available points in the last 5 games, and are at the top of the Pacific division. Im enjoying watching my team shock the world. Its not luck, its skill. Theres a new team in town, and theyre badass 😏😂

I think it is now legitimately allowed to discuss the possibility of #canucks making the playoffs.

I thought we weren't supposed to score goals? #Canucks

Guys. The team just scored 8 goals and EP40 only had a point. #wtf #Canucks

This team is so fun to watch

Next game is Saturday against the Sabres. You’ve been warned, Buffalo.