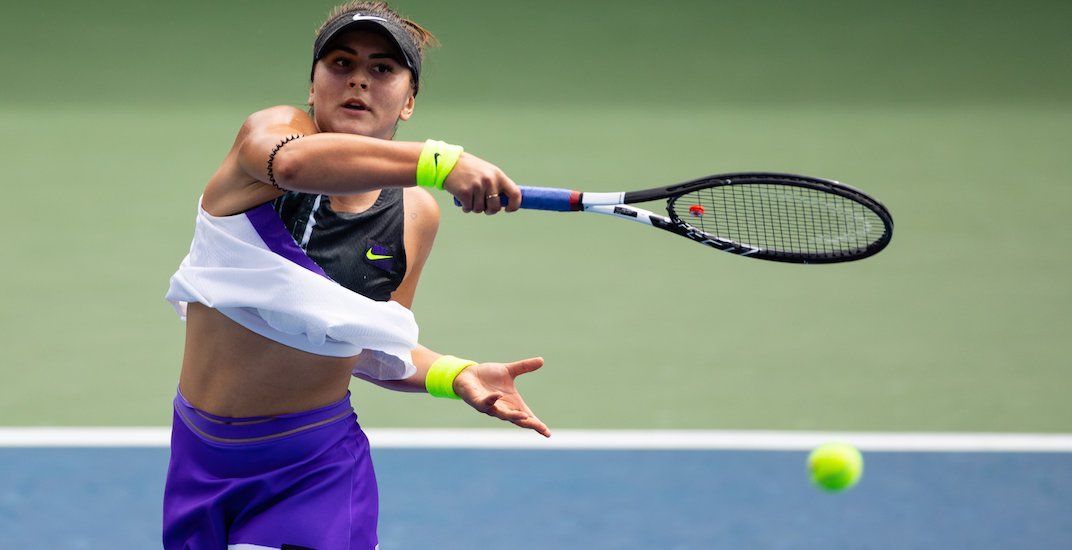 It hasn’t taken long for Bianca Andreescu to become a household name in Canada.

The 19-year-old tennis star has skyrocketed up the world rankings this year. Ranked as low as 243rd in the world last season, Andreescu began making noise at the start of the 2019 season.

She beat the likes of Caroline Wozniacki and Venus Williams en route to a finals appearance in Auckland, before winning one of the most prestigious tournaments on tour at Indian Wells in March.

If the Thornhill, Ontario native didn’t have your attention at that point, she surely did when she became the first Canadian in 50 years to win the Rogers Cup. That set her up well for the US Open, where she’s the 15th seed.

Even more impressive? She’s done it all while dealing with some nagging injuries.

Now, for the first time in her career, Andreescu is making a run at a Grand Slam. Here are six things to know about Canada’s rising tennis star.

Andreescu hasn’t just won over fans this year due to her on-court success.

Off the court, the teenager is wise beyond her years, as we saw when she consoled living legend Serena Williams in Toronto.

She’s also got one heck of a sense of humour, not being afraid to point out when the US Open crowd was actively trying to throw her off her game during the Round of 16.

American tennis fans at the #usopen tried to throw @biancaandreescu_ off her game by cheering during her serve and saying “double fault.” She won anyway 👊🎾🇨🇦 . 🎥: @tsn_official

Bianca Andreescu’s reaction to finding out she’s going to crack the top 10 in the world rankings was priceless 🤗 . 🎥: Andreescu_Fans/Twitter

The mix of shock, humility, and honest emotion makes Bianca an easy player to cheer for.

On the court, Andreescu is as entertaining as you could ask for.

A fiery competitor, the youngster isn’t afraid to show her emotions – even drawing a code violation for throwing a racket on Monday.

After showing frustration, Andreescu always seems to find a way to regain her composure, refusing to let it derail her matches.

Andreescu plays a power game, but is also able to mix it up with a slice or a cheeky drop shot, making her unpredictable.

Andreescu uses a maple leaf racquet dampener for good luck, and always makes sure she washes her hands before she goes onto the court.

But those aren’t the superstitions getting attention at the US Open.

No, it’s all about her hair tie that she has turned into an arm accessory.

What a week for @Bandreescu_!

The 🇨🇦 teenager defeats Kerber 6-4, 3-6, 6-4 to claim the title at the @BNPPARIBASOPEN! pic.twitter.com/eETRtjoouY

She wears a plastic coiled hairband around her bicep for matches, a tradition she started earlier this year.

“I have never worn these hair ties before, but during preseason I bought a couple, and I was just wearing it around my wrist. And then I was noticing that when I was hitting forehands it kept flying off, so I just put it up there, and it looked decent, so I just kept it,” Andreescu told Tennis.com earlier this year.

You know what they say, if you believe something helps your game – it does.

She explained in her on-court interview the spiral hair tie that she always wears (saying that she’s the only one that wears it), THEN HIT A SIGNED BALL RIGHT INTO MY ARM,l WITH A SPIRAL HAIR TIE! Thank you @Bandreescu_ 😍 #USOPEN pic.twitter.com/PukClhB0zX

“I guess I’m starting a bit of a trend, because a lot of people actually have messaged me about it saying they’re wearing it now too. So it’s pretty nice.”

Success on the tennis court has led to a boost in Bianca’s bank account. Andreescu earned just $215,888 in prize money during her career prior to this year. So far in 2019, she’s earned over $2 million, not including the money she’ll make at the US Open.

Andreescu was born in Mississauga to Romanian parents.

She moved to Romania for a few years as a child, which is where she first picked up a tennis racket at age seven. By age 11, after she returned to Ontario, Andreescu joined Tennis Canada’s National Training Program in Toronto.

By the time she was 14, Bianca was already being anointed as the ‘next one’ in Canadian tennis.

We spoke to @Bandreescu_ about her great 2015. Meet the youngest player in the junior Top 60! http://t.co/Cv8hfbiTxz pic.twitter.com/Z6kGv7pEXJ

So far, she’s living up to the hype.

6. She’s got a chance to go places no Canadian has ever gone

A Canadian has never won a singles title at a Grand Slam, in either the men’s or women’s game.

Andreescu has a tremendous chance to be the first.

Genie Bouchard holds the Canadian record for highest ranking by a female player, reaching No. 5 in 2014. Milos Raonic became the highest-ranked Canadian men’s player ever when he was ranked No. 3 in the world in 2016.

There are many tennis experts that believe Andreescu could become No. 1 some day.

“She’s a big match player, she’s got all the tools,” said Patrick McEnroe of ESPN. “If she stays healthy, within the next couple of years, not only is she going to win multiple majors I believe, I think she’s going to be No. 1 in the world.”

“I have a lot of respect for Bianca. I think she’s amazing. I’m sure she’s going to be No. 1 in the world,” he said. “She has the tennis, she has the physical abilities. She has a great mentality. You can see that she considers herself as a champion, which is very important. Great self confidence.”

Andreescu will take on World No. 25 Elise Mertens during prime time on Wednesday night, with a berth into the semi-finals on the line. Her half of the draw is wide open at the moment, with Naomi Osaka (No. 1) and Simona Halep (No. 4) already eliminated.