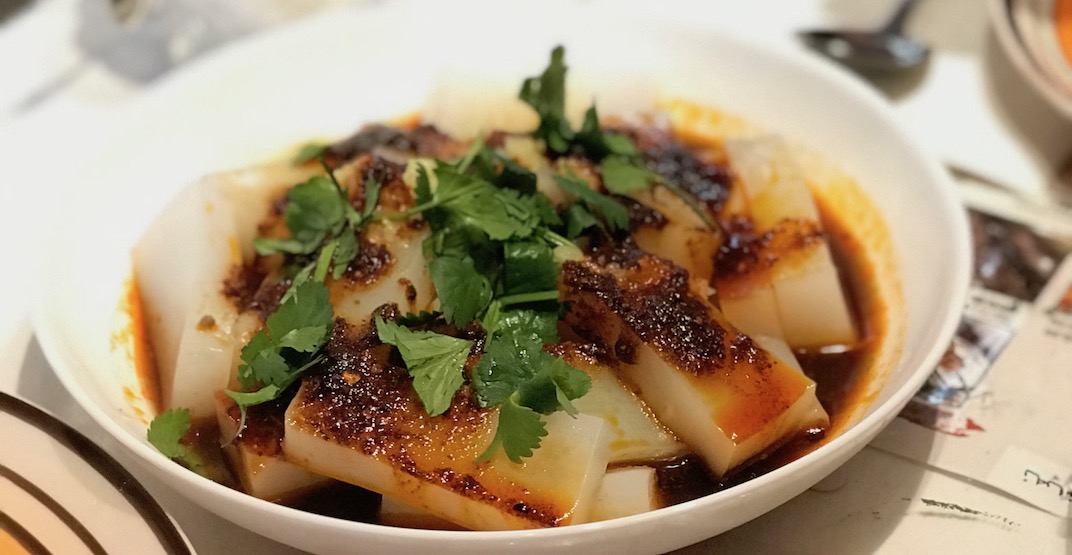 While we’ve covered where to find the best Eastern and Southern regional Chinese in Vancouver, it’s time to lay out where to find top-notch Northern and Western in the city.

Specifically, I’ll be pointing out where to find the regional cooking style of the country’s most western province – Xinjiang (or in English “The New Territories”).

Xinjiang is 1.67 million square km and a province home to 21 million people, mostly the Uyghur ethnic group (who number 14 million in all of China), as well as Kyrgyz, Mongols, ethnic Russians, and Kazakhs. The Uyghur culture and food is distinct and singular.

So why lump two distinct and separate regions into one place? Because restaurants that serve one style will almost always serve the other, Northern and Western Chinese food are synonymous with each other (for the purists I apologize).

This style of Chinese food is probably one of the most interesting because it employs ingredients and cooking techniques that aren’t used anywhere else in China. It’s situated right on the cusp of Central Asia, the transitory, and ancient space between Eastern Europe and Asia that dictated basically all of world history.

Northwestern Chinese food reflects, in a physical form, the Nexus, a literal and figurative crossroads of many peoples, places, and flavours that is very special (and very delicious).

What you can expect from this cuisine is tons of spices like cinnamon, cumin, fennel, coriander, turmeric, chilli, a whole myriad of flavourings. Meats? Mutton, lamb, beef, chicken, but not usually pork (as the people of this region are predominantly and historically Muslim, so they cook Halal).

They use milk and all its secondary products – butter, yogurts, and curds. When actual cooking is concerned, you’ll find steaming and stir-frying, very similar to their eastern Chinese counterparts, but also braising, roasting, baking, and barbecue meats along with their carbohydrates – like pilafs and kebabs. It’s so lit.

Big Plate Chicken (transliterated from its name in Chinese) 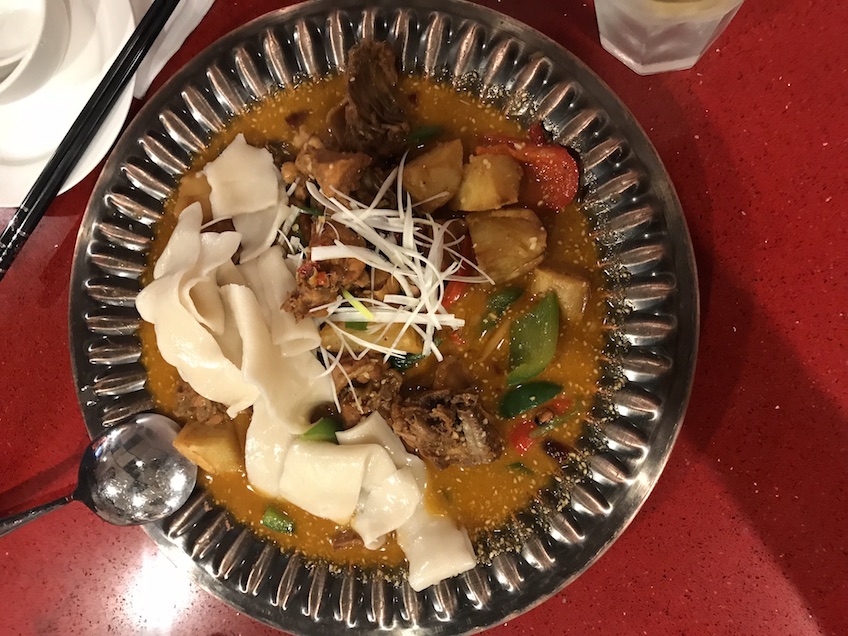 This is one of the most famous dishes to represent Xinjiang food. It’s a mixture of both Eastern Chinese (predominantly Sichuan province by use of chillis and its red colour) and native Xinjiang ingredients. I would liken it almost to a big stew served on a plate, not a bowl. Potatoes, chopped up chicken, chilli peppers, and sometimes even hand-pulled noodles added. The story goes a Sichuan cook was trying to recreate the food from his home province while in Xinjiang, and ended up making this creation.

It’s a hearty, spicy, and straightforward type of cooking. Use the hand-pulled noodles to mop up the spicy gravy. It’s a big haul – bring your crew.

Again, this is a really popular dish at Northwestern restaurants but hails from China’s most central province – Sichuan. Sichuan cooking has had a marked influence on the cuisine of Xinjiang in that they use a lot of the Sichuan’s famous peppercorns that have a numbing effect in the mouth when eaten. If you don’t like spice, pass.

Gentle pieces of white fish are poached in a chilli broth with bean sprouts and peppers. The focus is on the tender white nuggets of the fish and the lovely spiciness that contrasts it when eaten. They break apart in the broth gently, like cloves of garlic.

A very Han Chinese take on a protein used often in the western provinces. Tender ground lamb in a thick hearty skin is boiled and served with black vinegar. The dish is straightforward and comforting. 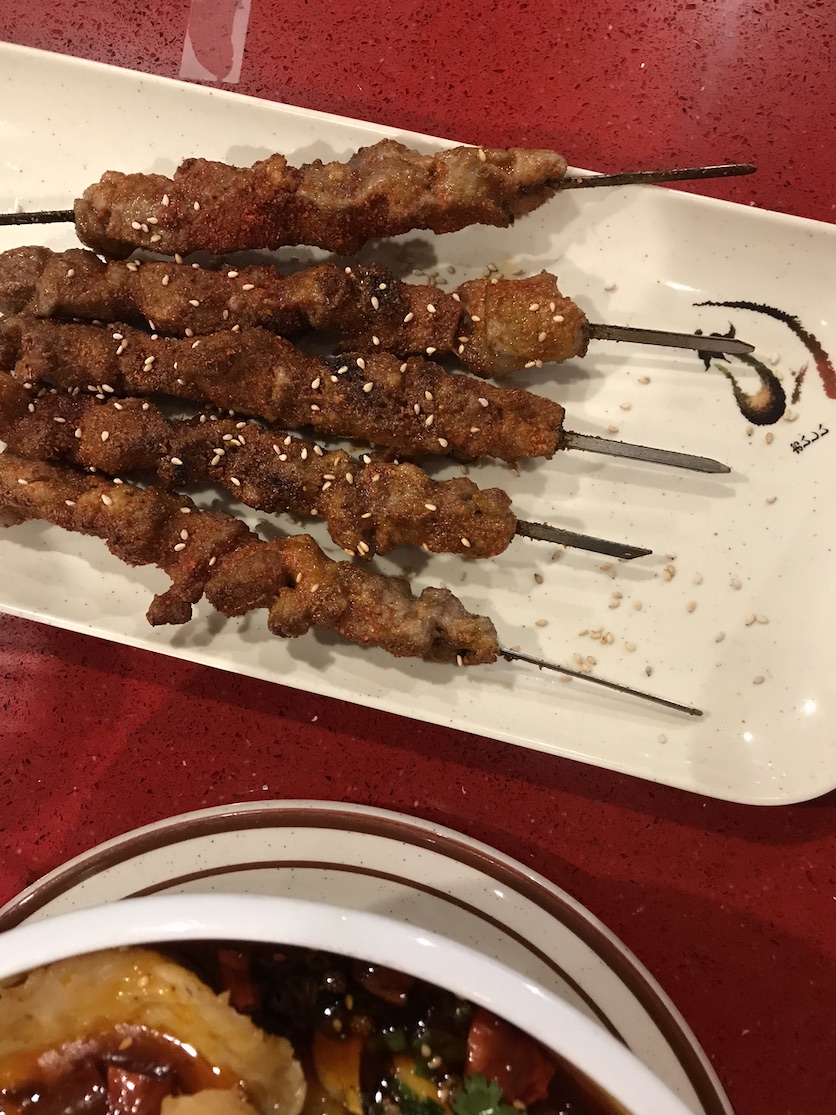 Satisfyingly chewy, salty, spicy pieces of lamb shoulder. Crush it with some beer.

Now usually in other parts of China breads are steamed, fried, or boiled – rarely baked. As you head more west the styles of cooking doughs change with the use of bread baking ovens. Buns are baked and have a welcome familiar texture but that’s where it ends. Break the bread open and stuff in a piece of tender lamb, green onion, cilantro, chilli flakes and sweet soy.

I liked this one a lot. Shao bing is a mixture of filo dough and steamed buns. The bread is chewy but also flaky, split in half and chopped up lamb is stuffed inside with cumin, chilli flakes, green onion, and cilantro.

A marker of a decent Northwestern Chinese restaurant is to see how decently they execute a Big Plate Chicken. They serve theirs with noodles, like at Bei Jiang, but it was a bit milder, which was a nice contrast to what I had at the previous eaterie. Still delicious, still satisfying.

This is a distinct “Han” Chinese dish, mung beed noodles, cool julienned cucumber, a dash of vinegar and chilli oil wake up your palate for what is to come.

Cold steamed chicken, cut, served in a dressing of sweet vinegar and numbing chilli oil. It is so tender and juicy. The mildness of the chicken and spike of chilli oil, then abruptly cut by the black vinegar and a remote sweetness. Bomb.

The noodles at this place were pretty lit. They were gentle and wide cut, like an Italian pappardelle, served with ground meat and green onion. A lovely dish on its own or to accompany your spread.

This is a representative dish of western China. The adored gaminess of mutton, wood ear mushroom, and cubed roasted steam bun are in full effect to enjoy. But it’s surprisingly gentle in flavour. I’ve never had this style of soup anywhere but from Northwestern China. The bits of bread act as dumplings like in a European stew, soaking up the broth and adding texture with their satisfying chewiness. A salt of the earth, hearty dish.

The crust is slightly flakier at this joint and circular. The lamb is still delicious. 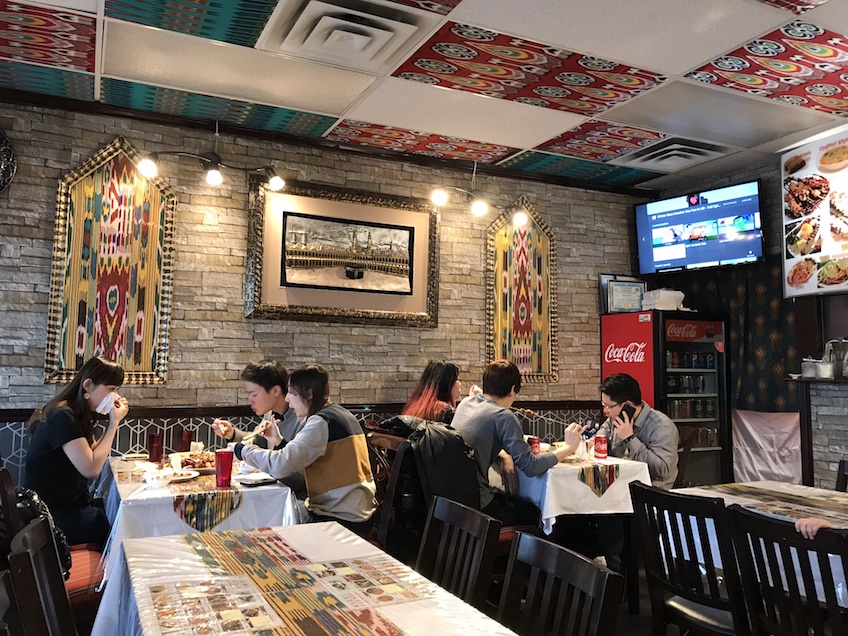 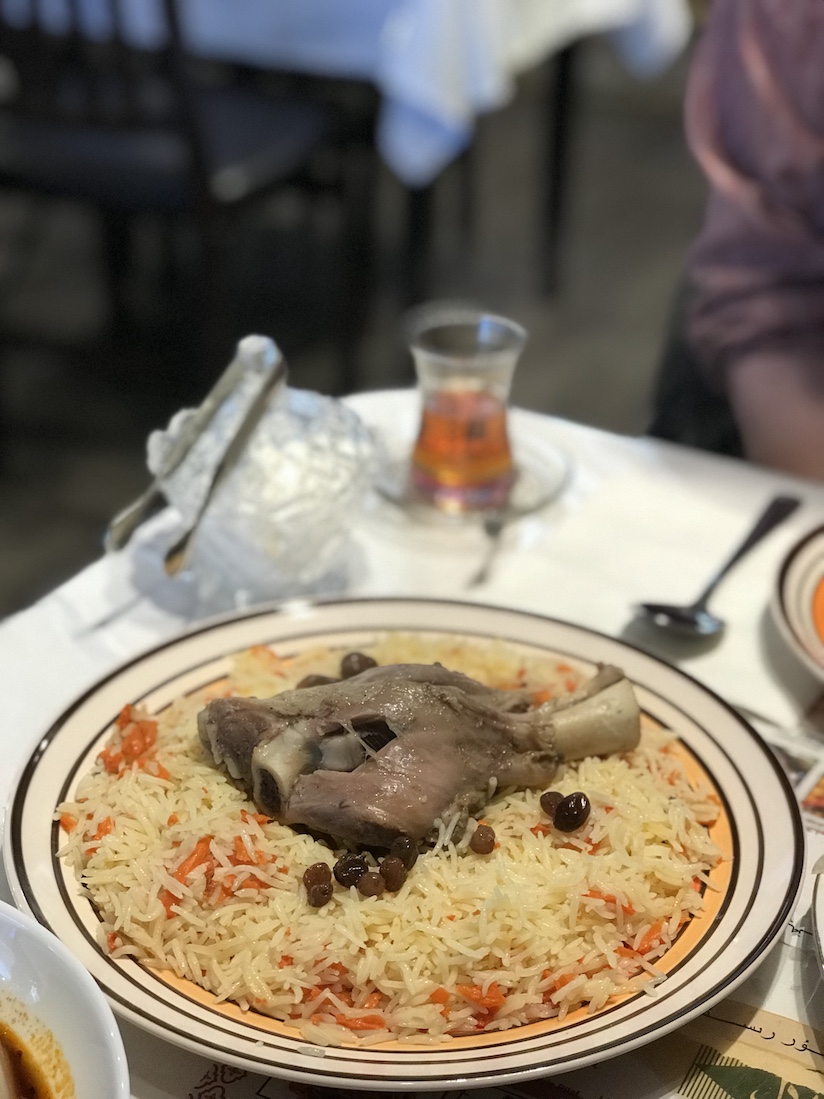 Long grain rice and sultana raisins stud the seasoned bed of carbohydrates for a gently braised lamb shank. You can press your spoon into the meat and it falls off without hindrance. Scoop it with a bit of rice and enjoy hints of cinnamon, sweetness of shredded carrot, the slightly sour raisins, and the fattiness of lamb shank.

The title doesn’t do it justice. The onions are slightly pickled, sliced thin, served with equally thinly sliced green bell pepper, and wedged tomatoes. It feels like you should be eating this in the back alleys of Istanbul.

The plating and flavours are reminiscent of Mediterranean or even Middle Eastern food. I mean, it is, but it fits into the spread we ordered perfectly. A lovely reprieve from spiced meats and carbs to provide a bright acid and freshness between bites.

This dish brings us a bit more back into the “Chinese” realm of flavours that we are more accustomed to. These rectangular prisms of green bean noodle are dressed in Sichuan peppercorn oil and vinegar, then topped with cilantro. It’s served cold to provide a really unique sensation of spiciness to the water temperature. Amazing juxtaposition to the earthiness and richness of lamb.

Mena and her family want to make it clear that when they are cooking something, it’s Uyghur, not Xinjiang and not Chinese. They go heavy on the spices for these almost a foot long skewers. Tear it directly from the skewer with your teeth or use your fork. 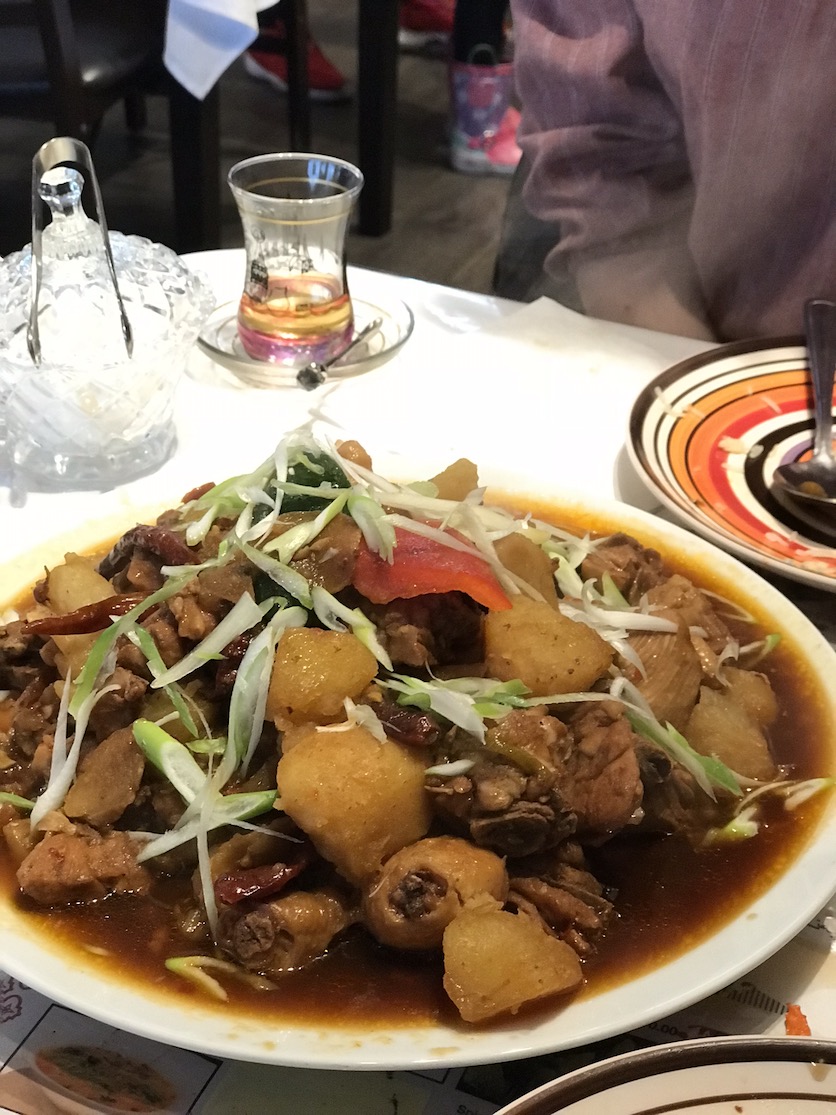 This one (and the other at Beijiang) was my favourite, to be honest. I like heat.

The spice level was a bit above average, but no noodles were served. The potatoes in the dish break down to thicken the gravy.