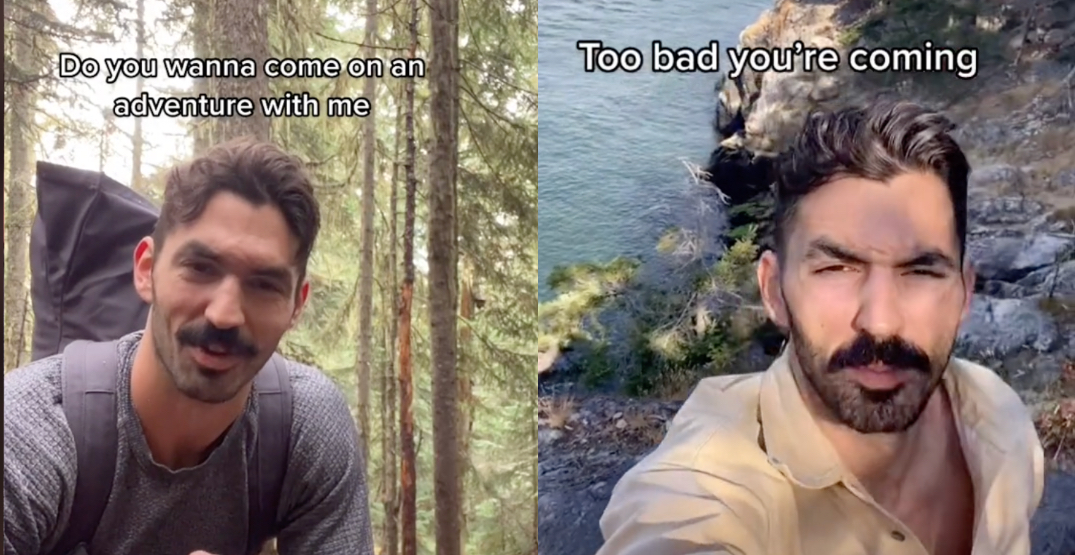 “Do you want to come on an adventure with me?”

If you’ve heard these words before on TikTok, you were probably watching Ben Kielesinski, who’s been digitally dragging viewers on his Vancouver adventures since August 2020.

Ben has 1.6 million followers on TikTok, and his posts routinely receive millions of views. He posts videos of himself bringing the viewer on adventures around the city from the North Shore mountains to his chilly ocean swims.

Daily Hive sat down with Ben to tik-talk about the social media platform and his all-time-favourite Vancouver adventures.

I’m known for taking people on adventures through TikTok. It started about a year ago. August 30 was the first content I really posted on TikTok, but before that, I had the app. I downloaded it in January 2020.

Then COVID hit and I got laid off from my job, like a lot of people did.

I worked in an event business, so that was pretty much gone right away.

And my friend messaged me and was like, “Hey, I know you’re laid off right now. There is this company that’s doing auditions. They want a video adventure, so go out just filming yourself on an adventure and submit that as your application.”

And so I filmed that and uploaded it to TikTok and that was kind of the first adventure video that I made.

I got a lot of comments of people just being like, “Hey, I’m in the UK,” or “I’m in Toronto and we’re in lockdown, we can’t even go outside, I really appreciate you taking us out…thank you for bringing me out into nature.”

And I thought that was really cool, so I just kind of kept doing it.

I love using the seawall. I love biking around the city and I like hitting our local breweries.

What’s the perfect Vancouver adventure to take a date on?

Maybe pick up a snack and go Brewery hopping around there. And if it happens to be sunny, go to Habitat Island in Olympic Village.

Then, take the Water Taxi to under the Granville Bridge with the chandelier and when that turns on, you can surprise your date when it lights up and starts spinning.

And then I’m a big fan of going to the movies. So I would probably do a movie at Fifth Avenue. I like small cinemas, and they have beers there.

I think video is so interesting as opposed to pictures. You’re able to let out a lot more of yourself with the videos and be a lot more creative.

If you have an idea, TikTok lets you show off your idea if it’s making something, or a dance, or comedy, it’s all kind of accepted in one place.

A big thing with TikTok is – as much as it is the content creators putting out media, the comment section is such a wonderful place.

People are contributing to videos through comments. There are times where I’ll watch a video that I think is really funny and then go to the comments, just to see how people are reacting to it.

People can reply to videos and I think you can have a very good community on TikTok and you can add to it.

I think that’s why it’s so valuable and why people have risen to such fame so quickly because of this app. One video can tell so much about a creator and you can decide to follow that person because of that one video; you get so much more from it.

What if my videos don’t get any views? ☹️

It doesn’t have to be too serious. Trying to not worry about views is a big deal.

If you put something out and people don’t see it – it’s not necessarily that it’s bad. Just because something got a low amount of views doesn’t mean it shouldn’t discourage people from continuing to make videos.

Forgive me for asking, is there a story behind your moustache?

It was just kind of like a joke at first. I’ll keep it until I’m ready for it to be gone. I definitely don’t want to be just “you’re that guy with the moustache” forever.

As soon as people are getting really comfortable with it, maybe I’ll get rid of it.

How do you plan your adventures?

It really depends on how I’m feeling for the day. I try not to plan things too much. I don’t want to have to worry about making this special content when it is really important to me that I’m out there experiencing the outdoors and enjoying it.

If it’s a hike, I’ll look up the hike details on a hiking website, just to see the time and the elevation gain, is there a water source, all those types of things. If anybody knows that there’s snow, you can look up recent reviews that people have done.

What do you hope people get from going on virtual adventures with you?

I also want people to know there are beautiful things in the Parks here, they’re big parks.

Just on the North Shore, there are parks with acres and acres of trees that you can walk through and look at the Moss. There’s like proper animals there and you know, you can all be from 20 minutes away from the parking lot. You don’t have to be breaking a sweat to do it.