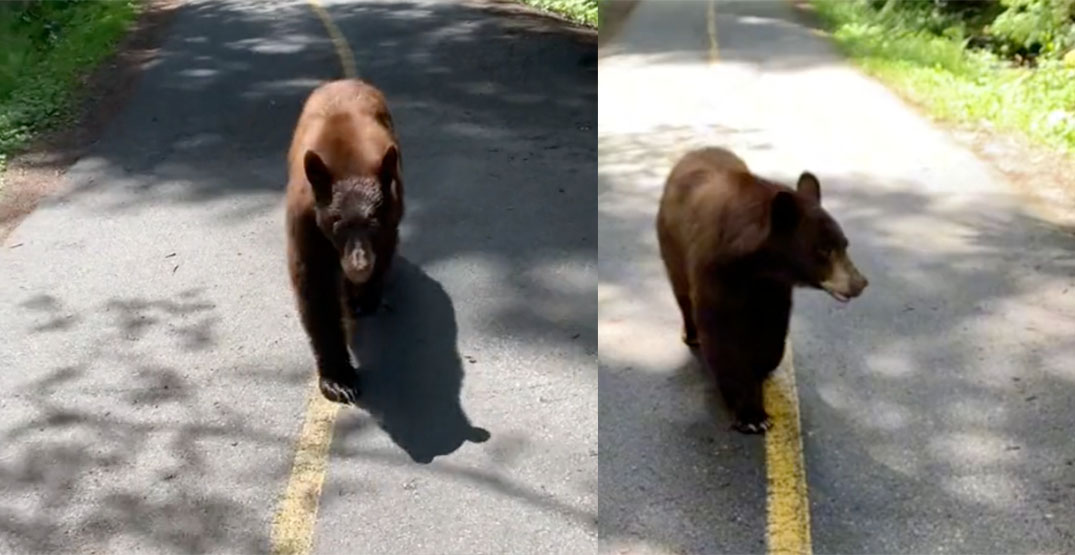 A woman in Whistler who was walking along a paved path was unexpectedly followed by a persistent bear this week.

Jennifer Pierce caught the whole thing on camera and shared footage of the uncomfortable encounter on TikTok Monday.

The video starts with the bear only a couple of metres behind her. The creature has dark brown fur and a brown snout with claws on its feet. It pads along behind Pierce as she says “help.”

Pierce walks backward and remains mostly calm, putting some distance between her and the bear while yelling for assistance.

“I took a leisurely walk in Whistler [and] Mr. Fluffy Bear comes from the bush and sniffs my leg,” she wrote.

The bear follows her for about four minutes.

“Go, go, go away please,” Pierce yells after 2.5 minutes of being followed.

The bear keeps walking behind her, although Pierce expands the distance between them by walking faster.

Eventually, the bear stops for a sniff and goes back into the forest.

“Well, that was too close for comfort,” Pierce says. “Bye bear.”

Daily Hive has reached out to the Resort Municipality of Whistler for comment. According to the Municipality’s website, both black bears and grizzlies are found in the area, but black bears are more likely to become habituated to humans.

Golden Ears Provincial Park in Maple Ridge, BC, is also closed because of a habituated bear.