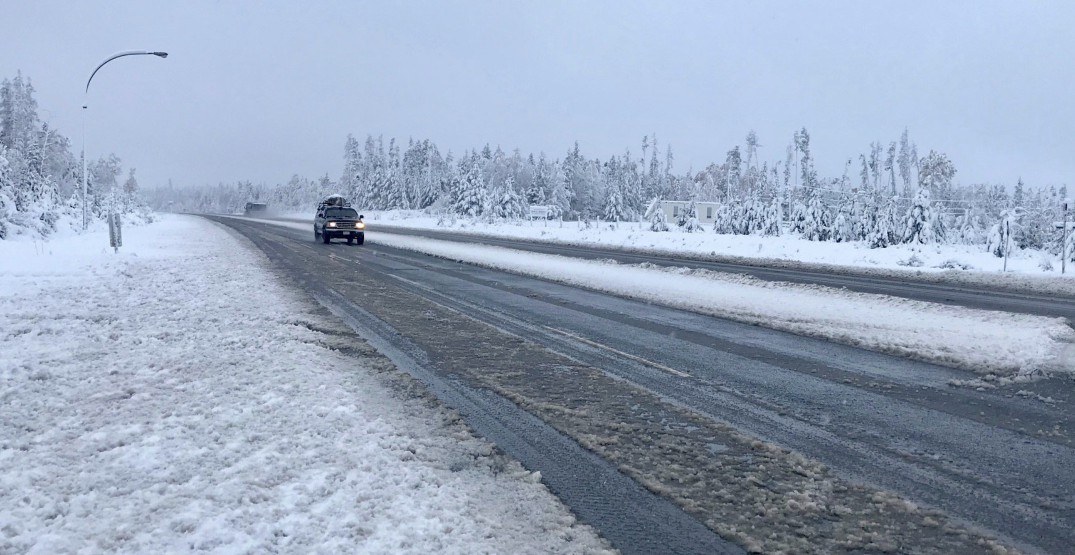 Fall has just arrived but many parts of BC are experiencing winter-like conditions.

The weather agency says that these areas could see up to 10 to 15 cm of snowfall.

It’s almost like mother nature knows the #shiftintowinter drill…
Yes, that is s-s-s-s-s-snow near #GoldenBC this morning.
A perfect visual to remind you that October 1st marks the start of winter tire and chain up requirements on all #BC highways. https://t.co/EvgI5qwa90 pic.twitter.com/ljJIAManBK

Highway 1 at Rogers Pass lots of snow by the way starting today winters tires are mandatory in BC till next Spring #bcstorm via @DriveBC pic.twitter.com/v0wNS4M6IR

#BCHwy97 #southcariboo Snow 11Km’s south of 100 Mile House. Please slow down and use caution for the conditions. pic.twitter.com/SRrnVuXSYH

“Prepare for quickly changing and deteriorating travel conditions. Rapidly accumulating snow could make travel difficult over some locations. Visibility may be suddenly reduced at times in heavy snow,” said Environment Canada, in a statement.

A highway alert is currently in effect for Highway 97 (Clinton to 100 Mile House via Begbie Summit) and on the Tran-Canada Highway (Eagle Pass to Rogers Pass).

Drivers are being reminded that some BC highways require winter tires beginning October 1.

According to a release, drivers are required to use winter tires on their vehicles if they are travelling on BC highways in the following regions: The north, interior, south coast – such as the Sea-to-Sky Highway – and Vancouver Island, such as the Malahat Highway, Highway 4, Highway 14, and Highway 28.

More information on highway tire requirements is available on the Government of BC’s transportation website.

As for Metro Vancouver, the wet weather is expected to continue for the remainder of the week.