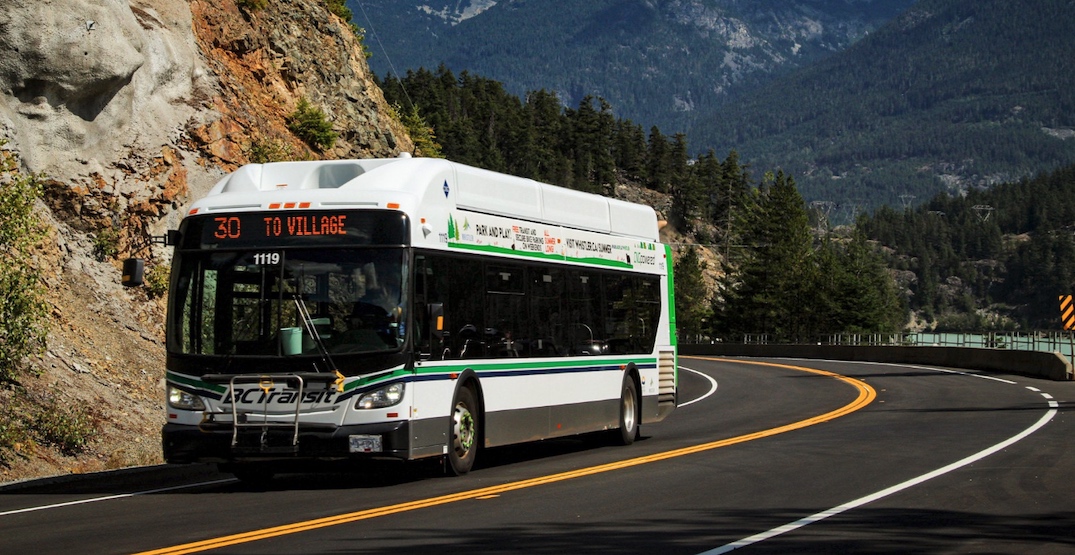 BC Transit bus on the Sea to Sky Highway near Whistler Village. (Trevor Bodnar/Resort Municipality of Whistler)

Public transit bus services operated by BC Transit along the Sea to Sky Corridor will restart this Wednesday, June 22, after an unprecedented service shut down for nearly five months due to labour action.

Bus routes in Whistler, Squamish, and Pemberton will resume at the start of the day, with free rides in effect for the Resort Municipality of Whistler and the District of Squamish for a week — at least until July 3 — to welcome passengers on board, show rider appreciation, and provide time to purchase passes.

Pemberton will also be offering free transit, but its municipal government is still in the process of confirming the end date.

The public transit authority has noted that the municipal governments may also offer other individual fare promotions that will be announced soon.

The labour action of bus drivers and maintenance workers for BC Transit’s services along the Sea to Sky Corridor ended on June 14, when members of the union voted in favour of the negotiated contract with the employer. The five-year collective agreement, retroactive to April 2022, provides a 15.5% pay increase over the life of the contract, and members also won concessions on their pensions and gained benefit coverage for part-time workers, who were previously excluded from benefits.

But with the strike lasting for 136 consecutive days, making it the longest public transit strike in BC history, BC Transit was unable to restart services immediately after the affirmative vote on the contract.

The public transit authority states that after being away from the bus steering wheels for months, bus drivers need to refresh their training to ensure a safe return to service. This process includes familiarizing themselves with the operational processes, duties, and equipment, which is “a standard procedure when resuming service after a certain amount of time away from day-to-day service.”