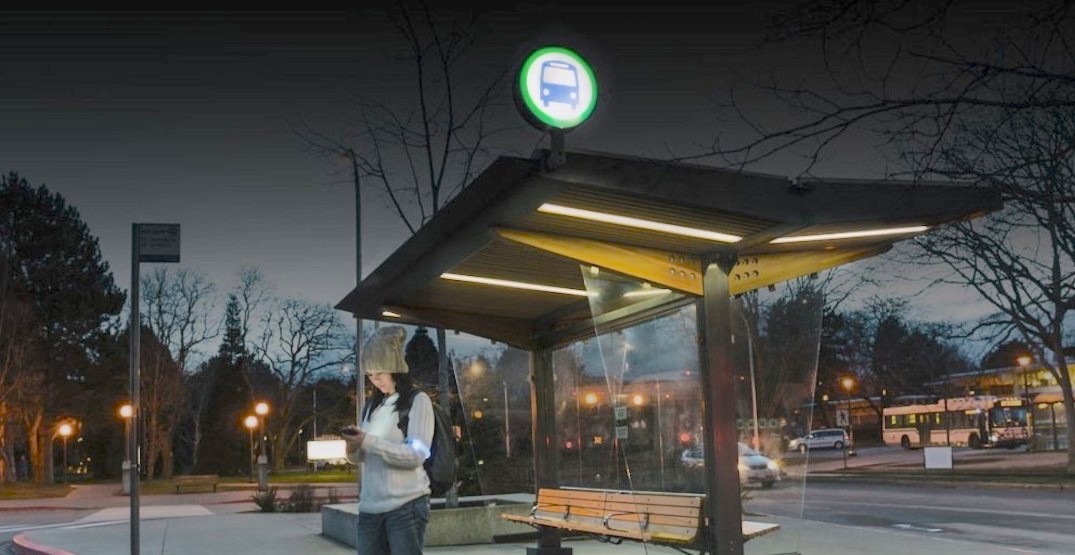 Approximately $5 million will be spent on new and improved bus stop shelters used by BC Transit services across the province.

The provincial and federal governments announced today they will each spend $1.9 million to install 150 new and refitted bus shelters. Another $1 million will be provided by municipal governments through BC Transit.

“On behalf of our local government partners, thank you to the Government of Canada and the Province of BC for continuing to invest in the future of public transit,” said Erinn Pinkerton, the president and CEO of BC Transit, in a statement.

“We have received positive feedback on the bus shelters program from our partners, and this second phase means even more communities across British Columbia will enjoy the benefits of shelters for their residents.”

The weather-specific upgrades and improved lighting and seating for bus shelters will improve the comfort and experience of bus travel. 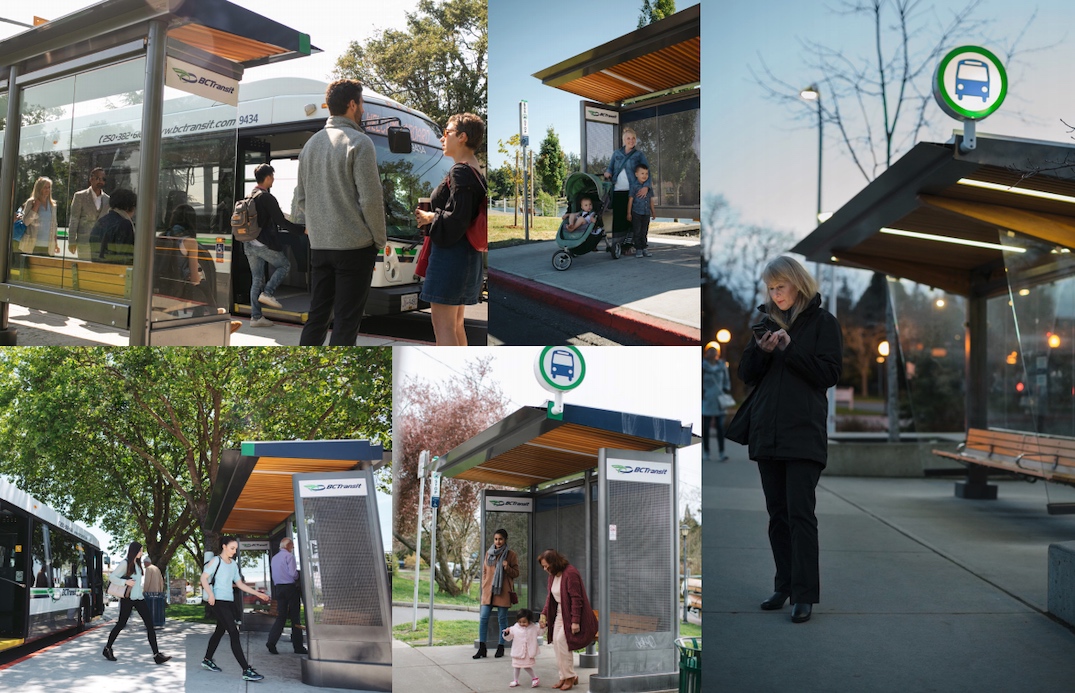 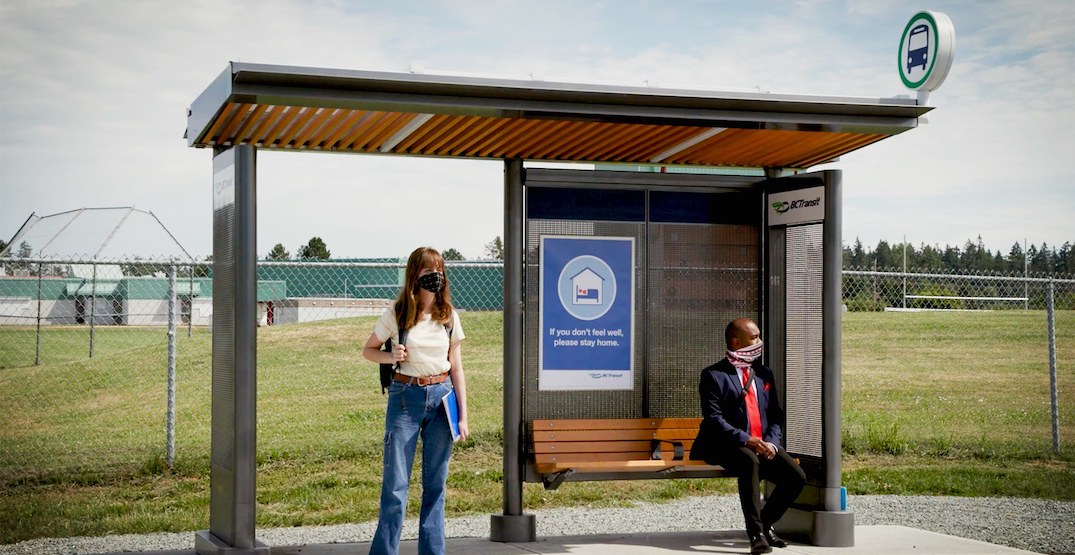 BC Transit has been working with municipal governments to install over 500 standardized bus shelters across the province since 2010.

In 2020, it provided an updated overview of bus shelter designs for use, which further standardize the look, feel, and functionality of bus stop amenities.

BC Transit already works with municipal governments on their bus shelter needs, including some capital funding for municipalities to purchase and install improved and standardized bus shelters. Standardization also lowers the design and acquisition costs and timeline incurred by municipalities, and reduces operational and maintenance costs.

The provincial transit authority provides municipalities with a catalogue of bus shelter designs and features that can be ordered.

Varying sizes of roofed shelters accommodate a range of capacity and weather protection needs, and there are also add-ons such as additional and larger benches, map displays, garbage bin, advertising panel, LED grid lighting, solar panels on the roof as an alternative LED lighting option, green roof, USB charging ports, visual indicator button and light for a passenger inside a shelter, bike rack, and bike locker.

Within Metro Vancouver, there is a lack of standardization of the shelters at TransLink bus stops, as this is the responsibility of individual municipal governments. Standardized bus shelters were initially envisioned for RapidBus, but they were ultimately not implemented. 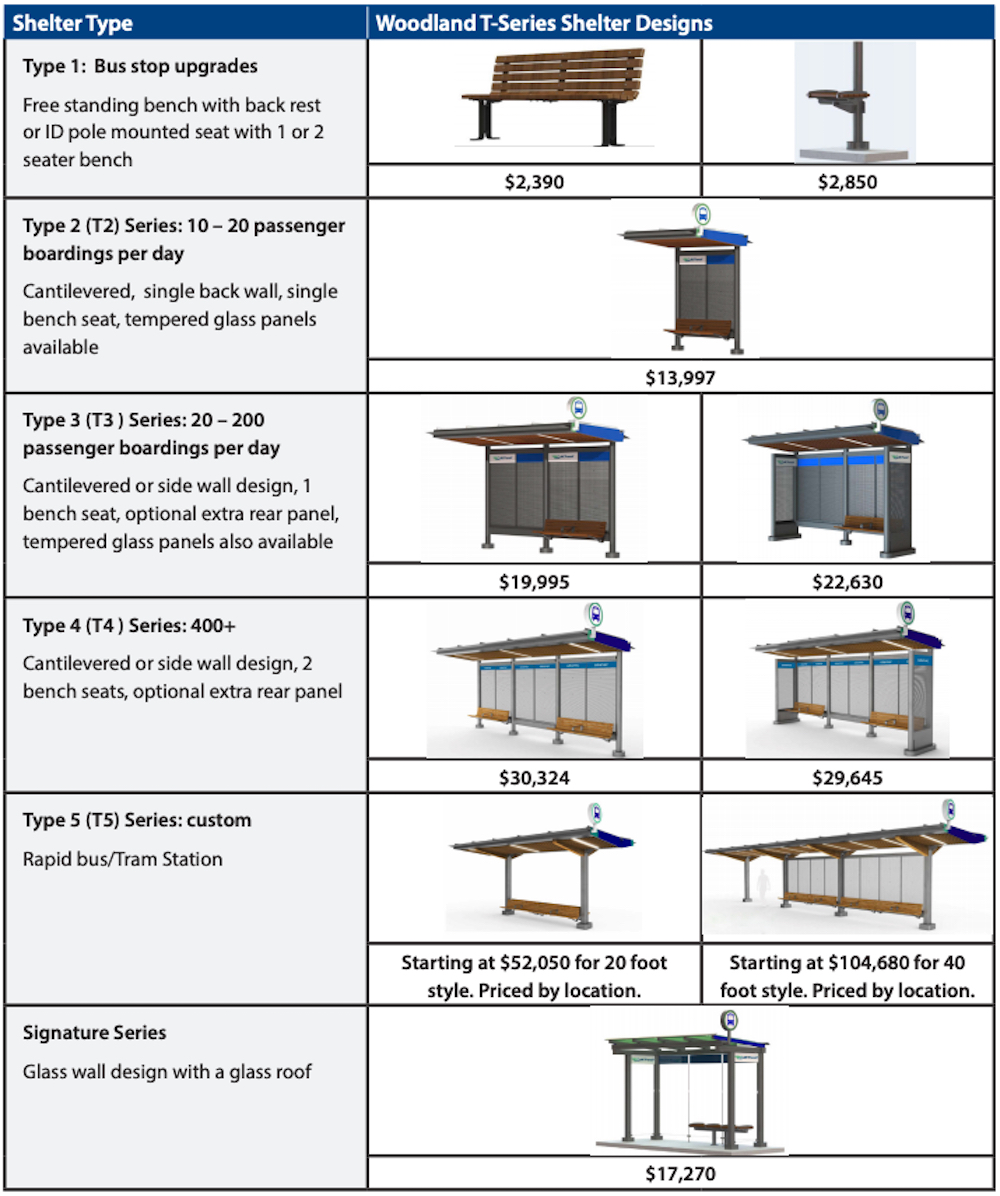 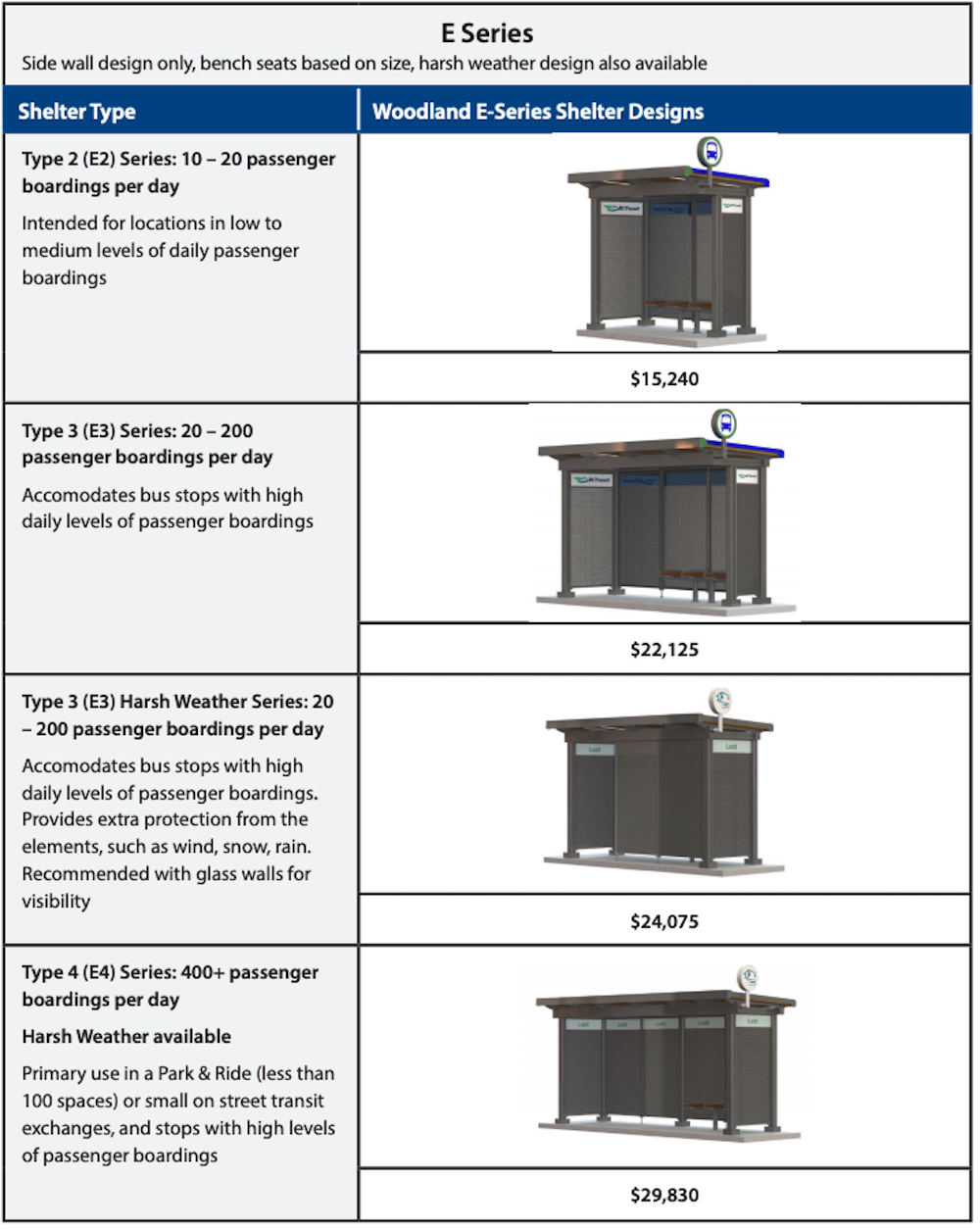 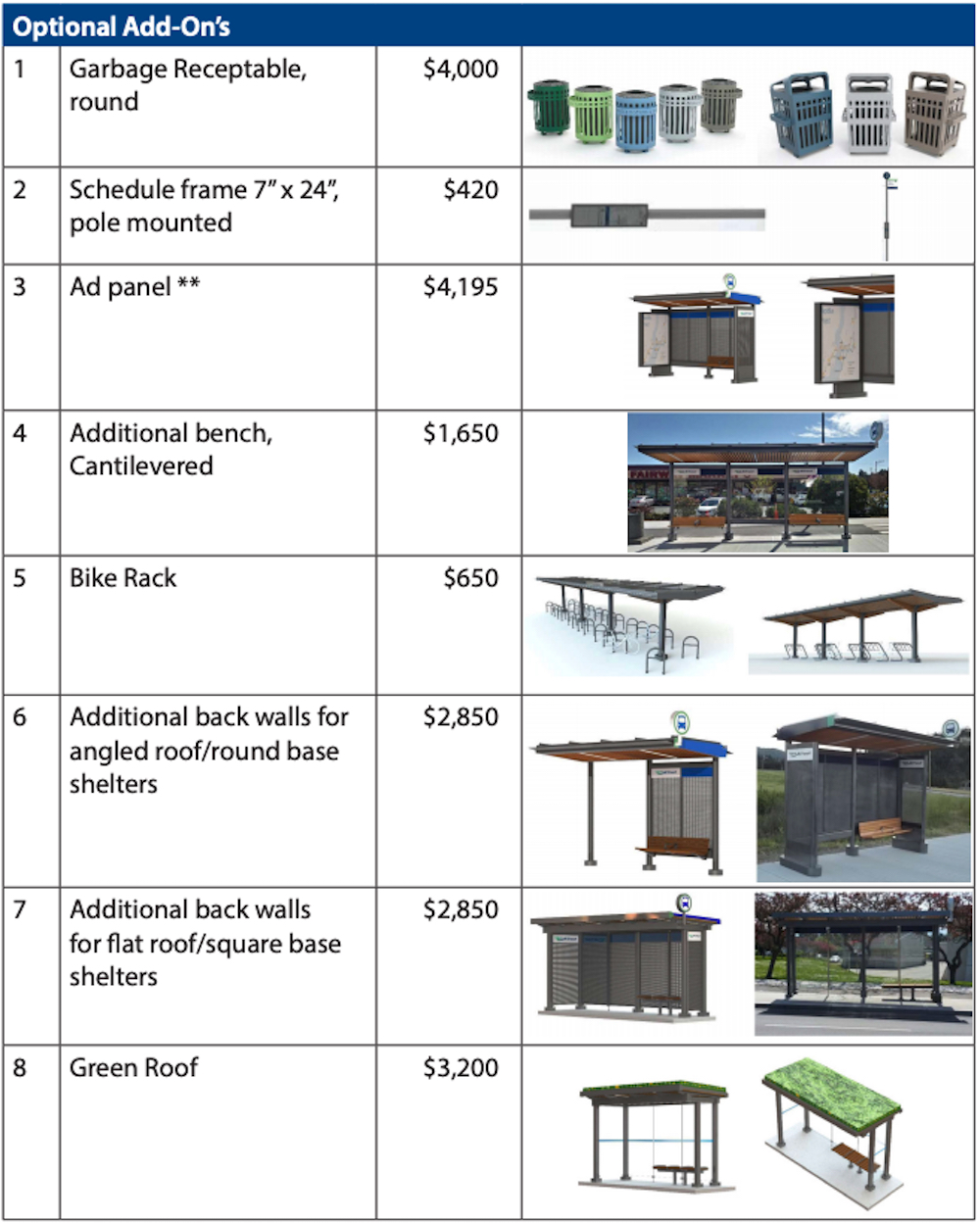 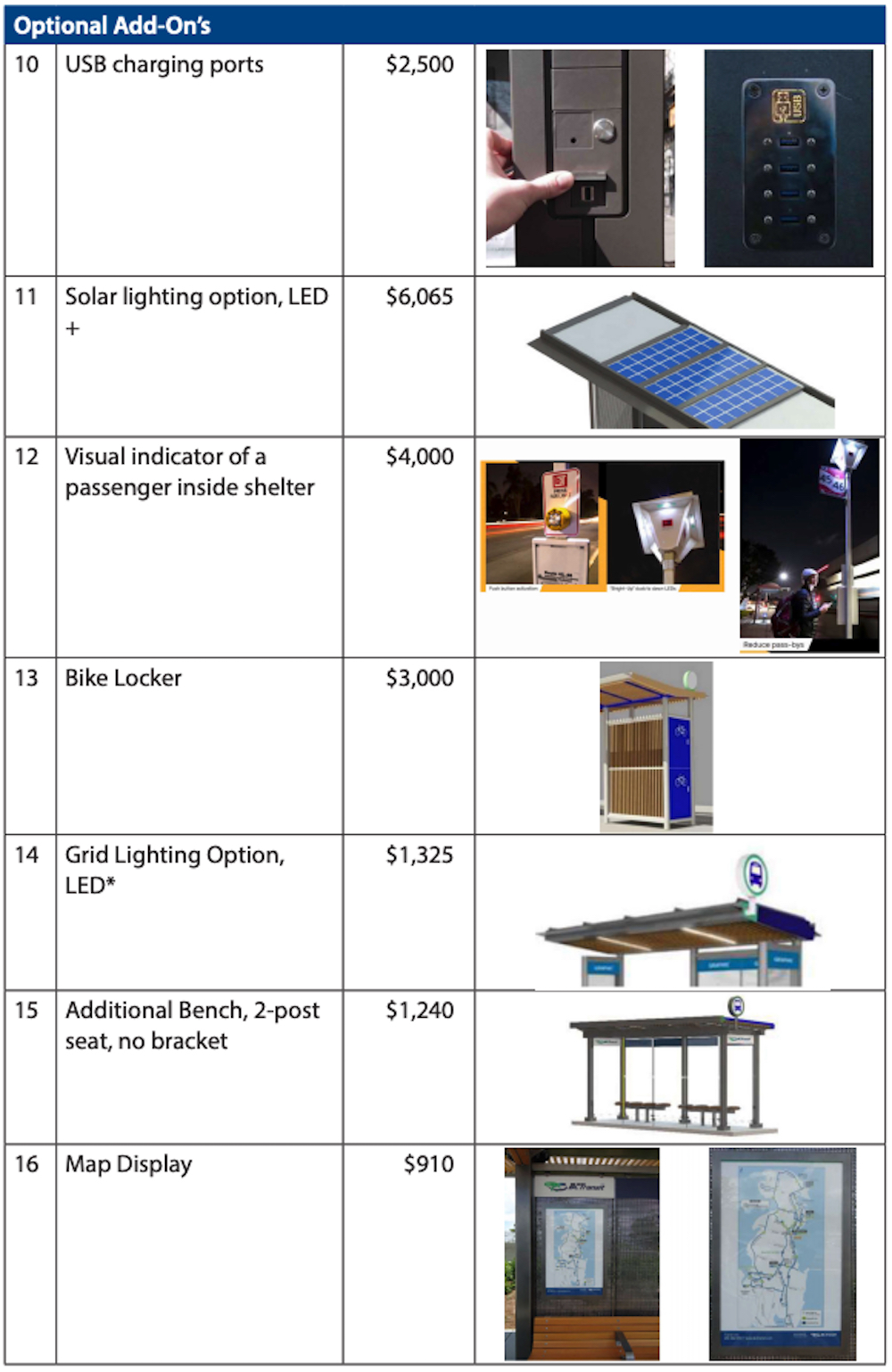 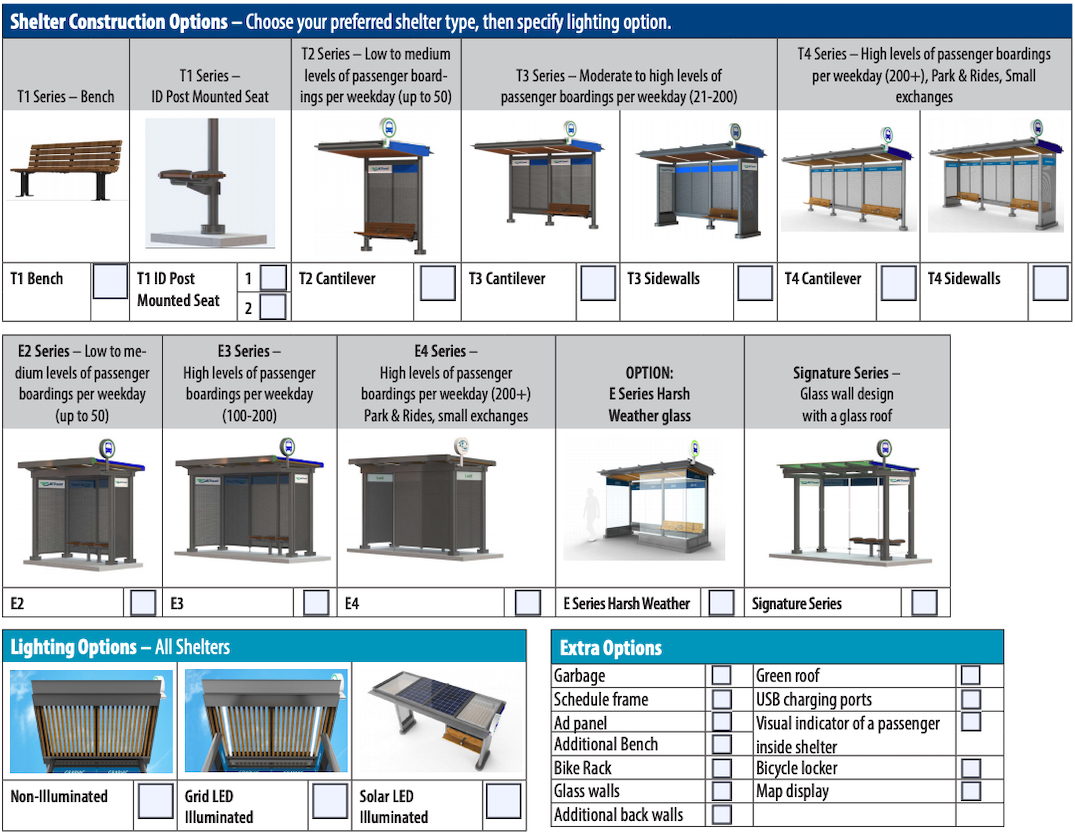