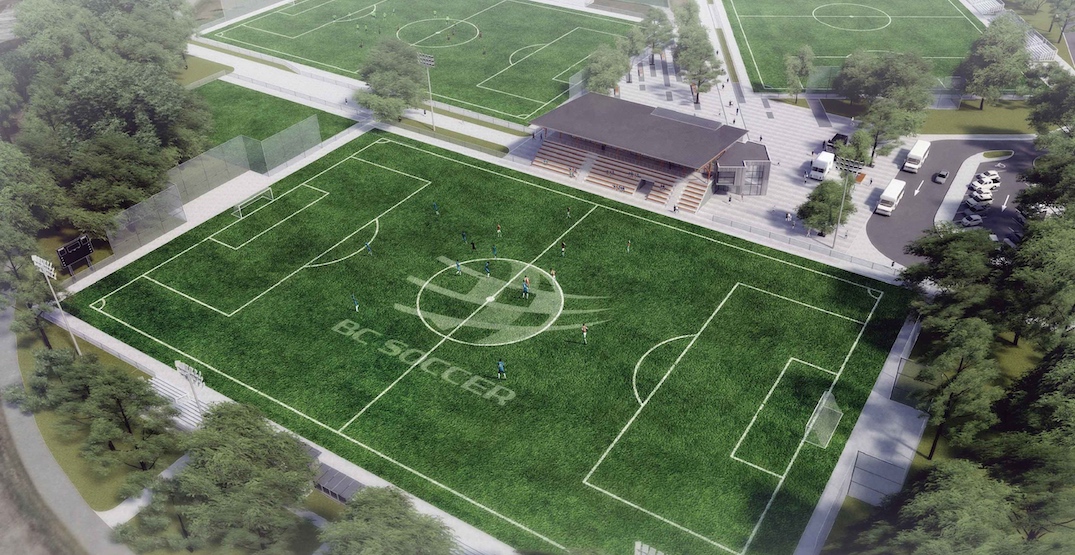 Artistic rendering of Gates Park's conversion into the BC Soccer hub. (City of Port Coquitlam)

A world-class soccer training hub that doubles as the new headquarters office for BC Soccer is being floated for Port Coquitlam.

This would amount to a reconfiguration of the existing sports fields at Gates Park, located immediately west of Port Coquitlam’s downtown.

“We’re very excited to be able to announce this opportunity to the community. It would bring so many benefits to Port Coquitlam including access to a state-of-the-art sports field and amenities for kids and families, increased opportunities for our residents to stay active and healthy, and a new dynamic public space. The project would also support the revitalization of our downtown and deliver economic spinoffs for local businesses,” said Port Coquitlam Mayor Brad West.

“Being the new home for BC Soccer would help raise our community profile, further demonstrate Port Coquitlam’s leadership in amateur sport, and give kids and families in our community affordable access to soccer, field lacrosse and other sports.”

The concept calls for the redesign of the westernmost 10 acres of the 37-acre park, which currently includes several grass and synthetic turf fields, ball diamonds, and tennis courts. 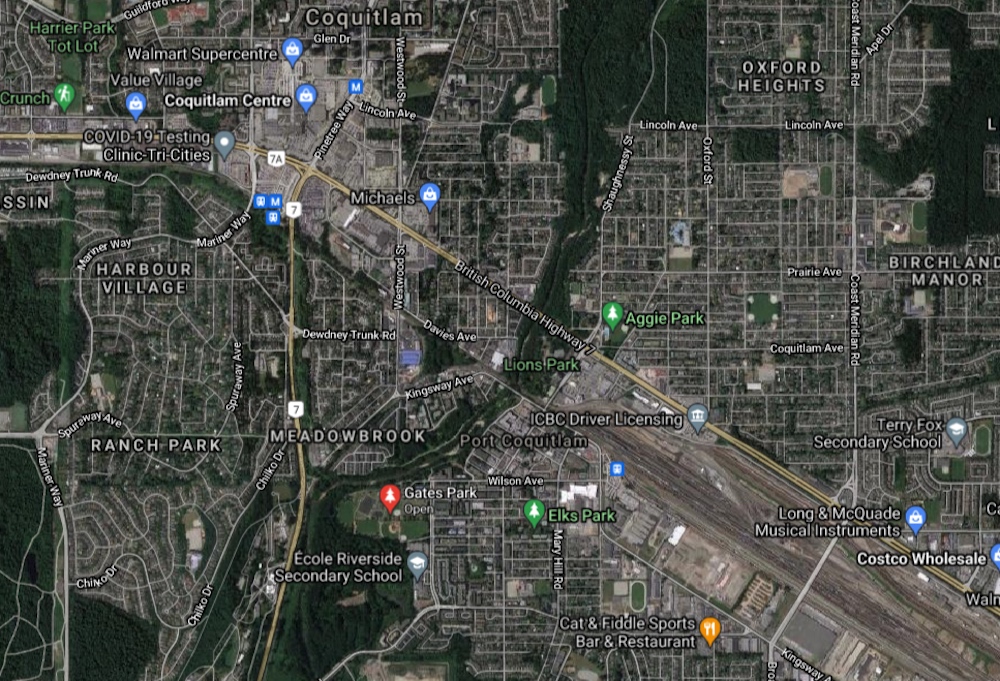 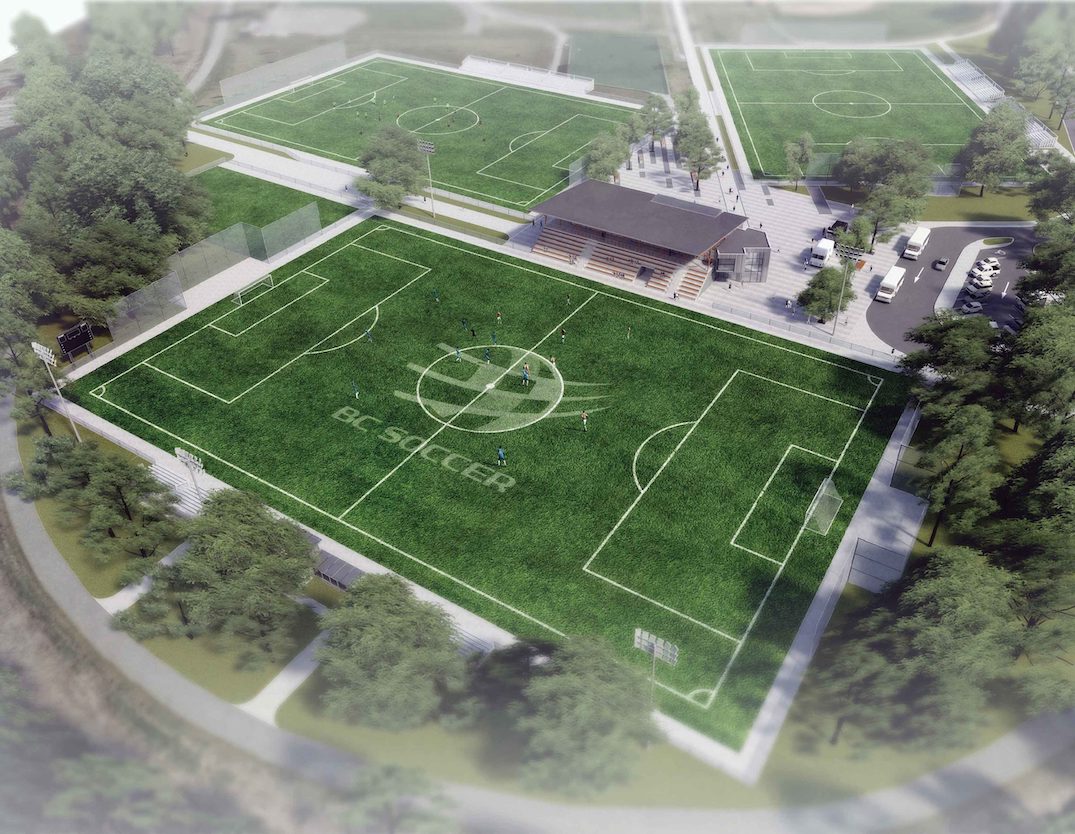 The project would create a new state-of-the-art synthetic turf field built to FIFA international competition standards, accomplished by converting the existing grass field at the far west end of the park. A building with a 12,500 sq ft total floor area would be constructed primarily for BC Soccer’s new office, as well as provide a PoCo Soccer office, storage and meeting spaces, public washrooms, and other amenities.

There would also be new field lighting, covered spectator seating and team benches, and a synthetic turf soccer warmup area.

Additionally, there would be a multi-use public plaza for events, an enhanced central pedestrian boulevard extending to Reeve Street, and a new road along the south side of the park from Reeve Street leading to a parking lot with car and bus parking serving the new hub.

In the future, the facility could be further expanded by converting another grass field at the park into the hub’s second synthetic turf field. 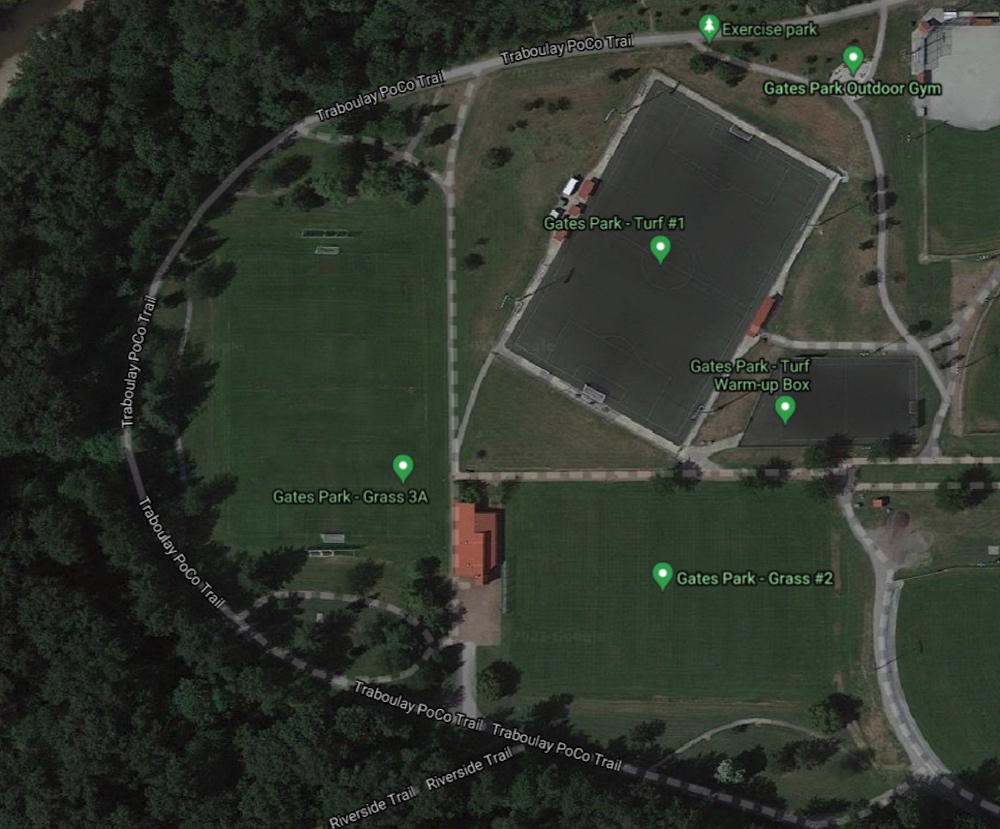 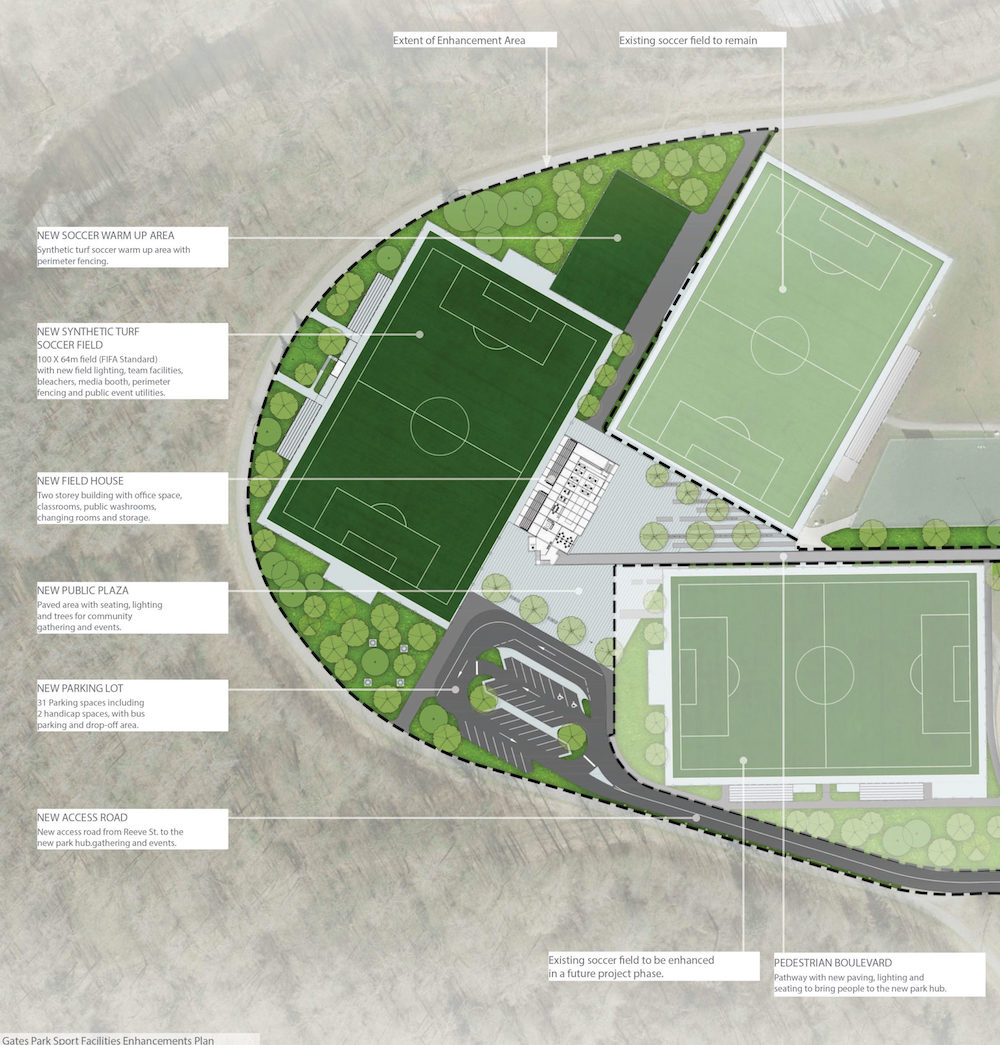 Site plan of Gates Park’s conversion into the BC Soccer hub. (City of Port Coquitlam)

Within Metro Vancouver, this facility would only be second to the 2017-built National Soccer Development Centre at UBC’s Varsity Fields for the Vancouver Whitecaps, national soccer teams, and university teams, as well as the soccer facilities at Burnaby Lake Sports Complex.

Such a facility could open up new hosting opportunities for Port Coquitlam, including lead-up events for the 2026 FIFA World Cup, providing a pre-tournament training base for some of the competing national teams.

For community uses, Port Coquitlam would be guaranteed use of the new turf field for about 80% of the time each year for its local soccer groups. The remainder would be dedicated to BC Soccer for their programming, educational offerings, events, and tournaments. 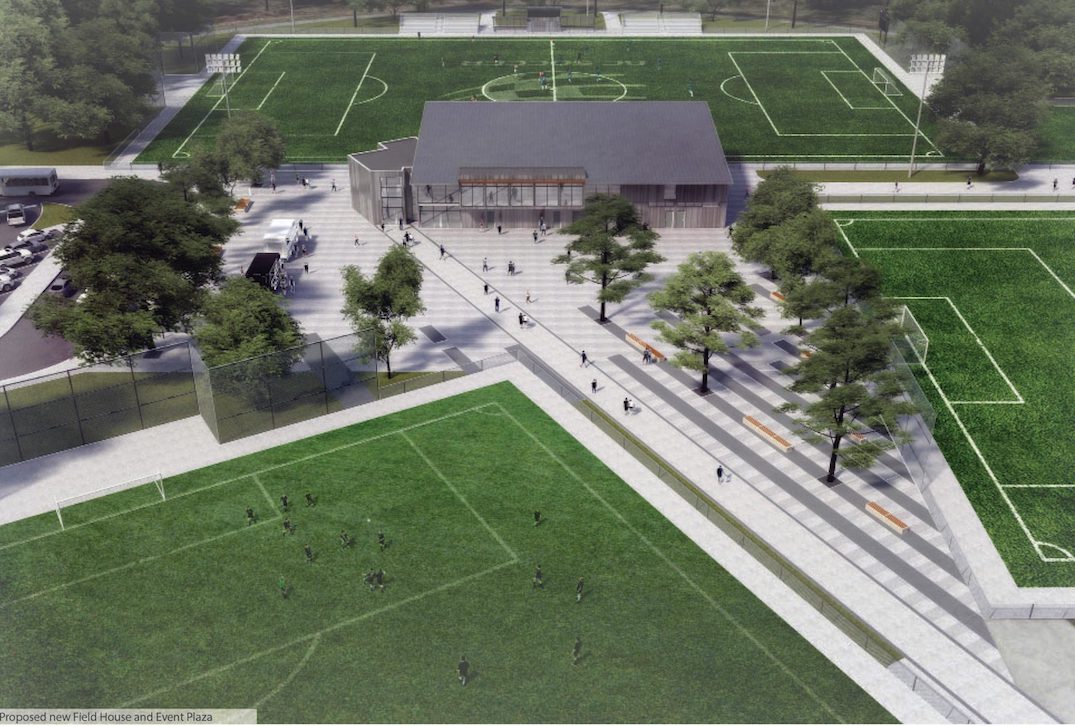 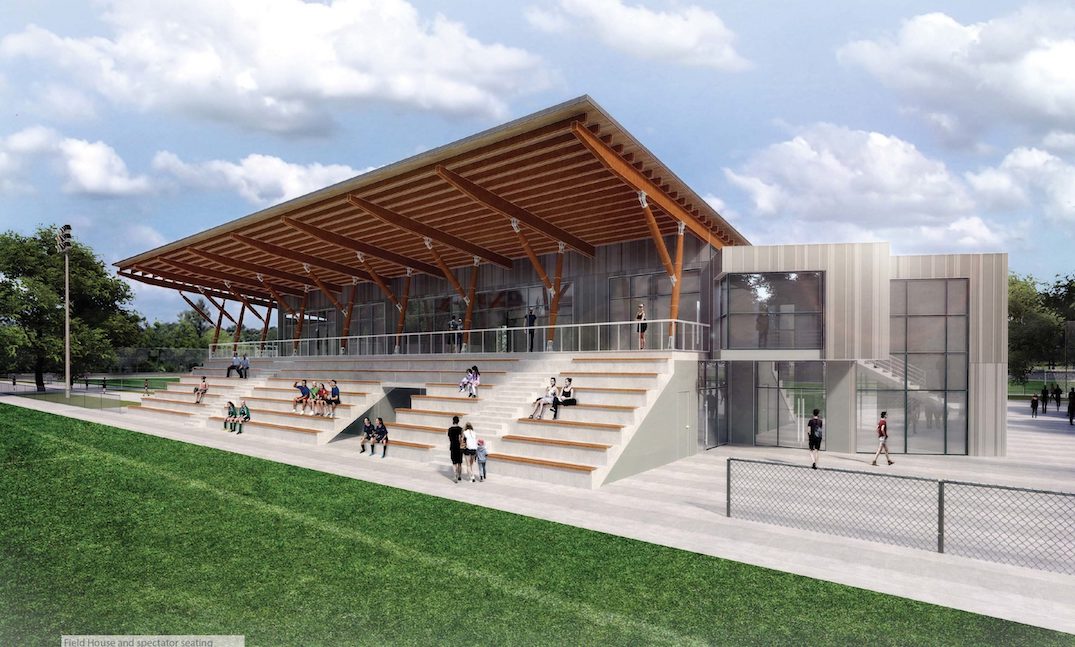 “We’re thrilled about the prospect of working with Port Coquitlam to relocate our head office to a dedicated soccer-specific home for the association at Gates Park,” said Jason Elligott, executive director for BC Soccer.

“Aside from the many benefits for the community, we see this as a big step forward for not only the association but the soccer community in BC.”

The project is expected to carry a total construction cost of $11.4 million, with the municipal government providing up to $2.5 million from its accumulated surplus funds. BC Soccer would match the amount based on membership support, and PoSoccer would contribute $500,000.

BC Soccer and the City of Port Coquitlam are also seeking grant funding from senior governments to cover the remaining $6 million. The construction timeline depends on when funding is fully secured.

Earlier this fall, Port Coquitlam also completed and opened the final phases of its new $132 million community and recreational centre next to downtown.