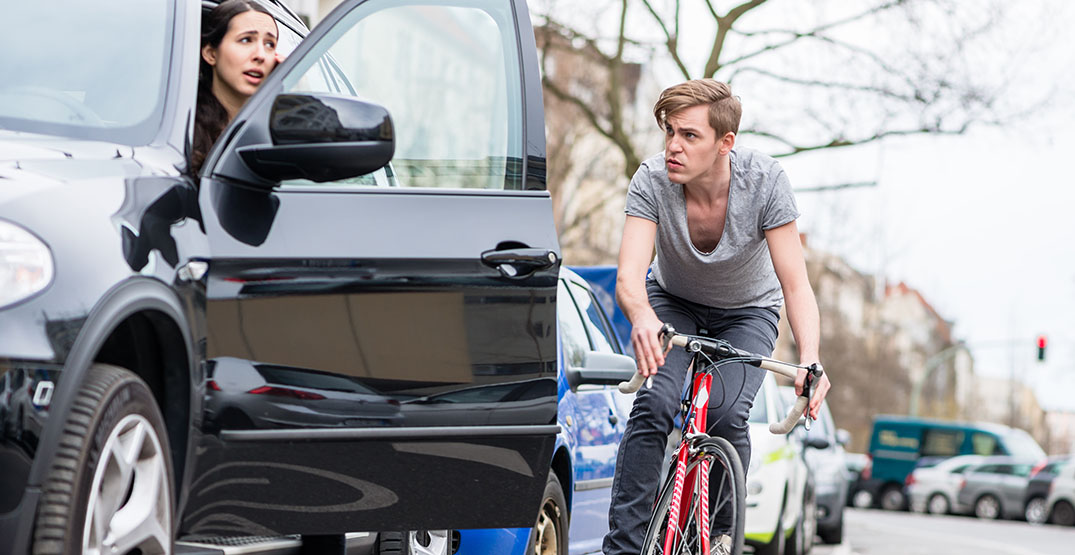 Dooring is when a vehicle driver or passenger opens their door while a cyclist is approaching, and it can end in injury or death for the cyclist who could be thrown into oncoming traffic.

BC’s fine used to be the lowest in Canada, but that will no longer be the case when it increases on September 21, 2020.

“Dooring can cause serious injury, and the new fine reflects that,” Claire Trevena, Minister of Transportation and Infrastructure, said in a news release. “But it is preventable, which is why we are also investing in public education. We want to make sure everyone who uses the roads does so safely.”

Vancouver Police Department media relations officer Sgt. Aaron Roed told Daily Hive that if cyclists are hit by a car or doored they should call 911 right away so officers can investigate — especially if the cyclist is injured.

More commuters in BC use active transport to get to work than any other province in Canada, according to the government news release. With biking becoming increasingly popular, it’s important to keep the roads safe, NDP MLA Bowinn Ma said.

“It is enormously dangerous to carelessly open a door into the pathway of a person moving on a bike. This increased fine sends a strong signal of the level of accountability that is expected of people who are operating a vehicle, even when the engine is off,” she said.

Ma’s North Vancouver-Lonsdale riding experienced a cyclist death in 2019 as a result of dooring.

The move is part of the NDP governments Vision Zero plan to see no traffic fatalities.

“We must continue to make our roads safer by building safer infrastructure and increasing fines for motorist negligence risking injury or death of vulnerable road uses, as well as for aggressive driving, harassment of people cycling and walking, and for theft or tampering with bicycles,” he said in the release.