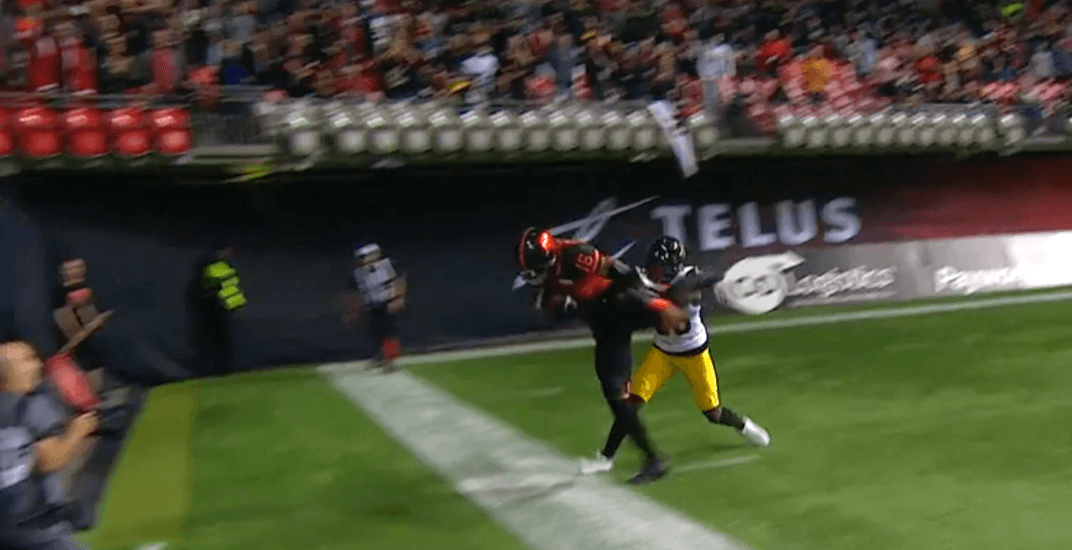 Fans were already heading for the exits.

Hopefully they caught the rest of the game on radio, because they missed a good one.

The BC Lions performed a minor miracle Saturday night, beating the Hamilton Tiger-Cats in improbable fashion, to the delight of the fans that stuck around at BC Place.

Down by eight points on their own 35-yard line with just 33 seconds left in the fourth quarter, quarterback Jonathon Jennings needed to be quick. Given that the Lions had turned the ball over on downs less than a minute earlier, that seemed rather difficult.

But Jennings did move quickly, needing all the remaining time in the 75-yard drive, which included a 39-yard pass to Shaq Johnson. It was capped by a 20-yard Bryan Burnham touchdown catch with no time left on the clock, but BC needed a two-point conversion to send the game into overtime.

That’s when it really got dramatic.

Jennings looked to Burnham again, which wouldn’t have been a good idea if his shoe size was any bigger.

Burnham made a spectacular catch that the officials initially ruled out of bounds. After a lengthy video review, the call was overturned, as Burnham managed to get his big toe down in bounds before falling into a cameraman.

.@BCLions get the 2 point conversion to send the game into OT!!

Bryan Burnham's foot was VERY CLOSE to being out of bounds. 👀#CFLGameDay pic.twitter.com/MytlQRkEQG

Unlike the NFL, CFL rules require just one foot in bounds for a legal catch.

Here’s the view from the cameraman:

“I wasn’t sure man, I wasn’t sure,” Burnham told TSN when asked if he had any doubts he was in-bounds during the review. “The football gods had our back.”

That pushed the game to overtime, where the Lions won on 39-yard field goal by Ty Long.

Ticats coach June Jones will be under fire for some of his decision-making late in the game, as he elected to punt rather than attempt a 45-yard field goal in the final minute of the fourth quarter. He also settled for a field goal in overtime, rather than go for the win on third-and-one at the BC six-yard line.

Starting his first game since Travis Lulay’s injury, Jennings was excellent, throwing for 346 yards, with three touchdowns, and no interceptions. Two of those touchdowns were caught by his favourite receiver Burnham, who made 10 catches for 90 yards.

“God sent a message to me,” Jennings told TSN. “He said ‘miracles don’t happen without impossible’ and it’s funny that it happened like this because we didn’t have much time. It was the last drive of hope and we made it work.”

"I wouldn't pick no other team."

🏈What you've been waiting for after that wild WIN: GAME BALLS from inside the LIONS' DEN

BC (6-6) has won three straight games and all of a sudden, are in good shape in the West Division. With a game in hand on Saskatchewan, Edmonton, and Winnipeg, BC is currently in a playoff spot, as the crossover team. They’re just four points back of the Roughriders for second in the division.

These same two teams will meet again next week, Saturday in Hamilton.