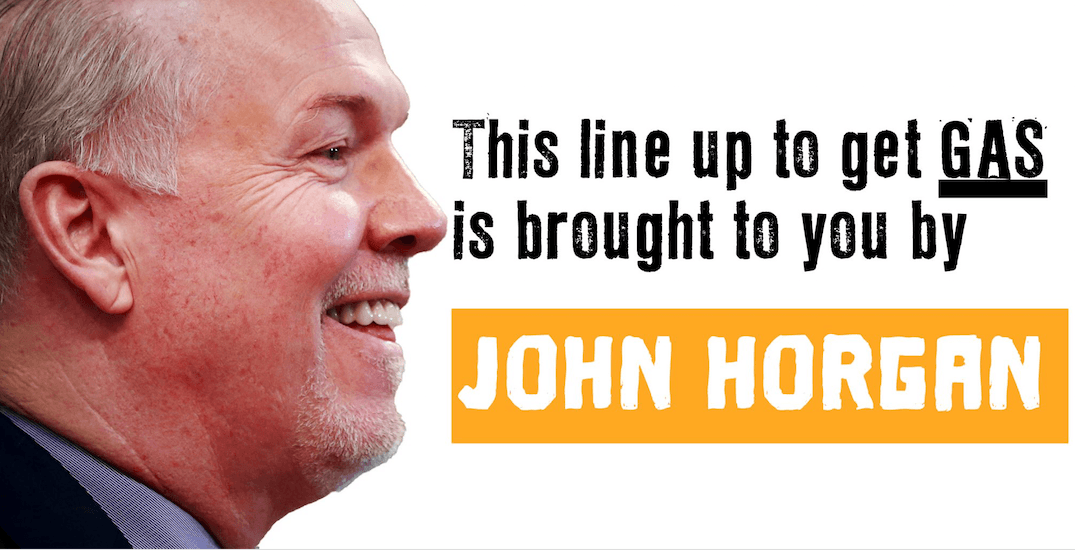 One of the billboards from the BC Liberals currently on display. (Spencer Sproule / Twitter)

With drivers in the Lower Mainland continuing to pay the highest prices for gasoline in Canada, the BC Liberals have launched a new campaign which puts the blame for the high prices solely on the shoulders of BC Premier John Horgan.

Billboards have been erected in places such as next to the Alex Fraser Bridge, at the Massey Tunnel, and at the Peace Arch border crossing.

In a tweet, BC Liberal Leader Andrew Wilkinson’s Chief of Staff Spencer Sproule said the billboards will remain up until Horgan “takes action.”

🚨Attention all border crossers waiting in never ending lines to fill up in Washington State 🚨. John Horgan could take the lead of ⁦@Wilkinson4BC⁩ and reduce B.C. taxes on gas now, but he is refusing. Until he takes action, this billboard will be up at Peace Arch crossing. pic.twitter.com/NlmxaRAwji

Gas prices are through the roof, and no relief is in sight from John Horgan; complete silence from his MLAs. Maybe a bit of pressure might help?

Speaking to reporters earlier this week, Horgan said he – like many commuters – is worried about the continual increase of prices at the pump.

“We’re doing everything we can to try and get those prices down,” he said. “But as everyone will acknowledge, it’s a complicated issue and not something that can be resolved with the waving of a wand.”

He also put some of the blame for the prices on the federal government and its handling and purchase of the Trans Mountain Pipeline, recalling a conversation he had with the Prime Minister’s office on the subject.

“I told them, ‘you own the pipeline, get some gasoline into that pipeline so that we can relieve pressure in the Lower Mainland,'” he said.

Horgan says if the federal government truly sees the pipeline project as being in the national interest, then hopefully, they will also “see a national interest in making rational pricing in the Lower Mainland when it comes to retail gasoline.”

To accomplish this, however, “we need cooperation from Ottawa.”