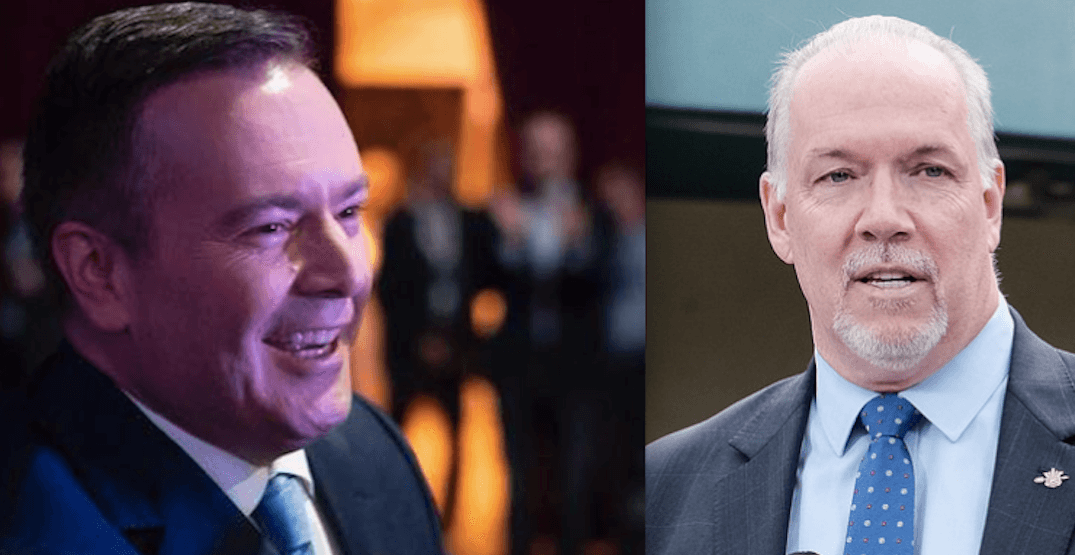 Just hours after Alberta Premier Jason Kenney proclaimed Bill 12:Preserving Canada’s Economic Prosperity Act – better known as the ‘Turn off the Taps’ legislation – BC Premier John Horgan said on Wednesday that his government believes the move is unconstitutional and has responded by filing two actions in court to strike down the bill.

But the move by his government “is not meant to be a provocative action, but one to safeguard the interests of BC in the long-term,” said Horgan.

Horgan said he spoke with Kenney by phone on Tuesday night, in which both parties “agreed to keep lines of communication open” on the subject.

Horgan said that during the call, he “made it clear that my job…is to protect and defend the interests of the province that I represent.”

Calling him a “seasoned and accomplished” politician, Horgan said he doesn’t believe Kenney ran for premier simply to be combative.

“I believe he did so to advance national – as well as Alberta – interests, and I’m hopeful that we can find a way to do that together,” he said. “Alberta has enormous amount of natural gas, as does BC, and it’s all located, by in large, in the same area. There’s opportunities to cooperate there. ”

The premier added he’s “not opposed at all to working with other provinces to advance our mutual interests.”

Asked about notions by Kenney – as well as the BC Liberal Party – that he is solely responsible for high prices at the pump, Horgan said that’s simply not the case.

“Obviously it’s the role of the official opposition to blame someone; they never would take responsibility for 16 years of allowing a situation where refined product in the Lower Mainland got to the point to that is now,” he said. “The travelling public cares not whose finger is pointing where, they want prices to come down.”

As such, Horgan said he’s “tried to take steps working with the federal government – the owners of the pipeline – to try and see some way that we can reduce the export of diluted bitumen and increase refined product coming into the Lower Mainland that will help stabilize prices.”

No delays to permitting process

He noted that when it comes to issuing permits for the Trans Mountain Pipeline extension project, BC has issued 309 out of the 1,182 required permits “and will continue to do as the applications come forward.”

At “no time” over the past two years, said Horgan, “have we disrupted or delayed the permitting process in any way beyond delays required to protect the interest of BC.”

Pressed about the somewhat contradictory optics of BC going to court to argue Alberta doesn’t have the right to restrict fuel, while also going to court to try and restrict the flow of diluted bitumen within its own provincial borders, Horgan said it’s not the same thing.

“What we’re in court doing is asserting our right to regulate products that move within BC,” he said. “With respect to the action by the Alberta government, it is to impair trade between two jurisdictions – so it’s a trade question in the case of Alberta and BC, and it’s a jurisdictional environmental protection issue in our case.”

As for his message to drivers worried about further price increases at the pump?  “I’m worried about it too,” he said. “We’re doing everything we can to try and get those prices down but as everyone will acknowledge, it’s a complicated issue and not something that can be resolved with the waving of a wand.”

“Confident we can get the prices down”

He noted that he’s spoken with the Prime Minister’s office and told them “you own the pipeline, get some gasoline into that pipeline so that we can relieve pressure in the Lower Mainland.”

If the federal government truly sees the pipeline project as being in the national interest, then hopefully, they will also”see a national interest in making rational pricing in the Lower Mainland when it comes to retail gasoline.”

To accomplish this, however,”we need cooperation from Ottawa and we do not need provocative action from our neighbours.”