In what they’re calling an “extremely dangerous” act of vandalism, BC Hydro says a pair of power poles that were cut down with a chainsaw is the culprit behind an almost four-hour long power outage in Port Coquitlam this morning.

According to officials, the two poles were located along railway tracks in Gates Park, and were cut down at approximately 4:30 am. A third pole was cut as well, but managed to still hold up wires.

Along with overhead power lines being brought down, an underground line emerging on one of the poles was severed. Over 4,500 customers lost power as a result. 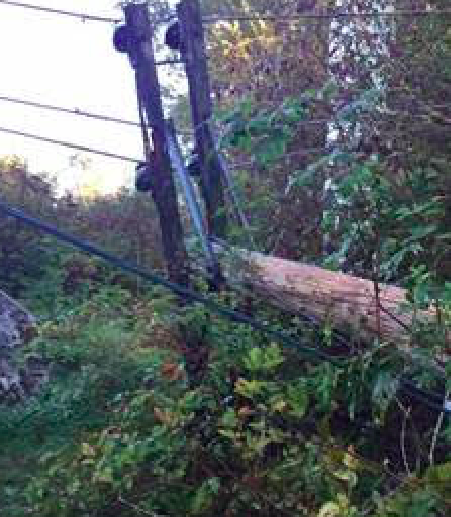 Some of the damage to the power poles. (BC Hydro)

“These poles held three high voltage lines, carrying 12,000 volts each,” said BC Hydro in a statement. “This could have seriously injured or killed a member of the public or our crews as they worked to make repairs.”

Crews attended to the scene to make and restored power to customers around 8 am. Repairs work involved replacing the damaged poles and connecting the power lines.

At this point, officials say the motivation for this “reckless behaviour” is unknown.