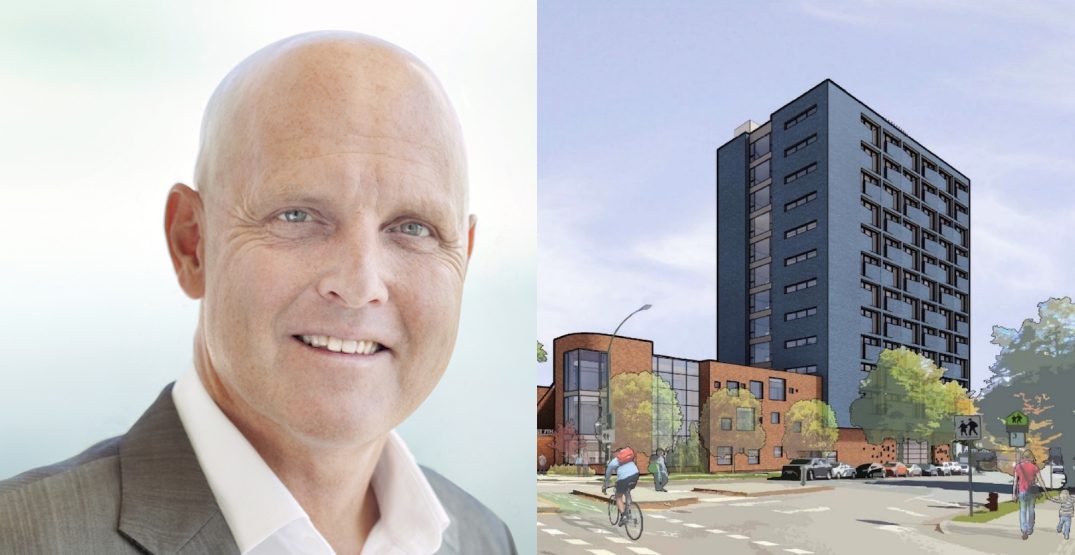 BC Housing CEO Shayne Ramsay (left) and an artistic rendering of the approved social/supportive housing building in Vancouver's Kitsilano neighbourhood (right). (BC Housing)

Shayne Ramsay is leaving his key role with BC Housing, following a turbulent period for the provincial crown corporation exacerbated by the pandemic.

For more than 22 years, he has been serving as the CEO of BC Housing, which is the public organization that plans and executes the provincial government’s low-income housing strategies. His last day with the organization will be September 6, 2022.

With provincial funding, BC Housing’s work includes acquiring land and overseeing the construction of new supportive housing and social housing buildings, as well as other projects relating to assisting individuals experiencing homelessness such as shelters.

Ramsay’s departure follows the abrupt changeover of the makeup of BC Housing’s board of directors, with half of the board replaced effectively immediately last month. Board members appointed within the last five years by the BC NDP government were fired.

Supportive housing projects have riled up some neighbourhoods where they are proposed, most notably the recent approval of a 13-storey building with 129 units of social and supportive housing next to SkyTrain’s future Arbutus Station in Kitsilano. During the public hearing, Ramsay made the rare move of attending Vancouver City Council’s public hearing to speak in favour of the project — something he says he has not previously done in his two-plus decades as BC Housing’s CEO but felt he was compelled to do.

“Do we support this development and, not to put too fine a point on it, save the lives of our neighbours by putting a safe secure roof over their head, or do we kick the can down the road in the name of NIMBYism — right project, wrong location? And that is largely based on fear, ignorance, and discrimination,” said Ramsay during the meeting.

In an open letter Monday announcing his retirement, Ramsay wrote he was “swarmed by opponents and threatened with physical violence” after the City Council meeting on the Kitsilano project, and had to be escorted to a private elevator for his safety. According to Ramsay, the municipal government’s security staff reviewed the recorded CCTV footage of the incident at Vancouver City Hall, and “believe the swarming and threatened punch amounted to assault.”

“This time it was angry words and a fist, next time it could be worse,” he continued. “These incidents are not isolated, nor are they the only incidents that have caused me to lay awake at night. From the Interior to the West Side, doubtless small but vocal groups of people are increasingly angry and increasingly volatile. While one community faces the almost certain prospect of poverty, poor health, violence, and pre-mature death, others are now unwilling to provide a welcoming space, a space that could save lives.”

Although there has been speculation for weeks that Ramsay’s departure is imminent, he states Saturday’s fatal shooting in the Downtown Eastside encampment “finally did it for me.”

“I no longer have confidence I can solve the complex problems facing us at BC Housing,” he wrote.

Despite historic levels of spending — including BC Housing’s practice over the last two years of rampant acquisitions of hotel properties for the rapid delivery of supportive housing — the homelessness, mental health, and opioid crisis in British Columbia continues to worsen.

The immense change in leadership is being made against the backdrop of a highly critical review of BC Housing’s operational practices by third-party consultant Ernst & Young, commissioned by the provincial government.

BC Housing’s mandate has grown enormously under BC NDP governance, which has tasked the crown corporation to lead and execute this government’s enormous affordable housing and homelessness strategies. Their annual budget has increased from $782 million in the 2017/2018 fiscal year to $1.9 billion in 2020/2021.

The 10-year budget for BC Housing through the 2027/2028 fiscal year is buoyed by the provincial government’s $7 billion housing affordability plan.

To meet the objectives, the provincial government also increased BC Housing’s borrowing limit from $165 million to $2.8 billion.

But BC Housing’s practices have not kept up with the exponential growth of its mandate over a short period of time, with the review stating the crown corporation needs to improve its due diligence and risk assessments, and upgrade information technology infrastructure to streamline processes.

Highly unusual for a large government-owned organization that is fed by public funding, the review also found that BC Housing’s “project administration processes are largely undocumented and do not apply a risk-based approach.”

The review suggested BC Housing needs to reform its bidding processes for third-party contractors, and perform improved oversight of these contractors, whether it be non-profit housing operators or design consultants, such as architects and engineers.

According to the review, 80% to 85% of BC Housing’s services are delivered by non-profit housing operators, and the “current oversight processes for these providers are manual in nature with limited ability to objectively assess provider performance (financial and non-financial) and manage overall risk.”

Over the years, the provincial government has been urged to conduct audits of the financial and service performance of non-profit housing operators, which would be a move to also identify potential efficiencies. Such a move has been opposed by organizations and activists.

BC Housing has also been under fire for growing its relationship with Atira Women’s Resource Society to the extent that it is now one of the provincial government’s largest service providers for people experiencing homelessness.

Critics of Atira have suggested the organization is poorly equipped to adequately manage its properties and assist the residents who depend on them. This was made particularly evident by the deadly Winters Hotel fire in Gastown this past spring, which is an Atira SRO property.

Controversy also surrounds this non-profit housing provider’s ethics and practices. For example, there are conflict of interest concerns between BC Housing CEO Shayne Ramsay and Atira CEO Janice Abbott, given that they are a married couple. The relationship was first disclosed in 2010.

Poorly operated social and supportive housing projects, overdose prevention sites, and encampments have led to heightened resentment in residential neighbourhoods and business districts where they are located. Residents, businesses, and community and cultural groups have accused BC Housing, the City of Vancouver, and non-profit housing operators of failing to acknowledge, respond to, and take effective action to address “good neighbour” issues relating to public disorder, public safety, crime, vandalism, and cleanliness.

Both the provincial and municipal governments oversaw the prolonged Oppenheimer and Strathcona encampments. Despite the implemented agreements and strategies to prevent encampments from forming, there are now major encampments in Crab Park on the downtown Vancouver waterfront, and on the sidewalks of East Hastings Street near Main Street — now referred to internally as “Zero Block” — in the Downtown Eastside.

Ramsay’s departure adds to the list of changeovers in provincially significant leadership positions, including the firing of BC Ferries CEO Mark Collins.

All of these leadership changes are strategically being made during a period of transition for the BC NDP government, with Premier John Horgan retiring this fall after a new party leader is selected. David Eby, who is currently the BC attorney general and the minister responsible for housing, including BC Housing, is currently the frontrunner to become the new party leader and by default the new premier.