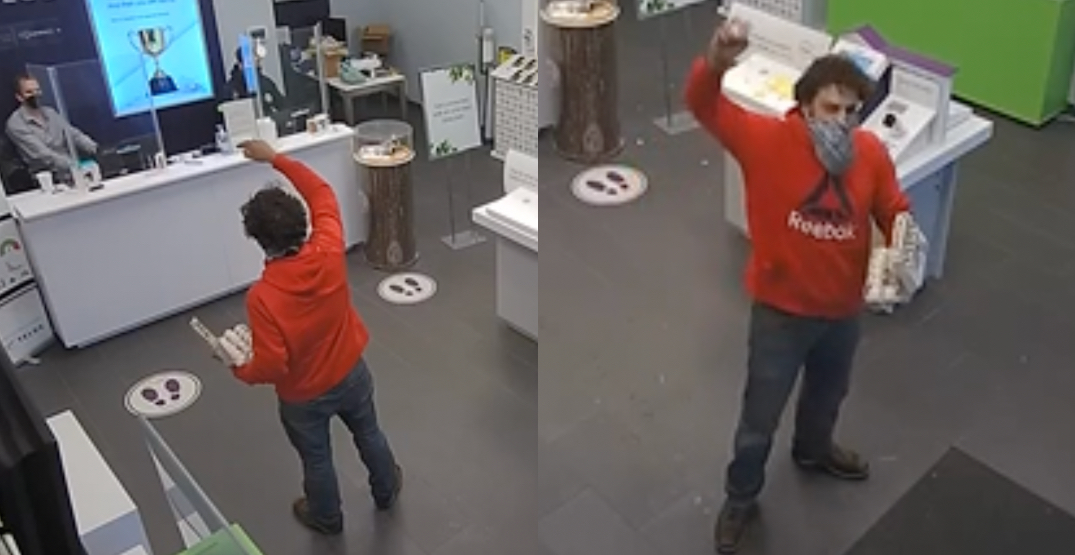 It seems like 5G could be responsible for causing problems in BC, namely a “bizarre” egging incident in Campbell River.

On Saturday, October 16, a man went into a Vancouver Island cellphone store and unloaded a carton of eggs on the store’s displays.

Surveillance video footage shows the man entering the store and talking to the staff behind plexiglass before throwing eggs around while ranting and swearing. The individual was only in the store for a short while.

Spetifore said that “from what we gathered he was under the impression Telus was spying on his devices using 5G technology.”

“The network seems to have raised more concern than others in the past, but this was one of the most bizarre things I’ve seen to date.”

“I feel like this could have all been handled better,” said Spetifore. “Basically, he came in and egged a small local business as we aren’t actually owned by Telus.”

“We had to close the doors for Monday just to clean up, which was a loss of revenue for us. Monday is usually one of our busiest days of the week. From what we’ve heard, he also hit another store down Island earlier in the day, again not owned by Telus.”

“The RCMP were called, and are looking into it,” said Spetifore. Daily Hive has reached out to the Campbell River RCMP and will update this story accordingly.

RCMP shared that they believed this was the only incident, but that it it’s possible there were others that were not reported to police. They’re still investigating and attempting to identify the suspect.

“Sadly, vandalism is a far more prevalent problem in Campbell River than a lot of individuals in the community would believe, and there are simply not enough policing bodies to stake out the communities’ parks, neighbourhoods and construction sites that are being affected by vandals,” said a release.