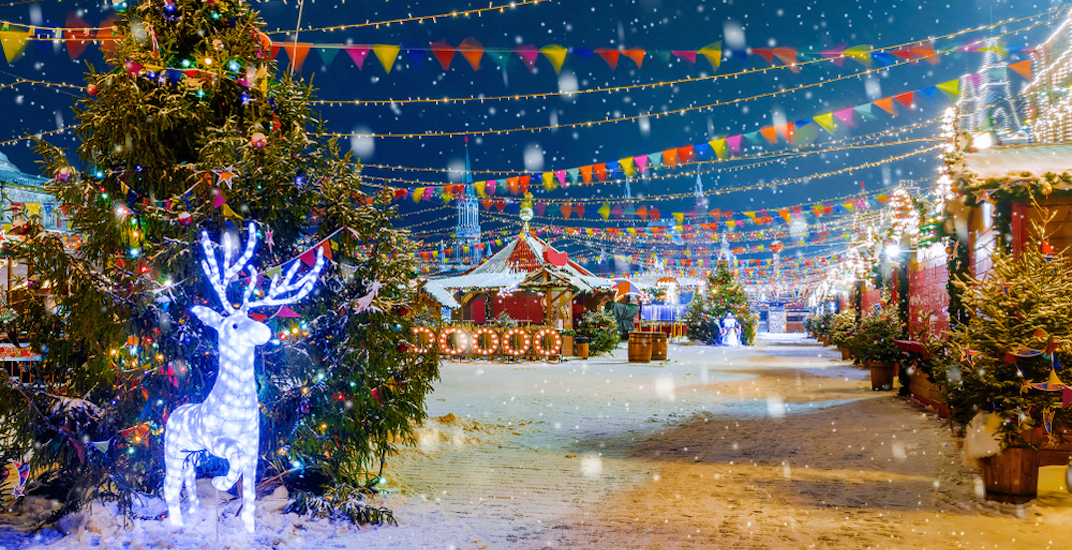 The Concord Pacific lands at Northeast False Creek could be home to a massive wintertime festival this year.

A development application has been submitted to the City of Vancouver to stage Aurora Winter Festival on a four-acre waterfront site wedged by the seawall to the south, Carrall Street to the east, Pacific Boulevard to the north, and the Plaza of Nations to the east. The site is currently vacant and used as a 450-vehicle stall parking lot.

If approved by the municipal government’s permit board, it will run from November 22 to December 30 with a wide variety of activities and entertainment on a scale that is unique to Vancouver. 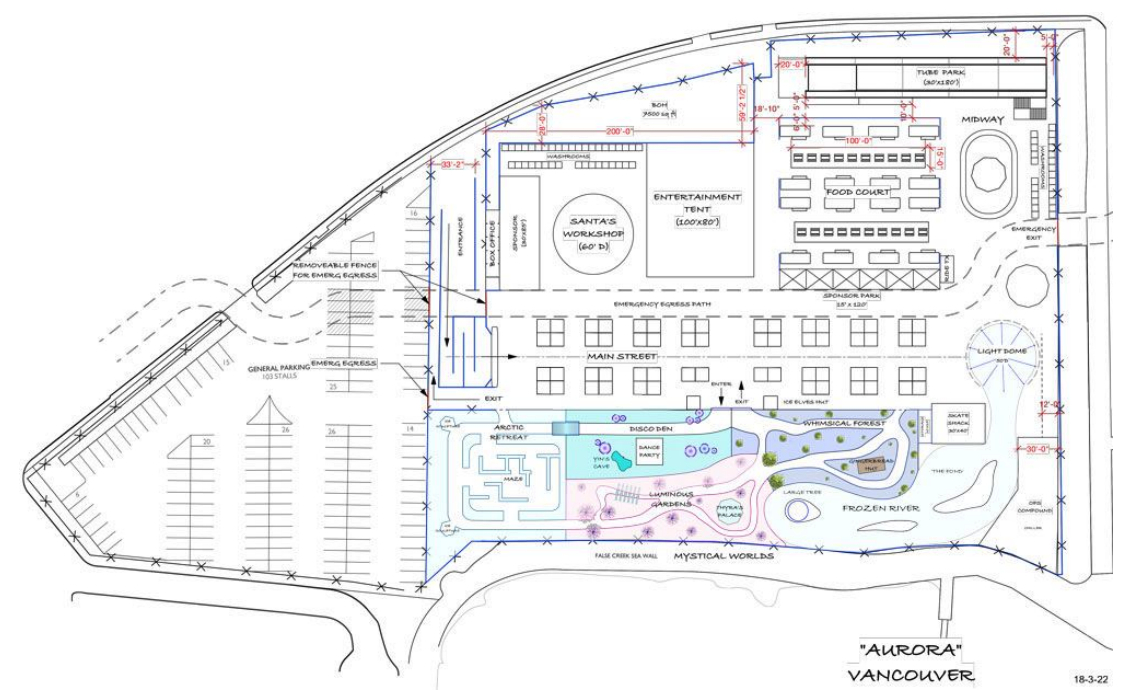 It will open for a total of 33 days, with operating hours set between 4 pm and 10 pm during the weekdays (except Mondays) and 2 pm and 10 pm on weekends.

The site plan will allow for a maximum attendance capacity of up to 6,000 people.

Organizers are proposing the following attractions:

Located at the core of the festival, it will feature about 50 Christmas-inspired outdoor huts selling crafts and homemade treats. The east end of Main Street will be anchored by the Light Dome.

Four uniquely-inspired areas that vary in style, texture, sound, and colour will be featured in this attraction, which includes impressive set designs, giant sculptures, and custom light displays up to 20 ft high. Expect sculptures such as the Yeti, Snow Queen, and Ice Elves. The worlds are: Disco Den, Arctic Retreat, Luminous Gardens, and Whimsical Forest.

A Frozen River for ice skating will be created along the backside of Mystical Worlds to allow attendees to skate along and enjoy the light displays. A real ice surface will be created using a cooling system, and the feature experience of the Frozen River will be the 50-ft-wide, 25-ft-high LED Light dome formed by trussing arches and programmed with the Aurora lights flowing over it.

This will be an area with 15 food trucks on the northeast corner of the site, which includes bistro lighting and additional cover.

A 60-ft diameter dome will be used as Santa’s Workshop with craft stations for kids, and the chance for kids to meet Santa and his Ice Elves.

An 8,000-sq-ft entertainment tent will be programmed with bands and choirs on a small stage, light projections, beverage service, and tables for attendees to eat and drink.

A 47-ft-tall ferris wheel will be one of the highest structures on the site. It will be illuminated at night.

A “family favourite” train ride with a whirlwind of colours and interactive lights and sounds will be specifically geared towards young children.

A classic-like Carousel will feature beautifully painted horses that move up and down as the ride rotates. 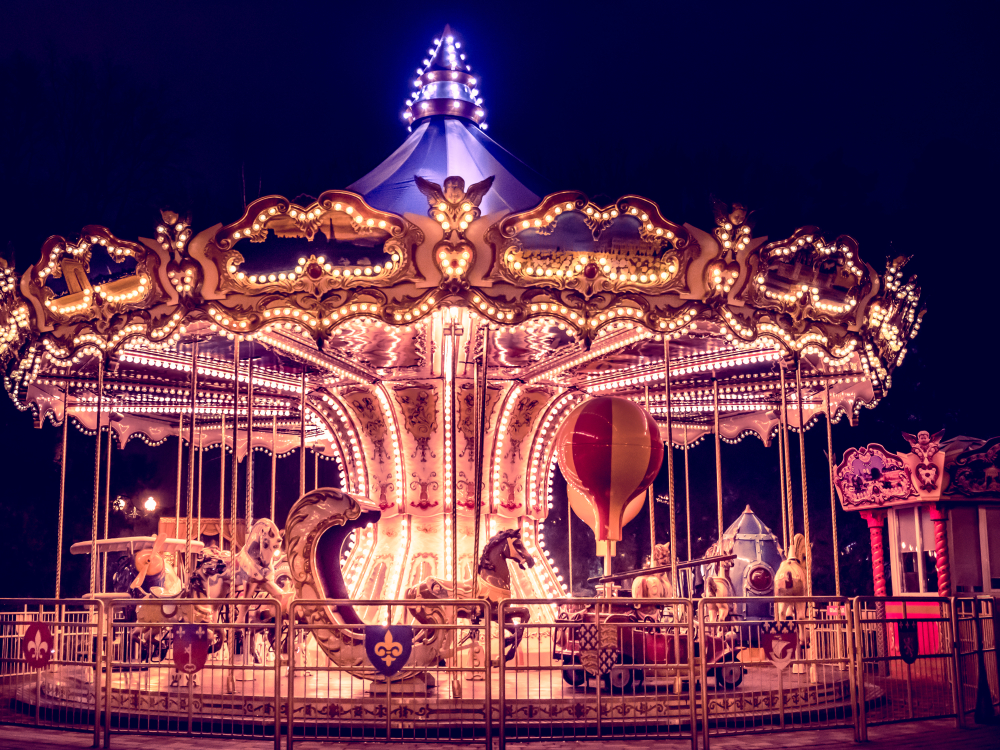 If approved, the attraction will fill a void in the area left by the cancellation of Enchant Christmas Market and Light Maze, which was short-lived after only operating for a single season during the winter of 2016/17. Enchant Christmas relocated to Arlington, Texas as it was unable to find a larger, more suitable location in its home city.

Aurora Winter Festival will also add to Vancouver’s growing number of major wintertime festivals and attractions, including Vancouver Christmas Market at Jack Poole Plaza, the Chinese Lantern Festival at the PNE fairgrounds, and a number of other major Christmas light displays.

The Chinese Lantern Festival is expected to make a return to the PNE this winter following its attendance success this past winter.

Another attraction coming to the Concord Pacific lands, but with a much longer running life, is the Creekside Pop-Up Park that is currently being built. The temporary 3.3-acre park on the easternmost end of the lands – where Cirque du Soleil traditionally erects its ‘Big Top’ tent – will be ready for public enjoyment this summer and will remain at the location for several years until construction begins on the new permanent developments and park space at Northeast False Creek. 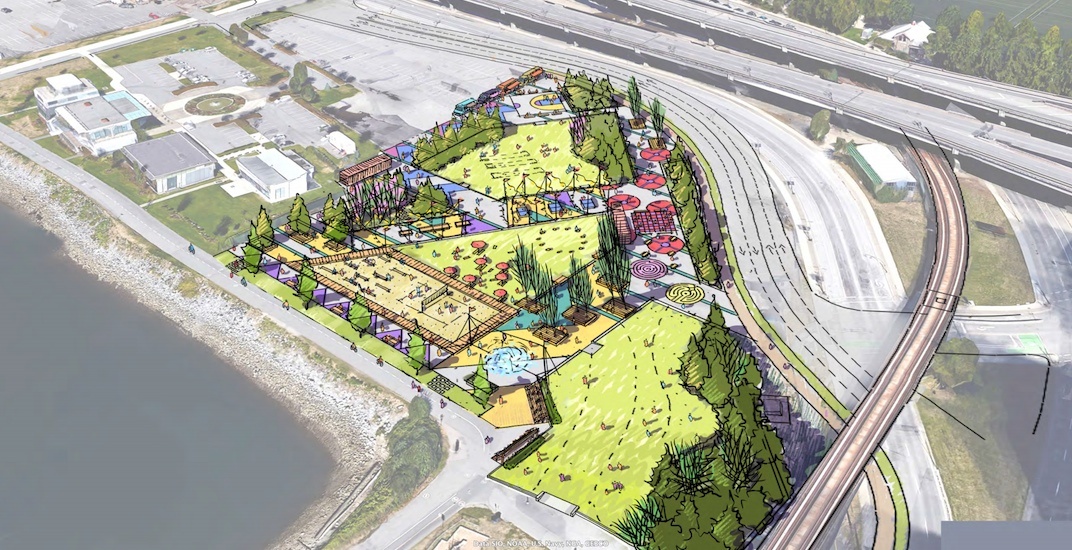