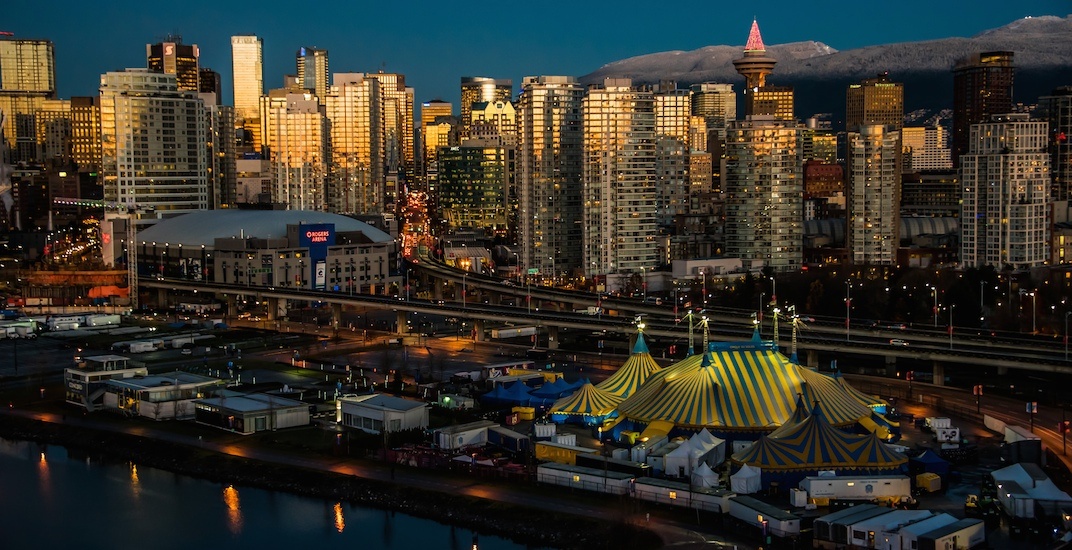 Could Cirque du Soleil’s iconic, touring Big Top be relocated to another municipality like Surrey after 2018?

Special events and festivals, such as the circus performing troupe, that have depended on the vacant, undeveloped nine-acre Concord Pacific lands at Northeast False Creek over the years could be forced to move to far-flung, non-centralized locations with poor public transit access elsewhere in the region.

Later this year, a three-acre parcel located on the easternmost portion of the site – used by events like Cirque du Soleil – will be converted into a temporary park with a predominantly grassy area as part of the site’s eventual conversion into a permanent expansion of Creekside Park.

This means Concord Pacific’s ability to rent its land to events and festivals will end this year.

‘A great concern from event organizers’

There will also be a small, open grassy area for leisure uses and community events and festivals, but such spaces are not suitable for certain types of events, including Cirque du Soleil, that require large, flat paved surfaces. 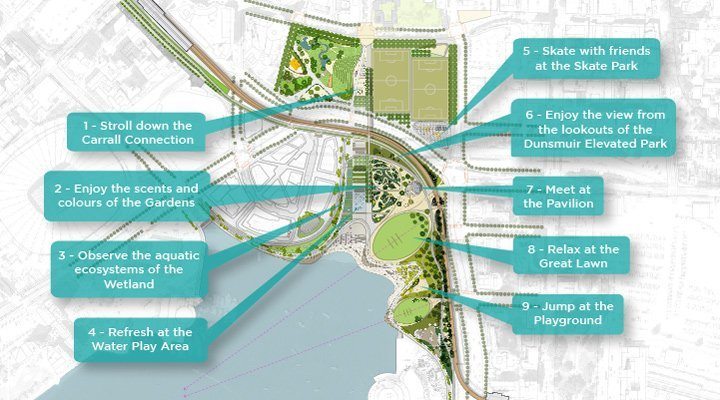 Preliminary design for the park space at Northeast False Creek. (City of Vancouver)

Grassy areas do not offer the flexibility that certain events need, and the cost to remediate grassy areas after a multi-week (or even multi-month) special event, such as Live City at David Lam Park during the 2010 Olympics, would make many commercial and non-profit events financially unfeasible.

He says “City staff are taking this very seriously” and that there will likely be more iterations of the permanent future park design, adding that the Vancouver Park Board on Monday voted to request City Council to delay its decision on Northeast False Creek over some issues on the overall park design.

“Everything will have to go through a public hearing process, and there will be many iterations of this plan, so hopefully we can satisfy those concerns,” he said.

Cirque du Soleil was unable to comment on its future location for its Big Top shows in the Metro Vancouver market.

When Daily Hive reached out to City of Vancouver staff for comment on the matter, the following statement was received: “The City will work with organizers to find appropriate locations in the future should their original sites no longer be available.”

The large City-owned gravel property between the Cambie Street Bridge and the Olympic Village at Southeast False Creek will also be eventually redeveloped. This site is used by Cavalia’s touring productions, and during the 2016 Christmas season it was the one-time location of Enchant Light Maze. 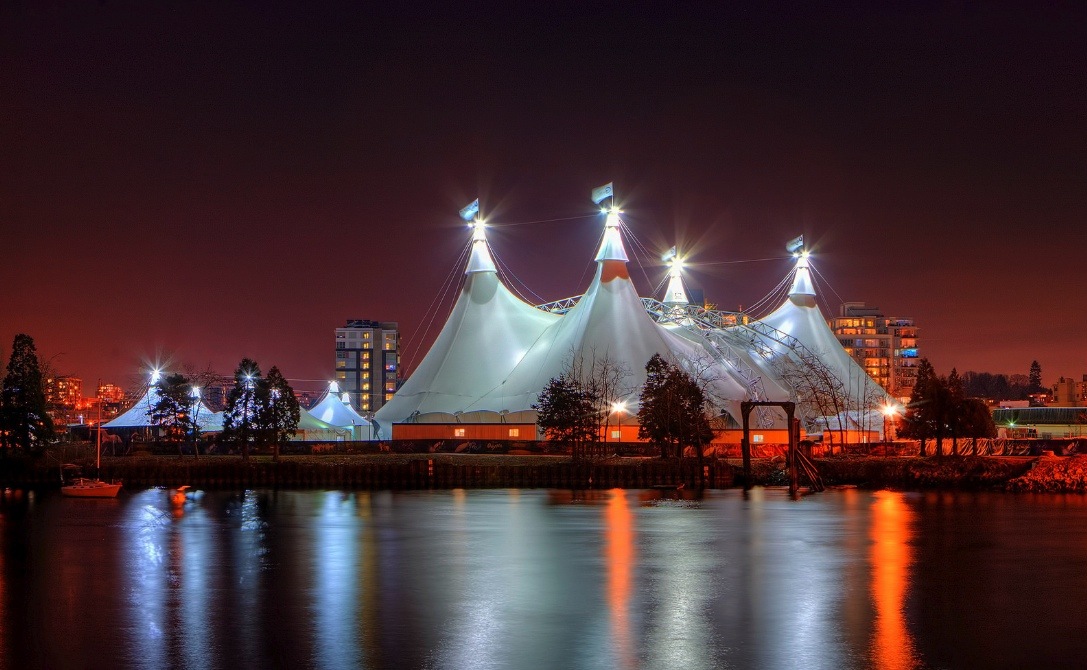 The giant Cavalia tent at the gravel site at Southeast False Creek between the Olympic Village and Cambie Street Bridge. (Clayton Perry Photography)

Hastings Park, the home of the PNE, lost much of its flexible event-hosting capabilities in the late 1990s when most of the fair buildings and open hard surfaces were replaced with landscaped green spaces and a lake. And more landscaping is planned in the years to come as part of another wave of park greening.

‘Larwill Park’, which in reality is a city-block sized paved parking lot, is slated to be redeveloped as the new Vancouver Art Gallery and two office towers.

This site has held major festivals such as Live City Downtown during the Olympics, the 2015 FIFA Women’s World Cup Fan Festival, and most recently The Drum Is Calling Festival as part of the City of Vancouver’s Canada 150+ programming. 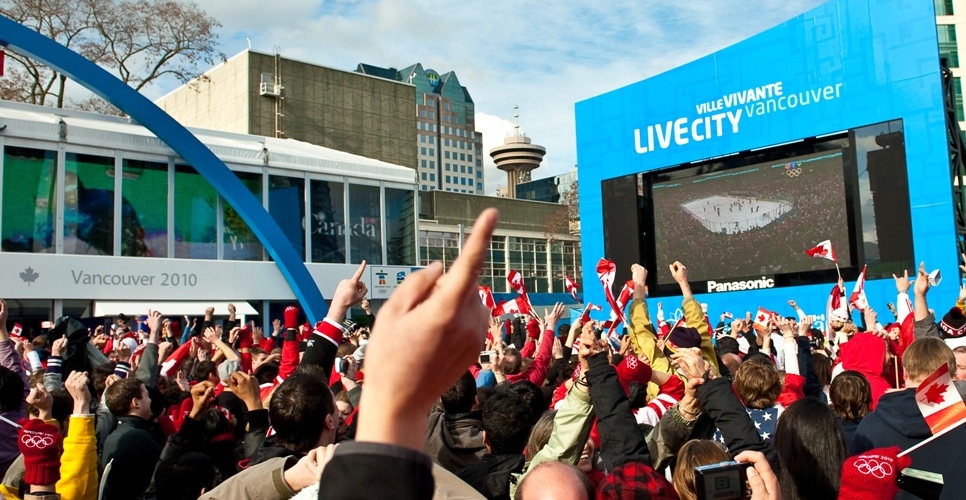 The Live City festival zone at Larwill Park in downtown Vancouver during the 2010 Olympics. (City of Vancouver)

Late last year, the Vancouver Park Board approved the temporary use of a small parking lot atop Queen Elizabeth Park, near the entrance into the golf course, for a special gourmet cirque cabaret event running from November 2018 to March 2019. But its footprint – tent and back-of-house facilities – will occupy just 20,000 sq. ft. of area, a tiny fraction of what a large production like Cirque du Soleil requires.

And if grassy areas at public parks are to be considered for special events over extended periods, such intrusions often ignite the angst of local residents over the lost leisure and recreational space.

As for the performance of a grassy area for a prolonged special event, it is far from superior to say the least.

Several years ago, Bard on the Beach sought to reduce its annual six-figure site maintenance and conversion costs of using Vanier Park’s grassy area by proposing to lay down permanent gravel or even paving. The site turns into a mud pit after each production season, and the re-seeding during the non-growing fall season has proven to be ineffective. 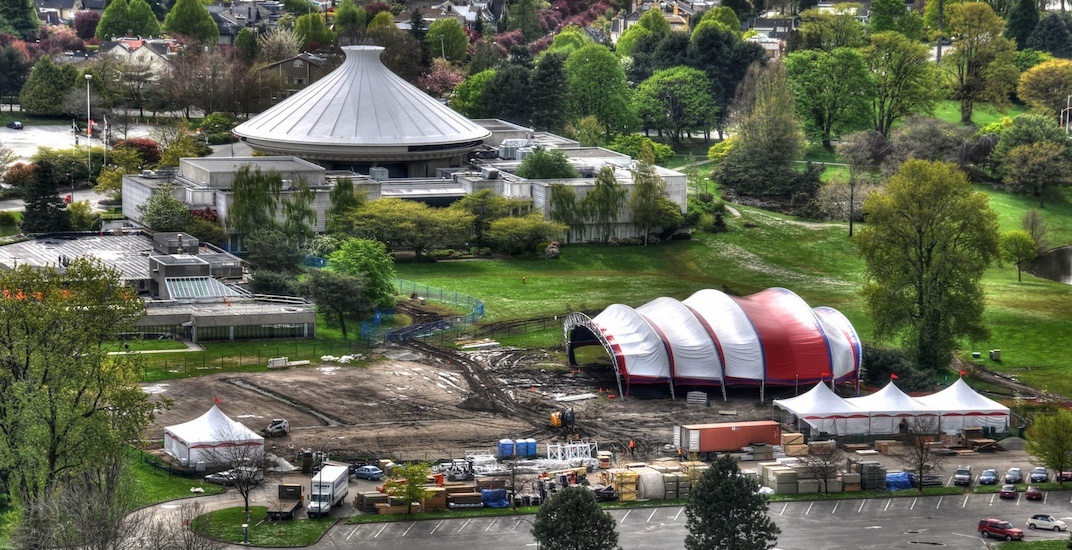 Bard on the Beach at Vanier Park in Kitsilano. (Doug Farmer / Flickr)

It all started with losing the Indy

Of course, this is not the first time a major event has been affected by development in the False Creek area.

The Molson Indy, which attracted over 100,000 spectators every summer, was forced to relocate to Edmonton after the 2004 race when construction on the Olympic Village began on the south end of the race course. 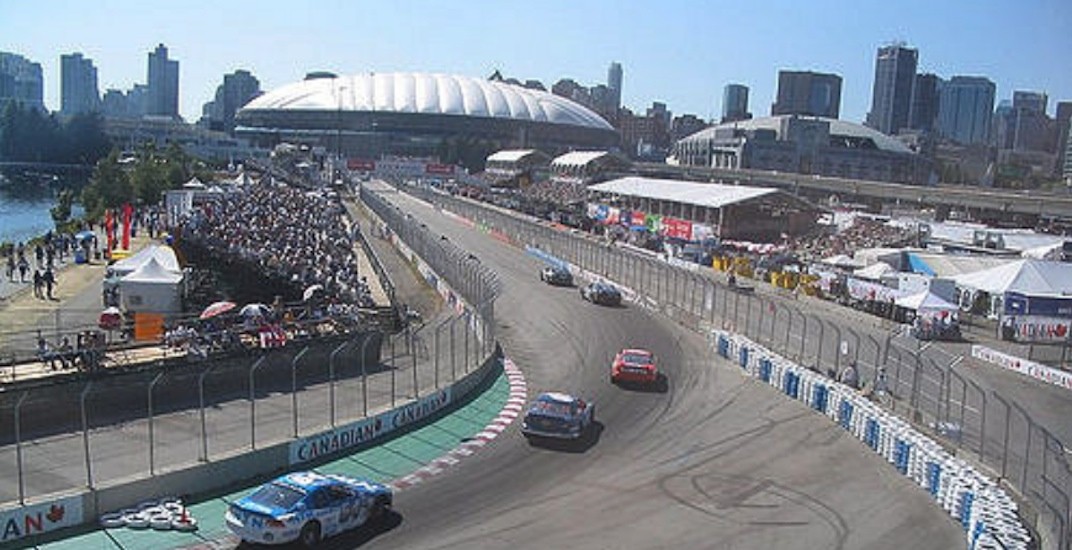 As well, most of the Indy’s grandstands as well as the start/finish line were located on Concord Pacific’s lands.

During the Olympics, this same site was used as exhibition space consisting of elaborate showcase pavilions by Molson and the provincial governments of Manitoba, Ontario, and Quebec.

The pavilions at the Concord Pacific lands during the 2010 Olympic Winter Games.
(Jan Zeschky / Flickr)

With the redevelopment of Northeast False Creek, downtown Vancouver will likely lose one of its last remaining capabilities to host certain special, large events that greatly contribute to the vibrancy and diversity of the city centre – a capability that most downtown areas of major cities have and fought to retain.

What will downtown Vancouver have moving forward?