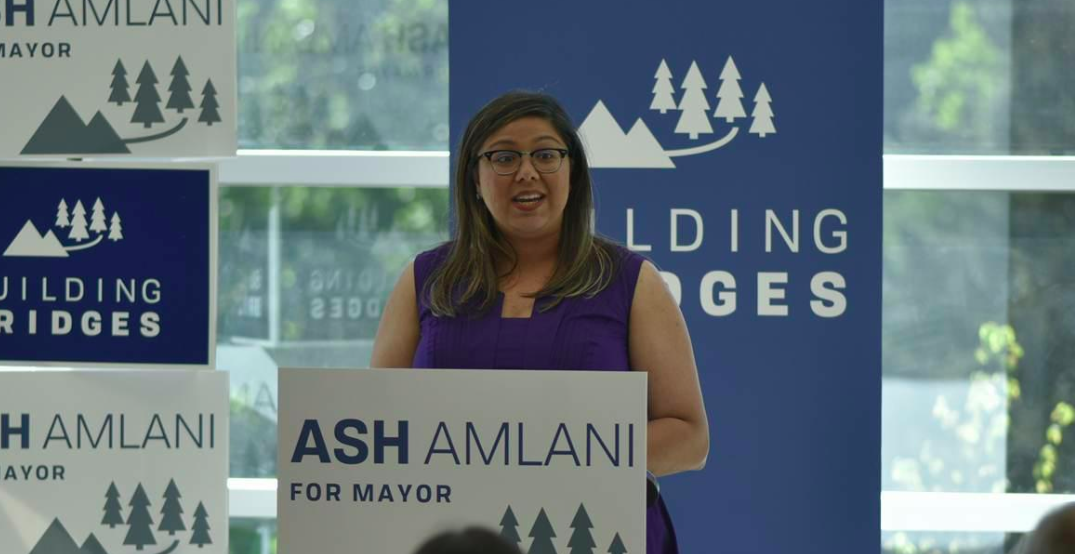 Ash Amlani is running for mayor of the District of North Vancouver. (Ash Amlani)

Saying a “new style of leadership” is needed in the community, 32-year-old Ash Amlani announced she is running for the mayor’s seat in the District of North Vancouver.

Amlani, who made her announcement at the Delbrook Community Centre, is part of a newly-formed municipal party in the district, known as the Building Bridges Electors Society (BBES).

The BBES came about largely due to the fact that over the last four years, “there have been many cases of district council splitting 3-3 on important issues, which gives mixed signals to district staff and leads to inefficiencies in long-term planning,” she explained. “This fall, we are providing voters with the choice to elect a council that brings diverse perspectives while working towards a common, united vision.”

Amlani told Daily Hive the aim of the BBES is to create “a thriving, healthy and prosperous community” by listening to all residents and taking action on the issues that are important to them.

“We are a stronger society when people of all ages and backgrounds are heard and represented equally,” she said. “As mayor, I will bring a style of leadership that is inclusive and actively engaged.”

Amlani has held senior roles in the BC Centre for Disease Control (BCCDC), the Ministry of Fisheries and Oceans, and the Canadian Coast Guard.

During her time at the BCCDC, Amlani served as Chair for the Take Home Naloxone Advisory Board, spearheading the expansion an initiative which led to a significant reduction in opioid overdose deaths.

Currently, she is a member of the District Committee on Community Services and is an active volunteer in the Aga Khan Development Network.

Amlani is the first Ismaili, Muslim woman to run for mayor in the district and she encouraged all residents to get involved.

“Building Bridges will be putting forward a full slate of candidates,” she said. “If you want to make a difference in our community, we ask you to join us in building a strong team.”

She cited political deadlock as a reason for needing to elect a united council.

“Long-term planning can’t exist when half of council always votes one way and the other half always votes another way.”

Amlani said that between now and the election the BBES will be knocking on doors, holding public meetings, and taking into account all the concerns of residents throughout the community.

“We will come to you,” she said. “We want to hear your ideas, we want to know what needs fixing and how you’d like to see us fix it.”

During her announcement, Amlani, who has lived in the community for 16 years, said the two biggest issues facing the District revolve around transportation and housing, adding that people are “tired” of waiting for action.

“In the last four years, it has become much harder for people to move around the North Shore, and it is much more difficult to find an adequate place to live in the District of North Vancouver.

“Traffic congestion in North Vancouver has gotten considerably worse and many residents find themselves unable to purchase a home or find a rental property in the current market.

Comprehensive, “evidence-based solutions” are needed to alleviate the district’s woes on these issues, she said, offering some further detail on what these solutions might look like.

When it comes to housing, she said the “inadequate diversity” in the types of housing in the district has made it harder for both renters and owners to find a place to live.

A possible solution “would be to encourage the development of medium density properties such as duplexes, multiplexes, townhomes or low rise apartment buildings.”

On the transportation front, “we need to alleviate traffic congestion.”

Steps towards this could include making alternate forms transportation a “viable option” for commuters and improving our road infrastructure.

“In the long run, we need to explore region-wide rapid transit options,” she added.

When it comes to decreasing rush-hour gridlock, Amlani said one potential option “would be to eliminate street parking on major corridors during peak hours.”

Another option would be to “advocate for increased frequency along denser corridors to encourage more people to commute by bus.”

The municipal election will be held on October 20th.