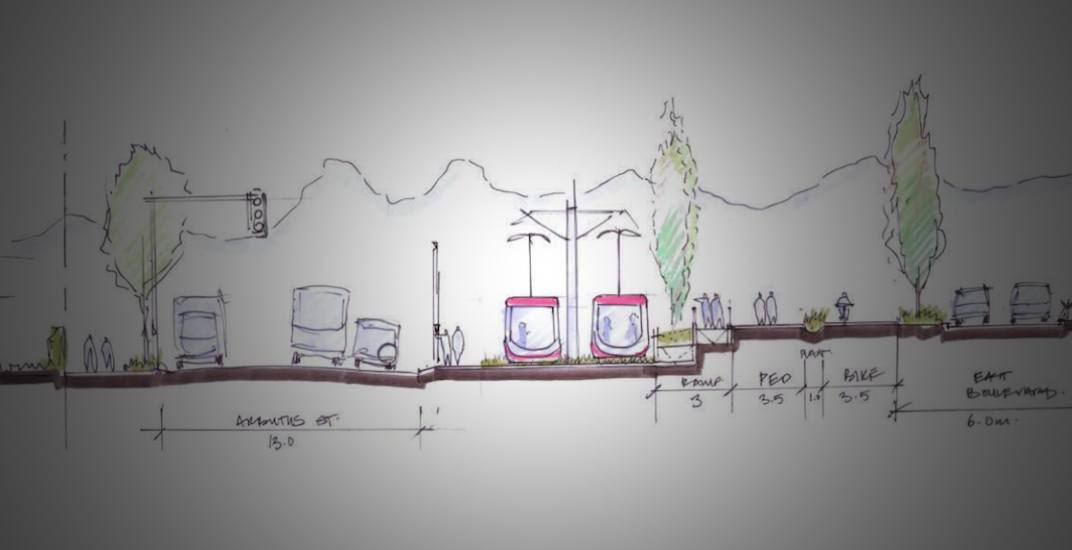 The streetcar running along the Arbutus Corridor east of Quilchena Park at West 33rd Avenue. (City of Vancouver)

The public now has a first glimpse of what the Arbutus Greenway and its future streetcar line could look like.

Over the weekend, the City of Vancouver held a three-day long ‘Design Jam’ with 100 participants on the future of the Arbutus Corridor.

As part of this public consultation process, the municipal government revealed some of its identified route options for the streetcar along the planned greenway, and how the rail rapid transit service will share the space with pedestrian and cycling paths as well as other uses such as plazas, community gardens, and green spaces.

The existing nine-km long former railway Corridor starts at the corner of Fir Street and West 6th Avenue, just west of the south end of the Granville Street Bridge, before winding south to parallel Arbutus Street. It ends at the Fraser River, just west of TransLink’s bus depot near the foot of the Arthur Laing Bridge.

Preliminary conceptual designs show that the municipal government’s non-finalized, preferred route for the streetcar segment between West 8th Avenue and West 16th Avenue will take the northbound direction tracks off the Greenway and onto the northbound curb lane of Arbutus Street. The southbound direction will continue to run on the Corridor, next to the pedestrian and cycling paths.

The northbound track returns to the Corridor south of West 16th Avenue. 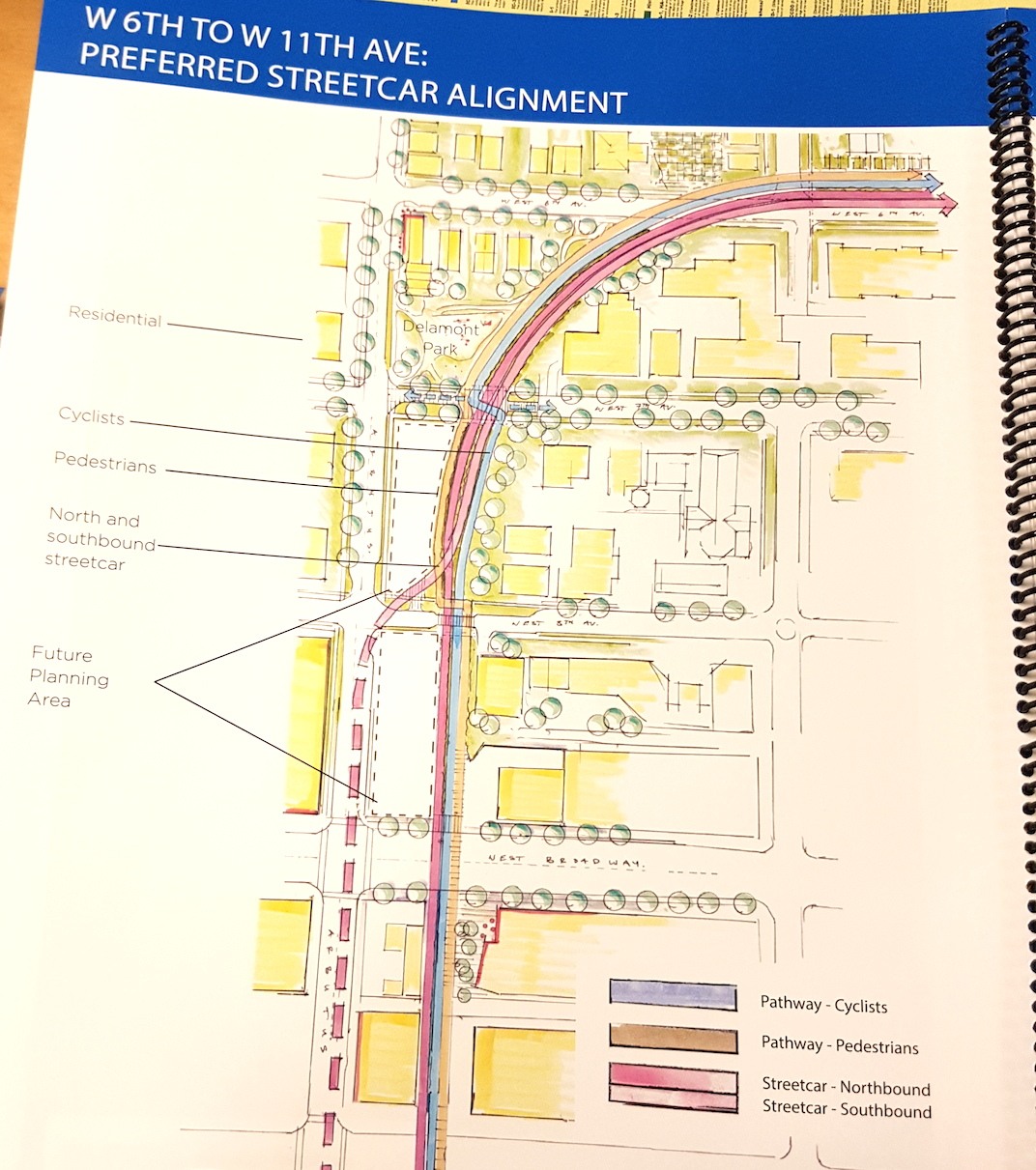 A City of Vancouver planning document showing the preferred streetcar route at the area where the Arbutus Corridor intersects with West Broadway. (Daily Hive)

While the City is still exploring options of keeping the tracks on the Corridor over this eight-block stretch, it says this area is challenging due to its narrower width.

The entire streetcar route has two-tracks for bi-directional service – there is no single tracking to ensure the transit service has the desired capacity, frequency, and reliability required.

“The most challenging part is where the Corridor is narrow. We’re trying to achieve a lot in a limited amount of space, so just keeping the transportation functions – each of them has a certain width requirement,” Lon LaClaire, the City of Vancouver’s Director of Transportation, told media during a press conference.

“We very much want to bring that delightful piece in the areas where it’s tight. There is less room for street trees, gardens, and public realm, and that’s where it’s challenging.”

He added that the Arbutus Greenway takes inspiration from the seawall experience and is an opportunity to create community gathering spaces while also delivering a key transportation purpose.

At least 14 streetcar station locations – largely at major east-west arterial streets – have been identified at this early stage, including:

The stations are spaced between 400 and 800 metres apart, paralleling much of the existing No. 16 trolley route that runs on Arbutus Street.

The streetcar is intended to replace the street’s trolley service, and it will be part of a future streetcar network with routes running along the existing railway right-of-way in South False Creek from the Arbutus Corridor’s eastern end near Granville Island to Quebec Street – replicating much of the temporary streetcar service during the 2010 Olympics.

From the Olympic Village, the route is envisioned to run northwards along Quebec Street and past Science World, with one line traveling along Pacific Boulevard towards Yaletown in North False Creek and another line through the streets of Chinatown, Gastown, and Coal Harbour to Stanley Park.

As for the Arbutus Corridor’s southern end, the streetcar could potentially continue eastward, paralleling Southwest Marine Drive, to connect with the Canada Line’s Marine Drive Station. 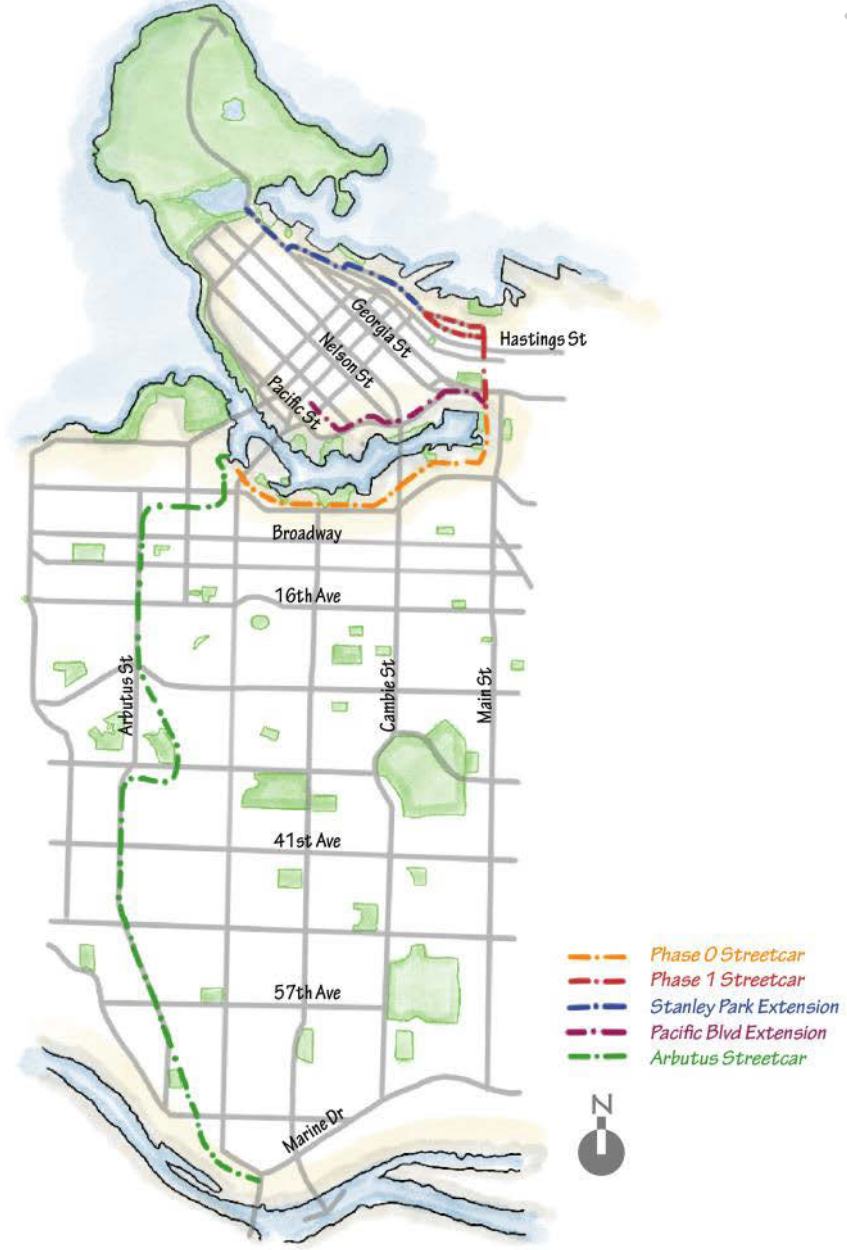 The Arbutus Corridor streetcar line will be a part of a future downtown Vancouver streetcar network that will have lines along South False Creek, North False Creek, and between Chinatown, Gastown, Coal Harbour – ending at Stanley Park. (City of Vancouver)

At the moment, streetcar planning is only focused on the Arubuts Corridor.

Staff are aiming to create a preferred design for the Corridor in spring 2018, and this design will undergo another round of public consultation before a draft master plan is sent to Vancouver City Council for consideration in the summer. Ideas from the recent public consultation process will be considered for incorporation into the detailed design.

When it comes to actual implementation, LaClaire said the Corridor will likely be built in phases, and this will encompass the pedestrian and cycling paths, pubic spaces, and setting aside space for the future streetcar tracks and stations, which is dependent on further funding as a TransLink-supported project.

The Corridor’s phases will be prioritized based on the funding approved as part of the City’s next capital plan, which will be determined by voters as part of the civic election ballot in October 2018.

No budget has been determined for the construction of the permanent design of the Arbutus Greenway, although when City officials announced in 2016 they had purchased the Arbutus Corridor from Canadian Pacific they had an early ballpark figure of between $25 million and $30 million for design implementation.

There is also no estimate for the cost of the streetcar infrastructure, but it will likely be significantly lower than Surrey’s light rail transit project, which has roughly the same length at a cost of at least $1 billion. It will be less expensive as the streetcar will largely run on a former railway right-of-way with few intersections. 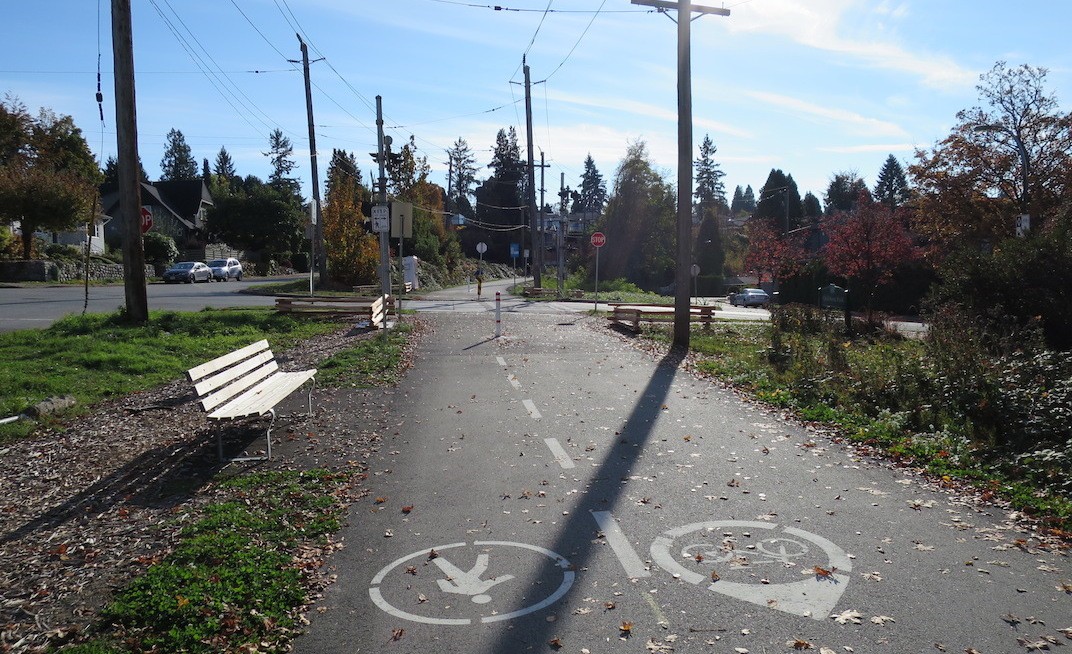 A temporary paved greenway with pedestrian and cycling paths is already in place and actively used during fair weather conditions. Traffic signal-controlled crossings for pedestrians and cyclists are also being installed at West Broadway, West 12th Avenue, and Southwest Marine Drive.

Other interim additions elsewhere along the Greenway include the installation of lighting between 33rd Avenue and 37th Avenue, bollards and split-rail wooden fencing at intersections to prevent vehicles from accessing the path, and flashing crossing beacons at 33rd Avenue.

“It’s quite possible that some sections of the greenway with minor improvements can work fine for years to come, and in other areas there is a big opportunity to make a good investment and deliver what this community is expecting,” said LaCalire.

Here are some of the City’s preliminary conceptual route and design concepts for the Arbutus Greenway’s streetcar tracks, pedestrian and cycling paths, and public spaces: 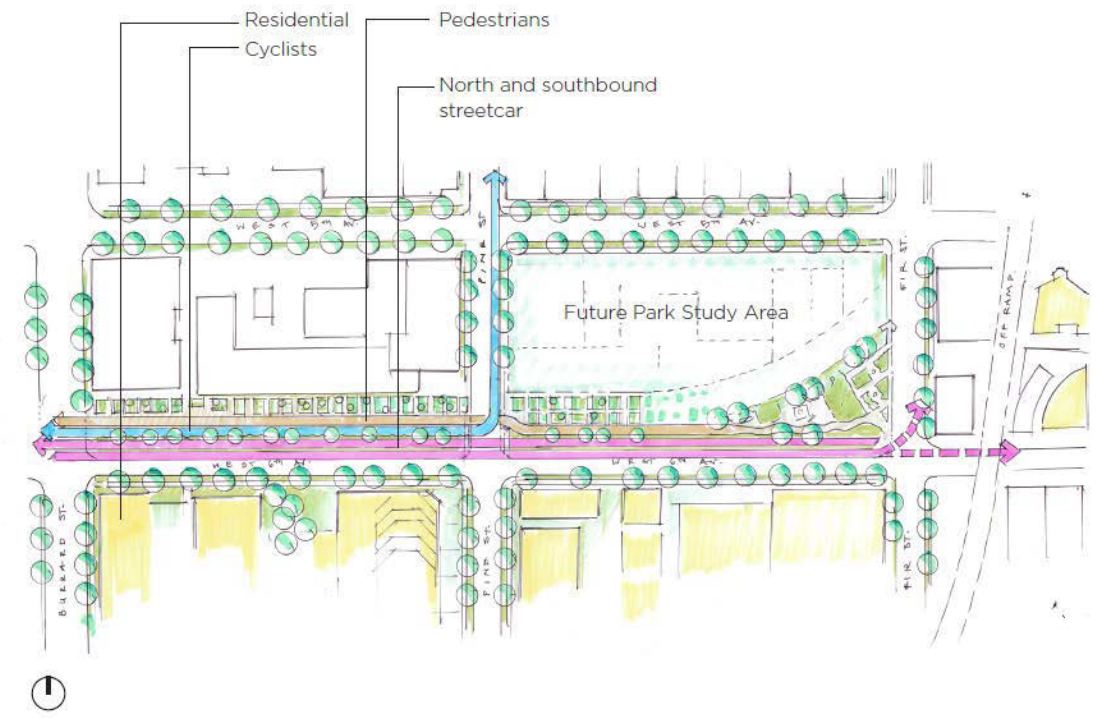 The streetcar route along West 6th Avenue between Burrard Street and Fir Street. (City of Vancouver)

The streetcar route along West 6th Avenue between Burrard Street and Fir Street. (City of Vancouver) 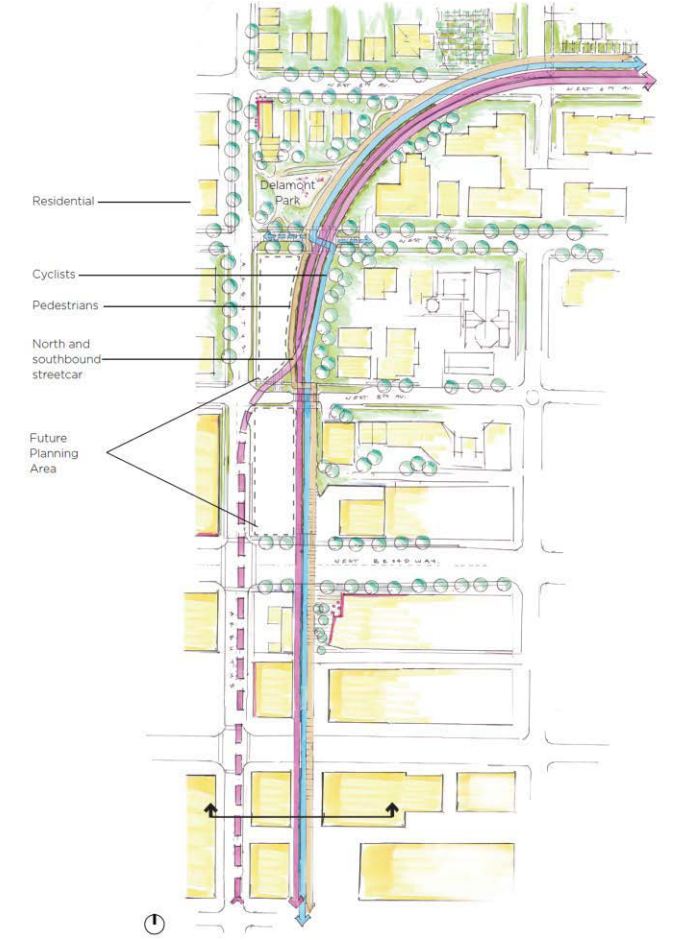 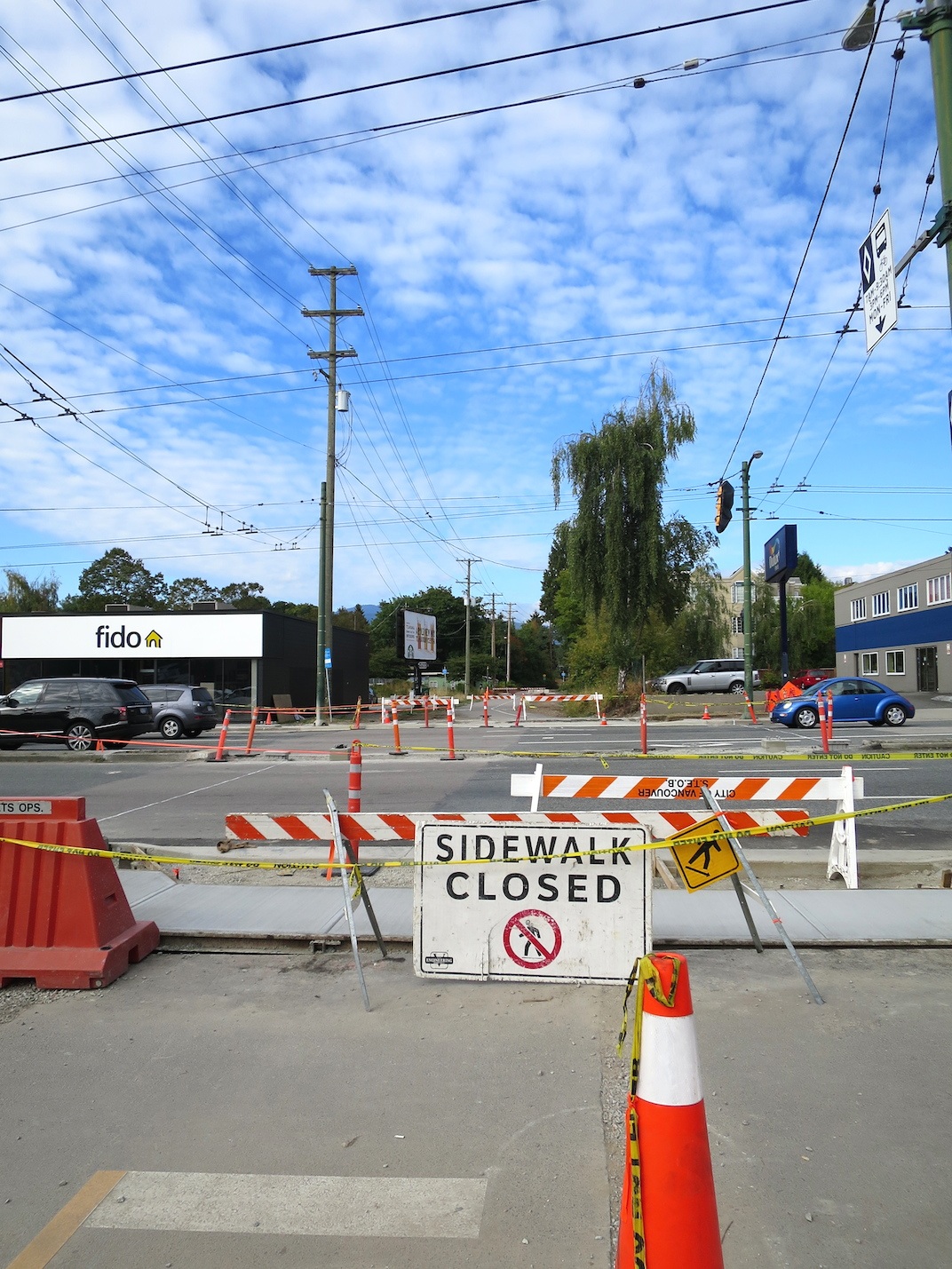 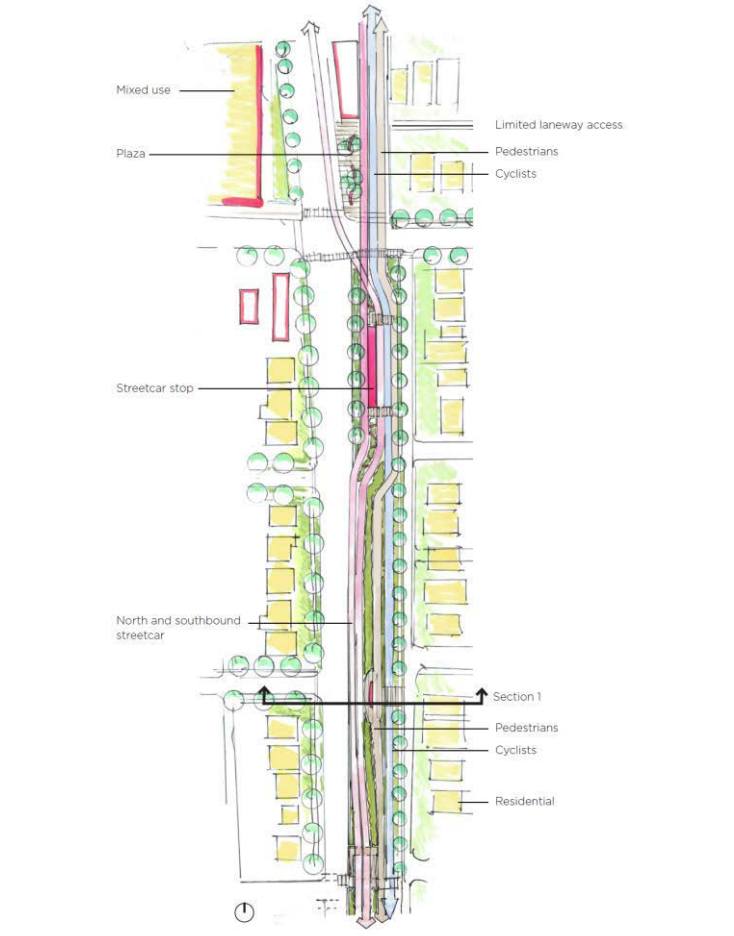 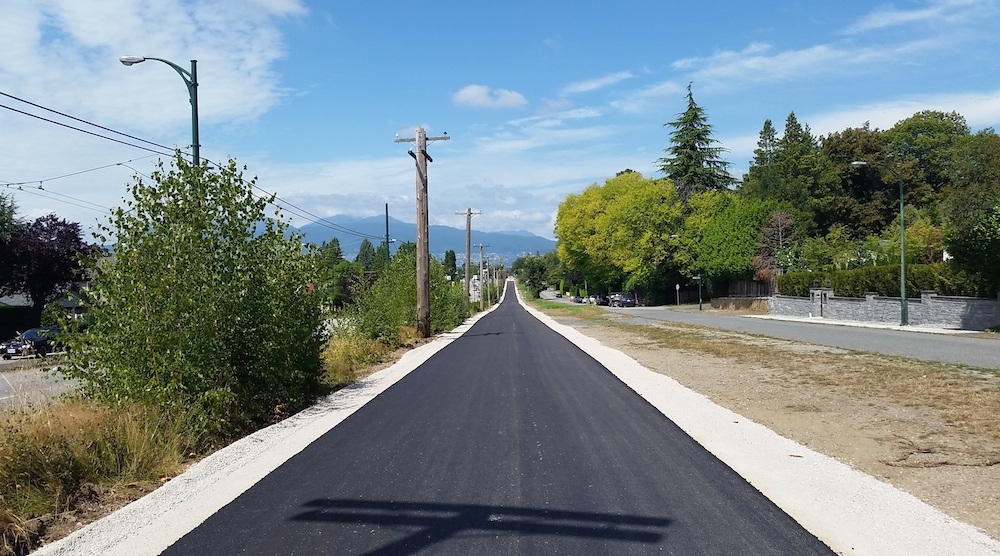 West 33rd Avenue and the ‘S-Curve’ 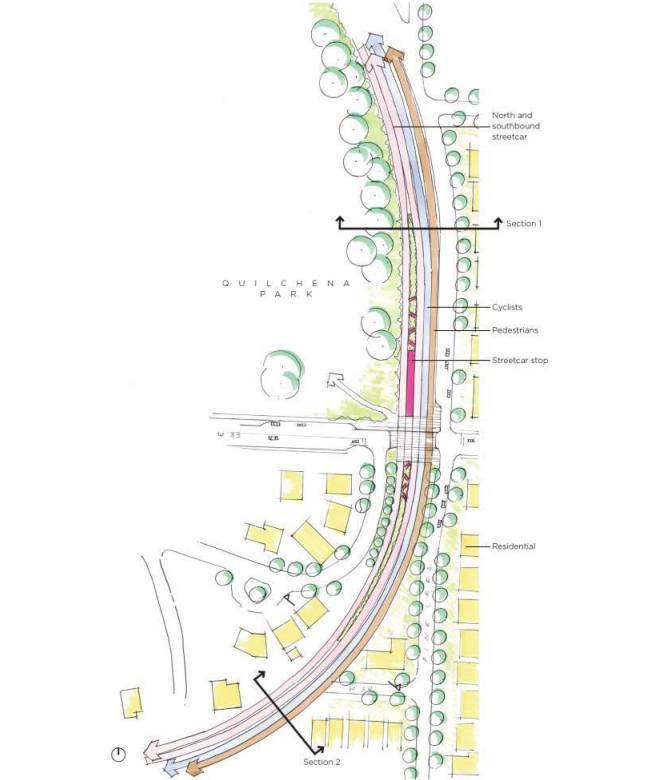 The streetcar running along the Arbutus Corridor east of Quilchena Park at West 33rd Avenue. This is also the ‘S-Curve’. (City of Vancouver)

The streetcar running along the Arbutus Corridor east of Quilchena Park at West 33rd Avenue. (City of Vancouver) 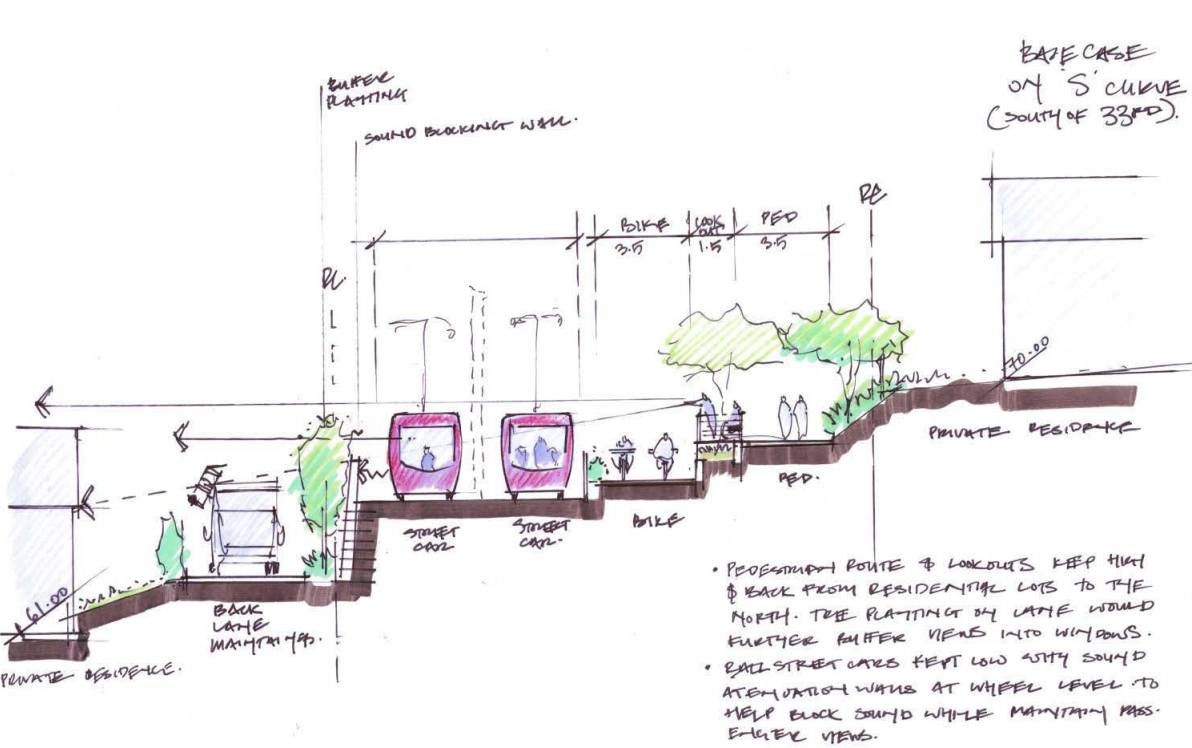 The streetcar route along the Arbutus Corridor ‘S-Curve’ between West 33rd Avenue and West 37th Avenue. (City of Vancouver) 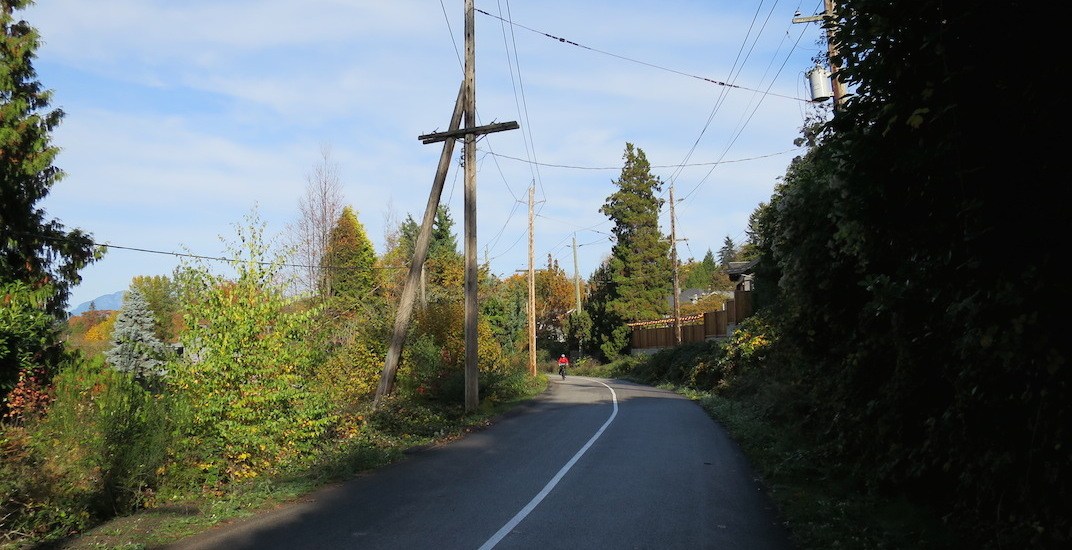 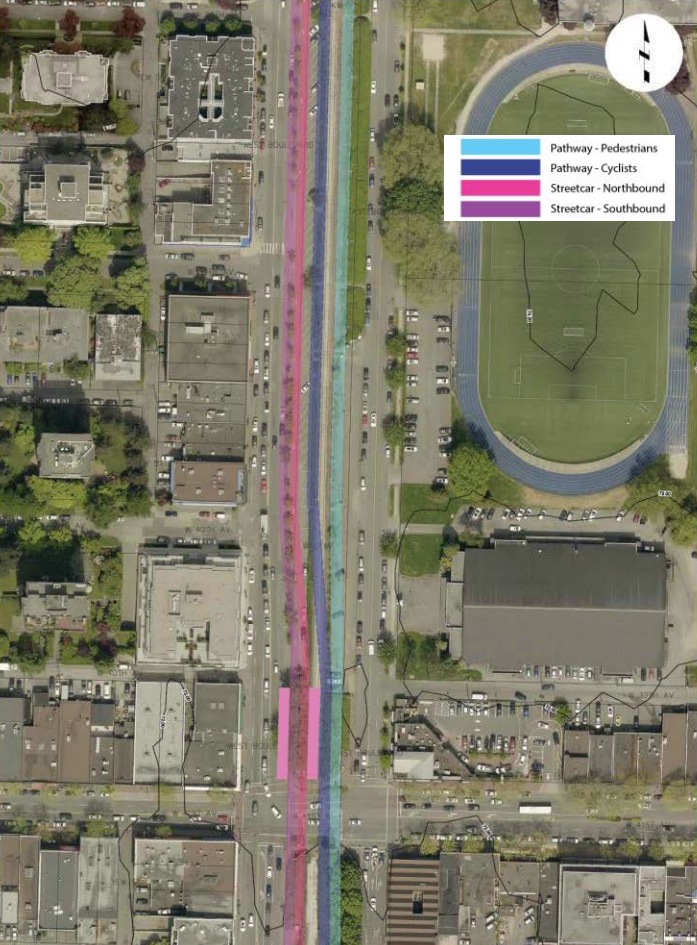 The streetcar route running through the Kerrisdale neighbourhood at West 41st Avenue. (City of Vancouver) 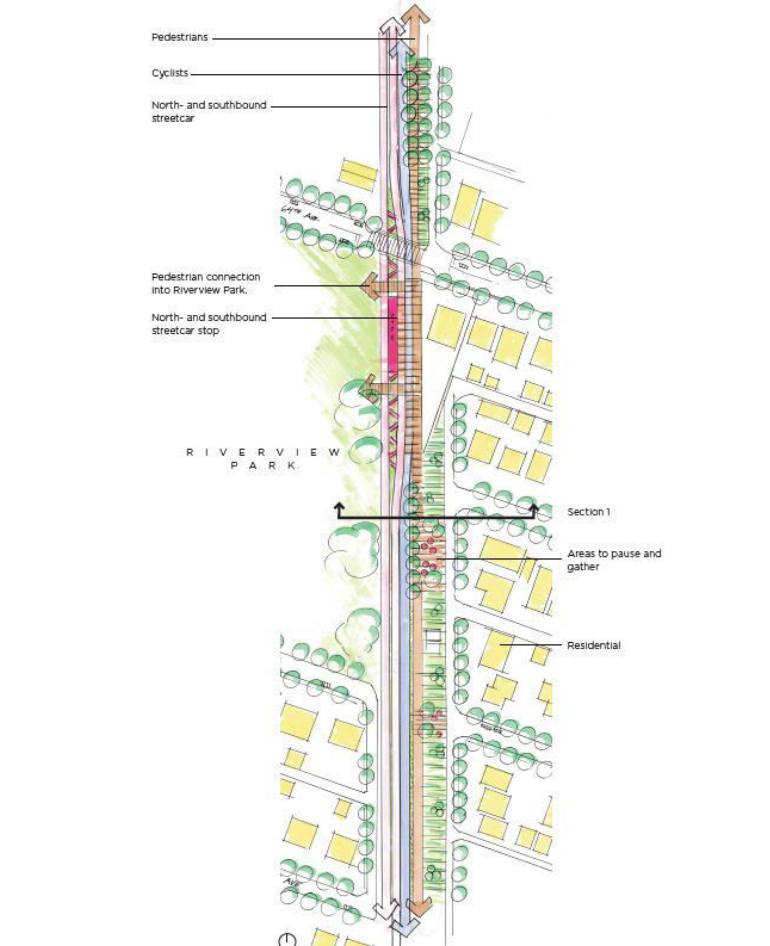 The streetcar route running next to Riverview Park at West 64th Avenue. (City of Vancouver)

The streetcar route running next to Riverview Park at West 64th Avenue. (City of Vancouver) 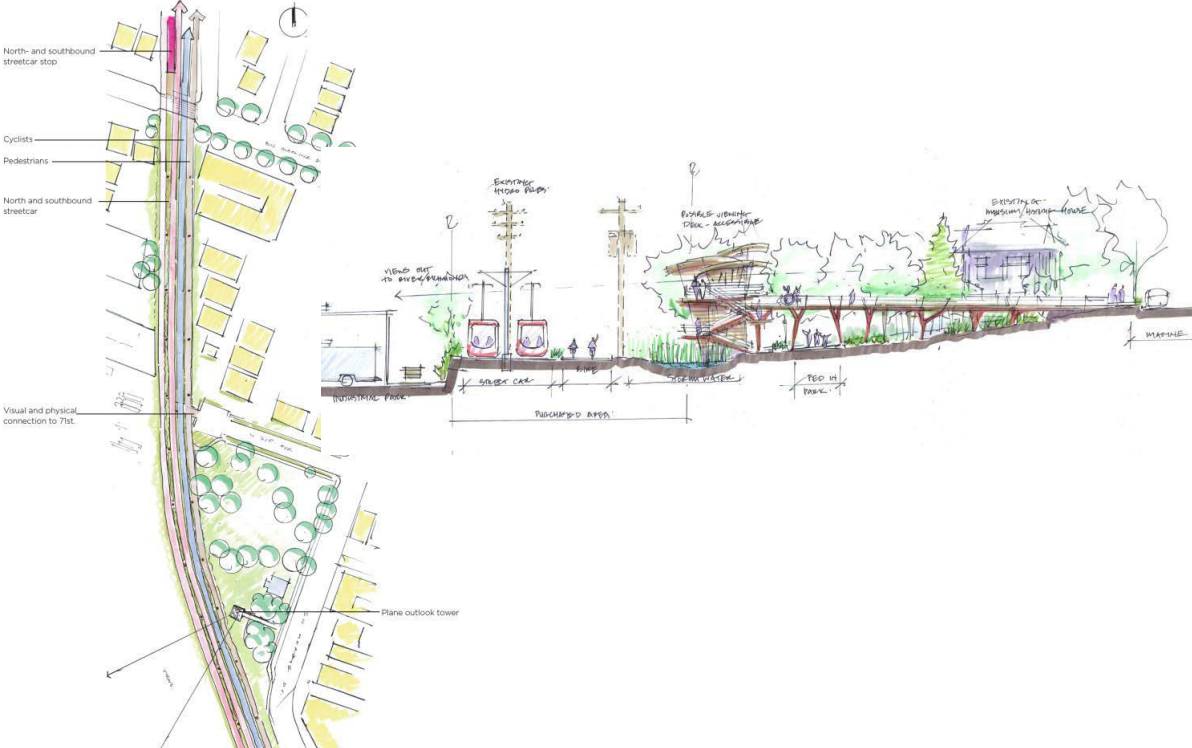 The streetcar route next to William Mackie Park and Southwest Marine Drive. (City of Vancouver)