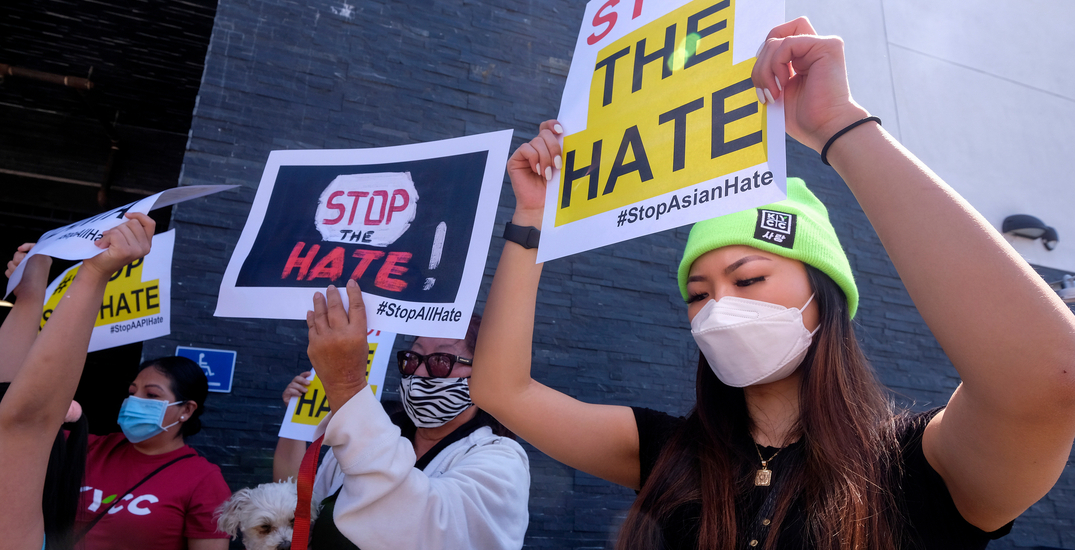 People hold signs to protest hate crimes committed against Asian-American and Pacific Islander communities ahead of a car caravan in Koreatown on March 19, 2021 in Los Angeles / Shutterstock

Written for Daily Hive by Teresa Woo-Paw, Board Chair of the Canadian Race Relations Foundation, dedicated to the elimination of racism and all forms of racial discrimination in Canadian society.

The mass killing of Asian women in Atlanta last week is a wake-up call for which Canadian society has pushed the snooze button for far too long.

We know that tensions are high due to the stress faced by all Canadians concerning the ever-present pandemic. Still, some Canadians have used this event to inflict racism, xenophobia, and violence against Canadians of colour.

This cannot be tolerated and must be confronted at every turn — by law enforcement and civilians alike.

We all know that racism should not have a place in our country– we hear and say this all the time. But the unfortunate reality is that it exists more often than we care to acknowledge—in the present and historically. 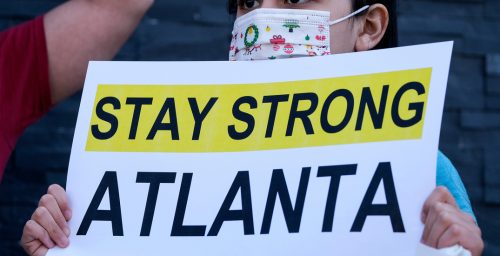 Melanie Bolanos, 9, holds a sign to protest hate crimes committed against Asian-American and Pacific Islander communities ahead of a car caravan in Koreatown on March 19, 2021, in Los Angeles / Shutterstock

In the late 1800s, 9,000 Chinese migrant workers completed the Canadian railway—modernizing Canadian cross-country transportation.  While the Government of Canada was grateful for their labour, they were not interested in more Chinese people entering Canadian soil to live.

The government actively worked to block the Chinese from immigrating to Canada. To add insult to injury, Chinese-born Canadians were forced to register for identity cards, unlike their non-racialized counterparts.

These racially discriminatory rules became known as the Chinese Immigration Act. Local governments and business also began disinformation campaigns against the Chinese, similar to those we see in modern-day social media platforms, to discourage Canadians from supporting Chinese businesses. This was all a foreshadowing of what would come next.

In September 1907, thousands gathered at Vancouver City Hall to protest Asian immigration to Canada. Of the 15,000 men, women, and children who attended the rally, 7,000 took the streets of Vancouver’s Chinatown.

They proceeded to vandalize and destroy Asian businesses and homes.  Amid the Second World War, the Canadian government dispossessed and detained 90 percent of the Japanese-Canadian population in retaliation for the Japanese war offensive.

That same year, the provincial government in British Columbia barred South Asian immigrants the right to vote in municipal elections and federal elections. These are shameful periods in our history that we should never repeat that contain several lessons we should have learned from. 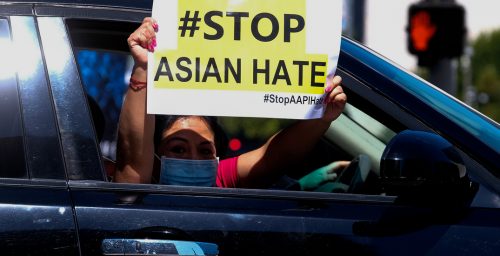 A woman shows a sign in her vehicle during a car caravan in Koreatown to protest hate crimes committed against Asian-American and Pacific Islander communities on March 19, 2021 in Los Angeles / Shutterstock

But in an age where good and bad propaganda can be spread across the country in a nanosecond, have we truly learned our lesson?

In the modern age of social media, we know that hateful and racist rhetoric that is spread online and in-person has exceedingly dangerous consequences for racialized Canadians such as the Asian-Canadians who have faced physical and verbal abuse since the emergence of COVID-19— but for the nation entire.

While social media has many positive benefits, it also gives fringe voices a massive platform to spread racist vitriol widely and anonymously with impunity. No one should not stand for this.

Using hate speech and violent attacks to target particular groups of people based on their ethnicity or religion puts Canadian society on a perilous trajectory in direct conflict with the rights and freedoms that every resident of this country is promised.

Every Canadian has a responsibility to promote a peaceful and accepting society regardless of one’s faith, colour of skin, or country of origin. Silence or deliberate disregard of any disruption to our rights and freedoms is just as egregious as the direct act of hate itself.

The Canadian Race Relations Foundation and YWCA Canada are doing our part to raise awareness about the effects of racist rhetoric online and in-person by launching #BlockHate where we will highlight the plight of those who have faced online hate speech.

However, we can all do more:

If we commit to these efforts together, we just might be able to forge the peace and harmony that we were promised and that we all deserve.

To learn more about the CRRF/YWCA #BlockHate campaign, visit www.blockhate.ca