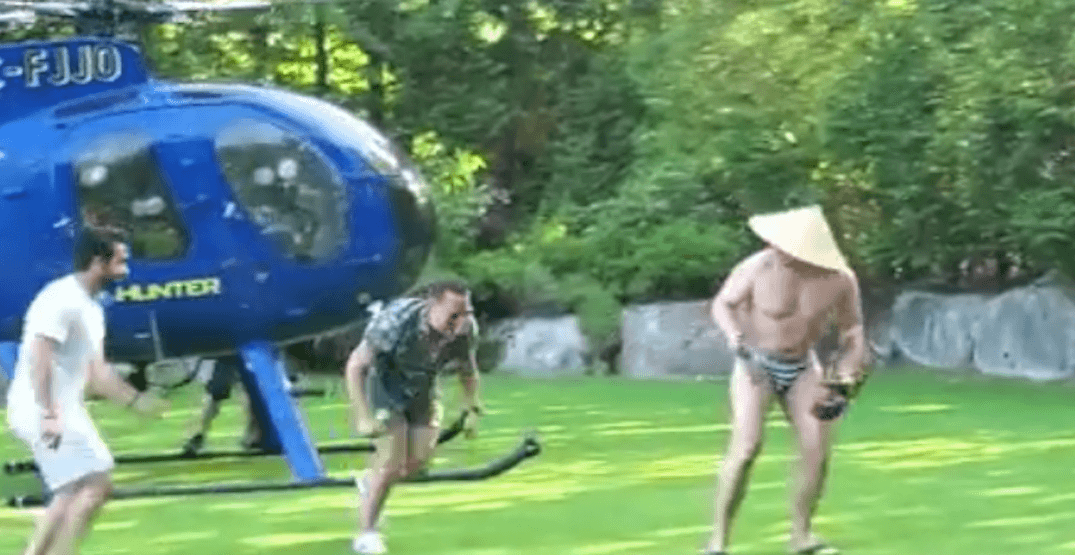 A massive house party in the normally quiet village of Anmore, near Coquitlam, featured 1,700 cans of booze, over 300 people, and three helicopters – among other things.

The event was hosted by Justin Plosz, who according to his Instagram, is the owner of Public Relations Canada.

“In the words of Jordan Belfort, ‘Nailed It,'” he writes.

He described the bash as a “networking event,” and on Tuesday, uploaded a video recap of the party to YouTube.

He also shared a video on his Facebook page of one of the helicopters landing on the property.

“We were informed that the Coquitlam RCMP responded to a noise complaint late afternoon on June 1st and we are following up with them to obtain further details,” he said. “We are also following up with Transport Canada to determine the regulations for landing helicopters in a residential areas.“

McEwen said he knows the home was being rented out “and that the renter, and party host, has now vacated the property.”

The mayor said that going forward, “the Village will be reviewing our bylaws and continuing to work with local authorities” to mitigate similar issues from happening again.

Asked about police attendance at the event, Coquitlam RCMP Cpl. Michael McLaughlin confirmed that police responded to a noise complaint in the 30 block of Birch Wynde.

“There was a large house party at the time, but no criminal offences were observed and a noise bylaw warning was issued,” he told Daily Hive.

Then, around 7:54 pm, “police re-attended the same address for an overdose.”

McLaughlin said the person who overdosed was treated at the scene “and refused further treatment.” No arrests made, and no tickets were issued.

McLaughlin said that when police are investigating a bylaw complaint, such as noise issues, “our powers to search are limited.”

For example, he said, ” we can’t go all around a private property looking for further offences or to count the exact number of people at the party.”

If police don’t observe any criminal offences, “we do not proceed with arrests or charges.”

As for the helicopters landing on the private property, or “allegations of nudity at a private event,” McLaughlin said these sorts of things are “are not generally criminal issues.”