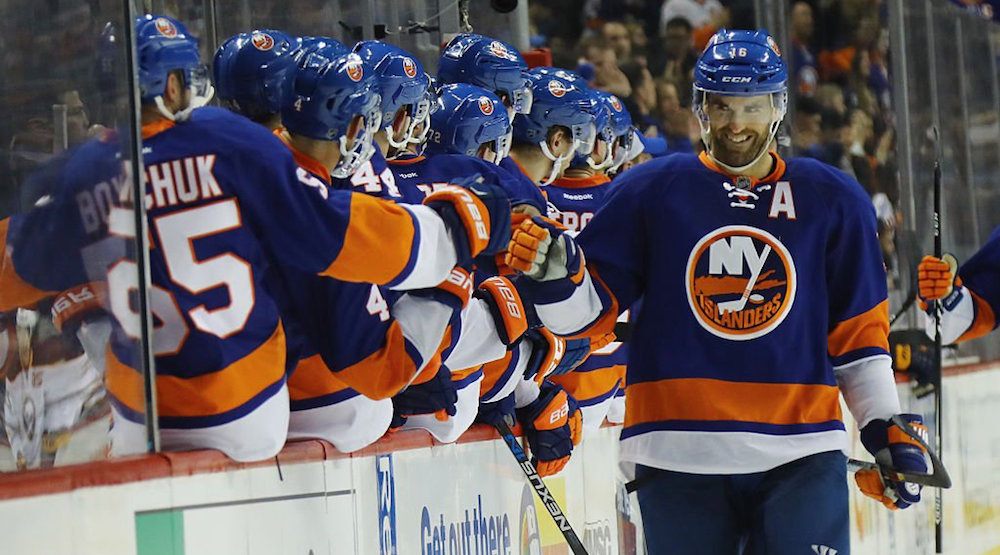 It was a less than ideal first season in Brooklyn for Andrew Ladd.

After spending 10 years split between two NHL franchises, the Maple Ridge native knew his place on his team and had a well defined role. He tested the waters in free agency last summer though, cashing in with a seven-year, $38.5 million contract with the New York Islanders.

Here’s where the less than ideal part comes in.

He started the season with no goals and just one assist in his first 12 games. To make matters worse, his team was underperforming too, beginning the season with a 4-6-2 record.

Daily Hive caught up with Ladd, who is in town for a charity initiative organized through the Ladd Foundation.

“It was a tough start, the transition I wouldn’t say was the easiest,” Ladd said in a phone conversation with Daily Hive. “Chicago and Winnipeg were two places I was extremely comfortable, with the coaches and the guys in those rooms.

“It took me a bit to get my feet under me, but towards the end of the year it really came around and I thoroughly enjoyed myself there. I’m looking forward to what our team can do there.”

The 31-year-old wasn’t the first player to struggle after signing a big contract, and he likely won’t be the last. Canucks fans know that all too well watching Loui Eriksson last season.

Ladd echoed what Eriksson has said, citing getting acclimatized with his family to a new city as being a bigger challenge than you might think.

Similar to Eriksson, who got his first goal (into the other team’s net) as a Canuck in his 14th game, it took Ladd 13 games to score.

Fans and media alike assume that the big contract carries big pressure, which leads to problems in production. Not so, says Ladd.

“New surroundings, new coach, new linemates (were the issue). Trying to figure out where you fit and earning the coach’s trust in different situations.

“Coming from a place where usually I was the first guy to pop into the coach’s head in a lot of different situations, you go to a new team where they have their go to guys and you have to work and gain the trust to get put in those spots and get comfortable with the new systems.”

Stuck in last place in the Eastern Conference, the Islanders fired their head coach, Jack Capuano, on January 17.

Things improved under new coach Doug Weight, both as a team and individually for Ladd. The Islanders finished off the season with one of the league’s best records, and Ladd scored 15 goals in his final 37 games.

Given that he has six more years left on his contract that carries no-movement/no-trade clauses, the former Coquitlam Express star isn’t likely to ever play for his hometown NHL team. He has an idea of what it would be like though, having spent considerable time in a hockey hotbed.

“I had the opportunity to play in a Canadian market for five years. I didn’t feel like the pressure was too overwhelming,” the two-time Stanley Cup winner said about playing in Winnipeg. “The tough part about being in those type of markets is when things aren’t going very well, it’s tough to get away from it.

“Everywhere you go, people know who you are. They know how the team’s doing, they want to talk about it. So whether you’re at the grocery store or grabbing a coffee, it’s really hard to get away from those tough times. As a hockey player, sometimes it’s that mental break that you need that allows you to get back on track. That’s the tough part.

“On the flip side, when things are good, they’re great. You’re the kings of the town and everybody treats you extremely well. And you can do no wrong.”

Ladd will do no wrong next week, as his foundation hosts its first charity initiative.

“We’re going to do a bunch of events that support various causes, mainly focused on youth and the environment,” Ladd said of his foundation.

Rick Hansen, will also be participating.

Sturgeon Fishing with an NHL Star will run July 18 to 21.

Ladd promises that the event will be an intimate one, with a chance to get to know everyone.

To reserve one of these limited spots, contact Kevin Estrada of Sturgeon Slayers: [email protected].