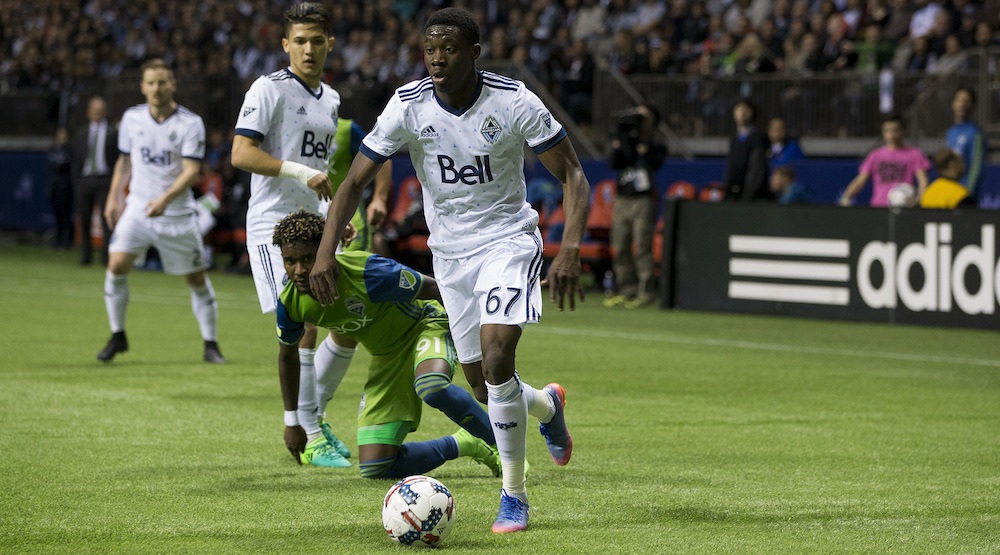 “When he gets the ball, you can almost feel the whole stadium on the edge of their seat, waiting for him to do something special.”

Those were the words of Whitecaps president Bob Lenarduzzi describing teenage midfielder Alphonso Davies, who he also confirmed that some of the world’s biggest clubs are keeping an eye on during an interview with TSN Radio on Tuesday.

Though careful in his response to a question about interest from teams overseas, Lenarduzzi did confirm that Manchester United and other clubs are interested in the 16-year-old phenom.

“We’ve had contact with those clubs that you are referring to. And others,” Lenarduzzi admitted to interviewers Don Taylor and Bob Marjanovich. “But there’s been nothing concrete. For us, you’d never stand in a kid’s way as far as that kind of opportunity goes.”

What Davies is doing on the pitch is nothing short of remarkable for a kid that won’t turn 17 until November. His abilities were on display once again against the Montreal Impact on Tuesday night, scoring a goal and setting up another to help Vancouver to a 2-1 win in the first leg of the Canadian Championship semi-final.

Here’s his touch to open the scoring:

ICYMI, @AlphonsoDavies slips it by Maxime Crépeau for the 1st goal of the night #slowmo pic.twitter.com/Kpau5TQaOB

And his quickness and creativity to set-up the second goal by Nicolas Mezquida:

“If he keeps doing what he’s doing, then they’re going to come calling,” Lenarduzzi added.

If Davies continues to improve, he’ll move on to bigger and better things. And that would be a good thing for the Canadian international. It can’t happen until his 18th birthday though, so we’ll get to see at least one more season of the Homegrown Player beyond this year.

Until then the challenge for the Whitecaps is to develop the teenager without putting too much pressure on him.

Head coach Carl Robinson was very measured in his post-match press conference after the win against Montreal. For good reason, he’s trying to protect the youngster.

“Good players are wanted by teams,” Robinson said regarding overseas interest in Davies. “He’s 16 years of age and he’s playing in the first team. I’m not trying to protect him for any other reason than I want the boy to develop.”

How Davies develops in the coming years will be one of the most interesting things to follow for fans and media alike. The Whitecaps are being smart to shield him from the spotlight, not allowing him to be interviewed by the media, and slotting him into their lineup carefully.

“When you build players up, unfortunately then there comes a time when you knock them down,” Robinson added, referring to the harsh reality of the media spotlight. “The young boy has to learn. I want to protect him, for his own good, for Canada’s good, for everyone’s good. And at the right time, something will happen, no doubt about it.”

Davies is fun to watch for Whitecaps supporters in the short-term, but the real payoff could come down the line, as a member of the Canadian National Team.

With Canada looking like a shoe-in to host matches during the 2026 FIFA World Cup, it’s hard for the mind not to wander. Davies will be 25 in 2026. He could be Canada’s best player by then. He could be part of a revitalization of the national program.

But Davies still has a lot of work to do to realize his great potential. He needs to put the work in, keep a level head on his shoulders, and continue to grow as a player.

Until then? Watch and enjoy.