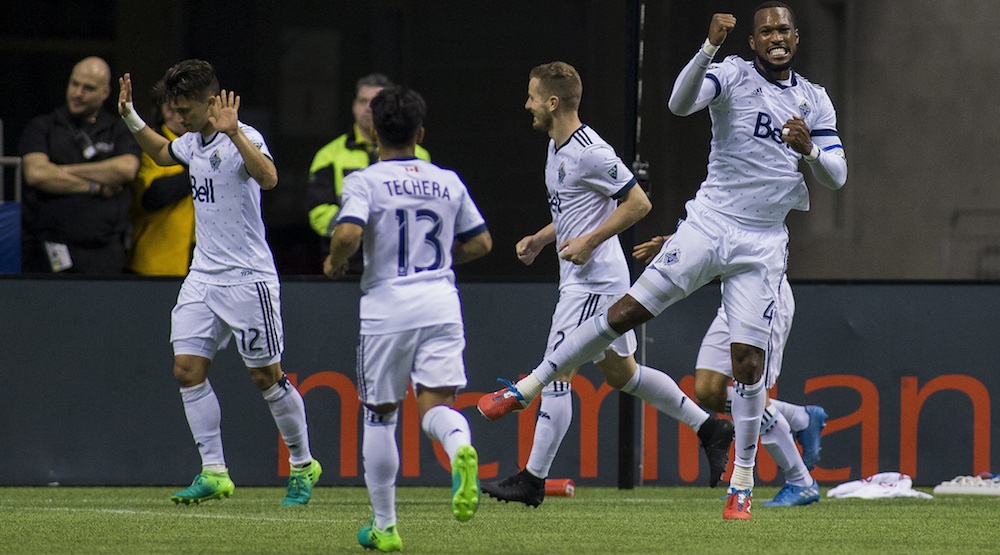 After an impressive 2015 Major League Soccer campaign the Vancouver Whitecaps looked as though they were about to become one of the league’s heavy hitters. But with expectations raised after the successes of the year before, the Caps disappointed in 2016 and missed the playoffs.

More concerning for the Whitecaps was the fact that the excitement around the team began to wane as the losses, injuries, and the list of suspended players grew by the week.

But through the first 11 games of this season, there is cause to be optimistic that the exciting and competitive Whitecaps of 2015 are back. They’re 4-2 in their last six matches, scoring in every one of them.

So as the Whitecaps prepare for their first Amway Canadian Championship match against Montreal on Tuesday, here are reasons why the Whitecaps are fun to watch again:

Sadly Edgar, who was injured in a hit and run accident last winter, was ruled out for the entire season which forced Robinson to look to Kendall Waston and Tim Parker to get the job done.

The pair struggled throughout a substandard 2016 season, but so far in 2017 Waston and Parker have reestablished themselves as two of the best centre backs in all of MLS.

Waston, who was suspended several times last year, is now the team’s captain and has found the form that made him one of the league’s top defenders two years ago.

Likewise Parker, who found himself having to contend with the dreaded sophomore slump last year, is now playing to the potential the Whitecaps saw in him when they picked him 13th overall in the 2015 MLS SuperDraft.

In short, Parker and Waston returning to form at the heart of the Whitecaps backline is great news. They have established one of MLS’ top centre back pairings, and are even chipping in on the offensive side as well.

Defending is nice, but beautiful goals like this one scored by Cristian Techera – with nice plays by Sheanon Williams and Christian Bolanos to set it up – is what gets fans out of their seats.

We’re not talking about Vancouver’s lack of a pure striker or their inability to score goals from open play anymore. It’s kind of nice.

Though he hasn’t played as much lately, Alphonso Davies is a get-you-out-of-your-seat player whenever he’s on the pitch.

He even gets fouled in spectacular fashion.

At an age when most of us were flipping burgers, the 16-year-old Davies has captured the hearts of the Whitecaps fans, and has reportedly has caught the attention of several massive English clubs including Manchester United, Chelsea and Liverpool as well.

While the Whitecaps’ run to the CONCACAF Champions League semifinals is something we won’t soon forget, it did add several more matches to an already busy start to the 2017 season.

During the first month of the season Vancouver had extra CCL matches against the New York Red Bulls and UANL Tigres added to their schedule, and it definitely stretched them to their limit.

The Caps won only one of their first four matches, but once they were eliminated from the CCL at the beginning of April they finally started winning some games.

In fact, after being knocked out of the the CCL, the Whitecaps have won four out of their last seven matches, which is impressive considering the number of injuries and road matches that the team has had to deal with during this time.

During Carl Robinson’s tenure as the Whitecaps manager we’ve seen all sorts of variations on his starting XI.

During the recent road trip we saw Robinson stick with the same starting XI for several weeks running, and it’s paid off with some big wins for the team.

The Whitecaps have been in #MLS since 2011. Tonight is only the 2nd time a manager has started the same XI three games in a row. Incredible.

It hasn’t always been easy for Robinson to stick with the same group of players, but with the wins starting to add up will anyone argue that Robbo needs to change things up?

The Whitecaps have shown an ability to come from behind in matches this season. Two of their five wins involved comebacks, most recently against LA Galaxy, and more impressively they did it against Montreal on the road as well.

Combine the ability to come from behind to win with winning games on the road, then the Whitecaps will have added an extremely valuable set of skills to the toolkit as they continue to battle for a playoff spot in the ultra competitive Western Conference.