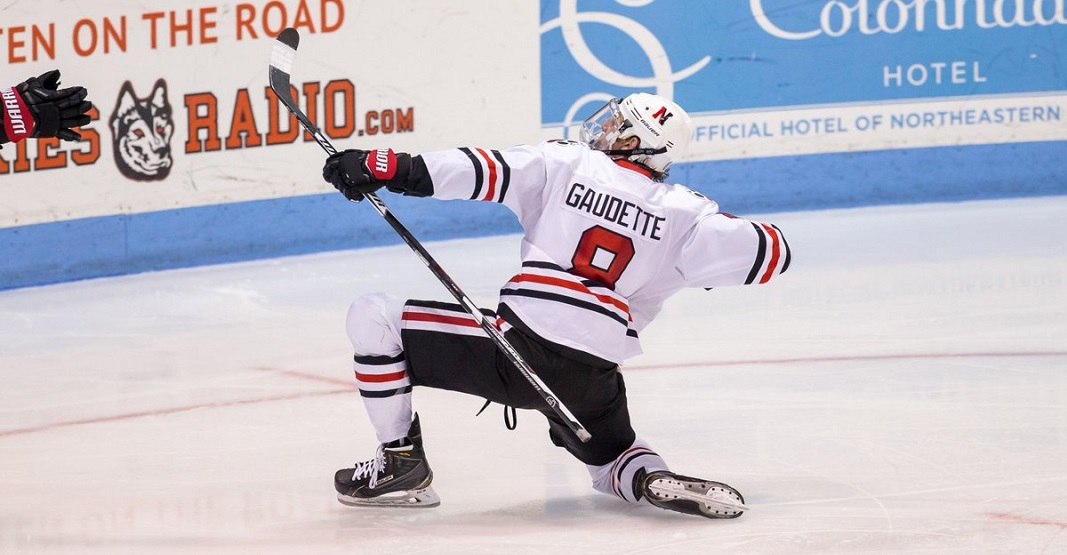 Fans struggling to get through yet another disappointing Canucks season will soon get rewarded.

The Canucks have signed prospect Adam Gaudette to a three-year entry-level contract, with the expectation that the 21-year-old will make his highly-anticipated debut this week.

Excited to have signed my first NHL contract with the @Canucks !! Can’t thank @GoNUmhockey , the coaches, teammates, and staff enough for the past 3 years! Once a husky always a husky!! Can’t wait to get out to the west coast!! 🐾🐳 pic.twitter.com/zQ5q0rDLTi

Gaudette’s NCAA season finished on Saturday, as his team (Northeastern University) was ousted by Michigan.

“Adam has had a remarkable season and college career playing at Northeastern,” said Canucks GM Jim Benning. “He’s a very talented player and has shown an ability to score, make plays and contribute in all situations at the collegiate level. We’re excited to have him join our team and continue his development as a professional.”

Gaudette’s stock has risen dramatically since being taken in the fifth round of the draft by the Canucks three years ago. His numbers have steadily improved in college hockey, to the point that he leads the NCAA in scoring with 60 points (30-30-60) in 38 games this season. He’s expected to be named a Hobey Baker Award finalist later this week.

The Braintree, Massachusetts product finished first in the NCAA in goals (30), points per game (1.58), and power play points (27). He was named also named Hockey East Player of the Year and Beanpot MVP.

A two-way American centre, he has drawn comparisons to Ryan Kesler because of his style of play – though he has a long way to go before becoming Kesler 2.0.

Assuming Gaudette suits up for NHL action this season, he’ll be following in the footsteps of Brock Boeser last season. Boeser played nine games at the tail-end of last year, giving fans a preview of what was to come by scoring four goals – including one in his first-ever game.

While it’s hard to quantify what getting a taste of NHL action can do for a player’s preparation for next season, there’s only six games remaining in Vancouver’s season. It also burns a year off his entry-level deal, meaning he’ll need a new contract in two years instead of three.

Gaudette does not know if he will play Thursday, "Crazy last 24 hours but it feels right, it happened fast but I am ready for next step." #Canucks

Gaudette will reportedly attend practice on Tuesday, perhaps making his debut on Thursday against Edmonton.

It’s worth adding though – that by burning a year of the ELC now and everything goes as planned with Seattle expansion, it does mean Gaudette would have to be protected.#Canucks

Plus, with Seattle looking poised to get an NHL team to begin play in the 2020 season – if the same rules are applied for the expansion draft as Vegas this season – Gaudette would count as a player that would need to be protected.

Teams were allowed to protect seven forwards during last year’s expansion draft, with players with two years of pro experience or less being ineligible. Players with no-movement clauses were required to be protected.

A lot can change in two years, but the Canucks don’t appear to be a team that will be hit hard by the expansion draft. Loui Eriksson’s no-movement clause runs out after this season, becoming a no-trade clause on July 1. With the Sedins likely retired by that time, it’s unlikely the Canucks would lose a difference-maker at forward.

Here’s the list of forwards under club control that’ll have 3+ years of pro experience in 2020:

So you’re free to enjoy watching Gaudette play. Hell, as Canucks fans after this season, you’ve earned it.