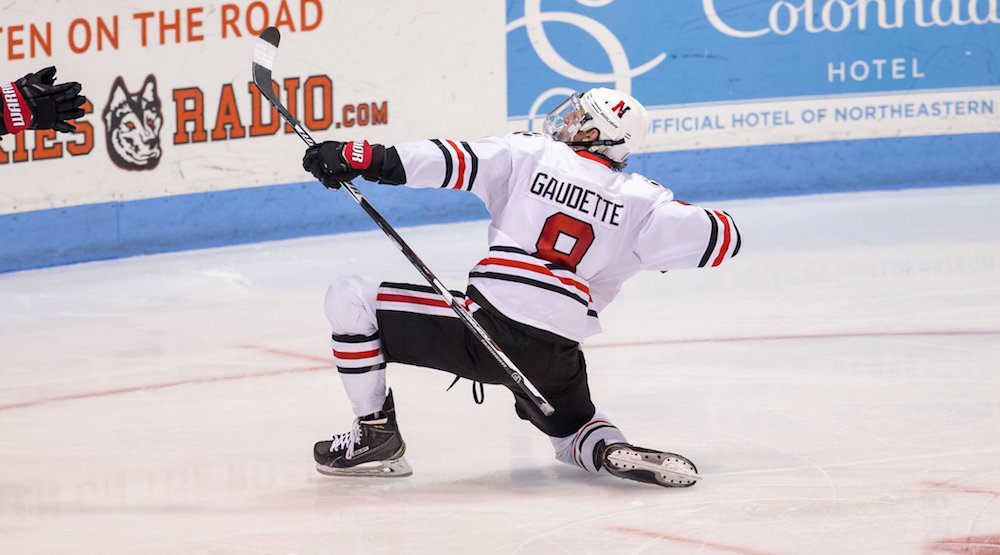 If there’s one area that Canucks fans can applaud GM Jim Benning’s exertions, it’s without question his ability to find talent in the middle to late rounds of the NHL Draft.

Nikita Tryamkin, Gustav Forsling, Carl Neill, and Guillaume Brisebois have found success with the Canucks, in the junior ranks, or in Forsling’s case, outside of the organization.

But the one name that is starting to resonate with fans in Vancouver is Adam Gaudette, the 6-foot-1, right-handed centre that the Canucks drafted with the 149th overall pick in 2015.

Gaudette just wrapped up his second season with Northeastern Huskies, where he amassed 52 points (26-26-52) in just 37 games, tying him for the most amount by a sophomore in the NCAA.

Having grown up in Brainstrom, Mass., which is a stone’s throw south of Boston, the 20-year-old understandably grew up a Bruins fan, but changed his perception of the Canucks when he found out he’d be going to the team he cheered against in the 2011 Stanley Cup Final.

“I was just happy I was drafted,” Gaudette told Daily Hive. “I took a lot of heat for being a Bruins fans then, but the past two years it’s been great. I’ve been given a lot of support from the Vancouver fans. It’s exciting to be able to have the opportunity to play for them some day.”

That “some day” will be on hold for at least one more season, as it was confirmed that Gaudette will return to Northeastern for his junior year.

Thanks to the seniors of @GoNUmhockey for a great year. Excited to come back for my junior season and continue what they started! #huskies 🐾

While Canucks fans may have liked to see Gaudette sign with the club and join the Utica Comets on an amateur tryout, the 20-year-old will have a chance to anchor down the top line for the Huskies next season. A couple of key seniors are leaving the team, giving the fifth round selection another year of maturation.

One of those leaving Northeastern is Zach Aston-Reese, who signed an entry-level contract with the Pittsburgh Penguins on Tuesday. Aston-Reese sits atop of NCAA scoring race and reportedly drew interest from the Canucks.

Gaudette played his even-strength minutes on Northeastern’s second line away from Aston-Reese, but capitalized playing on the power play with the NCAA’s leading scorer, where he set the single season record for most power play goals in school history, and still leads the league with 16. Their unit converted at higher rate than all but one team, thanks to Gaudette’s finishing ability.

Labelled as a competitive, two-way centre, his goal-scoring prowess developed significantly in his sophomore season. He can score off the rush, but also showed a knack to thread the mesh from high-traffic areas, a place where Gaudette feels will help translate his game to the next level.

“We’d go out on the power play and just score,” Gaudette said. “The type of game I play allows me to score from wherever. It’s just about being in the right place and knowing where to go. I think a part of my game that’s huge for me is trying to shoot the puck from wherever I can – I feel like my shot is one of my strong points, but I’m definitely not afraid to bang in a greasy rebound because a goals a goal, no matter what.”

Gaudette likes his shot, and it shows, given he averages 4.38 per game. He mustered 162 on the season in total, slotting him second in the entire nation.

From January 14 to February 24, Gaudette was one of the hottest players in the NCAA, where he registered 21 points (15 goals) over 12 games.

His second goal from last night was a great finish!#Canucks pic.twitter.com/VbNqgeXMhe

The offensive numbers Gaudette’s put up in only his second season is promising, but to fully take his game to the professional ranks, he’ll have to bulk up to handle the rigorous grind of what’ll likely be the American Hockey League.

“I spoke with them (the Canucks) quite a bit this year,” he said. “Really the only thing that I need to make that step to the next level is [getting] bigger and stronger, because I’m on the skinnier side right now. Adding 10-15 more pounds would probably help me be the best I could be to get to that next level.”

The Canucks need for depth down the middle is duly noted. After Bo Horvat, there isn’t much waiting in the wings. Gaudette can see a future with the club and has already established relationships with some of the key Canucks going forward.

“I know (Troy) Stecher from development camp, so we became good friends. (Thatcher) Demko from playing against him when he was at BC. We kind of knew each other and we just got to know each other more at camp and now we talk every now and then.”

How he exactly fits into the Canucks lineup one day remains uncertain, but fans of the teams should be excited. The progress from his freshman season (12-18-31) is impressive, which had NBC and TSN analyst Pierre McGuire noting that Gaudette might have been the steal of the 2015 Draft.

“I like to model by game around Patrice Bergeron and Jonathan Toews. I try to be that 200-foot guy that can produce and be used in all situations – important faceoffs, on the power-play and penalty, or late in games on a 6-on-5.”