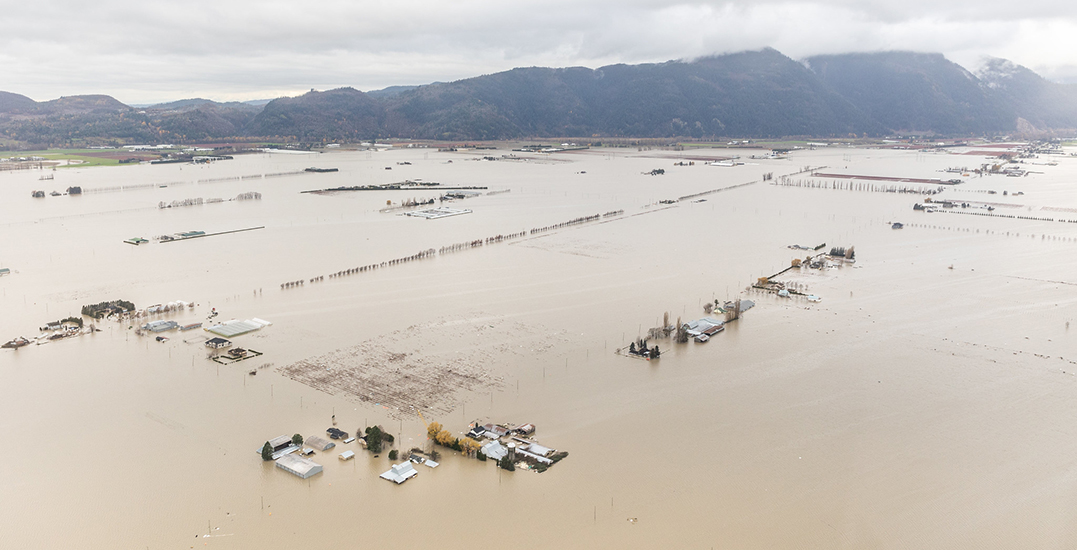 An aerial view of the flooding that devastated Abbotsford in November 2021. (Government of BC)

The cost of new measures for preventing Sumas Lake from reforming could range between $209 million and $2.797 billion, according to a new City of Abbotsford report outlining potential options.

Key to the options is their effectiveness in preventing water overflowing the banks of the Nooksack River in Washington State from starting a cascading sequence of events if the Sumas River’s flood boxes are closed due to water levels on the Fraser and Vedder Rivers.

Significant flows — especially when the flood boxes are closed — can overflow the Sumas Dike, causing water to run into the former lake bottom area of Sumas Prairie, reforming the lake.

Abbotsford’s rainfall event in November 2021 is estimated to be a one-in-100 year event, with the city recording 540 mm over the month — about 33% of Abbotsford’s average annual rainfall over November alone. The heavy rain system also caused the season’s early mountain snowpack to undergo a rapid melt, adding to the freshet volume. 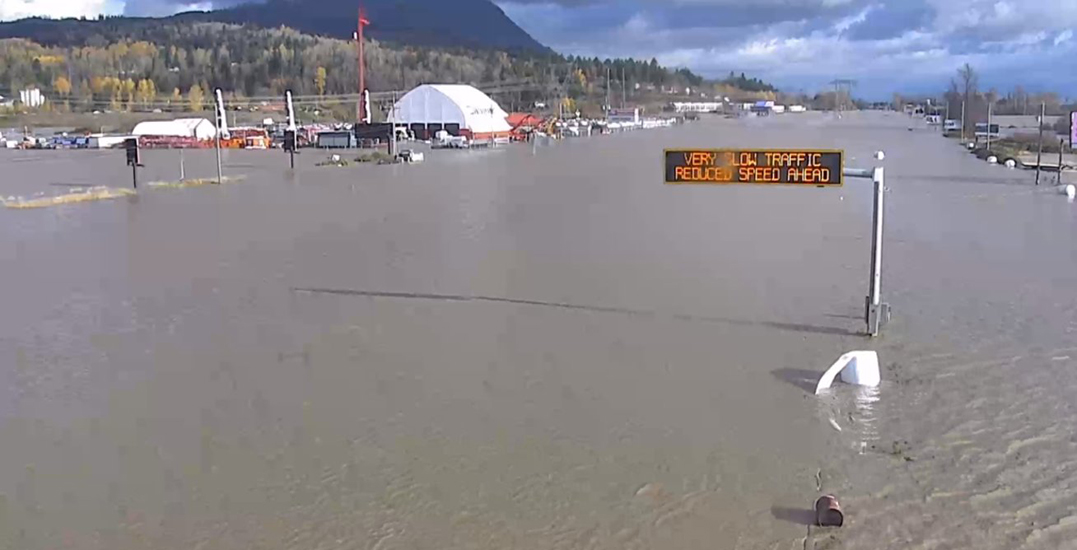 Highway 1 in Abbotsford flooded with water g November 2021. (Government of BC).

The first and lowest cost option of $209 million would only create permanent dike upgrades to the temporary repairs and enhancements performed during last fall’s floods and improve the resilience of the Barrowtown Pump Station. But it would not meet BC’s current minimum flood prevention guidelines, only offering a one-in-35 year flood event.

The second option reaching a cost of $1.297 billion, includes adding a new Sumas River pump station, upgrades on Barrowtown Pump Station, and permanent work on dikes temporarily repaired and enhanced during the flood. However, this would not protect Abbotsford from a similar November 2021 event, given that the measures would only be effective for a one-in-50 year to a one-in-100-year event. 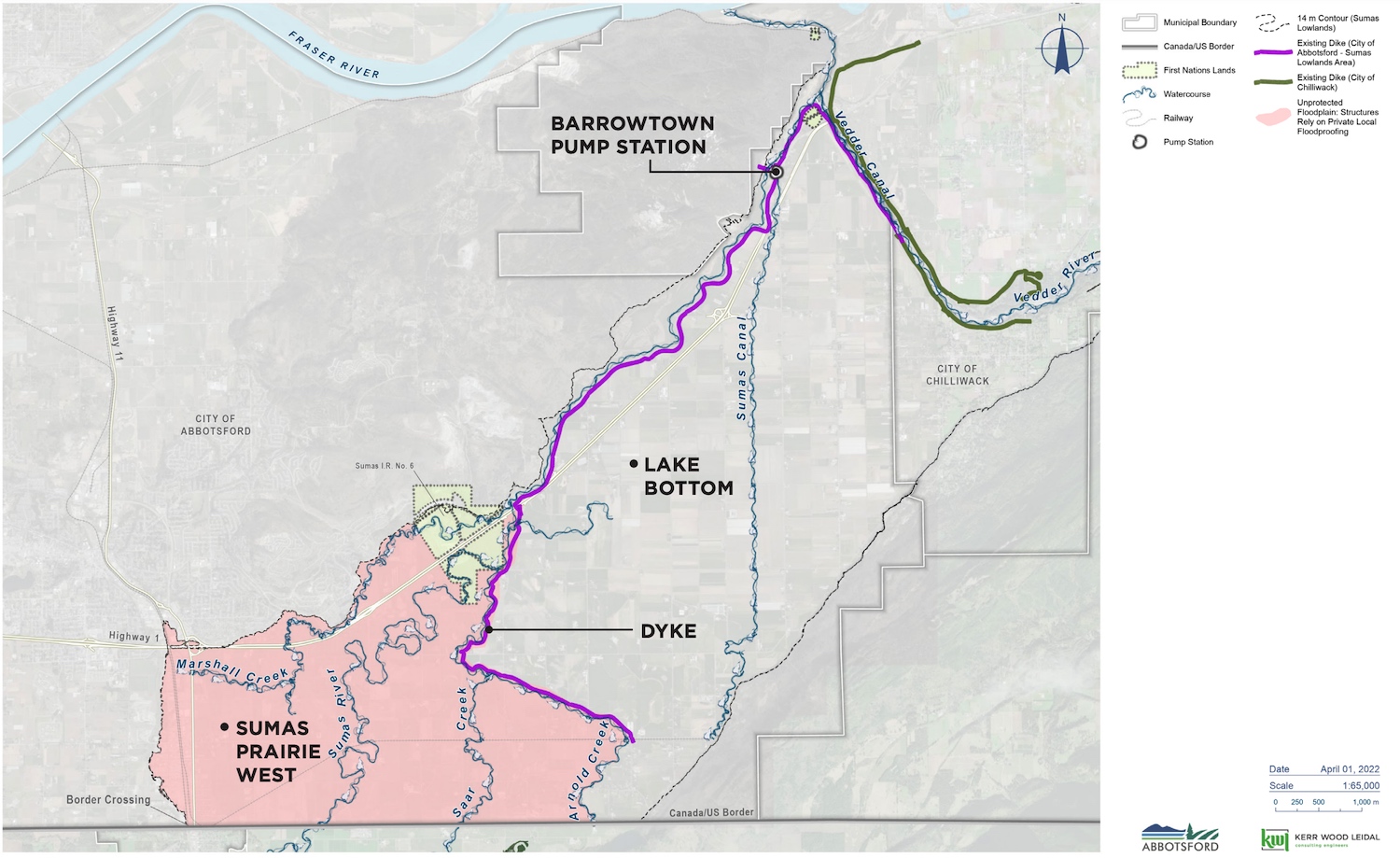 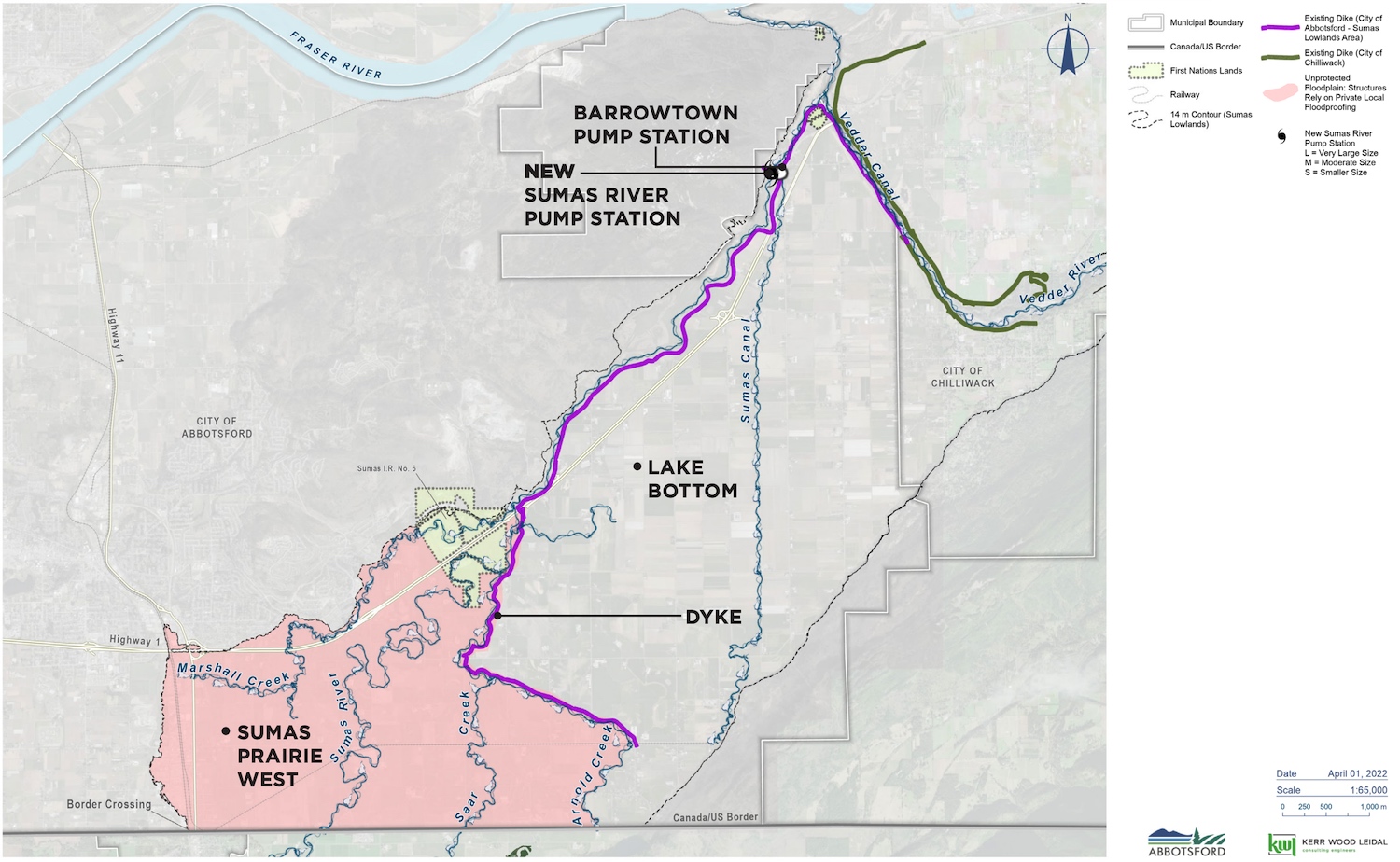 Only multi-billion-dollar plans will have the potential to mitigate the scale of last year’s flooding.

As for option four, the most expensive and effective strategy, the measures entail building new dikes on both sides of the Sumas River through Sumas Prairie West, extending along the border protecting the Huntingdon area, as well as reinforcing and raising existing barriers, and creating a narrow floodway through Sumas Prairie West. Other mitigation features include constructing a new Sumas River pump station and three new pump stations in Sumas Prairie West, upgrades to the Barrowtown Pump Station, and new controlled overflows for only very significant river flow events. In addition, both the Southern Railway and the segment of Highway 1 between Sumas First Nation Reserve and Atkinson Road will be raised. The total cost of this option for comprehensive protection against a one-in-200 year event is $2.797 billion. 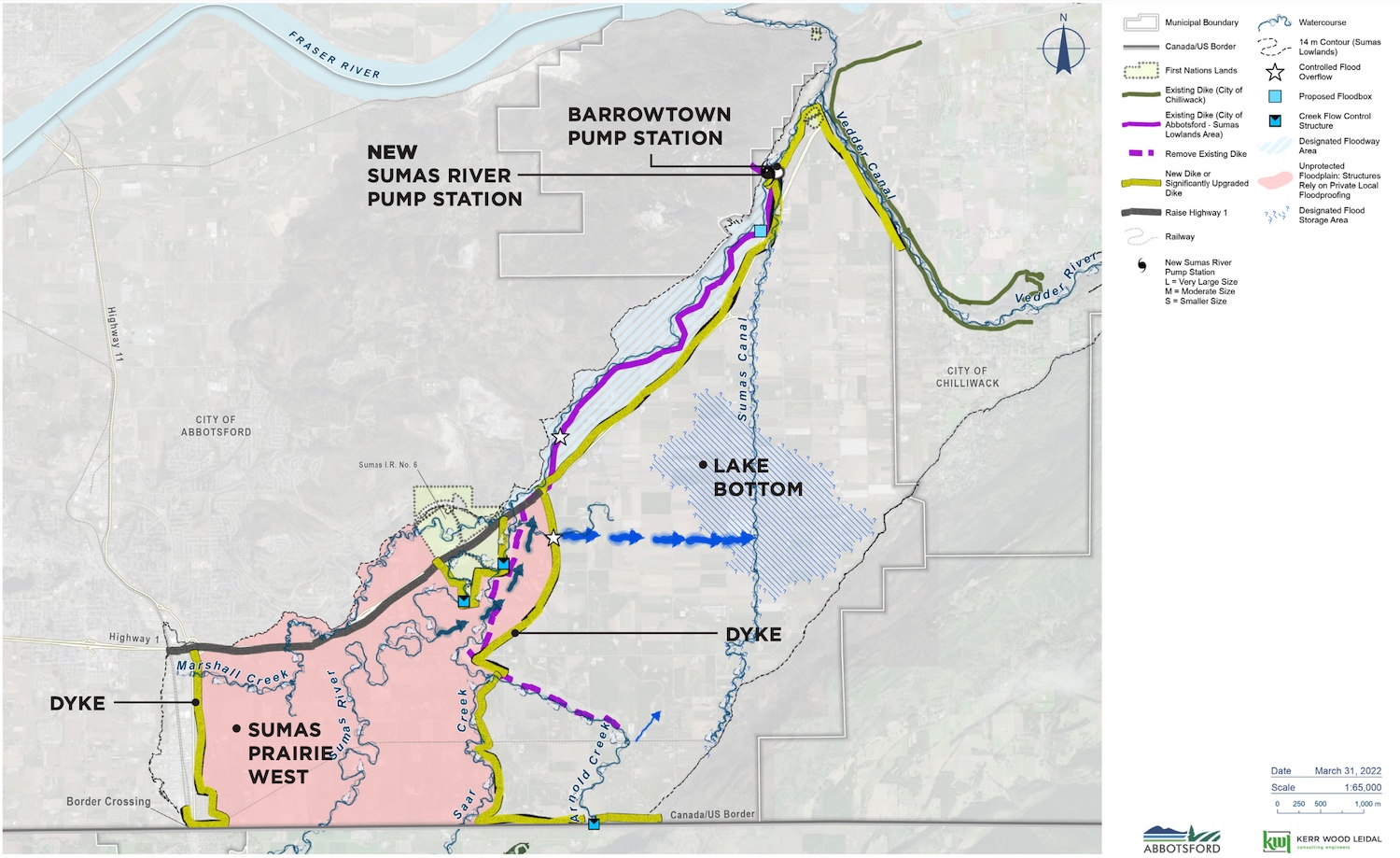 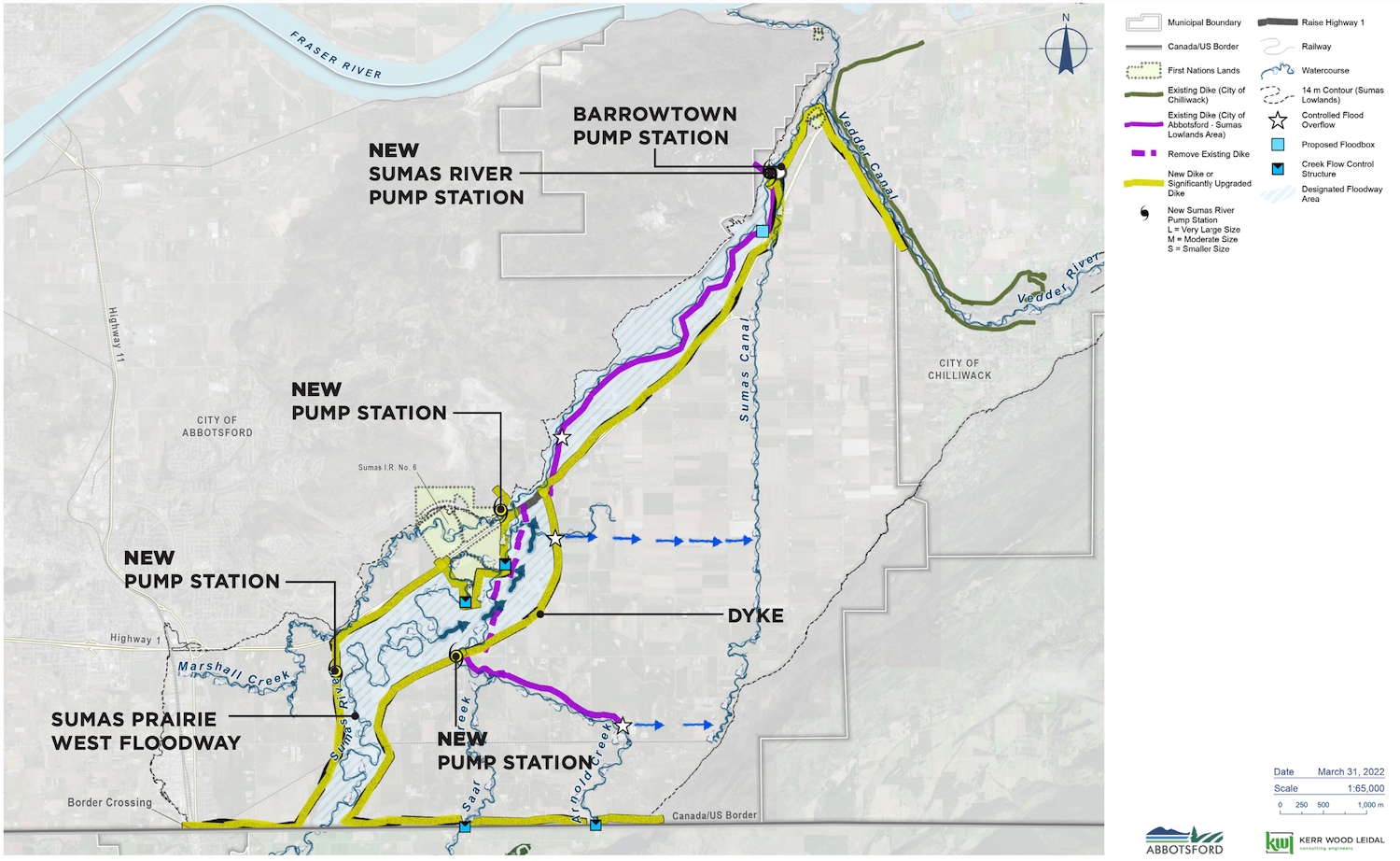 The municipal government is currently consulting residents, businesses, other levels of government, and stakeholders on the various options.

In late Spring 2022, Abbotsford City Council is expected to select a preferred flood mitigation option and develop a recommendation to the federal and provincial governments with a phased plan.

If an option is selected and approved, the city will turn to focus its efforts on seeking funding from the federal and provincial governments starting in Summer 2022.

The city is also seeking the provincial government to specifically fund the raising of Highway 1 and the Southern Railway in the various options.

For years, the provincial government has been developing plans to rebuild and widen Highway 1 from Langley to Abbotsford, but the extent of the future upgrade project will end at Whatcom Road — west of the city’s proposal.

The agricultural plains that currently exist southeast of Sumas Mountain were previously a shallow lake that reached up to 134 sq km in size during the seasonal freshet — larger than the land area of the City of Vancouver. A century ago, European settlers built the first canal and pump station to drain the lake for new productive farmland and reduce the mosquito population. The Barrowtown Pump Station was completed in 1984, replacing the original pump station constructed in the 1920s. 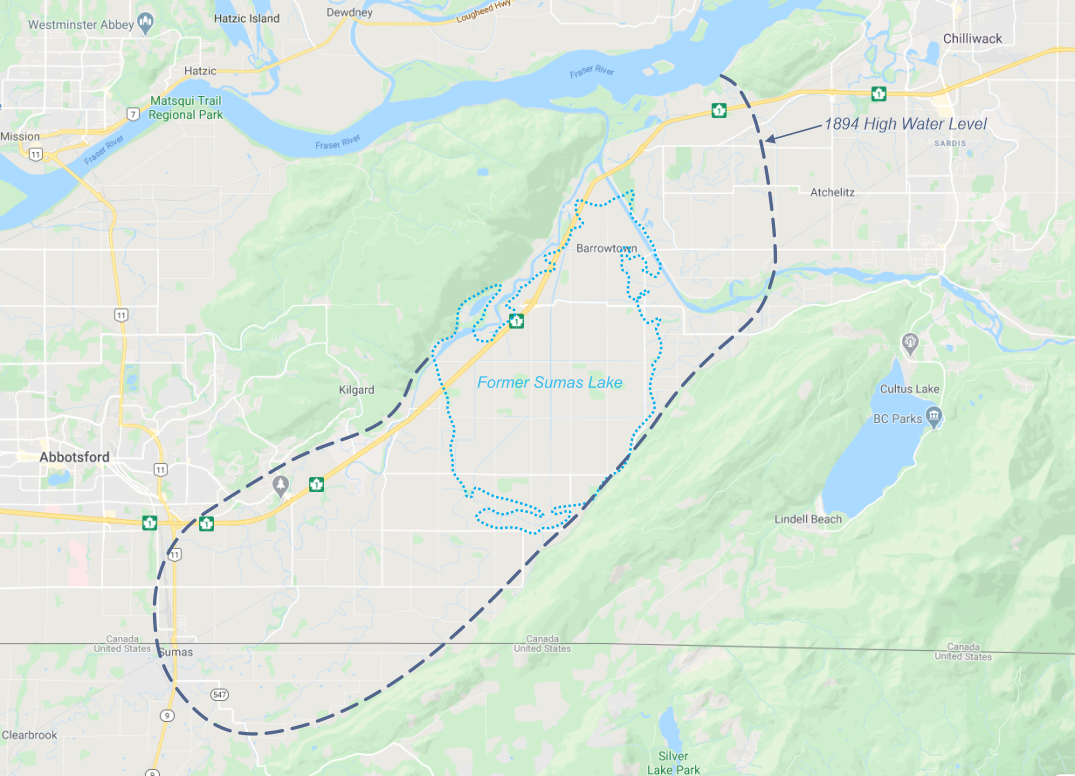 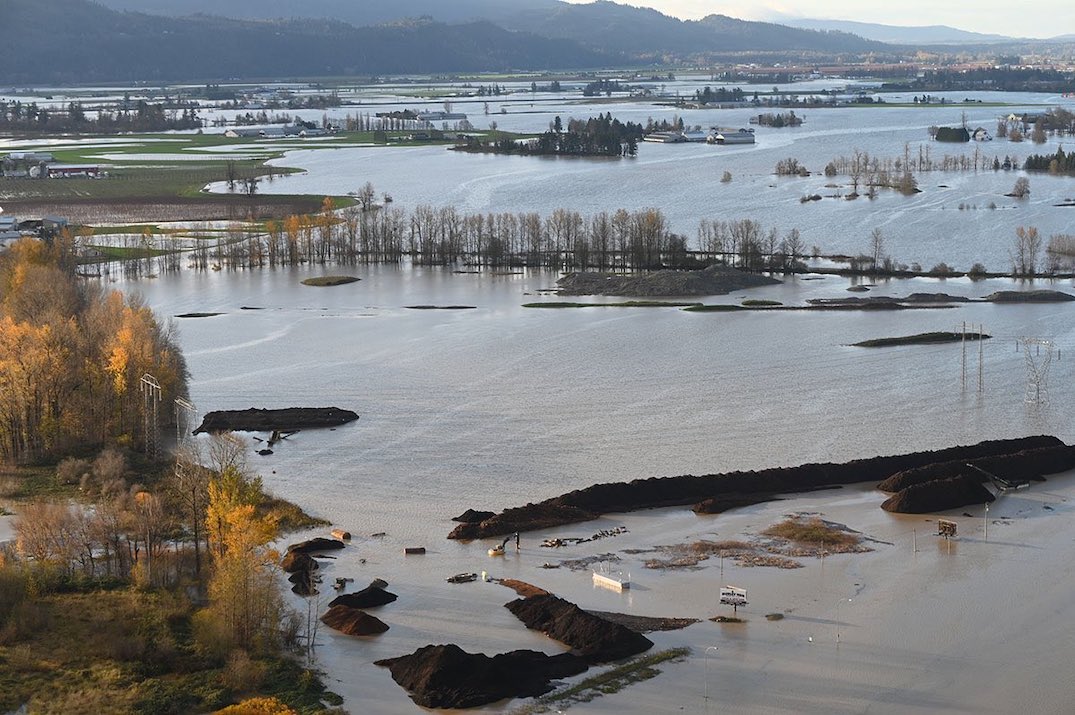 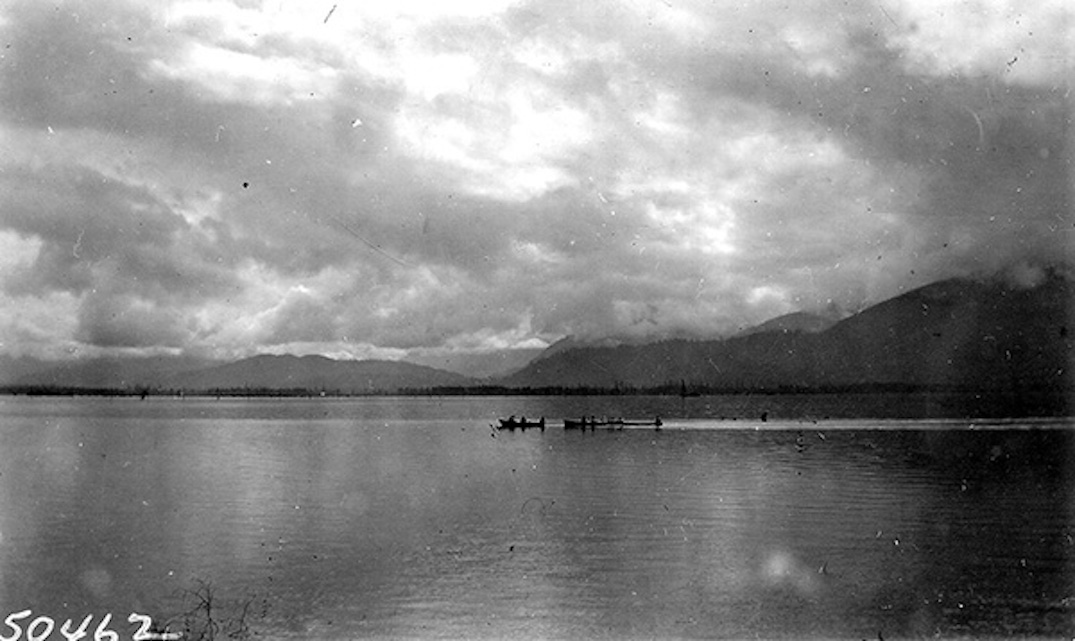 Sumas Lake before its draining, early 1900s. (The Reach Gallery)

While the 2021 flood was devastating, there have been a handful of flooding events in the area in recorded European history, with the 1894 event deemed to be the most extensive, stretching from Harrison to Richmond. Prior to last year’s event, the previous flood in the area was in November 1990, when the Sumas Prairie and the adjacent segment of Highway 1 flooded after the Nooksack River overflowed after heavy rainfall.