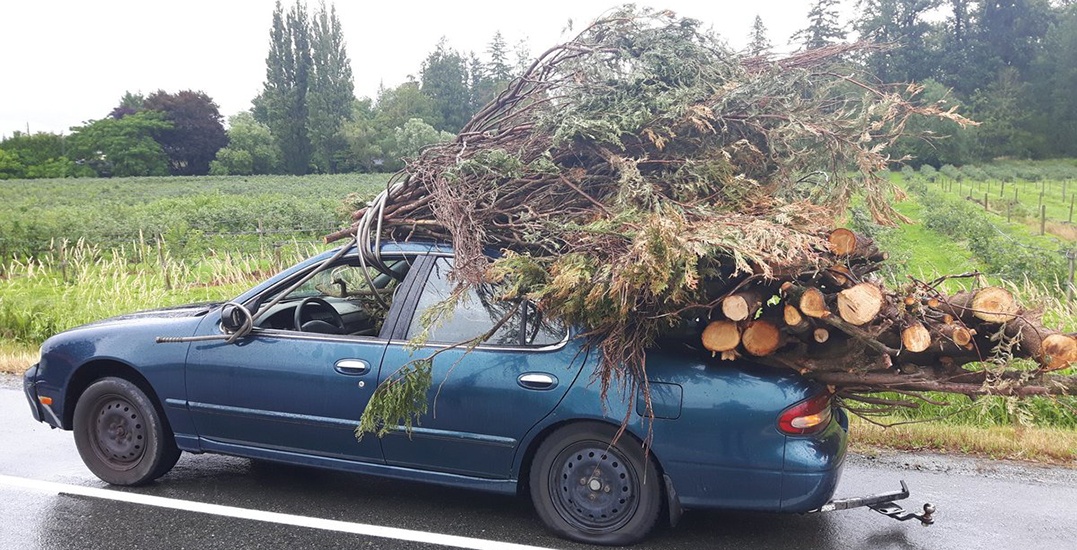 Over the Canada Day long weekend, a Constable of the Abbotsford Police Department shared a photo of a questionable driving scenario that he had to take care of.

“Is there a problem officer?”

Me: Are you serious?

“I assure you it’s safe, I tied it down with an old garden hose” pic.twitter.com/RwNyRXw5b3

The incident that Cst. Mangat took part in took place on Gladwin Road and Downes Road in Abbotsford, on Saturday, June 30, in the afternoon.

A male driver was pulled over with several trees attached to the roof of his blue sedan, all tied down via garden hose.

And yes, that is the garden hose tied onto the driver’s side mirror.

A representative from the Abbotsford Police Department explained that the driver was in violation of a number of rules from the Motor Vehicle Act, although she didn’t specify which ones.

Upon further inspection, however, it’s easy to see that in addition to a lack of vision, the driver also had bald, flat tires, unsafe towing equipment, and a number of additional body and door issues.

The driver ended up being fined and received a stern warning. The vehicle had to be towed, simply because it was too unsafe to drive.

According to the Abbotsford Police Department, the driver was cooperative and extremely apologetic. He “initially did not understand the risk of what he was doing” and was “caught up trying to quickly get yard work done.”

He did, however, admit after that “he should have made a few smaller trips or waited until he fixed his trailer hitch so he could use his trailer.”