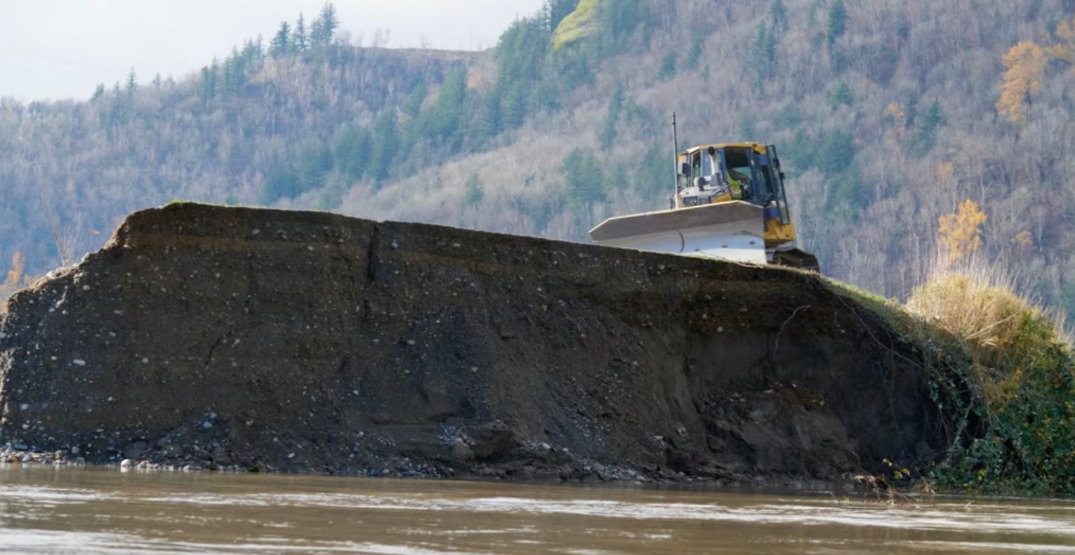 The replacement dike currently being built (City of Abbotsford/YouTube)

The City of Abbotsford will be abandoning plans to build a levee to offset a dike breach near the Sumas Prairie.

Crews will instead be focusing on repairing the dike breach, with Abbotsford Mayor Henry Braun adding that they hope to do this before Tuesday, when major precipitation is forecast in the region. Work is expected to take place 24/7 prior to that weather event.

The mayor suggested yesterday that water would be pooling in the Sumas Prairie through the breached dike, but as of Friday afternoon, that doesn’t seem to be the case. This has given crews some additional options that they didn’t have before.

He told reporters that crews are working on building a temporary replacement for the dike.

“I do want to acknowledge the immense efforts of our city staff, especially our engineering team and the first responder teams that are leading this emergency response.”

He also provided an update on the number of people that have been evacuated from the Sumas Prairie, which currently stands at 680. Abbotsford’s mayor also repeated calls for people to heed the advice of emergency officials and to follow the restrictions that are currently in place.

“I know it may look safe to people, but it’s not safe until we’ve done risk assessments of what’s out there.” He added that asphalt is crumbling on many of the roads in the area, and that if someone tried to utilize those roads, it could prove to be fatal.

A CH-148 from 443 Sqn supporting Op LENTUS, conducted a reconnaissance mission to assess damage in lower mainland BC. Op LENTUS is the @CanadianForces response to natural disasters in Canada, with troops and equipment deployed to assist British Columbia during the floods. pic.twitter.com/6gmrqW14vm

Canadian Armed Forces (CAF) members will be helping crews with efforts in the region. Last night, 64 soldiers from Edmonton arrived in Abbotsford at around 7 pm. Another 60 are expected to arrive in the region today. CAF personnel are expected to be in BC until December 17 at the earliest. Other members will be flying in food, water, and supplies to communities that have been cut off from BC supply chains.