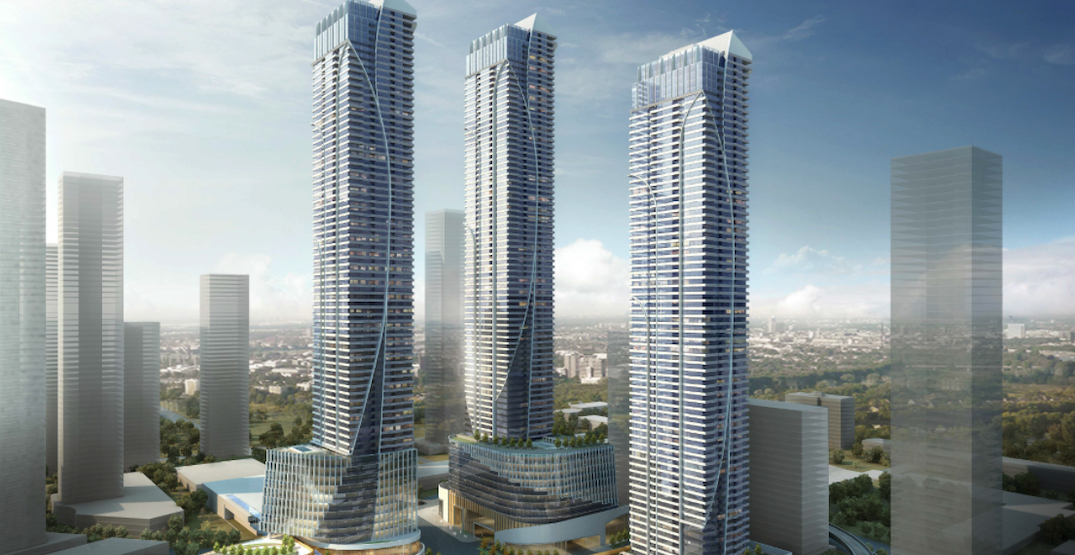 If approved by Burnaby City Council later this spring, the City of Burnaby will be home to the new tallest building in British Columbia — taller than all existing towers in Metro Vancouver, and other future towers proposed, planned, or currently under construction.

Moreover, it could also be the tallest building in Western Canada, exceeding Edmonton’s Stantec Tower and Calgary’s Brookfield Place East.

This project will replace surface parking lots and the former Sears Outlet Store building on a combined property size of 6.2 acres. SHAPE Properties, the owner and developer of the adjacent City of Lougheed mall, sold the property to Pinnacle International about four years ago. 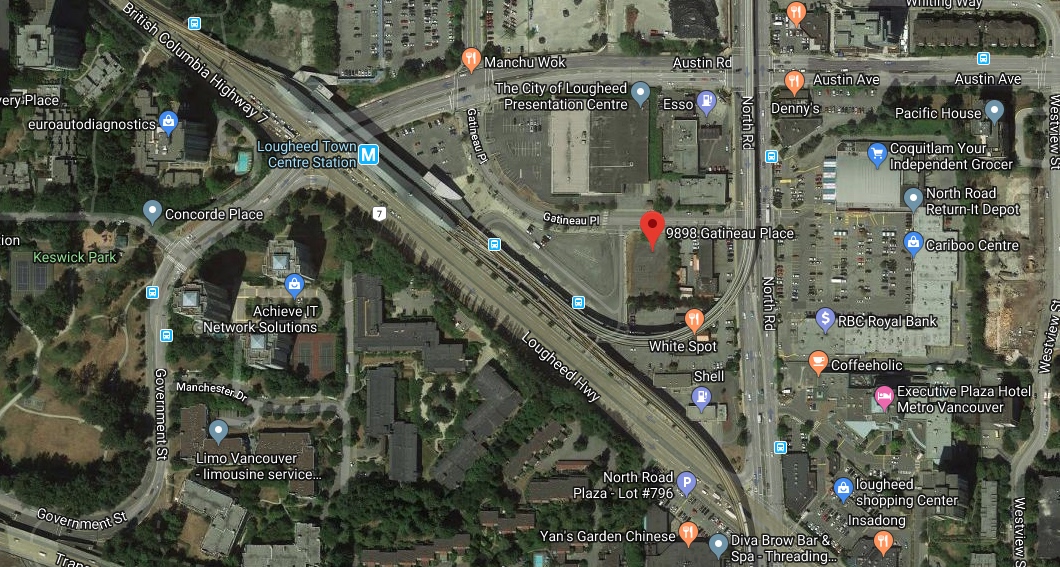 There have been some major changes to the rezoning application ever since Daily Hive Urbanized first covered the project nearly three years ago, as the project at Gatineau Place has now grown to four towers across three phases, instead of the previous concept of three towers in a single phase. As well, a separate secondary property located nearby at 3846 Carrigan Court is now involved in the overall development strategy.

Gatineau Place’s first phase currently under consideration by city council entails two towers reaching 80 storeys and 73 storeys on the northeast parcel of the lot. This includes 67 storeys and 60 storeys of residential uses, respectively, on top of a shared 13-storey office and retail podium.

With office and retail levels typically designed with taller ceiling heights than residential levels, both towers in the first phase will be some of the tallest buildings in the region. Exact heights have not been provided at this time, but the tallest tower, 80 storeys, can be assumed to be at least about 800 ft (244 metres), if not more. 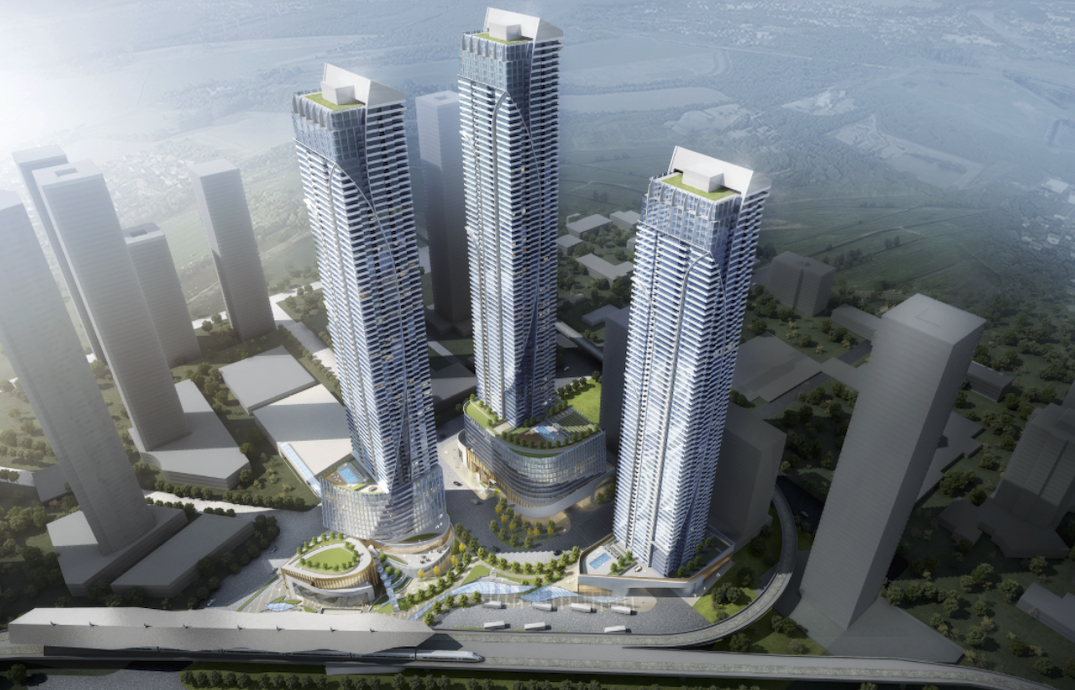 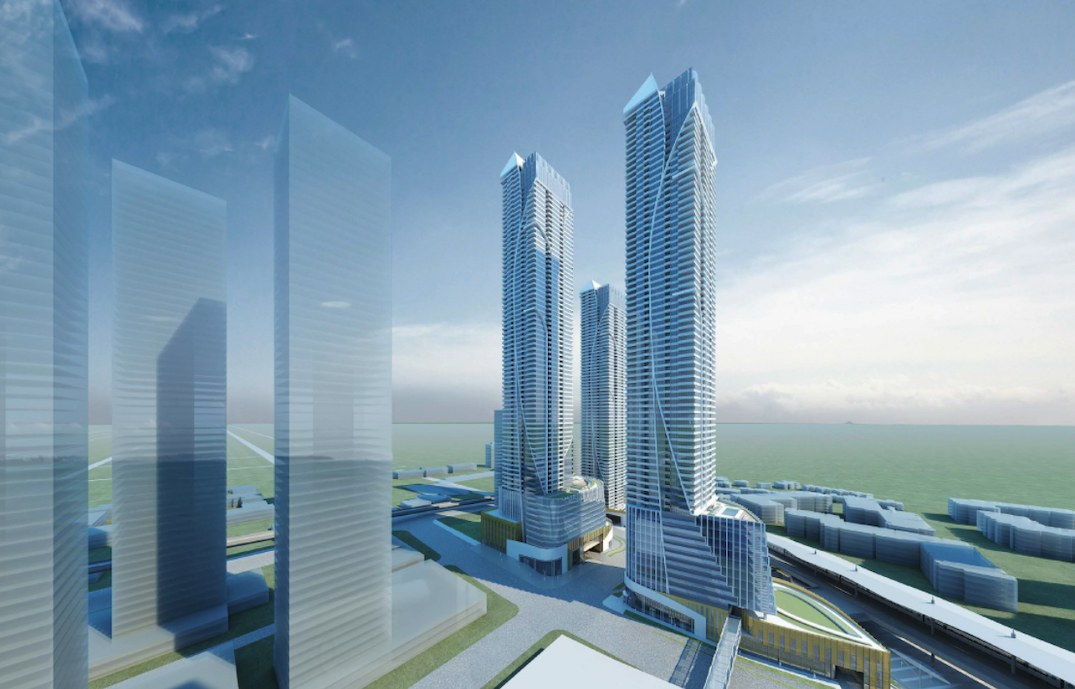 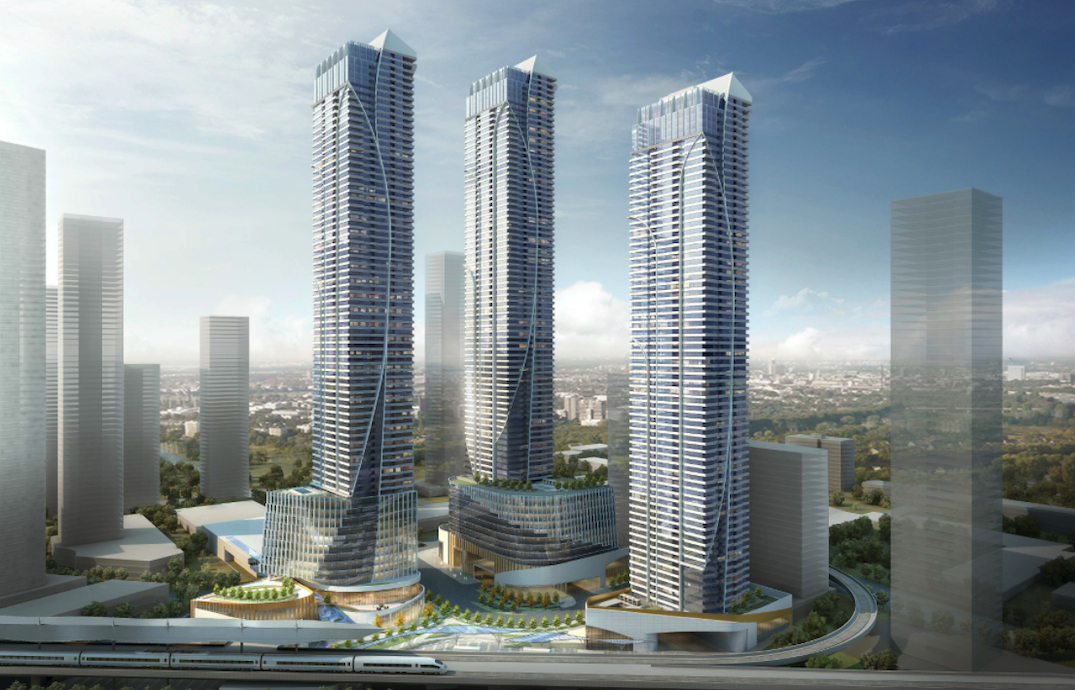 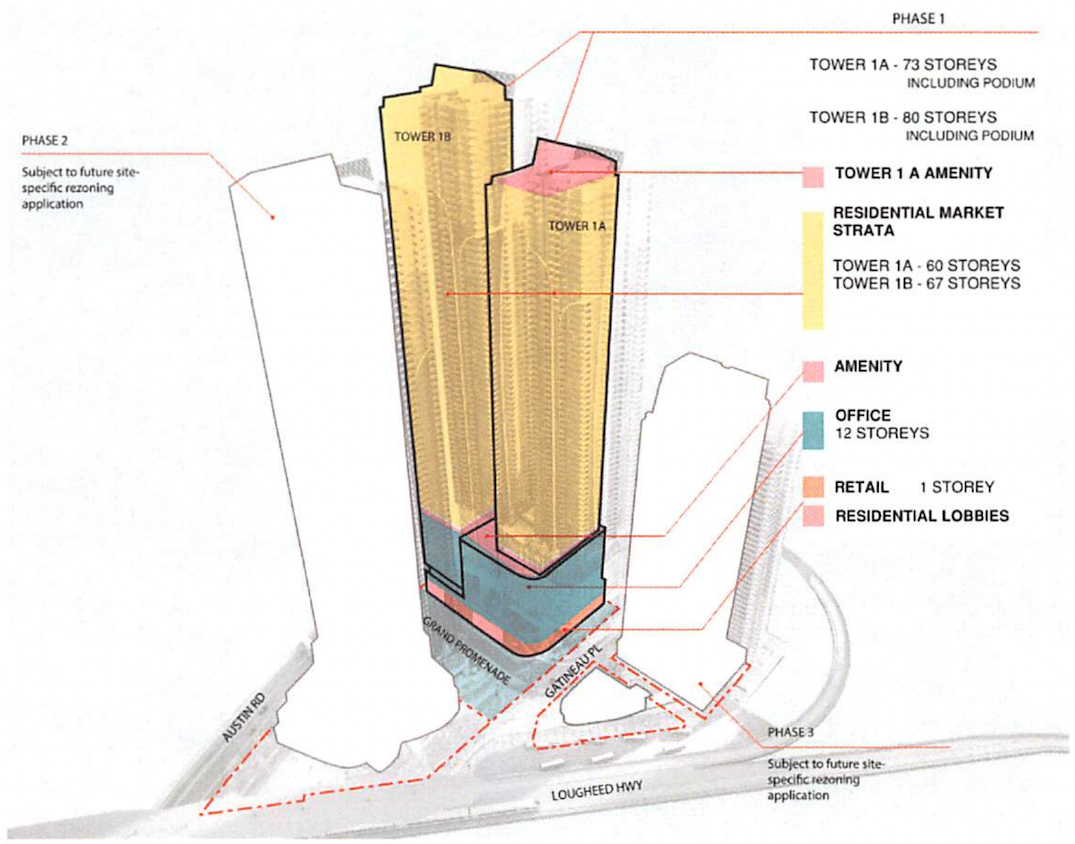 Wedged between the ground-level’s 13,000 sq ft of retail uses and the residential floors, 12 storeys in the podium will contain 515,000 sq ft of office space.

The combined total floor area of both towers in the first phase is 1.9 million sq ft, establishing a floor area ratio (FAR) density of a floor area that is 22.25 times larger than the size of the 4.5-acre northeast parcel.

Updated conceptual artistic renderings of this project showing the revisions are expected to be released over the coming weeks. 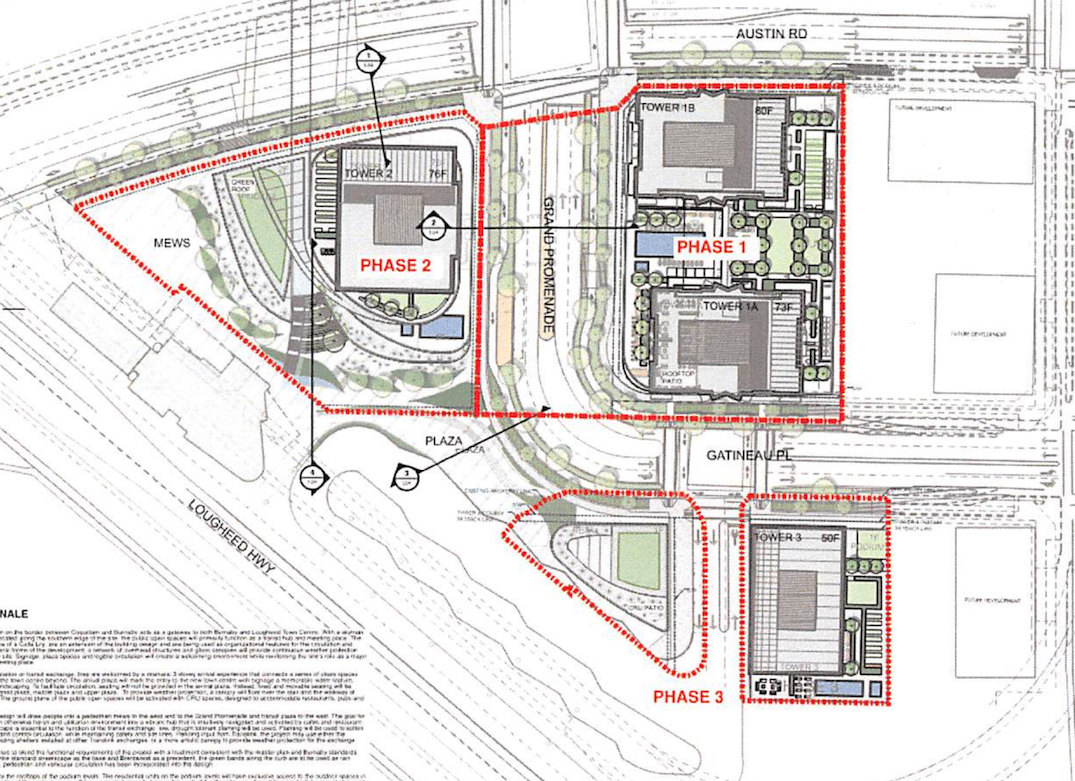 The future second phase, entailing a 76-storey tower, is located on the western parcel of the lot, while the third phase on the southeast parcel consists a 50-storey tower.

Both residential towers within the second and third phases will incorporate a significant commercial use podium, including a hotel and additional office space strategically next to the SkyTrain station and bus exchange.

All three phases of Gatineau Place combined with four towers will carry a total floor area of 3.35 million sq ft for a FAR density of 17.24. This includes over one million sq ft of office, hotel, retail, and restaurant space. The design firm is JYOM Architecture.

Gatineau Place’s second and third phases are on hold and will be considered in the future through separate rezoning applications.

City staff state the municipal government and proponent were informed by the provincial government’s BC Transportation Financing Authority (BCTFA) that bus access impacts on provincial-owned land adjacent to SkyTrain to accommodate the project’s density would not be allowed.

As well, it was determined by city staff that “the site could not feasibly accommodate the additional density associated with the site’s inclusionary non-market rental requirement within an appropriate massing and form.”

To fulfill the inclusionary rental housing requirement, the developer is now proposing to build 546 secured non-market rental homes at 3846 Carrigan Court — a property the developer owns west of the SkyTrain station, just on the south side of Lougheed Highway. 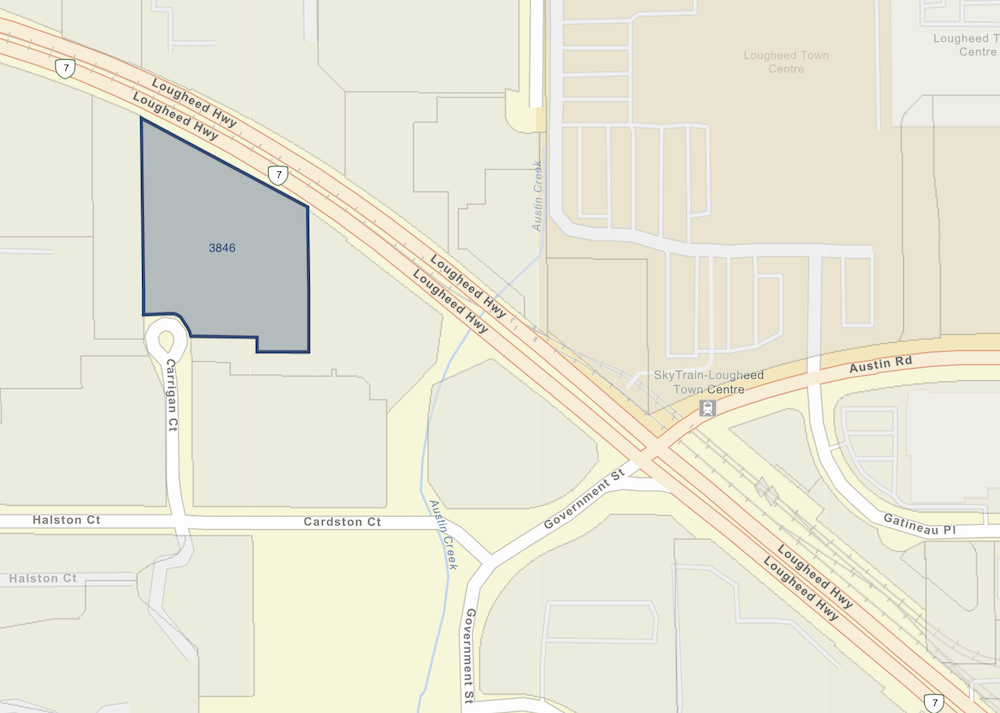 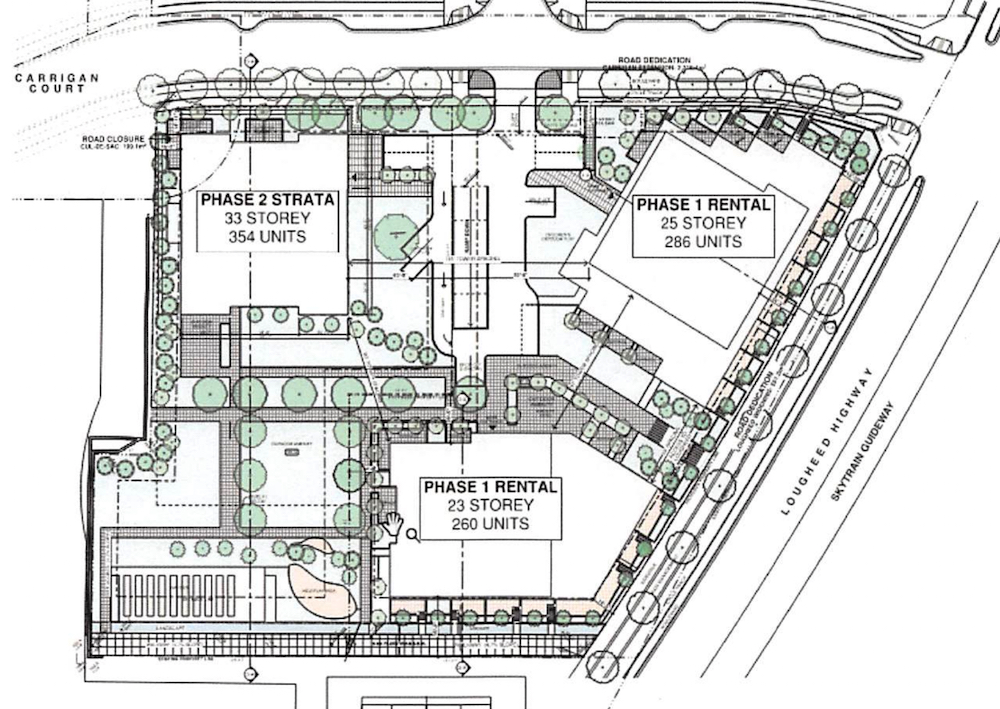 The Carrigan Court site would contain three towers, including a 25-storey rental tower, a 23-storey rental tower, and a 33-storey condominium tower. The 546 non-market rental units includes 141 rental units to replace the existing 1970-built, three-storey apartment buildings on the site. The condominium tower would have 354 units, bringing the total number of homes at Carrigan Court to 900 units.

The second and third phases of the main Gatineau Place complex will only proceed after BCTFA, TransLink, and the developer complete negotiations on a land swap for the properties each entity owns immediately next to the SkyTrain station.

The proposed Carrigan Court redevelopment total floor area is 735,000 sq ft, including about 319,000 sq ft of transferred inclusionary rental housing density from Gatineau Place. The FAR density is 4.95 times larger than the size of the 3.4-acre lot.