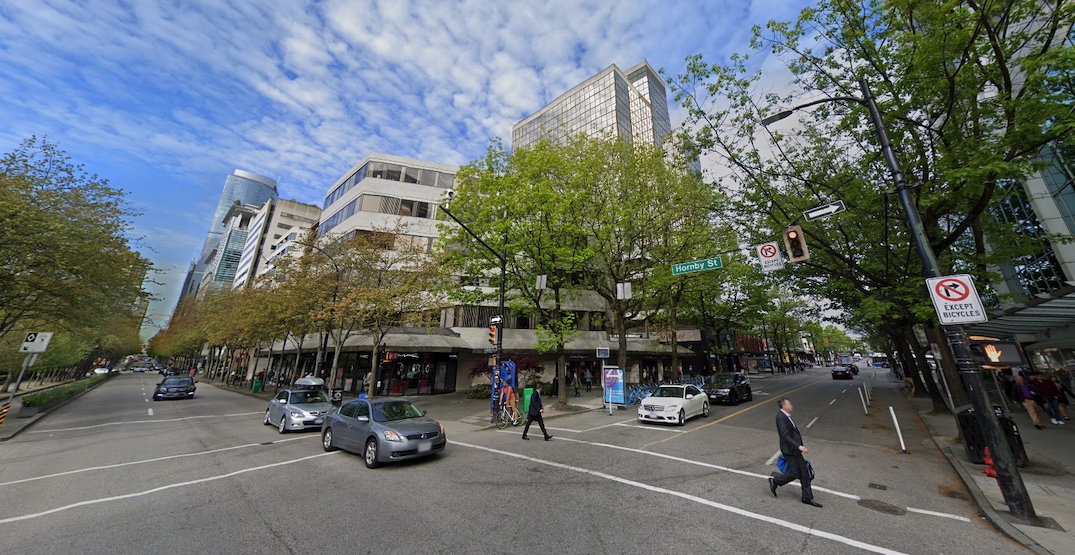 The six-storey office and retail building at the highly prominent southwest corner of the intersection of Robson Street and Hornby Street in downtown Vancouver could see redevelopment.

Reliance Properties has acquired the 1979-built property at 815 Hornby Street, which helps bookend the western end of Robson Square and the new 800 Robson Street plaza.

Jon Stovell, the president and CEO of Reliance Properties, told Daily Hive Urbanized his company is in the process of selecting an international architectural firm to develop some redevelopment design concepts soon.

He says it will be a mixed-use development, with an upscale hotel as a “strong consideration” given its location in the very active core of the city centre, and its close proximity to Hotel Vancouver.

“We think it’s one of the most important sites in the whole city. It is the cultural heart of the city, so we’re talking to quite a wide range of really global-level architectural firms,” said Stovell. 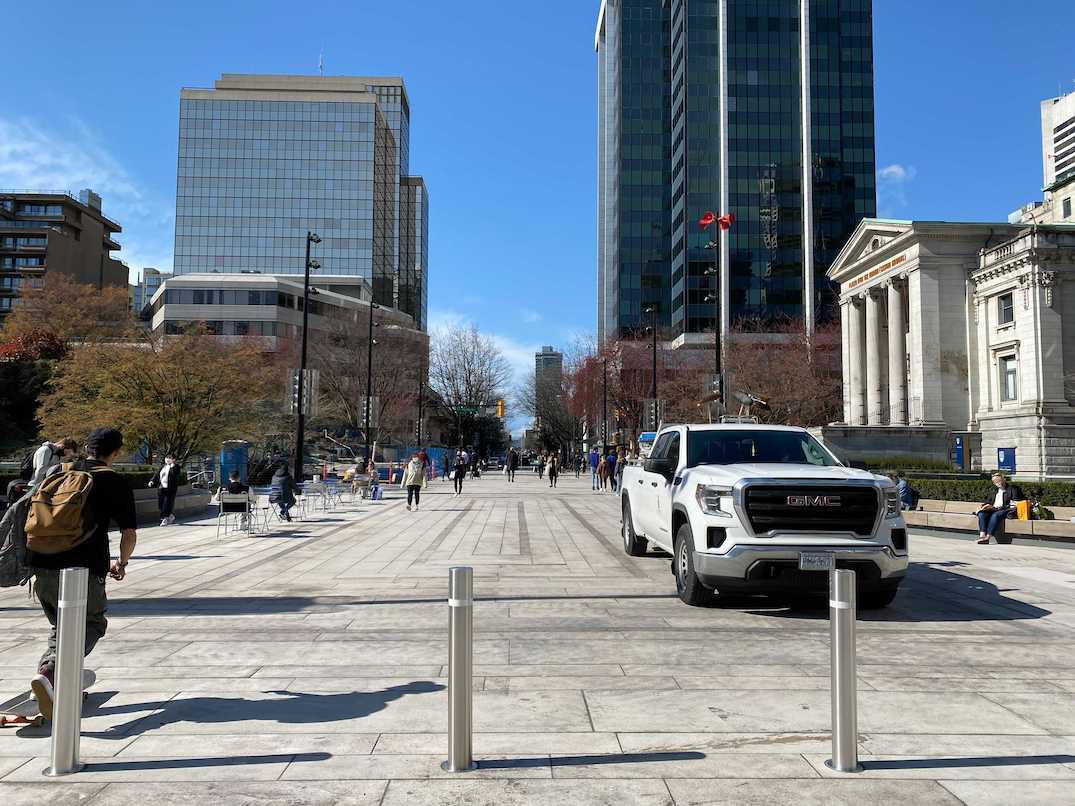 Prior to the pandemic, there was a severe shortage of hotel rooms in the region due to residential conversions and redevelopments, and this overall shortage has been exacerbated by government acquisitions of accommodation properties over the past year. In 2018, Metro Vancouver’s hotel room supply was 10% lower than a decade earlier, just before the Olympics.

The redevelopment could also include a residential component, given that it is permitted by existing city policies. A view cone that crosses over the site will limit the building’s height to roughly 360 ft (110 metres). Shadowing considerations by city staff are likely, given the site’s adjacency to the plaza, Robson Square, major intersections, and the Robson Street retail village.

The existing building has roughly 60,000 sq ft of office space, plus ground-level retail frontage for Salvatore Ferragamo and MAC Cosmetics. Several retail units are currently vacant, including the Starbucks that recently permanently closed.

Records show Reliance Properties’ acquisition of the property closed on May 31, 2021, with six commercial properties sold separately for a combined total value of approximately $67 million. 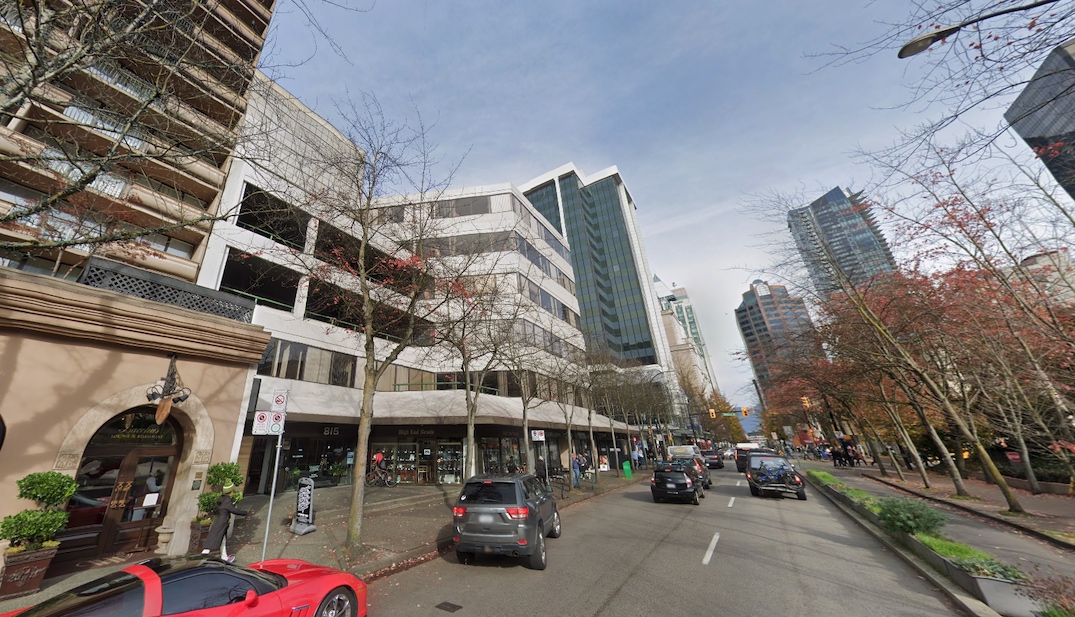 Additionally, Stovell says the company is also in the process of forming a land assembly on the block at the northwest corner of the intersection of Dunsmuir Street and Richards Street — just kitty corner from Holy Rosary Cathedral. The company already owns 501 Dunsmuir Street, which is currently occupied by businesses such as Ramen Gojiro and Daeji.

He expects this Dunsmuir and Richards site will be “a very large office complex” when the land assembly of additional properties is complete.

The area is being transformed by the gravitational pull of Amazon’s major presence just one short block down the street, with the tech giant’s combined 1.25 million sq ft of office with both the newly built 402 Dunsmuir Street office building and the under-construction The Post redevelopment. These two buildings alone, not including Amazon’s presence in Telus Garden and other office buildings downtown, will house 7,000 office workers.

Reliance Properties’ plan to build office towers near the Amazon hub will contribute to the eastward expansion of the Central Business District. 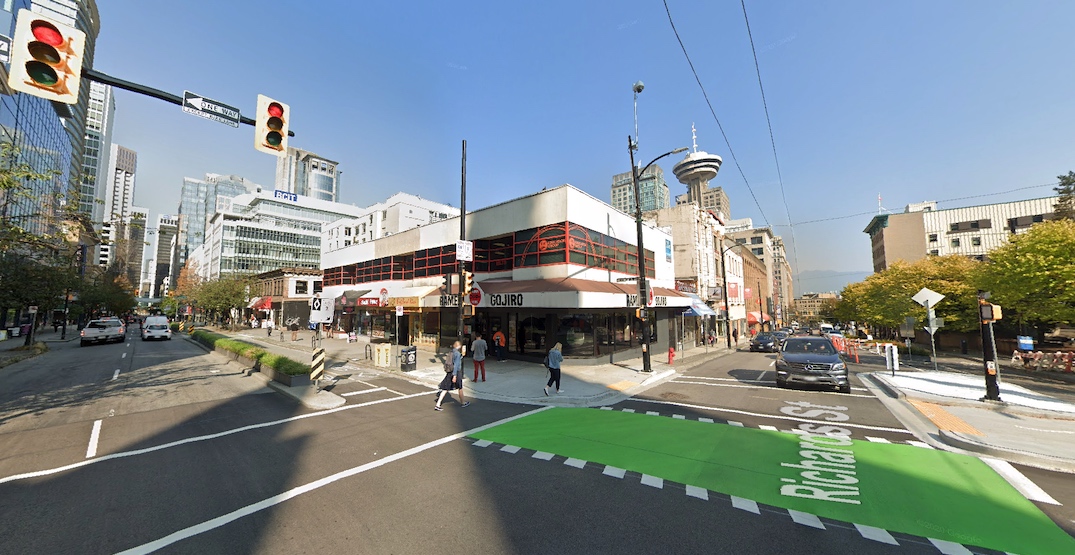 Stovell adds that his company is currently working on 25 projects that are in various proposals and regulatory approved stages, including five buildings that are under construction.

By the end of this year, site preparation for construction is expected to begin on the 32-storey office tower at 1166 West Pender Street. Last summer, Vancouver City Council approved Reliance Properties’ proposal to replace the parkade at 443 Seymour Street with a 29-storey office tower. Both of these projects combined will create over 800,000 sq ft of office space.

Vancouver, in particular, has one of the world’s strongest office markets, even after more than a year of the pandemic’s global economic toll.

According to CBRE, as of the end of the second quarter of 2021, downtown Vancouver’s office market had a healthy vacancy rate of 6.6% — the lowest office vacancy of any major city centre in North America. Much of the office market is driven by the strong growth of the tech industry, especially from Amazon.

On Monday, Reliance Properties announced it had submitted a formal rezoning application to the city for the redevelopment of the parkade at the southeast corner of Dunsmuir Street and Thurlow Street — the rear of its office building property at 1075 West Georgia Street. The proposal is for a 47-storey tower with 478 rental homes, including 104 units of below-market rental housing for emergency and frontline workers.