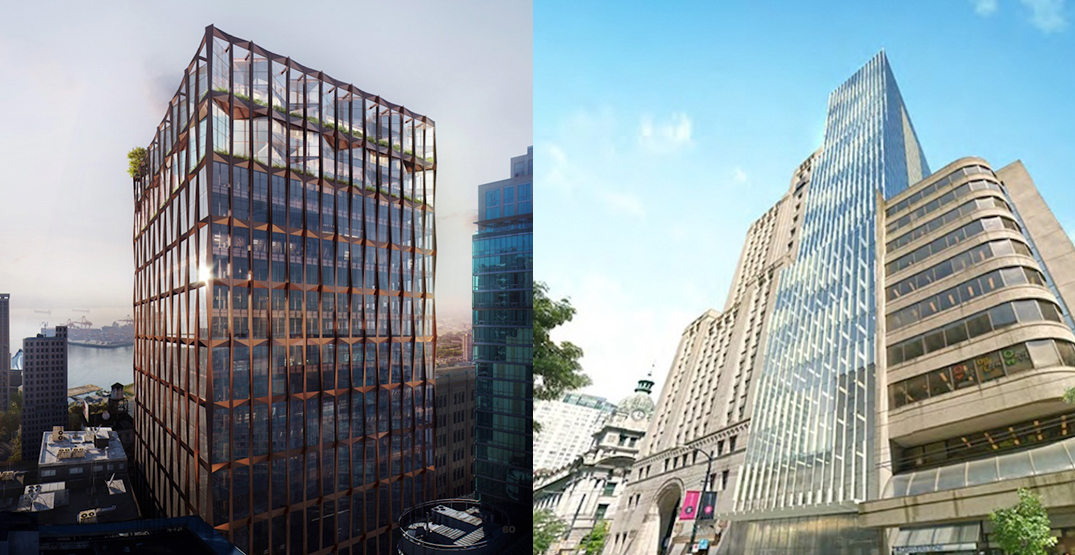 Local developer Reliance Properties will build a 338-ft-tall, 29-storey office tower at the northwest corner of the intersection of West Pender Street and Seymour Street, replacing a six-storey parkade built in 1969.

Construction will cost between $175 million and $200 million, with 60 to 80 people employed in detailed engineering and design, and 200 to 250 people in the years-long construction period. Upon completion in 2025, it will provide workspace for between 1,600 and 2,200 people. 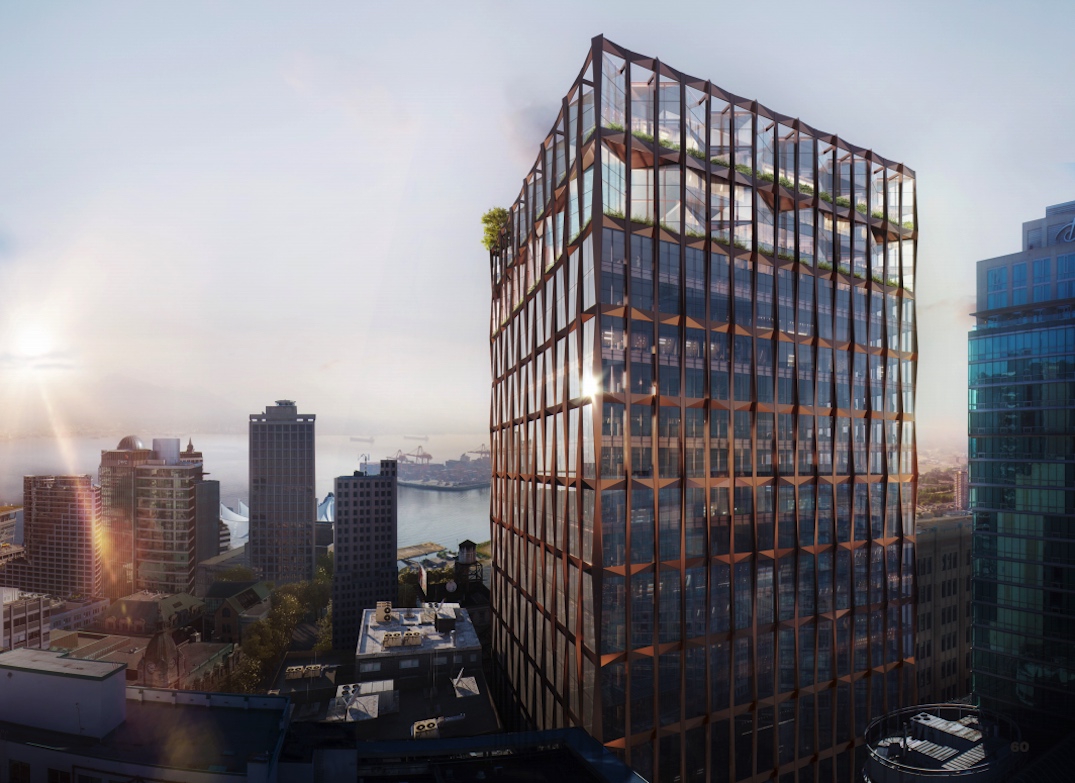 Tenants will have access to a unique workplace amenity on the 28th floor — a 10,000-sq-ft space with a swimming pool, hot tub, spa, large fitness gym, and fitness studios. An additional 6,300-sq-ft lounge-like amenity space is located on the 29th floor, along with an expansive outdoor rooftop amenity deck one level up.

The application, designed by Kohn Pedersen Fox Architects and Chris Dikeakos Architects, was submitted in November 2019. 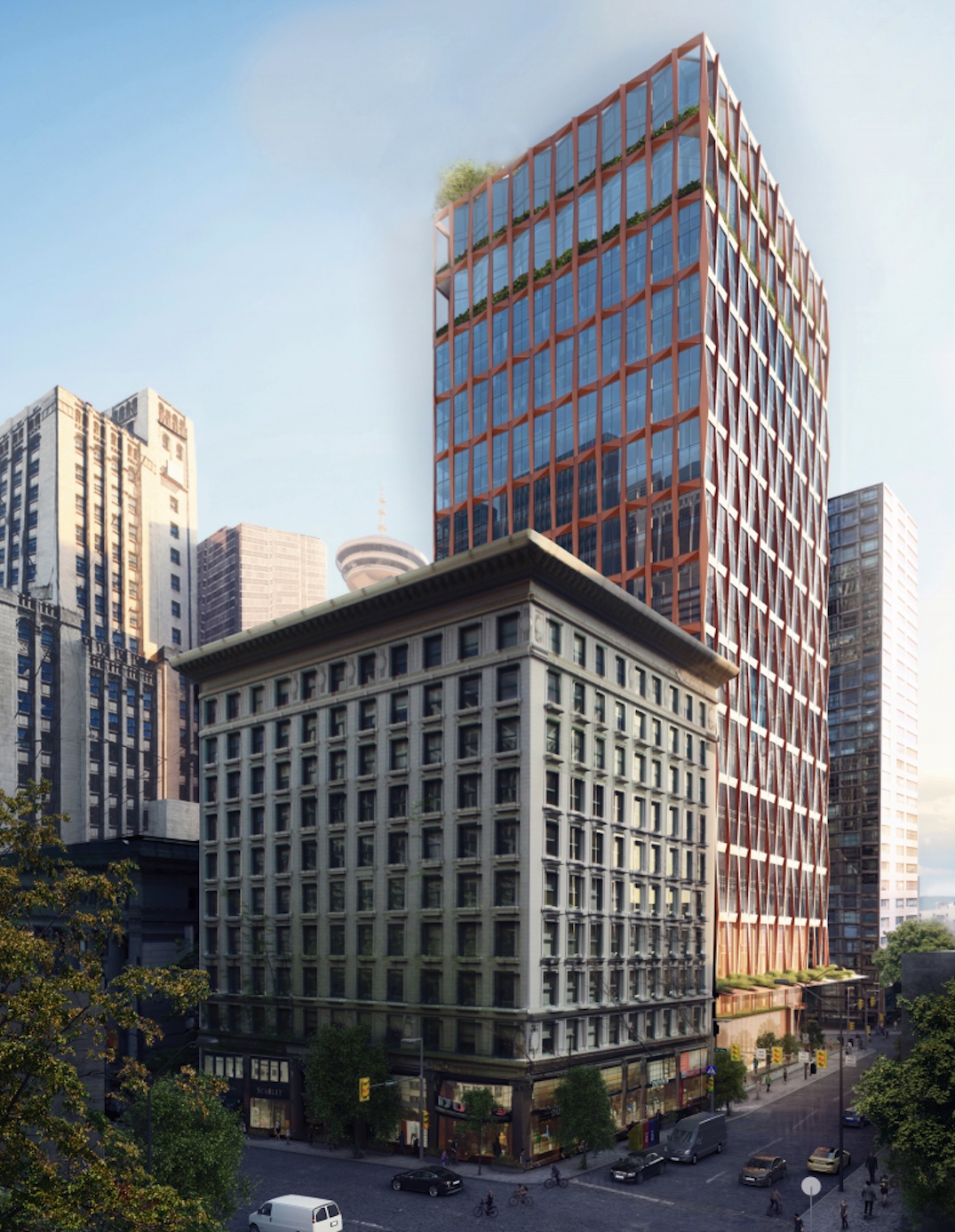 “The inspiration behind the building is to weave together elements of nature with elements of architecture to create an oasis in the city. The facade is made up of framed elements that fold in two directions to create a weave effect. The materiality is thought of as a shiny warm metal that reflects light and adds unexpected color to its surroundings,” reads the architect’s design rationale, adding that a warm metal tone frame is envisioned for the facade.

“While the glass in the main tower is flat, at the bottom and the top of the building, the glass starts to fold in plan to open up areas for views into retail and amenity, respectively.” 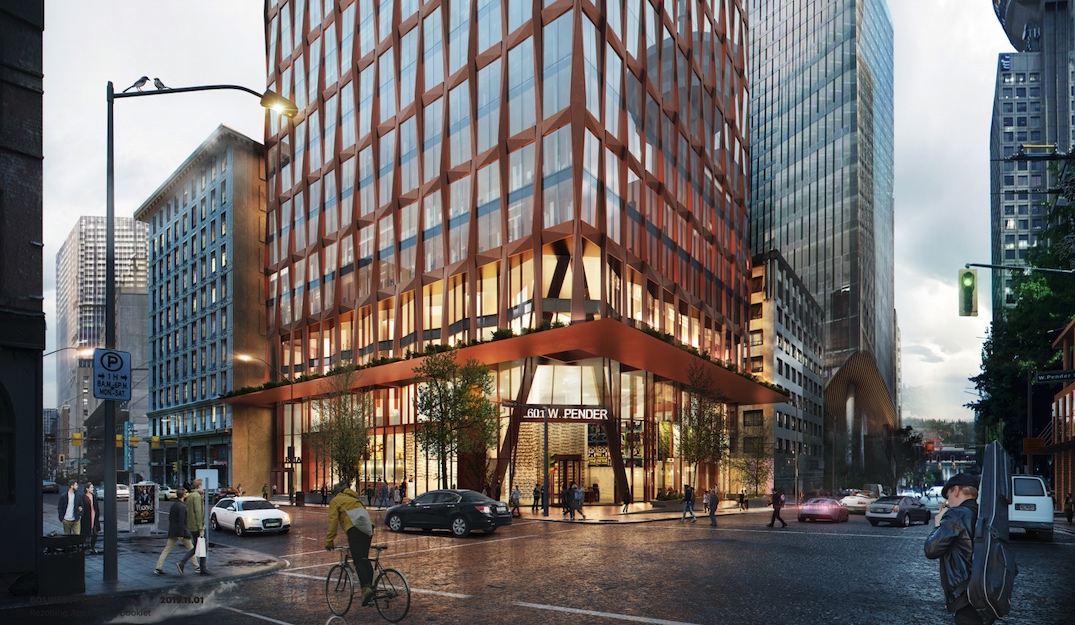 The redevelopment promises to re-establish the pink motif on the tower’s lower level walls facing the laneway, along with other features that enhance the “sense of place” such as a retractable roof scrim suspended high above the alley as a cover for events held in the laneway. Catenary lighting suspended over this space is also another option.

It is a tight fit — a 330-ft-tall, 28-storey office tower squeezed into a 6,242-sq-ft vacant lot with a street frontage of just 52 ft. The architectural firm behind the design is Musson Cattell Mackey Partnership. 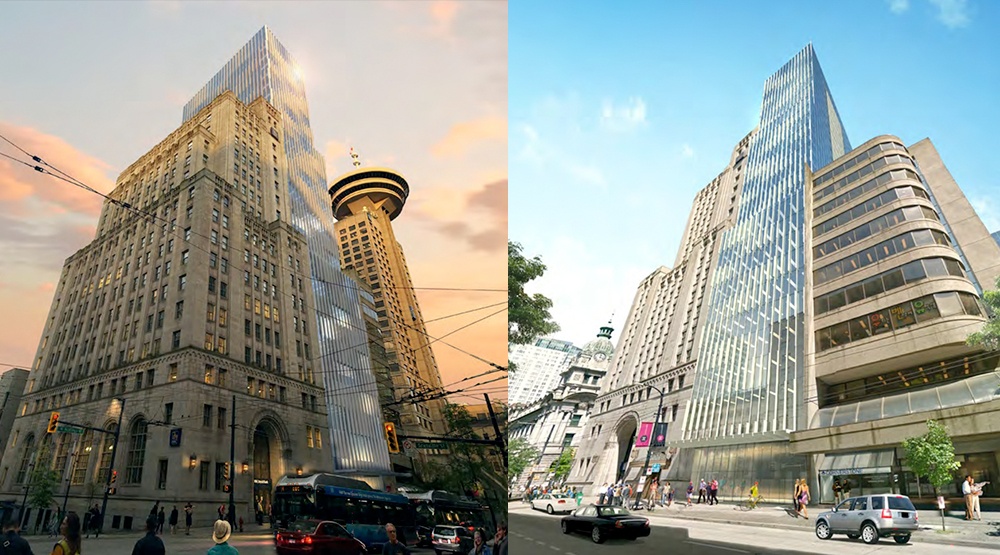 The construction cost is estimated between $80 million and $90 million. Its small floor plates ranging from 5,400 sq. ft. to 6,100 sq. ft., suitable for smaller sized businesses, will be able to host up to 500 office workers.

Due to the site’s narrow width, just 54 vehicle parking stalls will be accommodated within five underground levels, accessible only by a pair of car elevators. 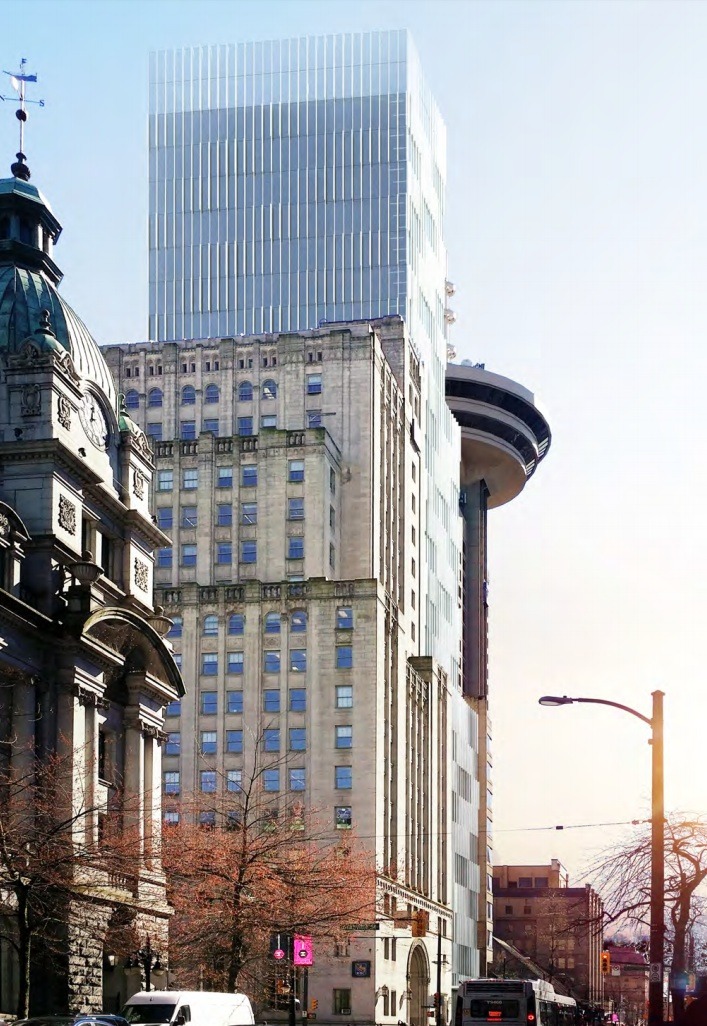 This is a relatively small project, but it will have an immensely positive impact on its immediate neighbour to the west — the 1931-built Royal Bank Building.

Significant seismic upgrades will be performed to the A-listed heritage structure by physically attaching the east facade of the heritage building to the new tower — by installing a series of steel plates into the floors of the Royal Bank Building that are linked to the new structure, effectively creating a structural system wherein the new building supports the old building.

A “light well” between the old and new towers will provide natural light and air for office workers. Heliostat mirrors installed on the rooftops of the Royal Bank Building and the new office tower will make precise movements to adjust the mechanism’s position, in order to follow the sun’s path to reflect light into this well. A LEED Platinum green building certification is targeted.