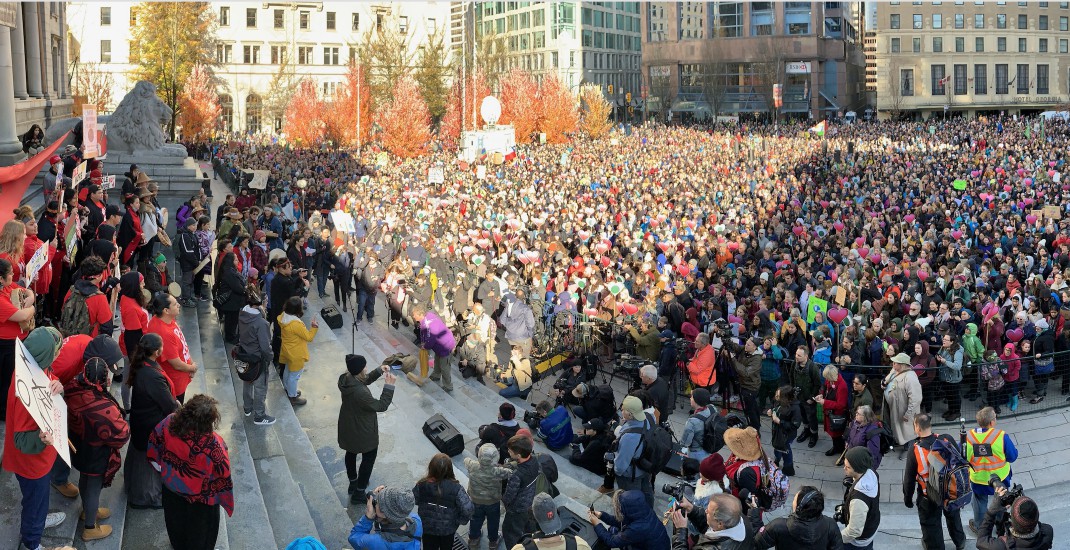 The Vancouver Police Department (VPD) estimates 8,000 people are currently taking to the streets of downtown Vancouver to march in a climate protest alongside teen climate activist Greta Thunberg.

Traffic is currently shut down on Georgia between Richards and Hornby Street.

#ClimateStrikeVancouver participants are back on the move. Their plan is to march through downtown, then head back to #VanArtGallery. There are now about 8,000 people marching. #VanTraffic

The march began this morning with an estimated 5,000 in attendance. Due to the sheer volume of participants, the Vancouver Police Department (VPD) said earlier today that “major delays” were expected in the downtown core.

#ClimateStrikeVancouver has started marching south on Hornby Street from #VanArtGallery. Approximately 5,000 people are now marching, and others are expected to join in along the route. #VanTraffic

Crowds gathered at the Vancouver Art Gallery before taking to the streets for speeches outlining the “important next steps for climate strikers across Canada.”

A group of Canadian youth were also in attendance, announcing their decision to file a lawsuit against the federal government for what they say is the government’s contribution to “dangerous climate change.”

After this afternoon’s march, the crowds will head back to the Vancouver Art Gallery where Thunberg will speak.

The rally was organized by Sustainabiliteens Vancouver.

The rally will close with a speech from Thunberg, who has become a household name for leading the global climate school strike movement.